What are CFast cards?

CFast memory cards are a relatively new innovation in the memory card industry.  Based on the Serial ATA Gen III interface, CFast 2.0™ cards offer significantly faster potential speeds when writing to the card — an important factor in a camera’s shooting performance.  And, their read speeds mean that with an appropriate CFast card reader, download times to a computer can be significantly reduced as well.

CFast 2.0™ cards are based on standards developed by the CompactFlash Association.  One benefit is that like CF cards, the CFast cards are an open standard — they’re not limited to any one card manufacturer.  So Canon customers who may consider investing in CFast 2.0™ cards can choose from various card-makers, and not be forced to buy from just one.  And, CFast is definitely not a card type that’s unique to Canon alone.

Actual write and read speeds will vary, depending on the host device and the card in question. Write speeds can be distinctly different on specific cards than read speeds may be. But in general, Canon engineers expect CFast card performance to generally be at least 3x faster than what was possible with UDMA 7-compliant CompactFlash cards.

CFast cards may look like traditional CF cards — in fact, their dimensions are within 1mm in height, width and depth — but their contacts are entirely different, and they most assuredly are not compatible with one another. In other words, you can’t put one type of card into a card slot designed for the other. 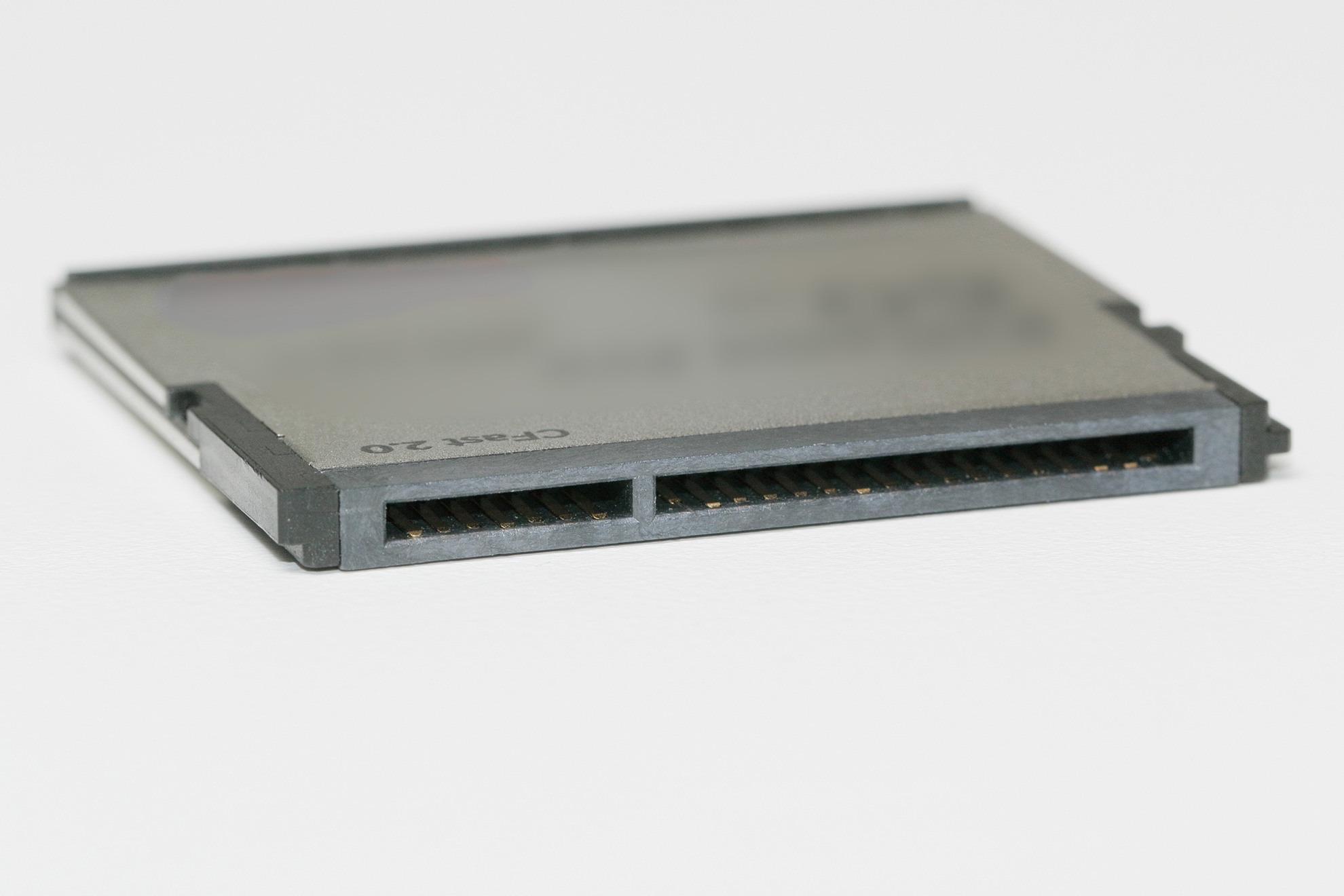 CFast 2.0 ™ cards look very similar to the CompactFlash (CF) cards which digital SLR users have worked with for years. But their electrical contacts are totally different, and they are not interchangeable with CF cards — neither can be inserted into a card slot intended for the other type.

What about earlier CFast cards?

EOS-1D X Mark II is optimized for the newer CFast 2.0™ card standard, and Canon recommends that if you use CFast cards, that they be identified as CFast 2.0™ compatible.

Canon engineers know that many users (both individual users, as well as photo organizations) may have made large investments over the years in both traditional CompactFlash cards, and CF-based peripheral accessories. And, workflows may be based on years of CF card experience. For these reasons, Canon has not abandoned the traditional CF card with the launch of the EOS-1D X Mark II.

At the same time, significant performance benefits beckon with a change to the higher-speed CFast 2.0™ memory cards. Accordingly, the EOS-1D X Mark II has two memory card slots — slot 1 is exclusively for traditional CF cards, and slot 2 is solely for CFast cards. 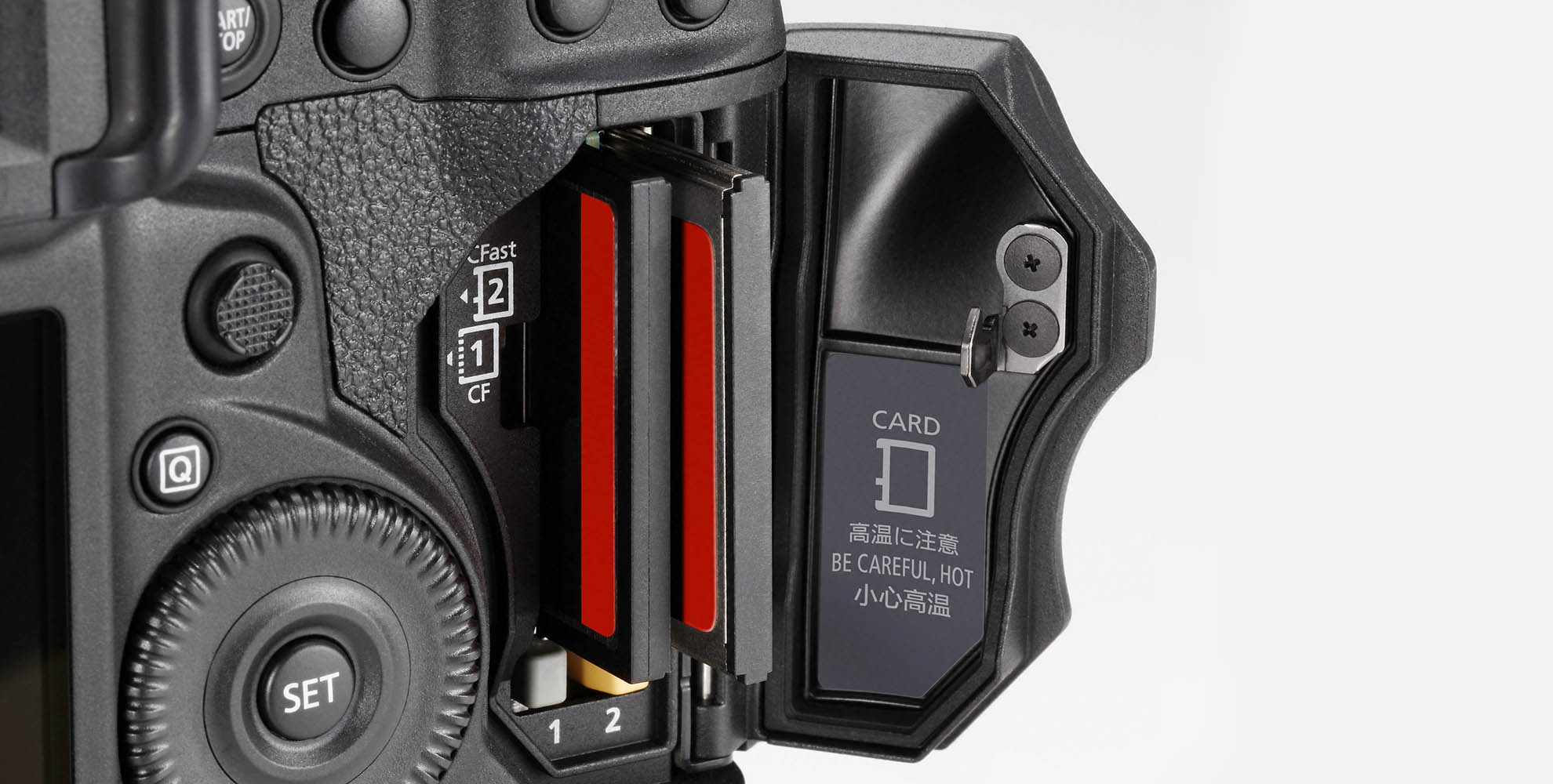 EOS-1D X Mark II has two card slots, one each for CF and for CFast 2.0 ™ memory cards. The card release button for slot #2 (the CFast card slot) is orange, to help distinguish it from the CF card slot. Canon recommends CFast cards compatible with the CFast 2.0 ™ card standard, regardless of the card’s manufacturer.

Canon users are free to use both types of cards at the same time (each in their appropriate card slot), or use just one or the other. The same type of multiple card management is possible on the EOS-1D X Mark II’s set-up menu that has appeared on prior Canon EOS cameras that accepted two memory cards, allowing any of the following:

Standard:
Record to one slot only, even if two cards are installed (user defines which card in the “Record/play” menu item, immediately below the Record function menu choice)

Auto Switch Card:
Record to one card; if that card fills up, recording immediately switches to other card

Record Separately:
Choose any two types of still images (among the RAW and JPEG choices), and record one to one card, another to the 2nd card slot. 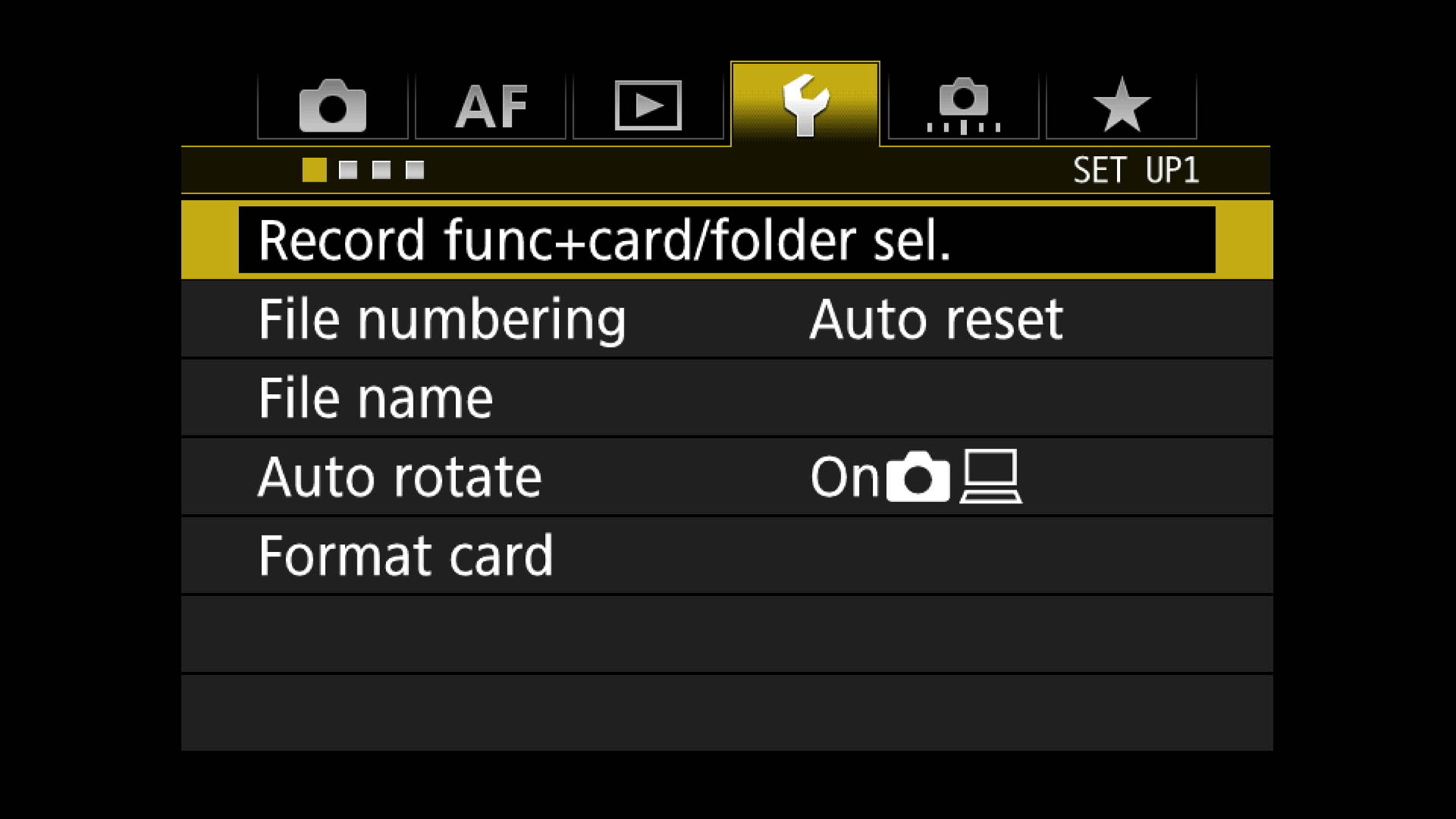 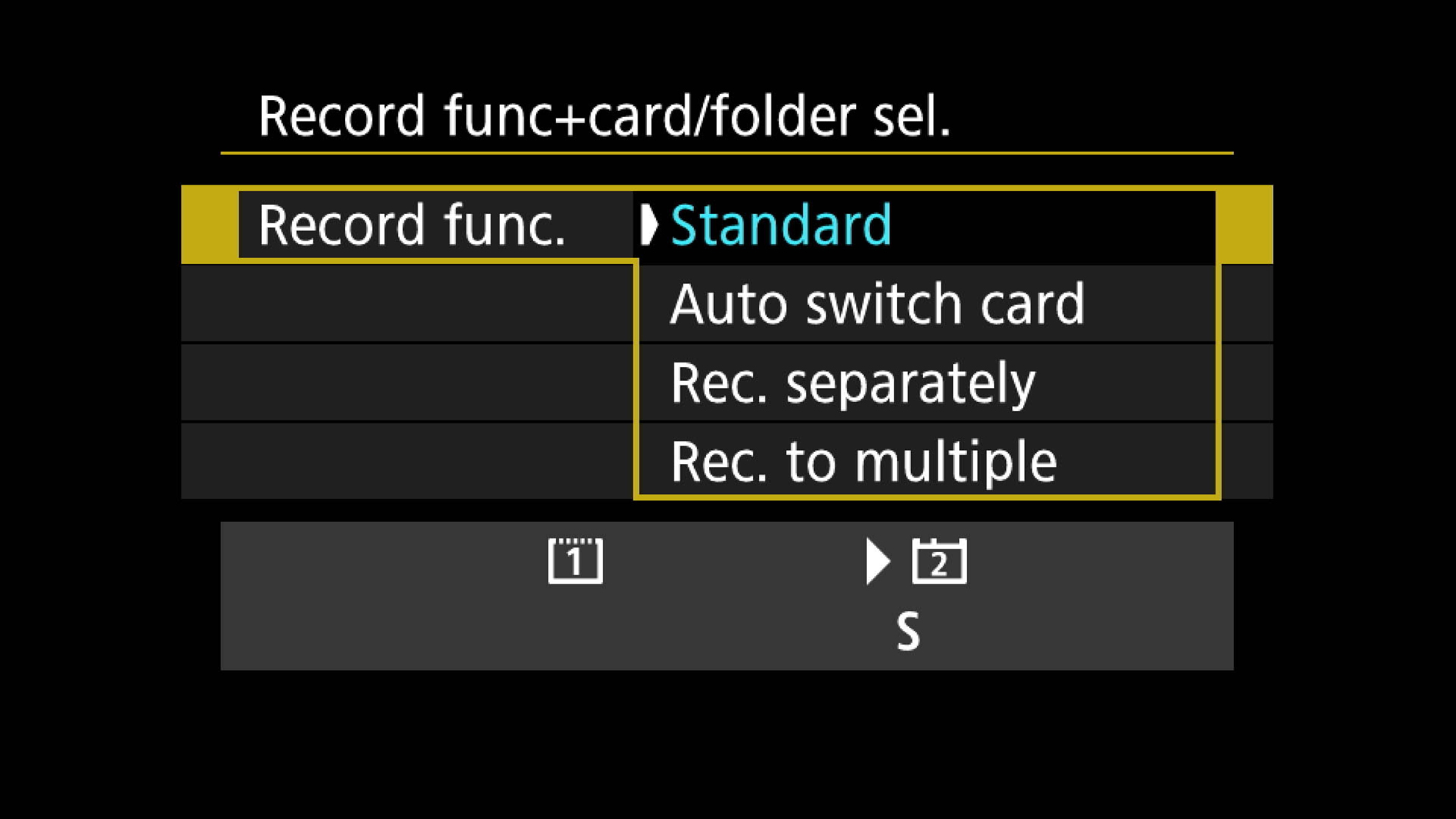 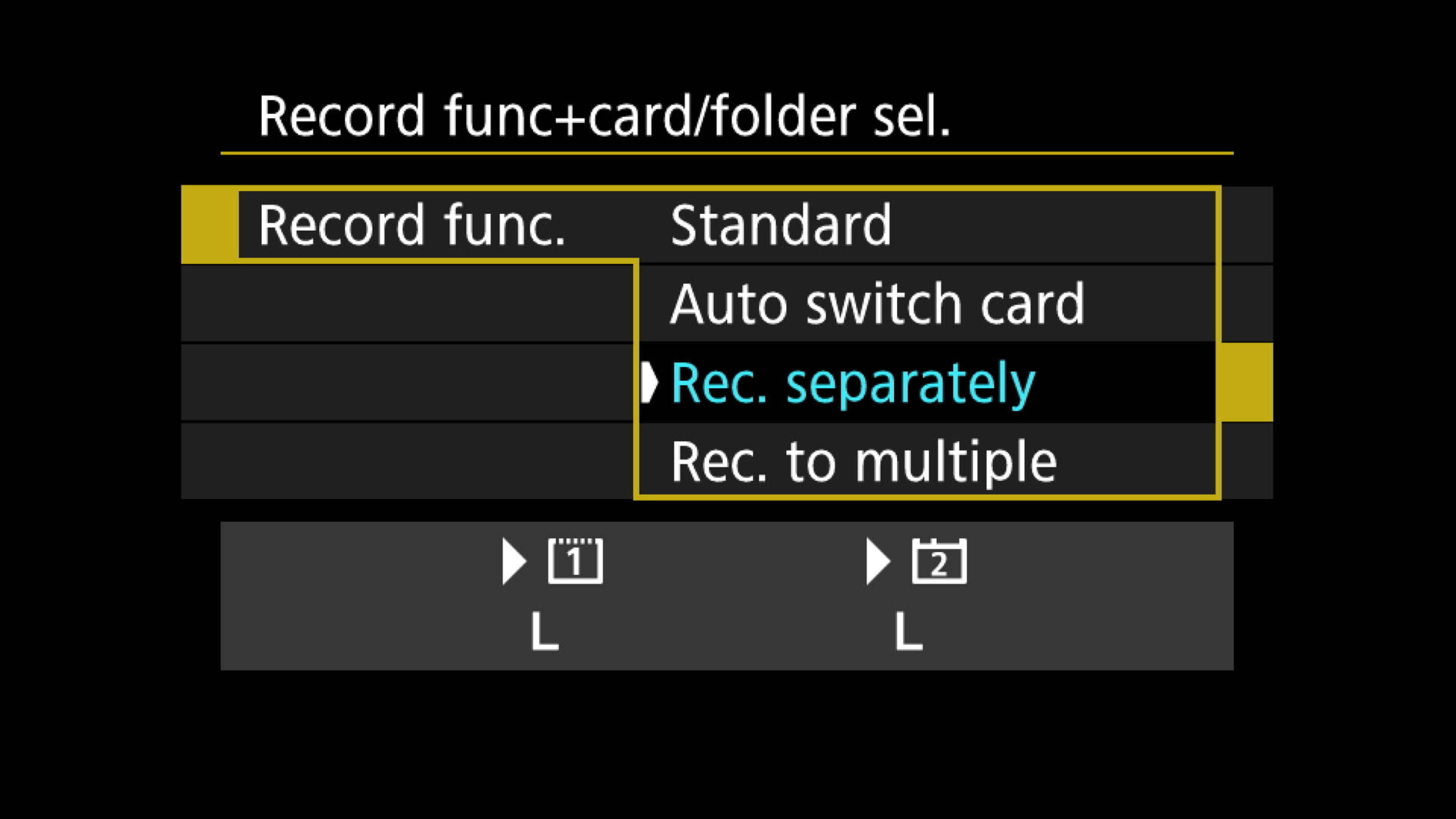 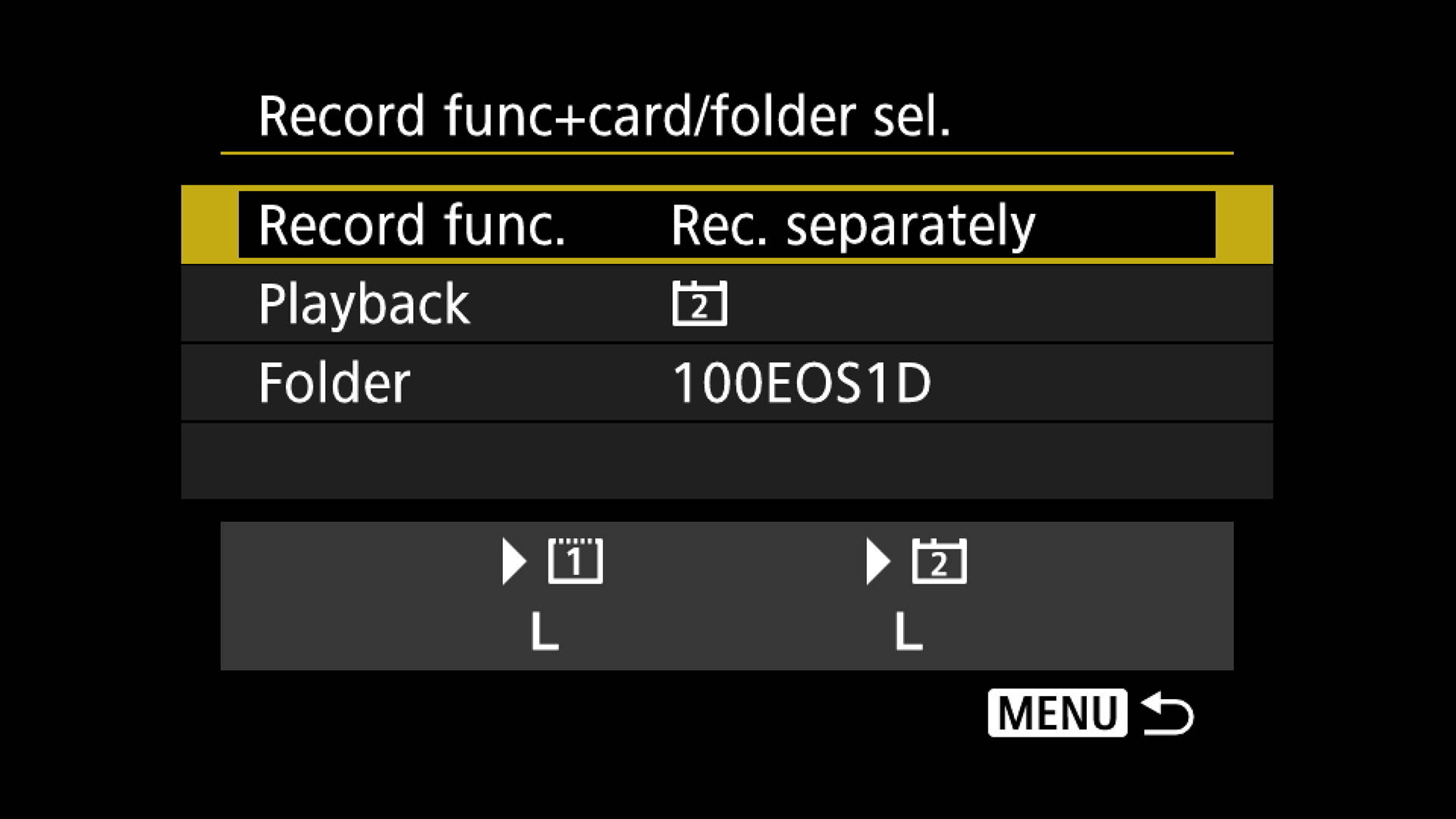 One important note: as we’ve hopefully made clear up to now, there are significant potential performance benefits to be had with CFast 2.0™ type cards. EOS-1D X Mark II shooters are free to use both a CF and CFast 2.0™ card at the same time, but if you set the camera to record simultaneously to both (either “Record Separately” or “Record to multiple” settings, described immediately above), the camera has to slow down to meet the performance of the CF card. In other words, users who demand the full performance benefits offered by CFast 2.0™ cards will need to set the camera so that they’re recording to the CFast slot exclusively.

As mentioned above, the card sizes, and especially their contacts, are different… so the slots are exclusive for the intended card type. And, at least for now, there are no plans for Canon’s service department to offer changes to the card slots on the EOS-1D X Mark II.

One final note, for CFast 2.0™ card newcomers: when inserting a CFast 2.0™ card into card slot 2 on the EOS-1D X Mark II, you want to make sure the card label is facing away from you as you insert it. This is different than Canon’s traditional handling of CF cards, where the card maker’s label and logo normally face toward the user as he or she puts the card into the card slot.

EOS-1D X Mark II’s top shooting speed of 14 fps, whether you’re shooting RAW or JPEG images, is unaffected by the type of memory card in use. But it plays a big difference in burst rate — that is, how many consecutive shots can you take in one burst, before the camera’s internal buffer memory fills, and the camera must slow down to write image data to the memory card. With RAW images in particular, this becomes a significant concern at shooting speeds like 14 fps. (Full-resolution RAW files on the EOS-1D X Mark II average about 23MB each in file size.)

Burst rate is especially significant for wildlife and sports shooters, who may want to fire long continuous bursts in action situations, with the assurance that the camera won’t grind to a near-halt after about 3 or 4 seconds. EOS-1D X Mark II has made some significant enhancements to burst rate, even if you use traditional CF cards:

Note that if you shoot full-resolution JPEG images in-camera, the burst rate with the EOS-1D X Mark II is essentially unlimited, even with UDMA 7-type CF cards… processing and data throughput are fast enough that you can shoot continuously, until the card is full.

But if you’re a RAW image shooter, there’s little doubt that in any situation where you may want to really take advantage of this camera’s 14 fps (16 fps in Live View) top speed, using a CFast 2.0™ memory card will open the door to some tremendous burst potential.

For video shooters, the potential performance benefits from CFast cards are even more apparent. EOS-1D X Mark II allows 4K video recording to a memory card in the camera (no external recorder required), and 4K can be at speeds up to 60 fps. Understandably, that’s a lot of data to be continually pushing through the processor and writing to the memory card! Here’s a ballpark idea of movie bit rates and file sizes for some of the camera’s video settings:

CFast 2.0™ cards are pretty much required for 4K shooting at 60 or 50 fps — the camera will likely stop recording after a few seconds at these settings if you try to record onto CF cards.

CompactFlash cards, especially if they’re compliant with the faster UDMA 7 specs, should be reliable for Full HD at more common 60/50 fps, as well as 30, 25, and 24 fps recording speeds.

One of the hallmarks of the EOS-1D series has always been performance, and there’s never been a stronger performer than the EOS-1D X Mark II. Card speed may once have been a bit of a bottleneck in performance for some shooters, but the addition of CFast 2.0™ card compatibility pretty much eliminates those problems. If you’re either a video shooter looking to really take advantage of high frame rate recording and/or 4K video, or if you’re a high-performance still shooter who wants to combine RAW image quality with outstanding shooting speed, CFast 2.0™ memory cards transform this camera’s capabilities, and push them beyond anything previously possible with a Canon EOS digital SLR.

There’s no mandatory requirement that every EOS-1D X Mark II owner invest in new cards, card readers, and more. The camera remains completely compatible with CompactFlash cards, taking advantage of card speeds up to UDMA 7 (as mentioned earlier, RAW burst rate has virtually doubled vs. the previous EOS-1D X camera when using UDMA 7 CompactFlash cards), so anyone whose needs aren’t quite as robust should find the CF alternative to be entirely workable, as well.

*Canon is an authorized licensee of the CFast 2.0™ trademark, which may be registered in various jurisdictions.