Post-Production Brief with the EOS C200

As discussed in the previous Production Brief with EOS C200, the EOS C200 and EOS C200B are exciting cameras with a huge feature set, designed to improve the production experience. However, Canon realizes that on-set production is just one part of the overall production environment. This is why a lot of thought was also put into the post-production end of the chain as well.

The post-production team can expect to receive one (or more) of the three different formats from the EOS C200. Below, I have built a helpful chart displaying the possible formats you could receive with the system frequency in 59.94Hz mode.

In this article we are going to cover important notes to keep in mind when working with these three main formats.

The .MP4 files created by the EOS C200 are actually H.264 encoded MPEG-4 AVC files. All .MP4 files from the EOS C200 are encoded at 4:2:0 8-bit sample no matter the frame rate or resolution. This makes for a lightweight and small footprint file that is ideal for long-form event work without the traditional storage demands of 4K and high frame rate content. These files are easily handled by not only most modern NLE systems, but also by most system players such as QuickTime® or Windows® Media Player. The .MP4 files can come in three different resolutions: FullHD 1920x1080, UltraHD 3840x2160, or 2K 2048x1080.

The FullHD 1920x1080 format allows for the camera’s highest frame rate capture of 120P. High-speed capture with the EOS C200 is done utilizing the Slow Motion Recording Mode, which allows for 120 frames per second to be captured, over a 23.98, 29.97, or 59.94 time base. Traditionally, this means no time interpretation is required in post-production to achieve the slow motion playback.

The UltraHD 3840x2160 format allows for recordings of up to 60P and will most likely be the chosen format for productions where hours of UHD coverage is needed but the infrastructure or technical requirements of the Cinema RAW Light workflow are not available.

Then, there is an important note when it comes to the 2K 2048x1080 option. This 2K file is only produced when the EOS C200 is set to capture in Cinema RAW Light. These 2K files are actually proxy recordings, or MP4 video files, that are recorded simultaneously with the Cinema RAW Light format. This workflow allows for offline editing to begin immediately without the need for an editing system that is capable of handling the intensive Cinema RAW Light format. These 2K files can even act as quick turnaround dailies. Since they are being captured simultaneously with the RAW Light, the moment the shoot is wrapped, there are lightweight, easily playable versions of your media ready to be viewed (with an optional LUT applied, if desired). The reason these files are 2048x1080 instead of 1920x1080 is simply to match the 17:9 aspect ration of the 4096x2160 RAW Light media.

At the time of publication of this article, the EOS C200 is shipping only with .MP4 and Cinema RAW Light formats. However, with a future firmware update the EOS C200 will gain the ability to record both UltraHD and FullHD to Canon’s purpose built XF-AVC codec inside of an .MXF OP-1A wrapper. This format will allow for an abundance of metadata to be captured to the file, and viewed using the Canon XF Utility software, as employed by cameras like the EOS C300 Mark II and EOS C700.

The most post-production intensive format in the camera is by far Cinema RAW Light. This lightweight version of the RAW format found in the EOS C700 allows for in-camera recording to high-speed CFast 2.0 cards. However, it is also important to note that there is no RAW output on the EOS C200, so internal recording of Cinema RAW Light is the only RAW option in the system. This is surely one of the most substantial developments of the EOS C200, and will be used heavily by productions with the traditional DIT or near-set offloading. The sheer amount of information captured when shooting Cinema RAW Light makes it tempting to anyone interested in top-tier and HDR delivery methods.

Cinema RAW Light requires a different post-production process than the traditional RAW workflow you may be accustomed to with the EOS C300 Mark II or EOS C700. Cinema RAW Light does not record in the frame-by-frame file structure of a traditional RAW format. Instead, using a proprietary format developed by Canon, the RAW information is compiled into a single Canon RAW Movie file, or .CRM.

Once a Canon RAW Movie is recorded, it then needs to be unpacked in one of two ways. The first and more traditional route would be utilizing an updated version of Canon’s RAW Development Software. At its core, this software allows for the unpacking, modification, and debayering of Cinema RAW Light files. Modification is the key phrase here, as we have the opportunity to modify the parameters by which our footage is debayered. EOS C200 captures its RAW information in a proprietary RAW Gamut and RAW Gamma. This data needs to be taken from their RAW spaces, and conformed into one of the many gamma curves or color spaces to begin the post-production process. The footage from the EOS C200 can be conformed into a wide range of spaces, from Cinema Gamut down to BT.709, and from Canon Log 2 to Wide DR. The choice is yours and dependent on the amount of post-production resources you’re planning to allocate. However, if you are shooting in the RAW format presumably you’re going to want to take full advantage of the information captured utilizing a combination of Canon Log 2 and Cinema Gamut. This Canon Log 2 and Cinema Gamut combination is the most ideal starting point for an HDR workflow, providing the full 15 stop dynamic range the sensor has to offer, as well as the widest range of encoded colors. 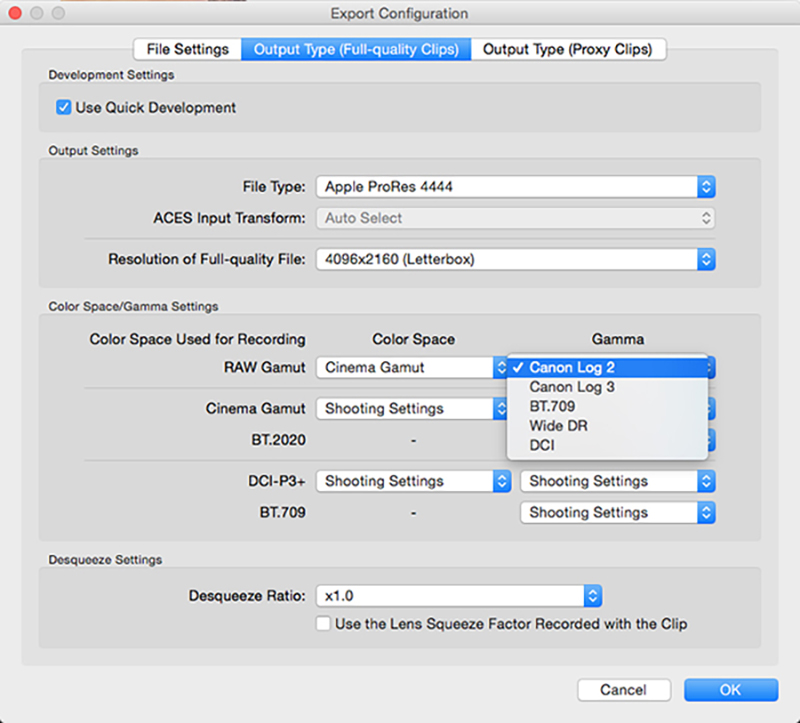 Cinema RAW Development can transcode RAW Light into a variety of different file types as well. Apple® ProRes 4444 is one of the most popular choices, but both 10- and 16-bit DPX flavors are also available, allowing for another option when integrating into standard color grading software.

In addition to DPX and ProRes, OpenEXR is the ideal option for working within the ACES workflow. When exporting to OpenEXR, Cinema RAW Developer has the ability to apply the proper ACES IDT to the debayer, providing you with a simple and clean ACES ready workflow.

However, for those with systems powerful enough to handle live debayer and edit, Canon will be releasing plug-ins for Avid® Media Composer®, as well as other popular NLE and grading softwares, to accept Canon RAW Media files natively. This will allow the .CRM files to be ingested into the NLE’s as if it was any other standard codec, with a few main differences.

Imagine a world where we can shoot 12-bit high data rate media, ingest it into our NLE, and be able to change key factors on the fly such as white balance or color space. This is where Cinema RAW Light becomes more than a codec, and instead a malleable format within your NLE that allows for seamless creation of different compliant passes easier than ever before. With the abundance of metadata available as well, it’s a dream for heavy VFX workflow.

The EOS C200 is sure to empower professionals with its data rich imagery as well as push filmmakers into new and higher-level concepts and workflows they may have otherwise never dealt with. From large-scale productions to multi-camera event coverage, EOS C200 media is sure to show up in all kinds of post-production suites.