HDR of stick fishermen near the city of Galle 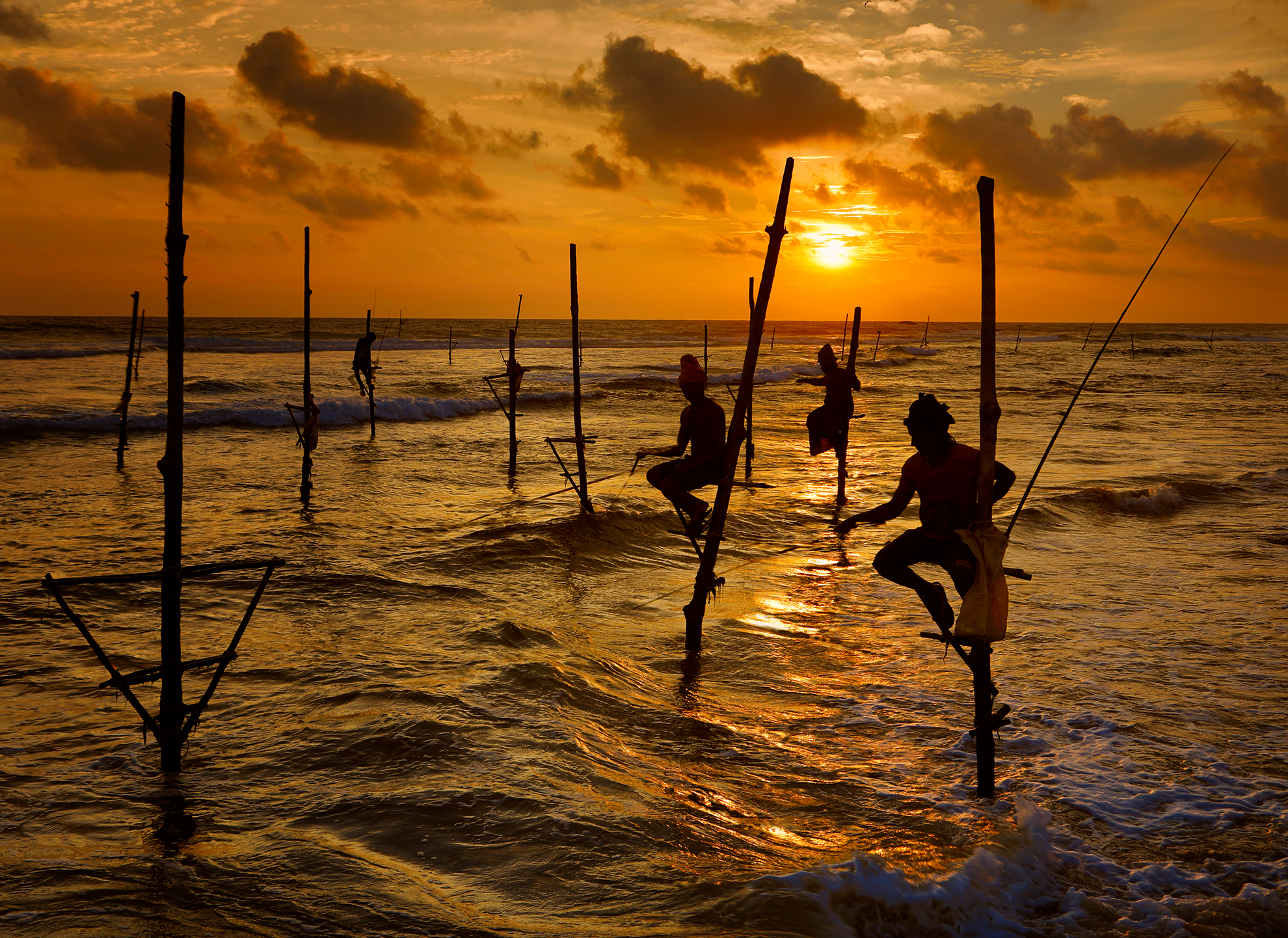 Photography is more than just taking, or as I say, making, a picture. It’s about the entire photographic process (image capture and image processing) and the personal experience.

In this article I’ll share with you some of my favorite photographs and experiences from my recent trip to Sri Lanka – a magical destination – documented with my Canon EOS 5D Mark IV.

The photograph of Sri Lanka stick fishermen near the city of Galle that opens this article is my favorite image from this sojourn. It’s an in-camera, HDR image, with the Ev set at 0, +2, -2, and the Effect set at Art Vivid – for an even more dramatic image. HDR was needed due to the strong contrast range (between the setting sun and the water) in the scene. 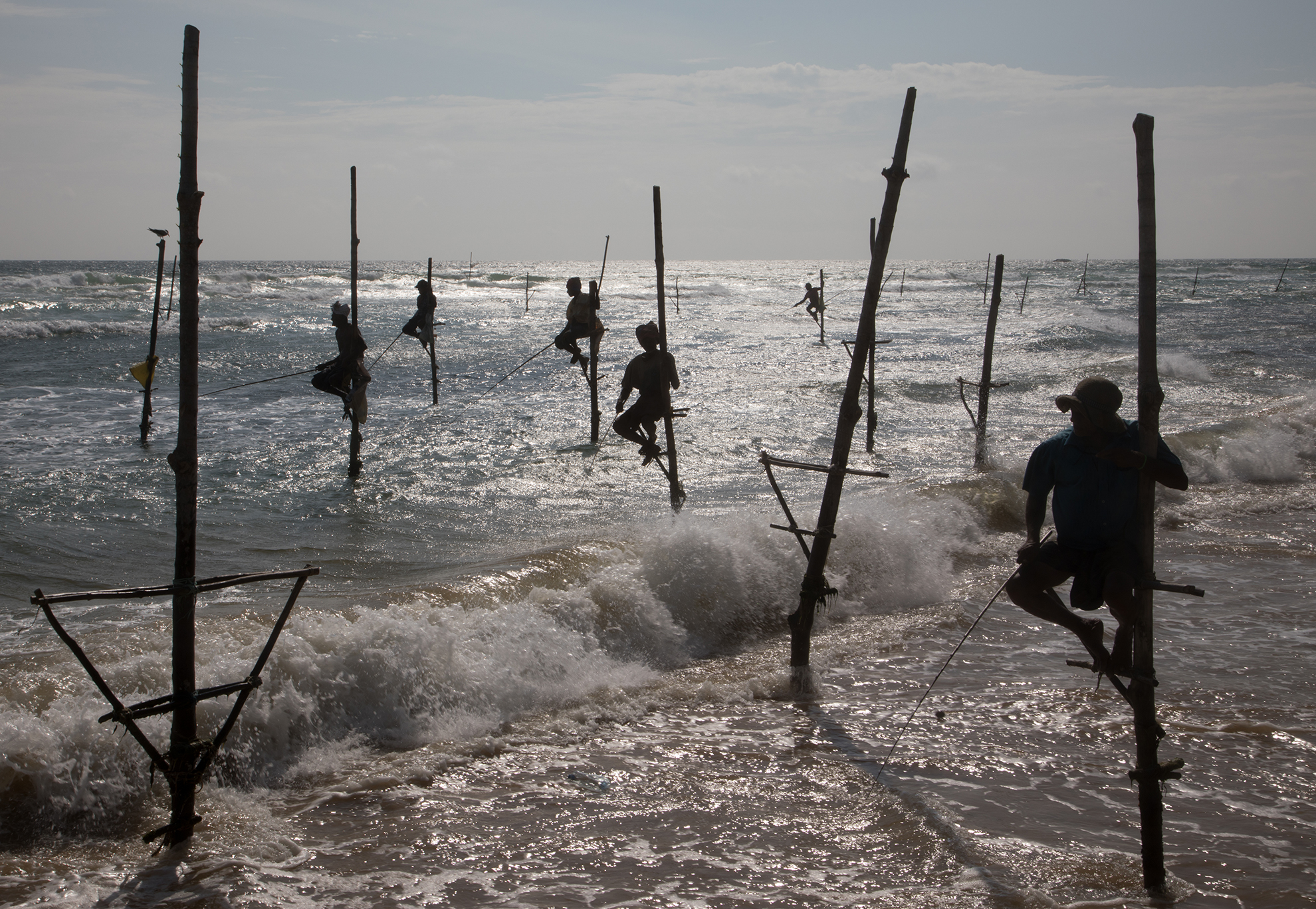 I planned the opening image after taking this photograph of the fishermen earlier in the day. It’s an OK image, one that tells a different story. I include it here to illustrate an important point: in photography, it’s often all about the light. 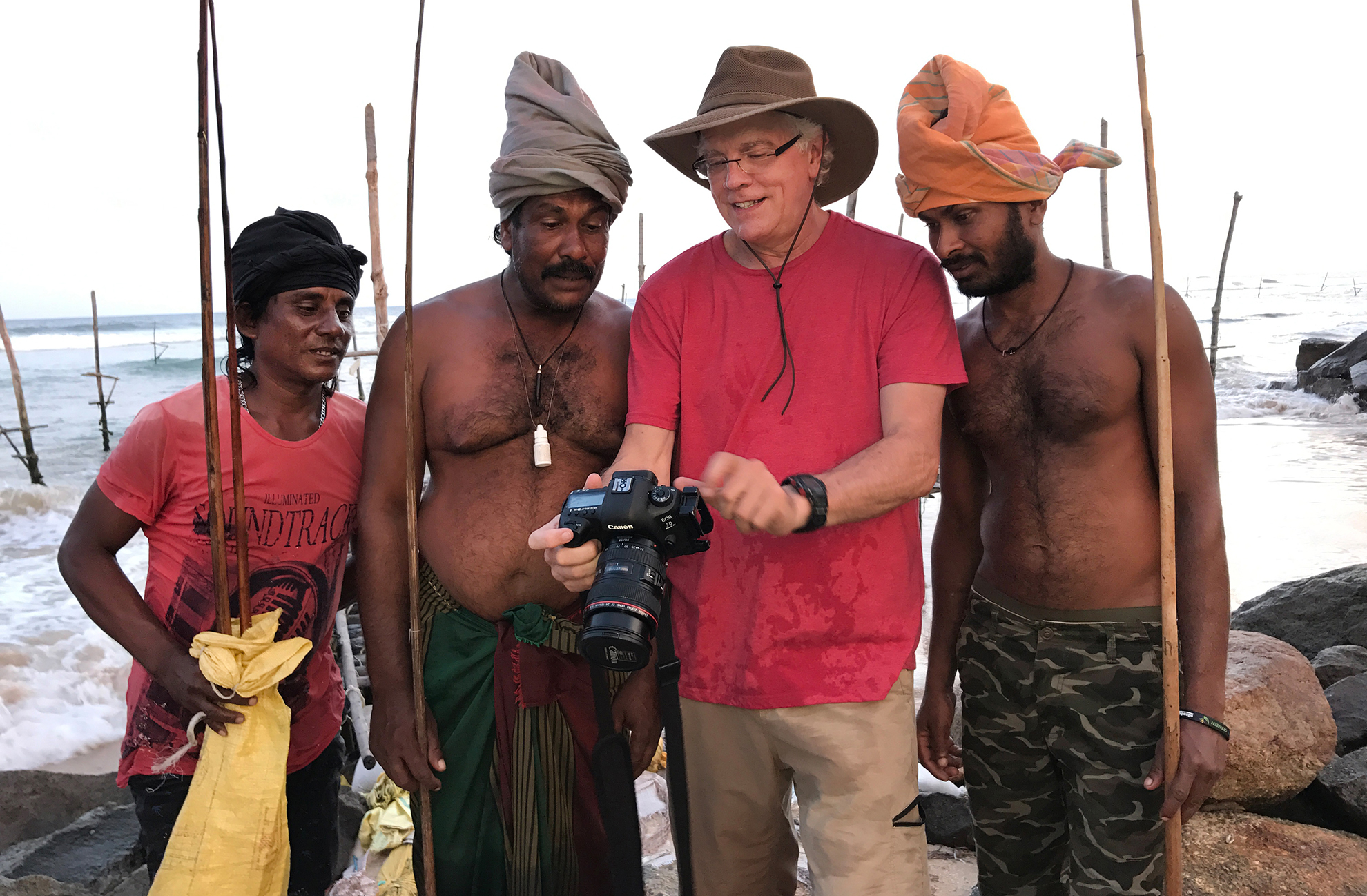 About the experience: these stick fishermen made the photo session fun, as I tried to make it for them. So my advice for photographers is this: Make it fun for everyone and you will have a more memorable experience. Also, share your pictures with your subjects. Here I am showing the fishermen – using the flip-though feature and pinch-zoom feature on the camera’s touchscreen – my photographs from the photo session. 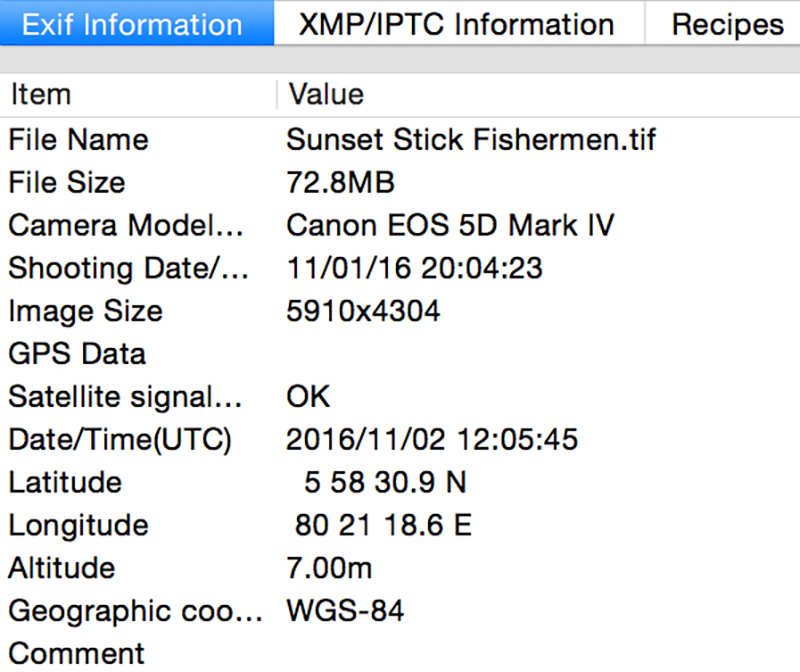 Speaking of sharing, the 5D Mark IV has built-in Wi-Fi®, Bluetooth and GPS. So, if you have the Canon Connect smartphone app, you can send your photos and GPS info, as I did in the image above, to your phone so you can share instantly on social media. And with the GPS feature, you can find and share exactly where you took a photograph, which is important when you need to accurately note and share a location. 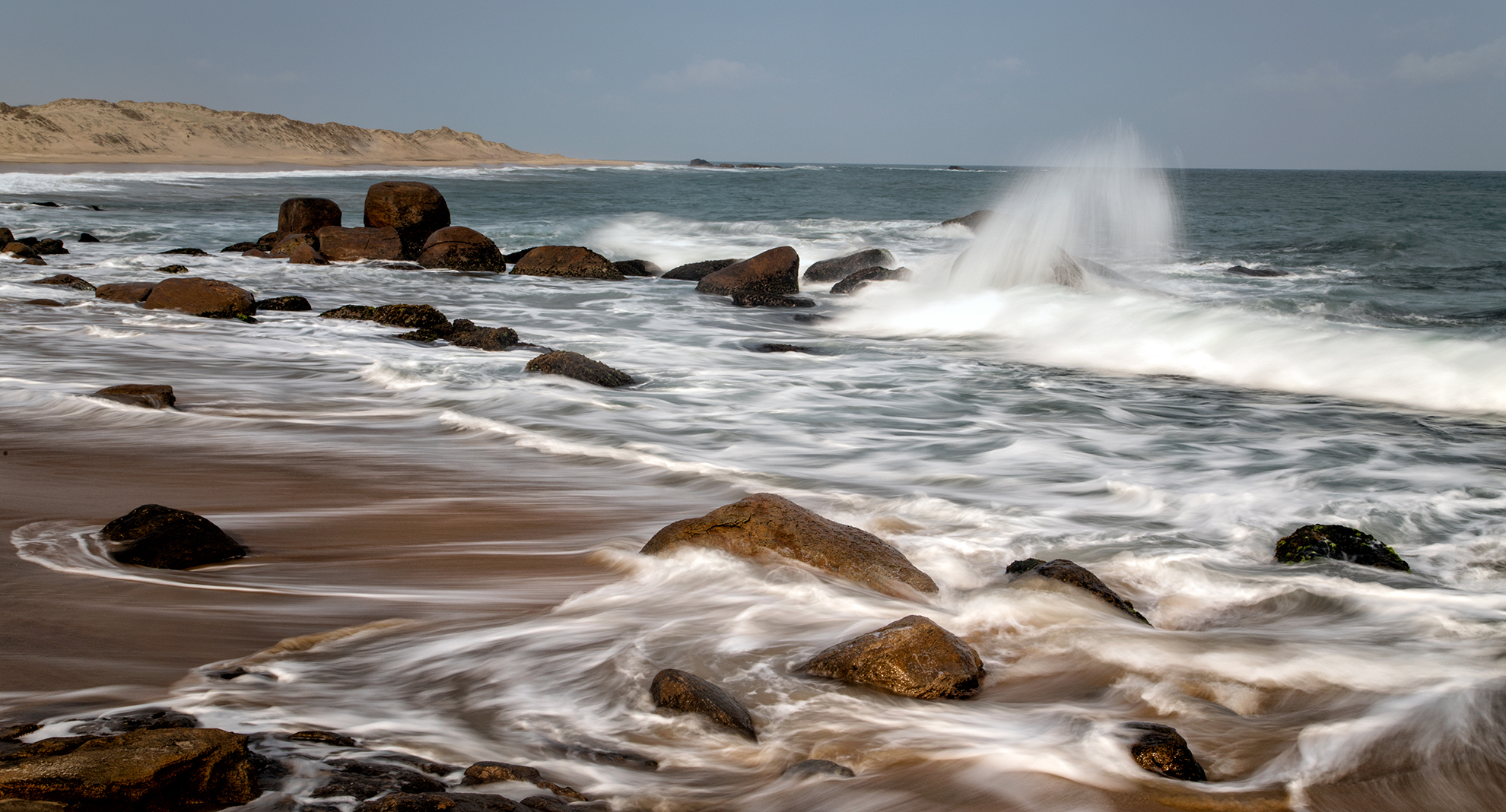 Sri Lanka is known for its beautiful beaches. To capture the beauty of the ebb and flow of the waves on Kirinda Beach, I used a shutter speed of 0.4 seconds. To get a slow shutter speed, I set the ISO to 100 and aperture to f/22, and then used an 8-stop ND (neutral density) filter, which was necessary in the bright sunlight.

To ensure that the highlights (white part of the waves) were not overexposed, I activated the camera’s Highlight Alert feature. To capture the subtle differences in the flowing water, I set the Drive mode to Continuous. 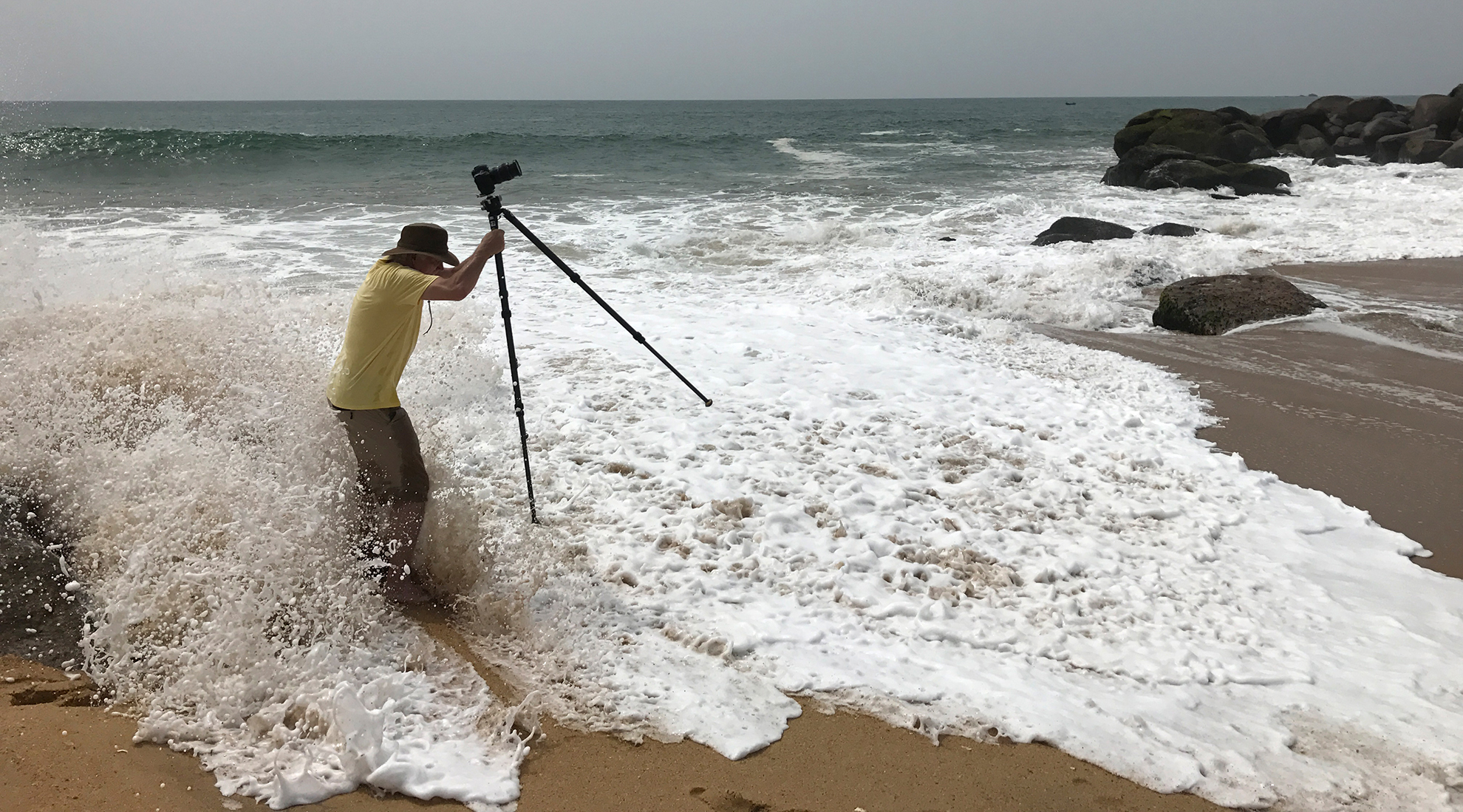 Quick tip: Never turn your back on the water! Just before my wife Susan took this photograph, I was checking my exposures and not watching the waves. Quick thinking and actions saved my Canon 5D Mark IV from getting swept away! Yes, the camera did get splashed a bit, but I was not worried, because the 5D Mark IV offers improved weather sealing. Still, I ran out of the water as fast as possible and gave my camera and lens a good wipe-down ASAP. 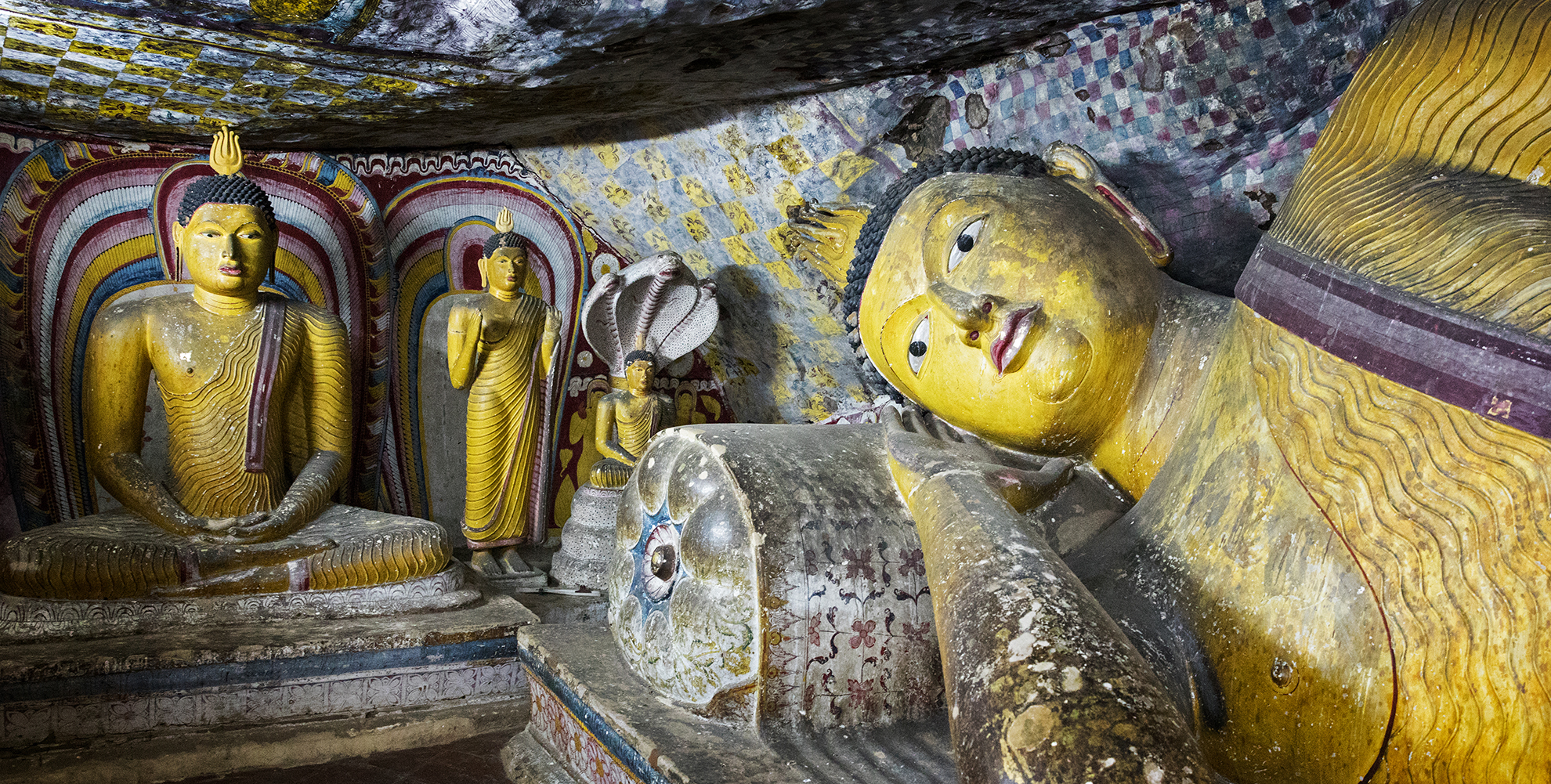 I took this hand-held photograph inside Dambulla Cave Temple (a World Heritage Site) at ISO 10000. That’s not a typo: ISO ten thousand it is! The clarity of the image is testament to the low-noise feature of the camera. To add a sense of depth to the image, I shot at an angle. Here I used my Canon EF24-70mm f/2.8L II USM lens set at f/4.5 @ 1/20th second – hand-held.

Personally, exploring these sacred caves, which date back to the first century B.C., gave me a tremendous appreciation for the craftsmanship of the statues and paintings on the walls and ceilings, as well as for the dedication of the artists to Lord Buddha. 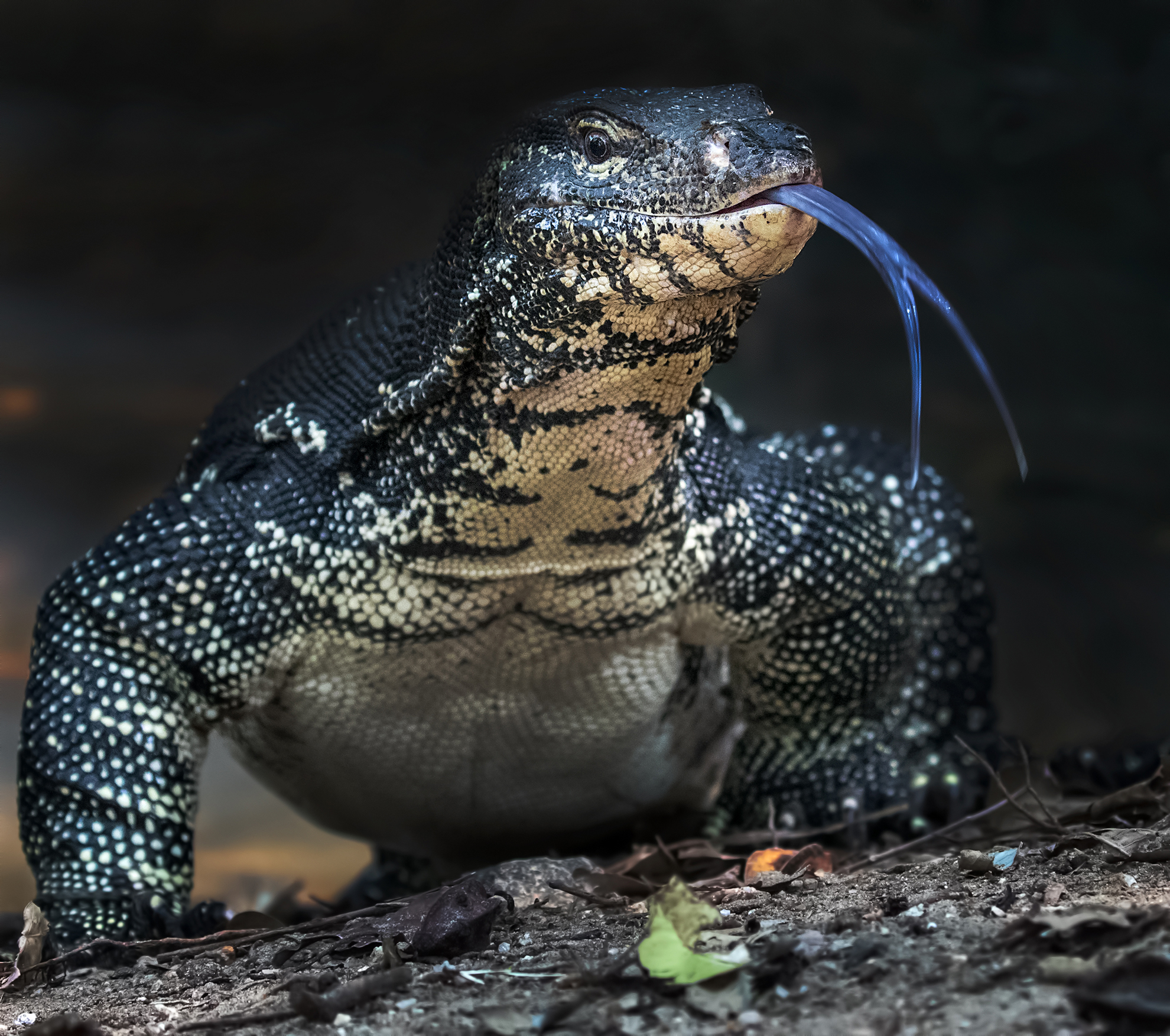 Capturing the peak of action required looking for, as well as anticipating it . . . as well as some luck. This photograph of a water monitor, photographed with my Canon EF100-400mm f/4.5-5.6L IS II USM set at 100mm, is the result of all of the above.

Notice that only the head of the water monitor is in sharp focus. The shallow depth of field draws more attention to the eyes and tongue. I achieved that goal by setting the focus point on the animal’s eye, and by setting my aperture to f/6.3.

Yes, the water monitor is poisonous. So after I took the picture, I dashed off to safety, living up to my reputation as the “shoot and scoot” photographer.

The next two pictures illustrate two points: One, when you encounter a good subject, a young girl in this case, take a portrait as well as an environmental portrait, that is, a picture of the subject in the environment. Two, the detail that is captured with the camera’s 30 MP, full frame image sensor is outstanding. 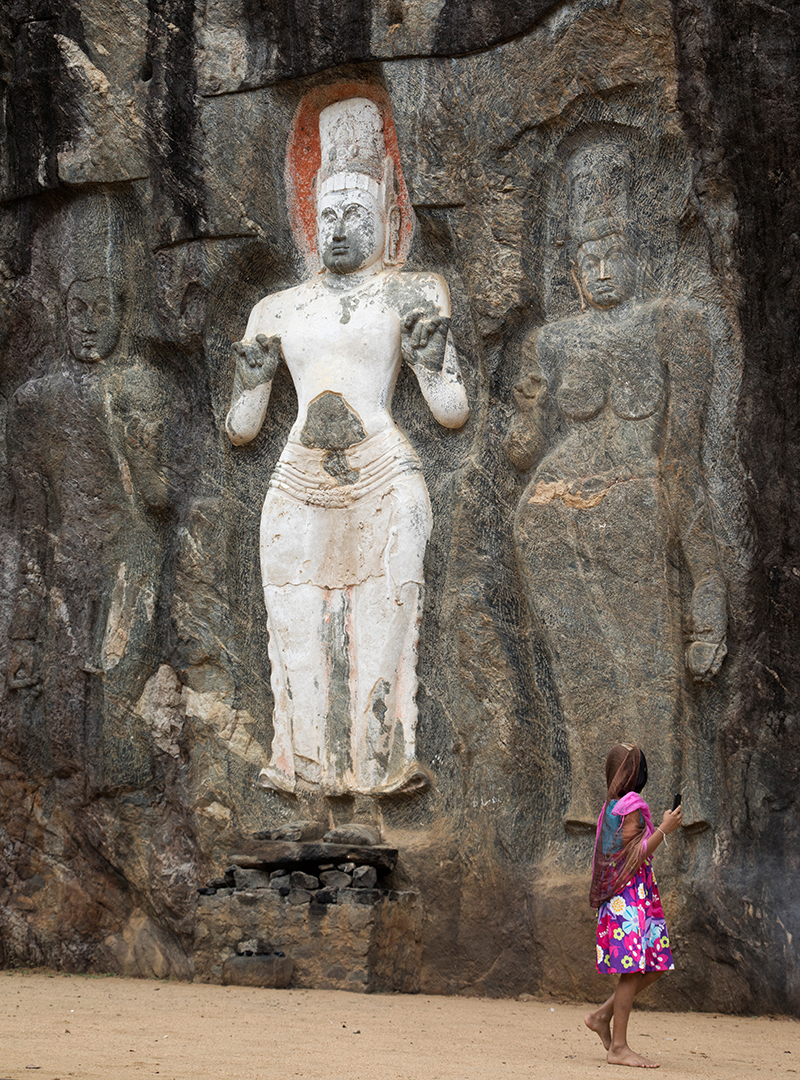 This is the first picture I took of my subject at Buduruwagala Ancient Temple. Composing the image with her and the tall carvings in the rock wall adds a sense of scale to the carvings. 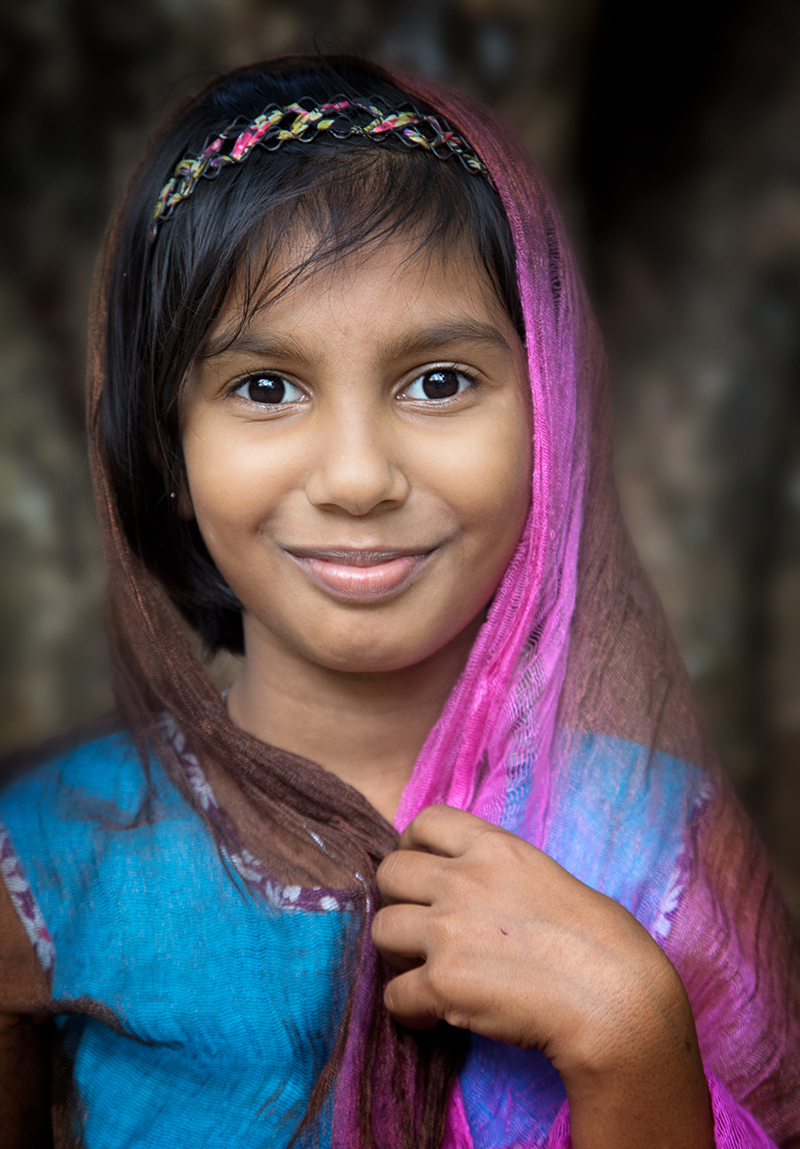 Here’s my favorite portrait of the girl. One photo tip: If the eyes are not in focus and well lit, you’ve missed the shot . . . in most cases. One photo philosophy: Remember that when you are photographing a person, you are basically a mirror, that is, your feelings are projected onto the subject, who reacts to those feelings. My guess is that you, the reader, can tell exactly how I was feeling when I took this portrait.

I took this photograph at the Pinnawala Elephant Orphanage with my Canon EF100-400mm f/4.5-5.6L IS II USM – which is my favorite wildlife photography camera/lens combo. The photograph, like my photograph of the stick fisherman, illustrates the important composition technique of separation – that is, the two elephants in the foreground are separated from the groups of elephants in the background.

I’d like to end my Sri Lanka Sojourn article with three photographs that I took inside (in very low light) of a Hindu temple near Pasikuda. The women were making offerings and praying for the health of their husbands. From a technical standpoint, the photographs illustrate the accurate color and wide dynamic range of the camera’s image sensor, as well as low noise at high ISO settings. From a photographic standpoint, the three photographs illustrate creative storytelling. And from a personal standpoint, my wife and I were delighted to be welcome with open arms into the temple from the moment we arrived.

When it comes to storytelling, we need to take wide-angle and close-up photographs. This wide-angle photograph, taken at ISO 10,000 with my Canon EF24-70mm f/2.8L II USM, captures the entire scene – the Hindu priest interacting with the wives against a beautiful background.

This photograph illustrates one of my most useful photo tips: Use your camera like a drone. To get this shot, which clearly shows the offerings by the women, I held my camera above the subjects, and used Live View to compose the scene. 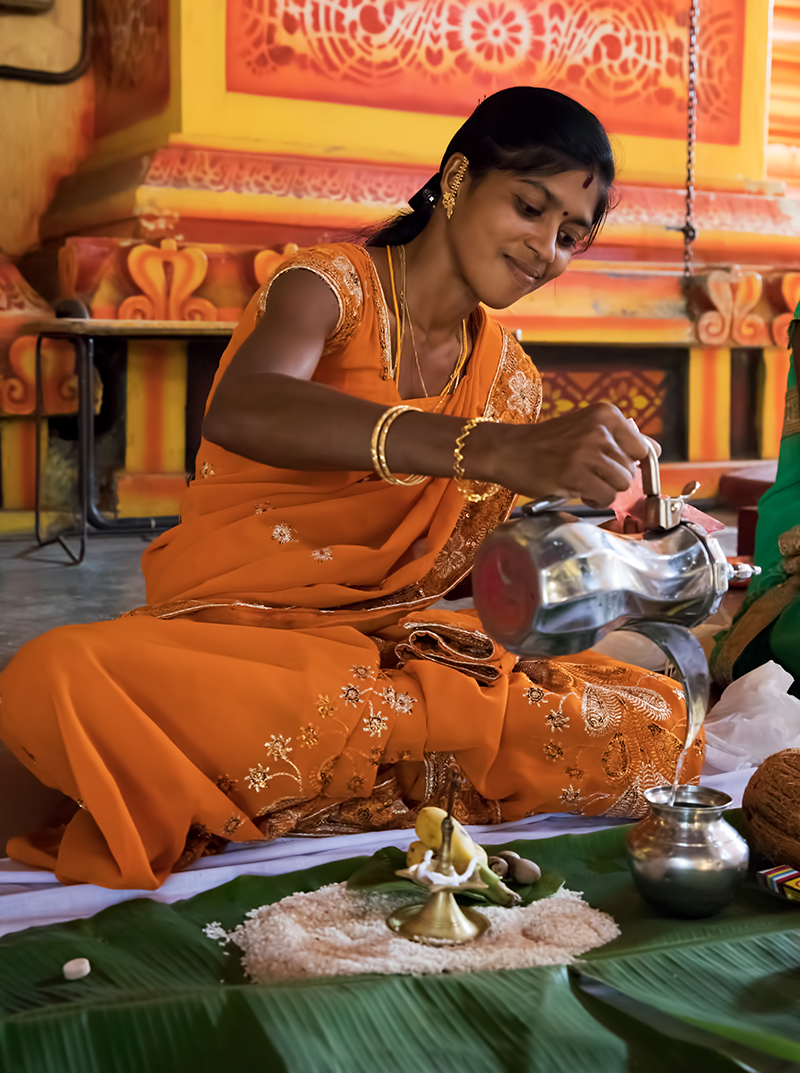 I photographed this woman pouring tea while I was literally lying on the ground. The idea was to see eye-to-eye and shoot eye-to-eye. As with my photograph of the girl shown earlier in this article, photographing at eye level gives the viewer of the photograph the feeling that the subject is looking directly at him or her.

I hope you have enjoyed my Sri Lanka Sojourn with the Canon 5D Mark IV. Maybe someday you will make the journey to Sri Lanka – and capture the wonders of this exotic land.

Rick Sammon has been a Canon Explorer of Light since 2003. He has written 36 books and has 13 classes on KelbyOne. For more on Rick, check out his web site: www.ricksammon.com.