To see the Speedlite 470EX-AI in action, check out our video gallery here!

With its world’s first automatic bounce flash capability, it’s easy to lose track of some of the basics designed into Canon’s newest EX-series Speedlite. In this article, we’ll quickly review these fundamentals, so photo enthusiasts have a better idea of where it fits. And, its bounce capabilities notwithstanding, Canon users can hopefully gain insight into which EX-series Speedlite will be their best investment.

Position in the Canon Speedlite Line

The Speedlite 470EX-AI is a totally new addition to Canon’s EX-series Speedlite line, and does not replace any existing flash in the lineup. That’s important to underscore: the current Speedlite 430EX III-RT, and top-of-the-line 600EX II-RT, remain fully in the line, and will continue to be of interest to serious Canon shooters — especially those who want to leverage their radio-based wireless flash features.

The 470EX-AI has power output, in terms of Guide Numbers, very similar to the 430EX-series flashes (more specifics later in this article), so some users will consider it a mid-range Canon Speedlite. 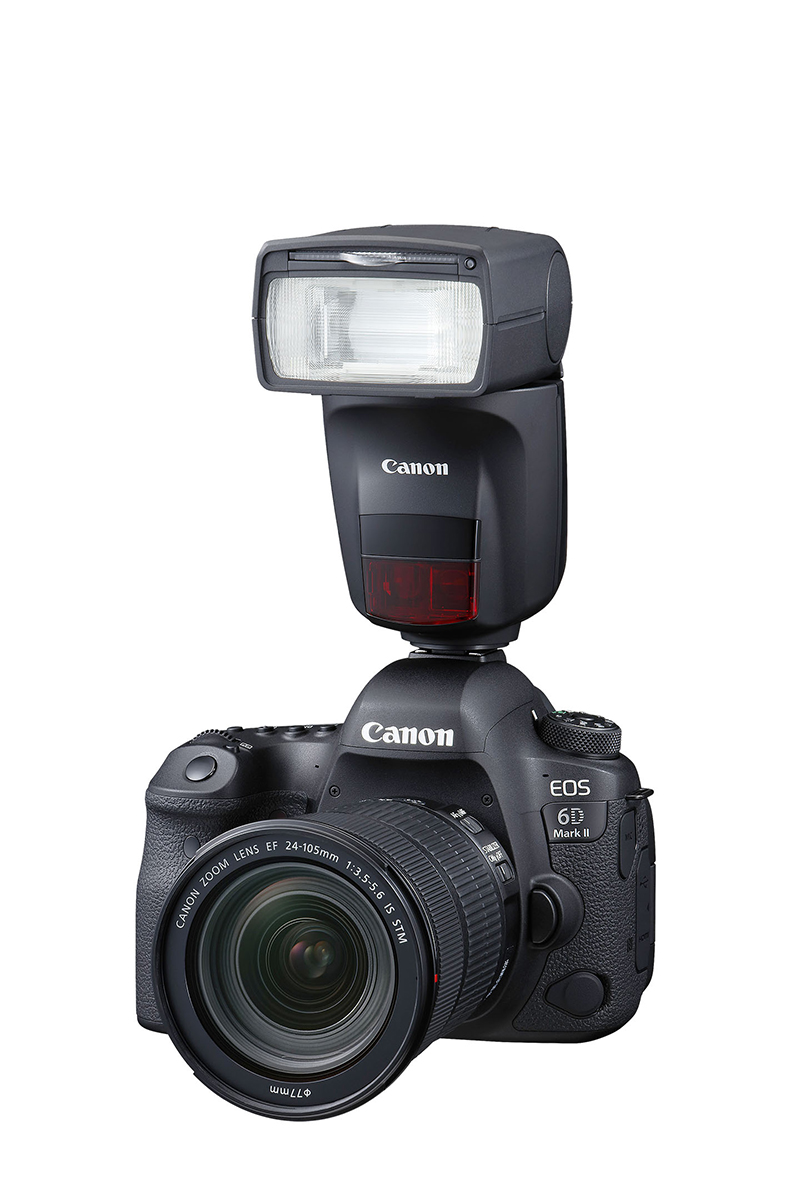 Speedlite 470EX-AI’s headline feature is its world’s first automatic bounce system. But as we will discuss in this article, it’s beautifully suited as a general-purpose flash for many EOS users. It does not replace any flash in the Canon EX series, but instead joins the system as an important and versatile new addition.

The Flash Head, and Flash Coverage

The Speedlite 470EX-AI provides auto flash head zooming, changing the angle of illumination to match the detected lens on the camera. The normal range of zooming covers a 24–105mm lens, on a full-frame camera — there is automatic zooming correction if you’re working with a compatible Canon EOS body with a smaller APS-C size sensor, to account for the approximate 1.6x “crop factor” on those cameras.

Manual zooming of the flash head’s angle of illumination is also possible, with a simple press of the top of the Cross keys control, and then a turn of its outer dial, on the back of the Speedlite. This can also be done via the camera’s External Flash Control menu, when this flash is mounted on compatible EOS cameras…more on the camera menu interface later in this article.

Control layout on the rear of the Speedlite 470EX-AI is similar in many ways to the existing 430EX III-RT, but with the addition of a new AI.B (Auto Intelligent Bounce) measurement start button. To zoom the flash head, just press the ZOOM section of the central Cross Keys (it’s like a touch-pad), and then turn the outer dial to select the manual position you want, on the flash’s dot-matrix LCD panel.

There’s also a built-in, ultra-wide pull-down panel, which can spread the light to cover lenses as wide as 14mm on a full-frame camera (9mm or longer, with APS-C sensor cameras). This is essentially identical to the pull-down, wide-angle panel on Canon Speedlites like the 430EX III-RT, and 600EX II-RT. It makes the flash entirely useable with ultra-wide zooms, like the EF 16–35mm lenses on full-frame cameras, or the EF-S 10-22mm zoom on cameras like the EOS 80D or 7D Mark II. 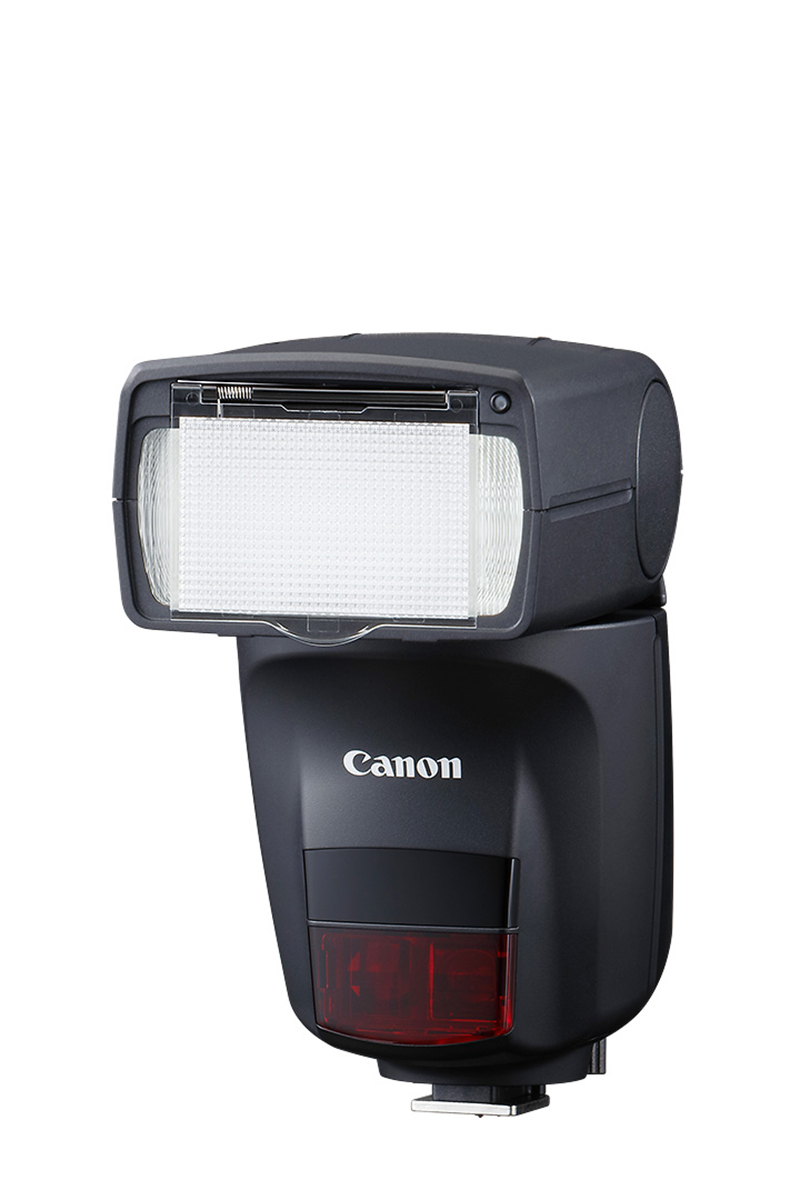 The 14mm wide panel, shown pulled-out and in place here, spreads the Speedlite 470EX-AI’s illumination to cover ultra-wide lenses, like the EF 16-35mm zooms, or with APS-C cameras, lenses such as the EF-S 10-22mm or 10-18mm zooms.

An opaque plastic Bounce Diffuser (the Canon Bounce Adapter SBA-E4), dedicated to the 470EX-AI, is also included. Sometimes generically referred to as a “dome diffuser,” this is intended to spread light to take advantage of nearby walls and ceilings, and provide a catch-light in the eyes of nearby subjects during bounce shooting. It is unique to the 470EX-AI, and will not directly attach to other Canon Speedlites.

If you do the arithmetic, this means that at the 35mm zoom position, at f/4 and ISO 400, you can shoot out to a maximum distance of 45 feet (13.7 meters) — a significant increase from what users could expect from the built-in flash.

Like any EX-series Speedlite, the 470EX-AI offers E-TTL automatic, through-the-lens flash exposure with any Canon EOS digital or 35mm film camera having E-TTL compatibility. This means every interchangeable lens EOS digital camera to date (with a hot shoe) can use the 470EX-AI for conventional flash shooting, with no compromises in auto flash exposure capability.

E-TTL II, a more advanced version of E-TTL flash metering, is performed if you mount the 470EX-AI onto any EOS digital SLRs introduced since the EOS 20D and EOS-1D Mark II (in other words, any camera launched since 2004).

Manual flash exposure is also possible, from full 1/1 down to 1/128 flash power. Manual power can be set in 1/3 step increments.

This is where the current Speedlite 430EX III-RT and 600EX II-RT will have an advantage over this new addition to the flash line.

For wireless flash, the 470EX-AI offers optical-type wireless E-TTL only — no radio compatibility. And, it can only be used off-camera as a wireless Receiver flash… it cannot be used on-camera as a Sender unit, to trigger any off-camera Receiver Speedlites.

As an optical-type Receiver flash, however, it can be combined with any previous or current Canon Speedlites having optical wireless E-TTL ability, with different Speedlite models mixed and matched as you desire. The Receiver sensor is on the front face of the flash, and this can be swiveled to face more directly at the on-camera Sender unit as needed, to maximize distance from the camera, and reliability in bright ambient light situations. As before, an unlimited number of Receiver flashes can be used off-camera with Canon’s optical-type wireless flash, as long as they’re within range of the optical signals from the Sender unit on the camera.

And, as a wireless Receiver unit, it can be assigned to a flash Group A, B, or C.

Above and beyond its world’s first Auto Intelligent Bounce capabilities, Speedlite 470EX-AI can be used on-camera for conventional, user-set bounce flash shooting as well. And, it can do this with any E-TTL compliant EOS camera body that has an accessory shoe.

Even though the flash head of this flash is completely motorized for upward tilt and side-to-side swivel, it can be manually moved at any time by simply grasping the head by hand and adjusting it. No release buttons need to be pressed first! In fact, what looks like a large, round release button at the side of the flash is actually a Bounce Angle Setting button, to memorize a user-set bounce position.

With the sliding Bounce Mode switch at its 0° position, the flash is set for straight-ahead, direct flash shooting, when it’s mounted on the camera’s accessory shoe. In fact, out of the box, if you do tilt or swivel the flash head for manually-set bounce flash shooting, when you tap the shutter button halfway, its motorized head will return to that straight-ahead, 0° position. 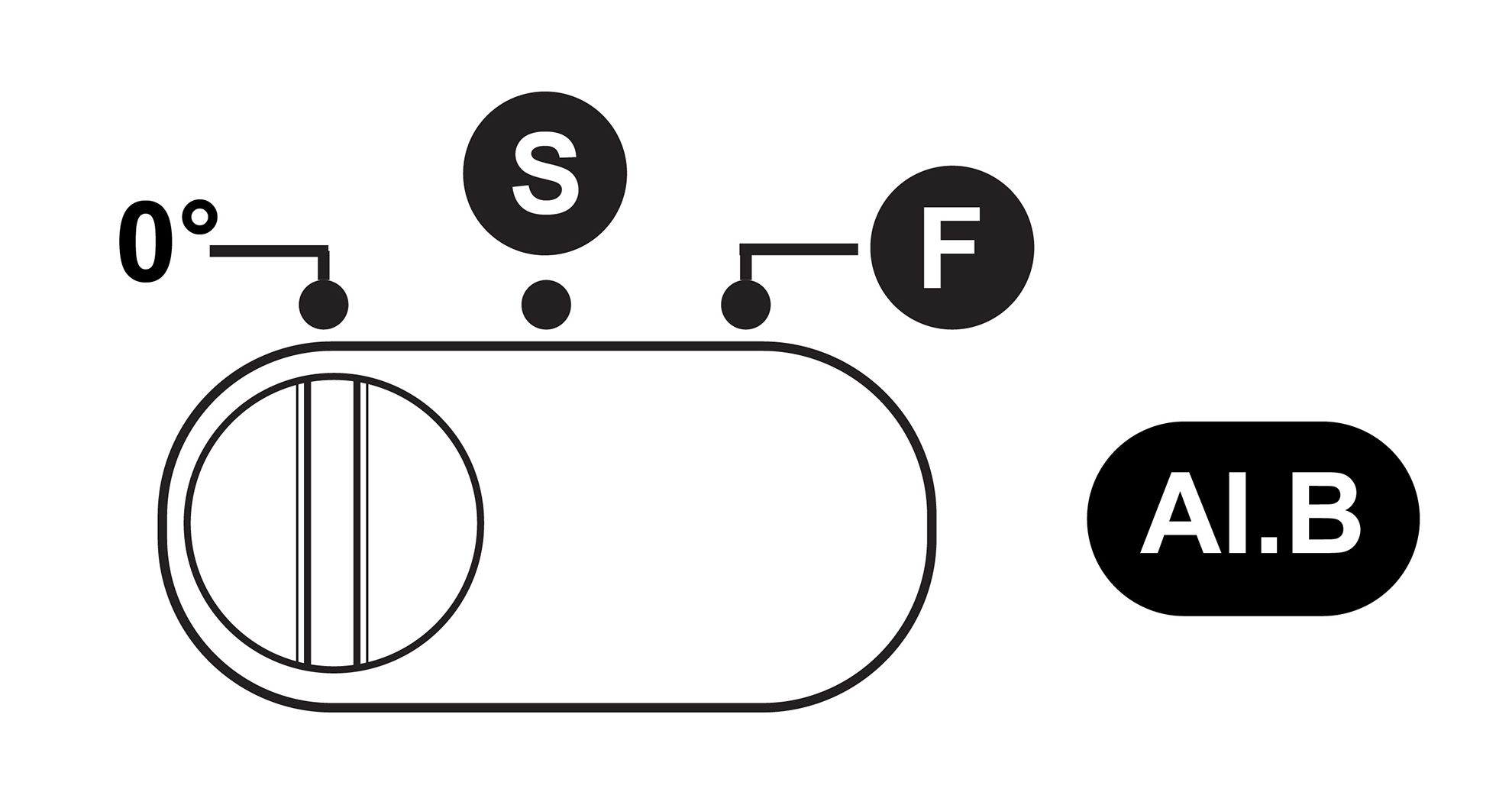 A three-position sliding switch on the rear of the 470EX-AI defines its capabilities for bounce flash shooting. At the 0° position, by default, the flash is intended strictly for straight-on, direct-flash use. If you want to perform ordinary, manually-set bounce flash, you first must set flash Personal Function 09 to its “1” setting, as described in this article. Otherwise, the motorized flash head will simply return to its straight-on position when you press the camera’s shutter button halfway down.

To perform conventional, user-defined bounce (bypassing all the flash’s auto bounce capabilities), you first need to change flash Personal Function 09 to its “1” setting — this is the Manual Bounce P.Fn, and it needs to come off its factory-default “0” setting. Once that’s done, you can now manually position the flash head for bouncing, and it will remain in that position as you shoot. (Be aware that with the Bounce Mode switch at the 0° setting, and P.Fn 09-1 active as just described, the 470EX-AI will not automatically re-position the flash head if you change from horizontal to vertical shooting…any and all bounce/swivel adjustments are manually done, in traditional fashion, by the photographer.)

Once you’ve changed P.Fn 09 on the flash to its “1” setting, you can leave it there more or less permanently…it won’t automatically revert to the factory-default “0” setting, although you’re free to change it back there at any time.

Speedlite 470EX-AI is powered by four AA-size batteries; there is no external connection for a high-voltage accessory battery pack. Alkaline AAs, or rechargeable Ni-MH AAs, can be used. (Canon specifically recommends not to use AA-size Lithium disposable batteries in any Canon devices accepting AAs, for technical reasons.)

Like the Speedlite 430EX III-RT, there is a flash recycle (“charge”) progress bar indication on the flash’s LCD panel, indicating the recycle level at a given moment after the flash fires. This disappears once full recycle has occurred…Canon recommends changing batteries if this charge indicator remains visible for 30 seconds after the flash has fired.

The flash has Auto Power Off, after about 90 seconds of non-activity, to conserve battery power. This can be disabled, via Flash Custom Function 01 (set to its “1” setting). 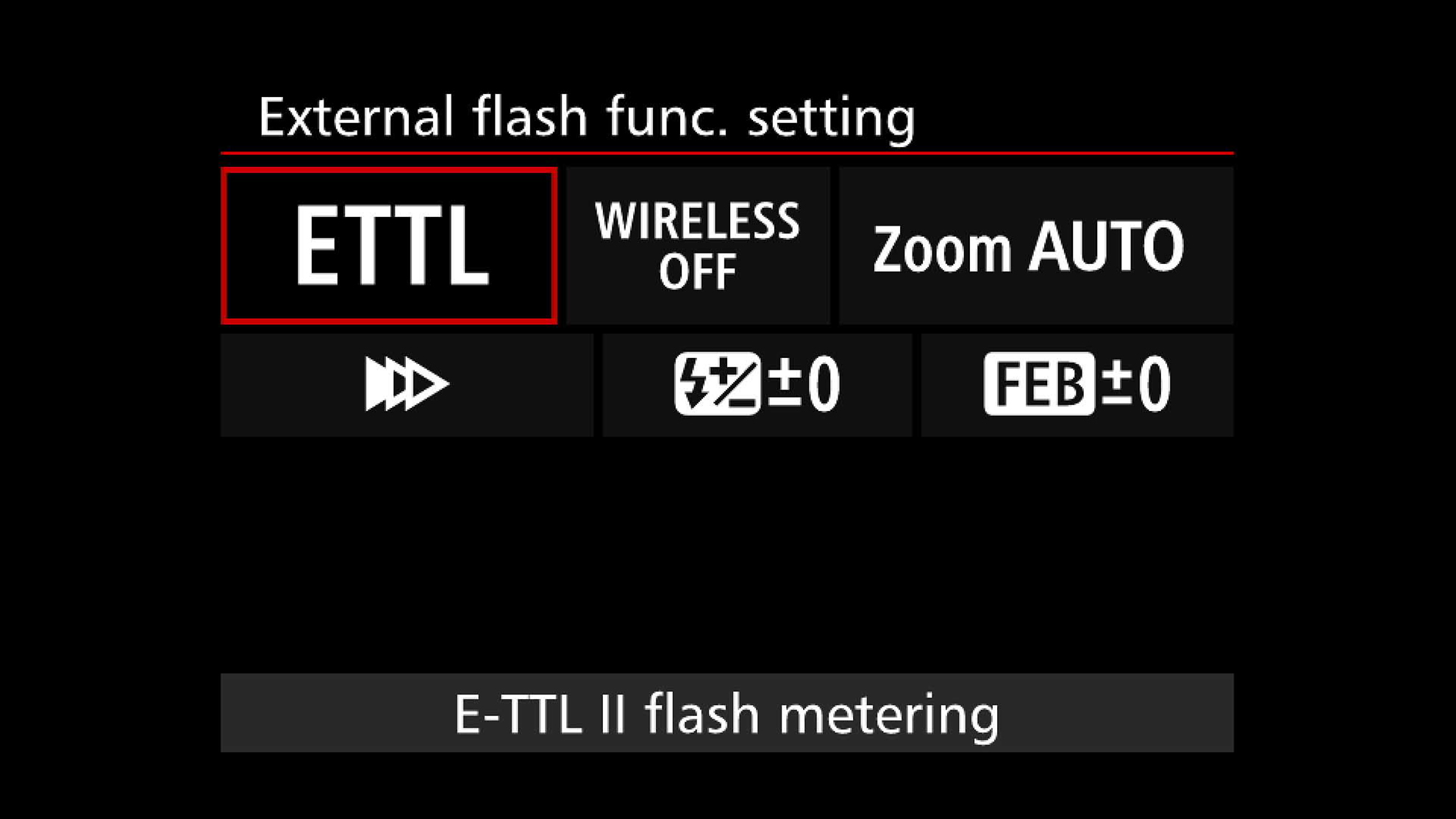 The External Flash Control menu screen is a huge help when you want to quickly change settings on a flash attached to the camera’s hot shoe. Pictured here is the opening menu screen for the EOS 7D Mark II, when a compatible Speedlite is attached and turned on. It’s possible to see and set Speedlite Custom Functions as well, using the camera’s larger menu screens, as an alternative to the LCD panel on the 470EX-AI.

Speedlite 470EX-AI supports this, when used with any compliant EOS camera body. This allows using the camera menu, instead of the flash’s LCD panel and buttons/dials, to change settings ranging from the flash head’s zoom setting to wireless flash status.

Be aware that the Auto Intelligent Bounce features on the 470EX-AI, such as memorizing a bounce angle, do require pressing buttons on the Speedlite itself. And, while flash Custom Functions can be set on the camera’s External Flash Control menu, the flash Personal Functions must be set on the flash unit’s LCD panel, using controls on the rear of the Speedlite to make selections.

Speedlite 470EX-AI in many ways is designed and operates similarly to current and recent Canon EX-series Speedlites. While its Auto Intelligent Bounce capabilities (discussed fully in this article) are totally new and ground-breaking, in most other ways, anyone familiar with Canon flash operation will probably find day-to-day use with the 470EX-AI to be quite similar to what they’re used to.

In fact, this is one of the strengths of this new Speedlite: it can seamlessly join an experienced photographer’s system, and be easily and quickly incorporated into his or her working procedures. And, for those getting started in the EOS system, many of its features match the intuitive design of previous Canon Speedlites, making it relatively quick to use for many different types of flash operations.