My first class on lighting terrified me. I waited outside the classroom with the other students, excited to take what would surely be my first step on the road to greatness, and contemplated my future status as a photographic legend. Then we went into the room. There was our instructor (an actual photographic legend), standing among what must have been a thousand lights. In reality, it was 12; but it might as well have been a thousand. As the lesson progressed, what really terrified me wasn’t that I would have to learn how to use all those lights, it was that I didn’t see the light. Not only did the concepts fly over my head, but I couldn’t see the difference in the light when he changed something. As the week-long course progressed and he broke down his lighting process one light at a time, I not only started to grasp some of the basics of lighting, but came to understand a method that would serve me well for the rest of my career. 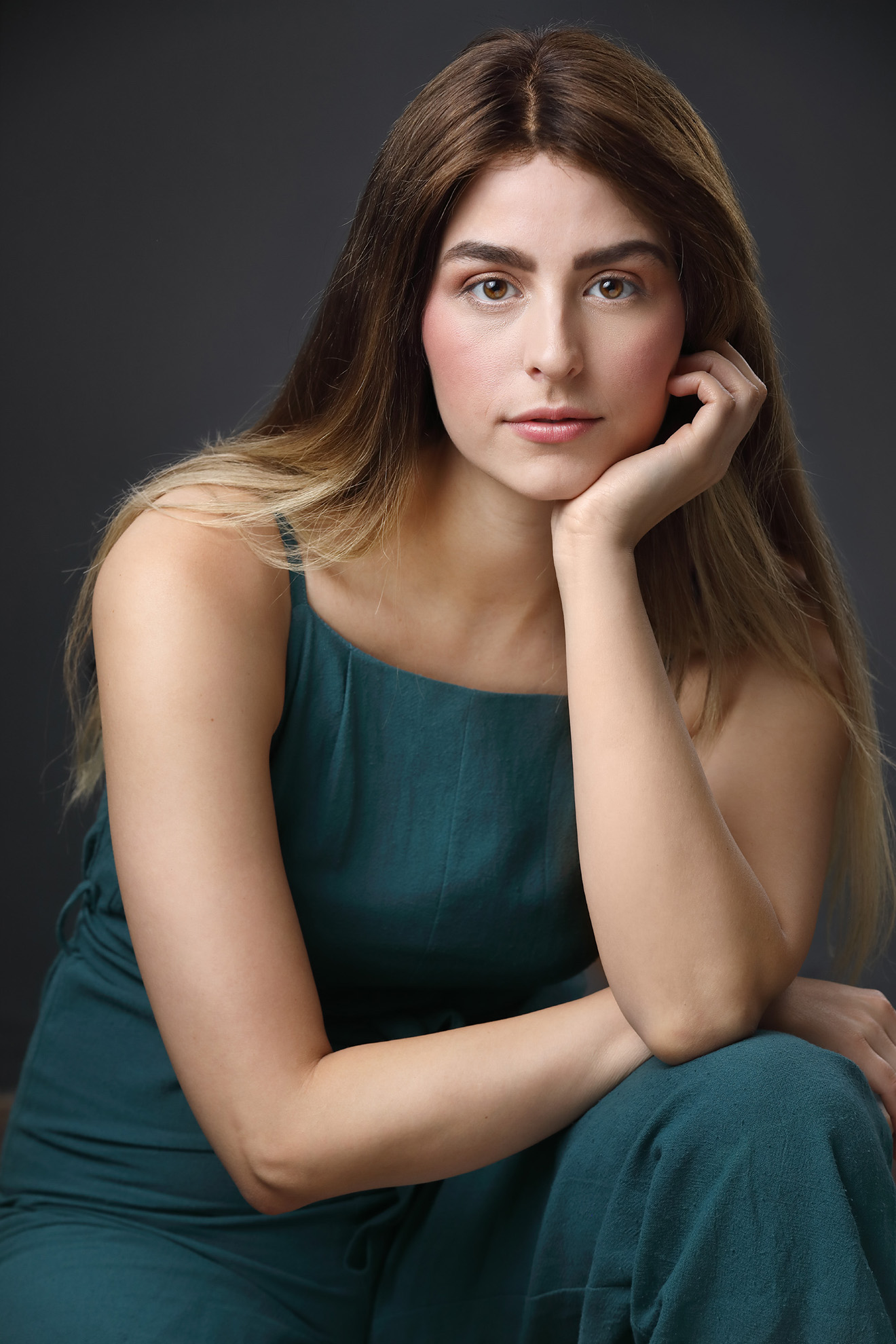 I learned years later that what I had seen is called the Demonstration-Performance method. Most commonly associated with flight instructors, it’s a technique that many seasoned teachers use when relating a new concept that requires both mental and physical skills. It goes like this: show a student how to do a difficult thing by explaining what you are about to do, then demonstrate it. After their mind is blown, start breaking down the process and guide the student through recreating the method one step at a time. Follow that by evaluating the performance, and repeat the process. Because of that method, I never forgot the basics of studio lighting. Since then, whenever I feel stuck in a session, I go back to the beginning and re-build my setup one light at a time.

Using my go-to light source, the Canon 600EX-RT Speedlite, I am going to describe my process of building a great portrait lighting setup starting with one light and finishing up with three. Keep in mind there are many techniques and many different ways of approaching a portrait. This is just one of mine. My hope is that you take home not only this very useful lighting technique, but also the method I use in creating it. 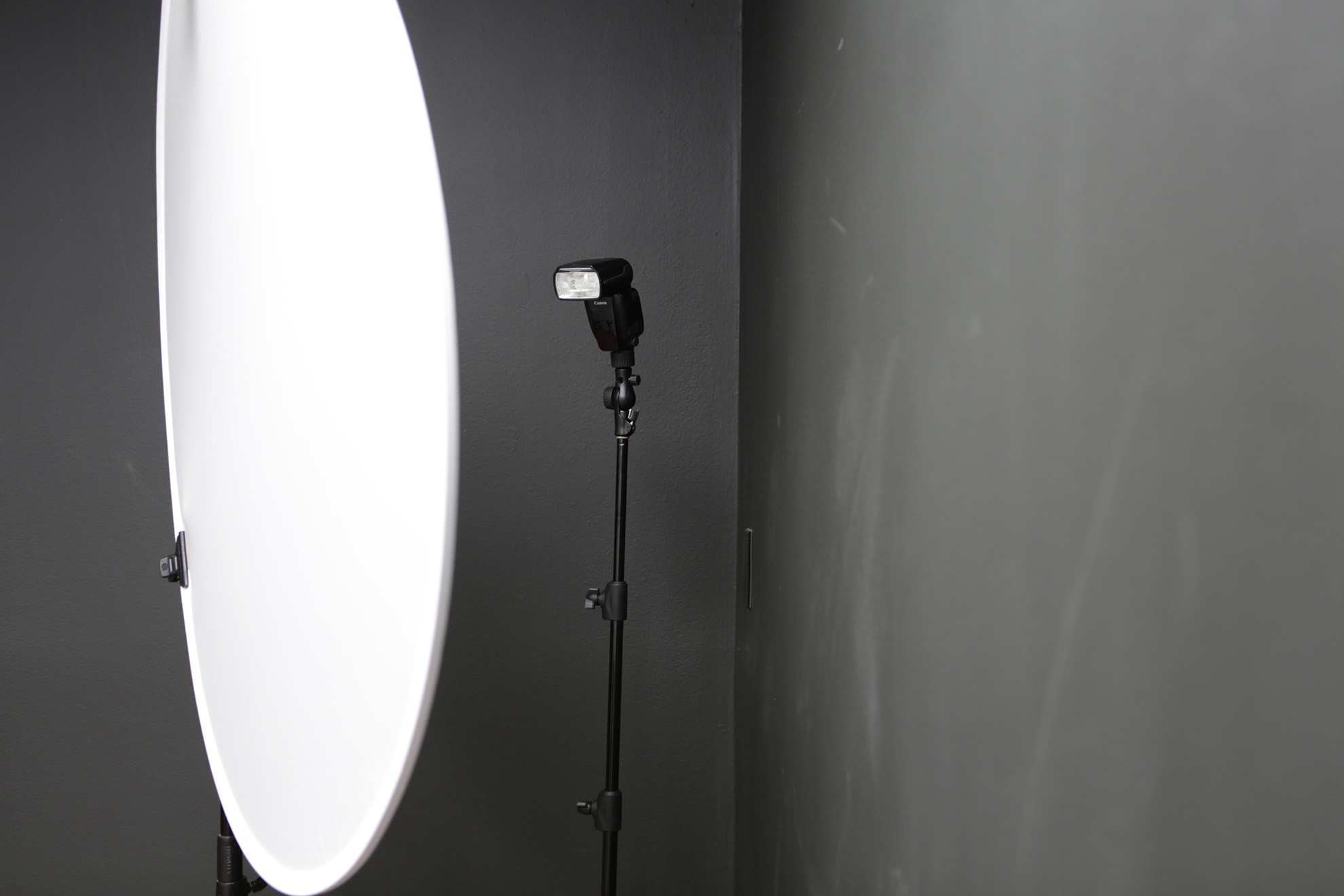 Intent is the difference between good photography and art. Intent informs every decision you make in a session and provides you with a clarity of vision that goes beyond just getting a good exposure. Intent is the “why,” your skills are the “how.” Before you start moving lights around and testing exposure, stop and ask yourself what the intent of the image is. Follow that up by asking yourself how you can use your skills and tools to serve that intent. For the purposes of this lesson, let’s say that our subject is a model in need of a portrait to submit to modeling agencies. This tells me that it needs to be relatively simple and clean, showing off the natural beauty of my subject without a crazy wardrobe or a distracting background. I also know that modeling images tend to be more dramatic, which will affect my lighting and posing. 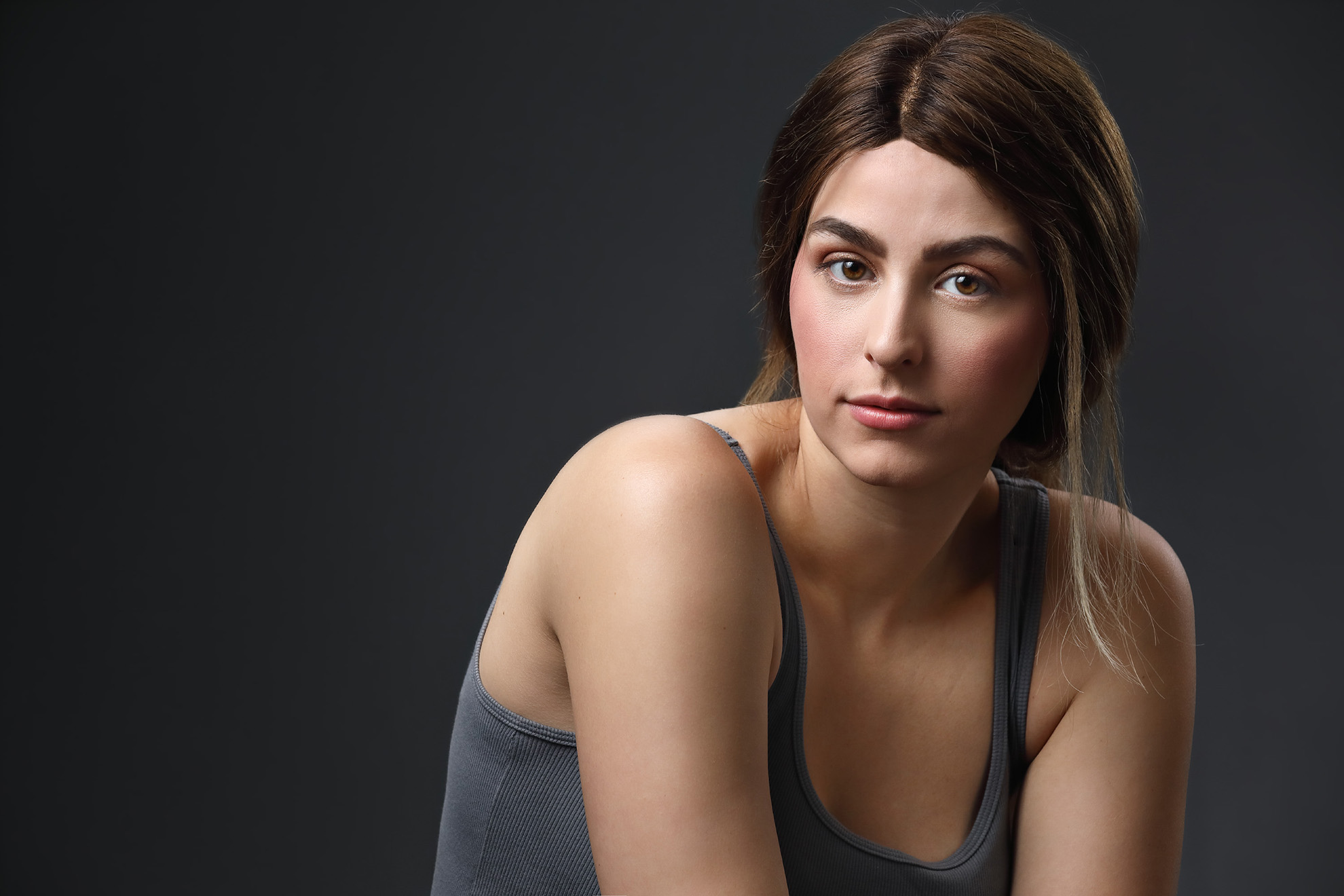 Based on the intent of the image, a modeling portrait for an agency submission, I am going to choose a simple, dark grey background in my studio. This will provide the simplicity and also the versatility later on when we start adding in multiple light sources.

When using a Speedlite as my main light source, I usually default to a photographic umbrella as my light modifier. Umbrellas are versatile, portable and inexpensive compared to other light modifiers. Also, they work with almost any strobe out there because umbrella mounts are pretty much universal. To create the dramatic lighting I want for this shot, I will select a 60” parabolic umbrella with a diffuser cover. This will give me a relatively large, soft light source that when used close to the subject, will not only be flattering, but also create deep shadows — perfect for a modeling portrait. 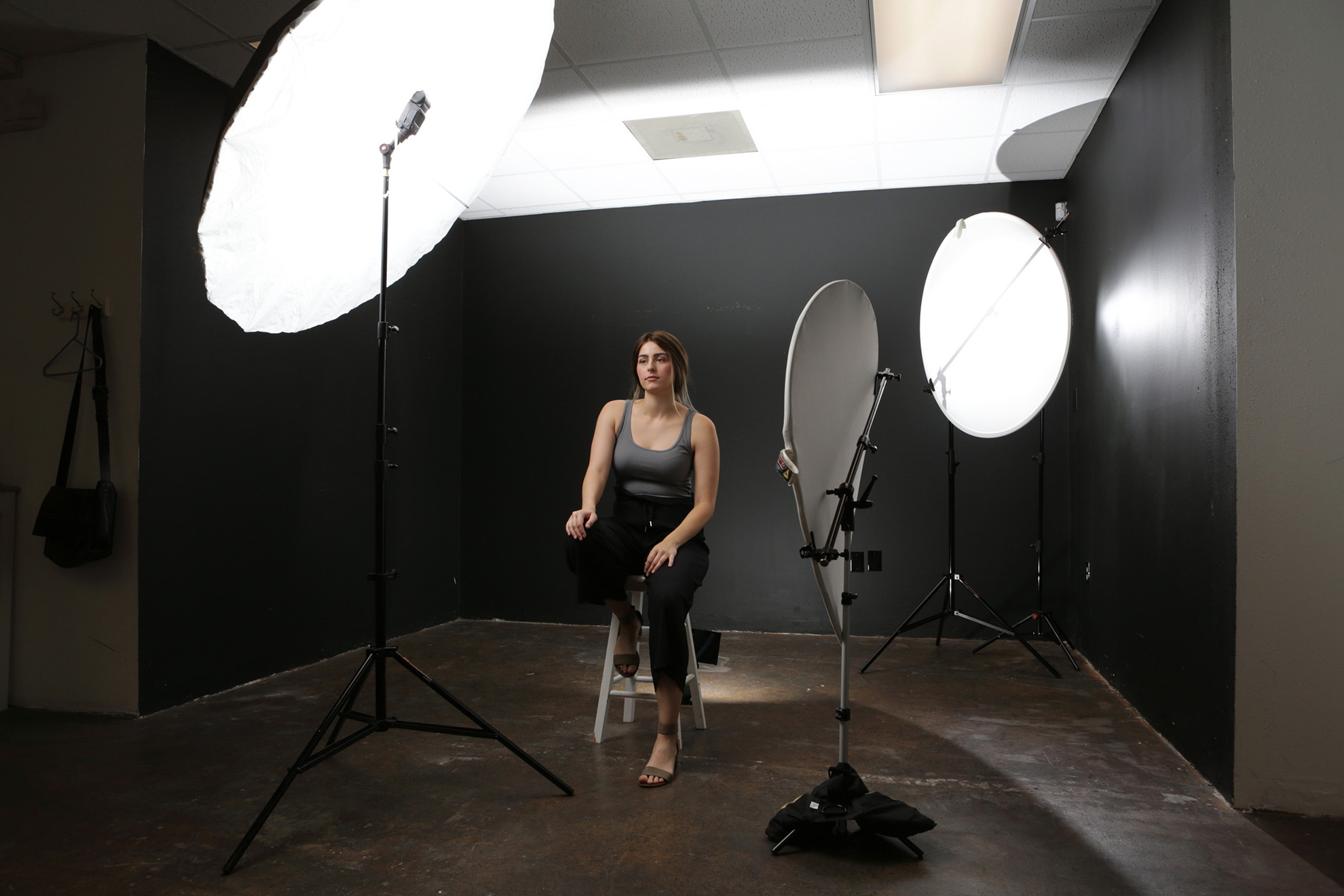 When it comes to the position of the light, conventional wisdom says to place it 45 degrees off center and 45 degrees up from eye level. It’s always a good place to start, but you have many options. When the options become overwhelming, I fall back on the intent. In this case, my client is looking for a standard modeling portrait for agency submissions, so I will place the light on camera left close to 45 degrees at just about one arm length from the subject’s face. The close proximity will provide diffused light while creating deep shadows. One of my favorite techniques in these situations is to feather (or turn) the light away from the subject and toward the camera a few degrees rather than pointing it right at them. It spreads the softest light from the edge of the umbrella a bit more evenly on the subject. When using a light in so close to the subject like this, it’s important to remember that when you aim the light directly at them you run the risk of creating a large disparity in the brightness of opposite sides of the face. You might find that the exposure on the side of the face the light is on is one, or even two stops brighter than the light on the opposite side. Feathering the light source away helps take care of that. 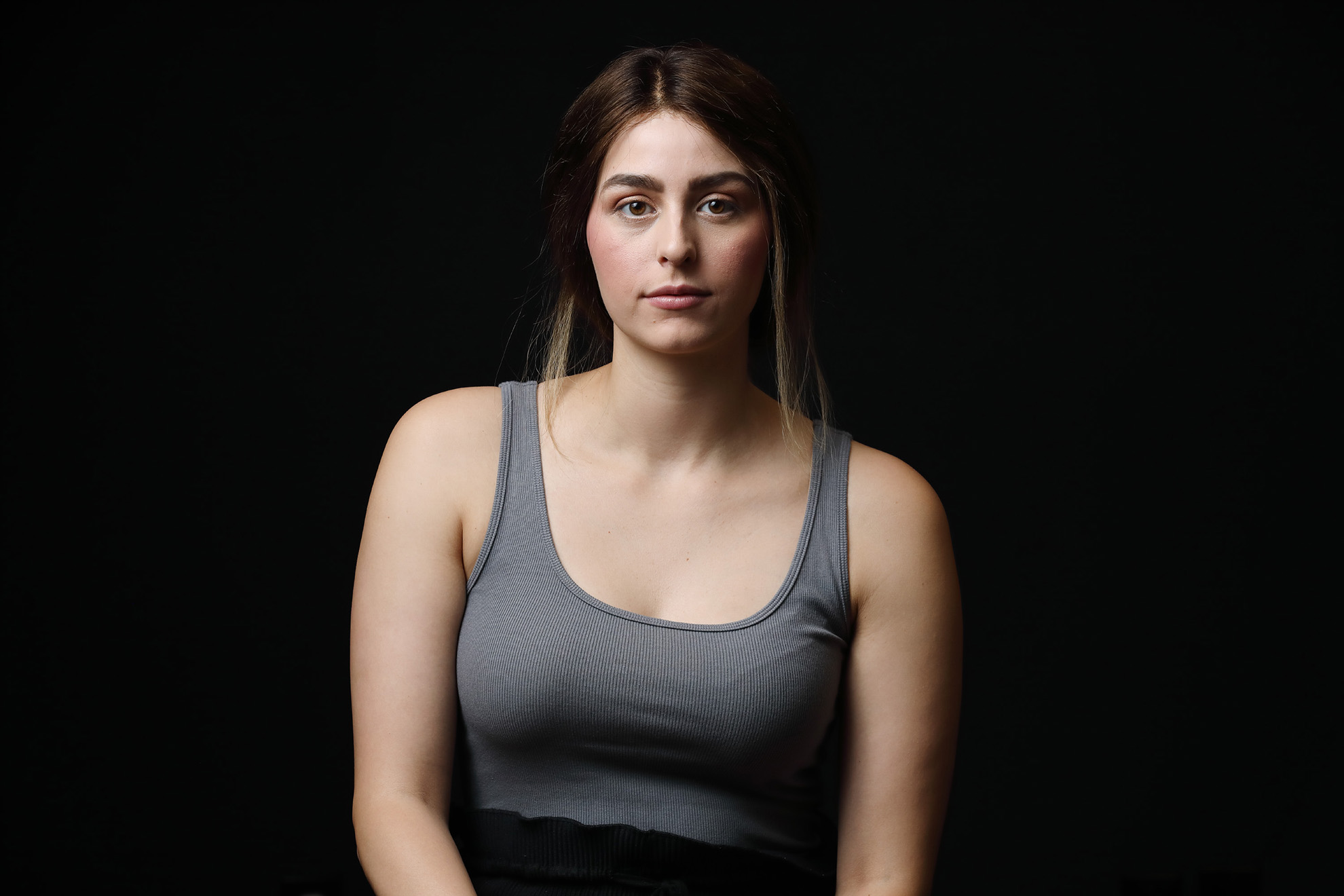 For an image of this type, I typically want to use a second light as an accent or edge light. There is a two-fold purpose to edge light. First, it adds dimension to an image. Photography is two-dimensional and the impact of an image can very often come from making a photograph appear more three dimensional. Edge lighting is one of the simplest ways to achieve that “pop-off-the-page” look. The second purpose is to separate the subject from the background. In an image with a dark background, this type of separation becomes necessary to keep the edge of the subject and the background from blending together. I tend to favor a more subtle edge light, something that you can see that doesn’t overpower the subject. Notice the highlights on the hair, jawline and shoulders once the second light is added. To help soften and spread the light coming from the Speedlite, I will often use a translucent reflector to shoot the light through. As a general rule, if I am only going to use an edge light on one side of the subject, I place it on the opposite side of the composition from the main light. 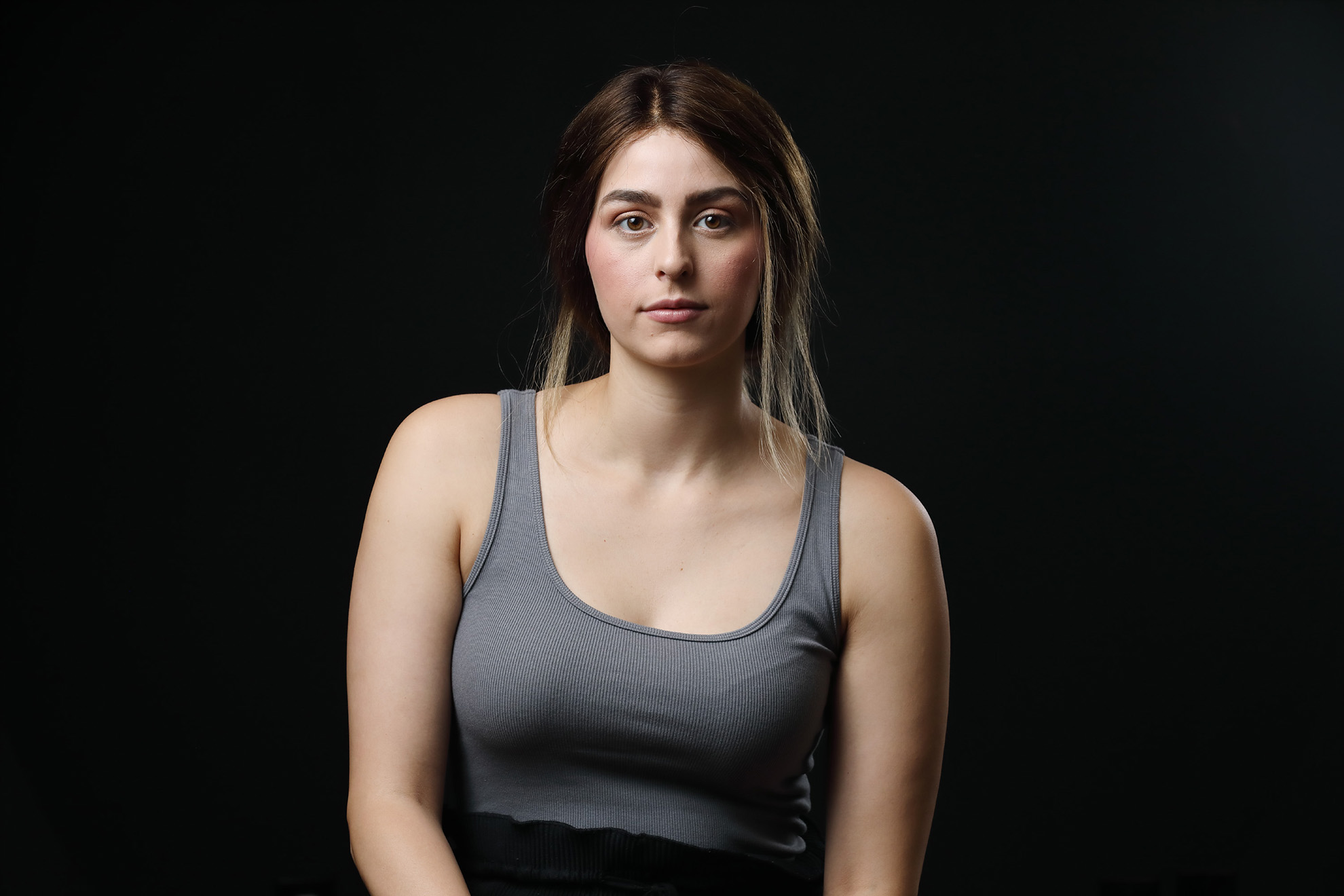 Creating a low-key image will often mean struggling with separation of the subject from the background. Adding a light to that background adds depth and, if done the right way, can also create a natural vignette that frames the subject. In the examples shown, I placed a Speedlite on the floor behind the subject using the small Speedlite stand that comes with the unit to stand it up. To avoid a hot-spot on the background, I pointed the flash at the ceiling and used a white bounce card to diffuse the light and push it toward the wall. The result is the wall changes from black to a dark grey and it is evenly illuminated behind the subject, giving the right amount of separation. Notice that the dark areas of her hair are now easily distinguished from the wall behind her.

When working in close or on location, reflectors are my preferred method of fill light. I recommend that if you are new to reflectors, start by using a white material rather than silver. Some of the brighter silver reflectors can bounce so much light that it can make getting the lighting ratio you want more difficult and result in an over-lit image. Employing a white reflector here allowed me to reduce the depth of the shadows and keep the shadow areas from blocking up and losing detail. You can always darken parts of an image later in editing, but bringing back underexposed areas too much in post production can hurt the quality of the digital file. Moving the reflector closer or farther away from the subject is an easy way to control the shadows and get the exact level of contrast you want. 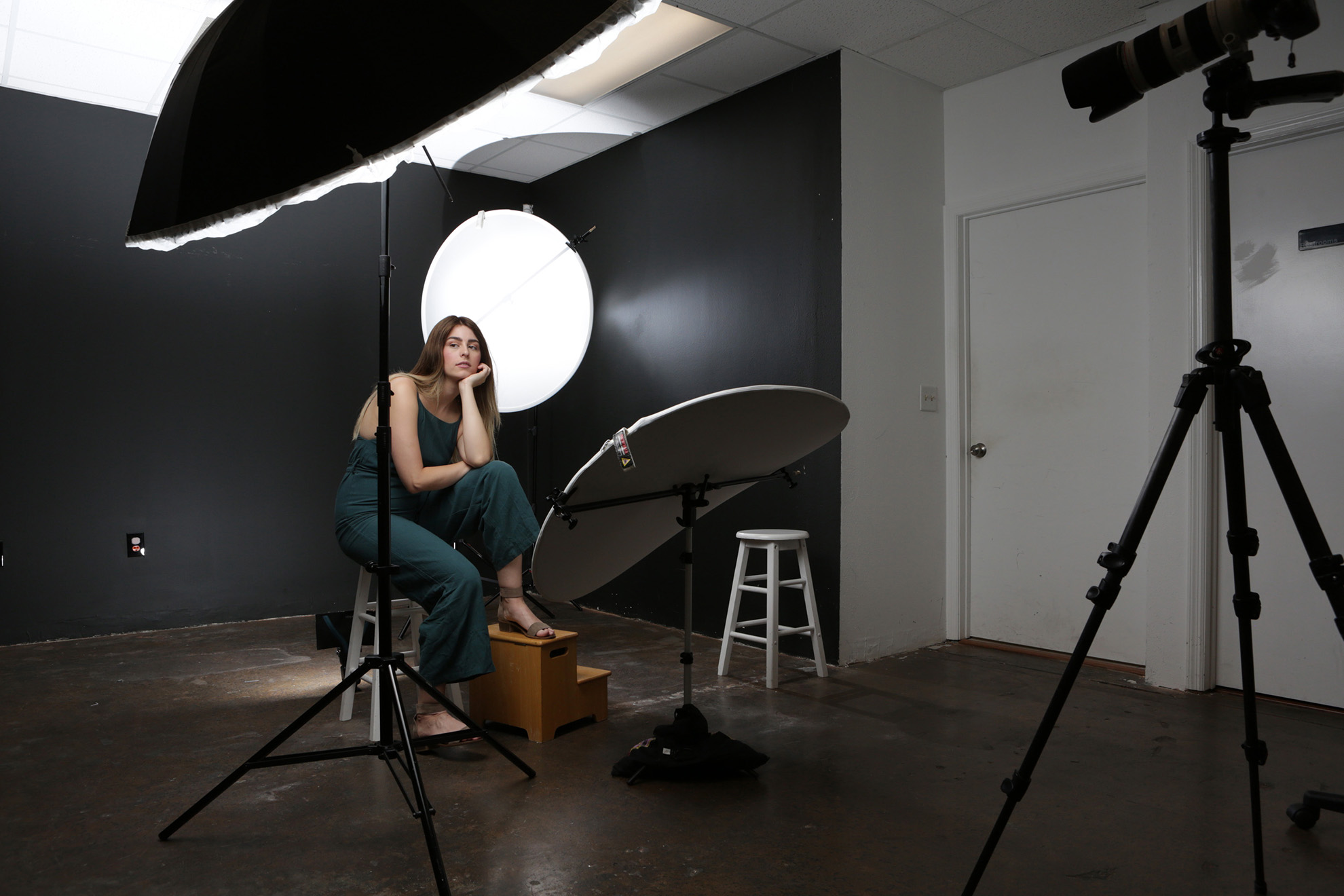 Building your lighting setups one element at a time is a great habit to get into when you want consistent results. Even with more than a decade of studio experience, I still find myself going through those motions in my head, breaking every session down to its parts just like my instructor did all those years ago.