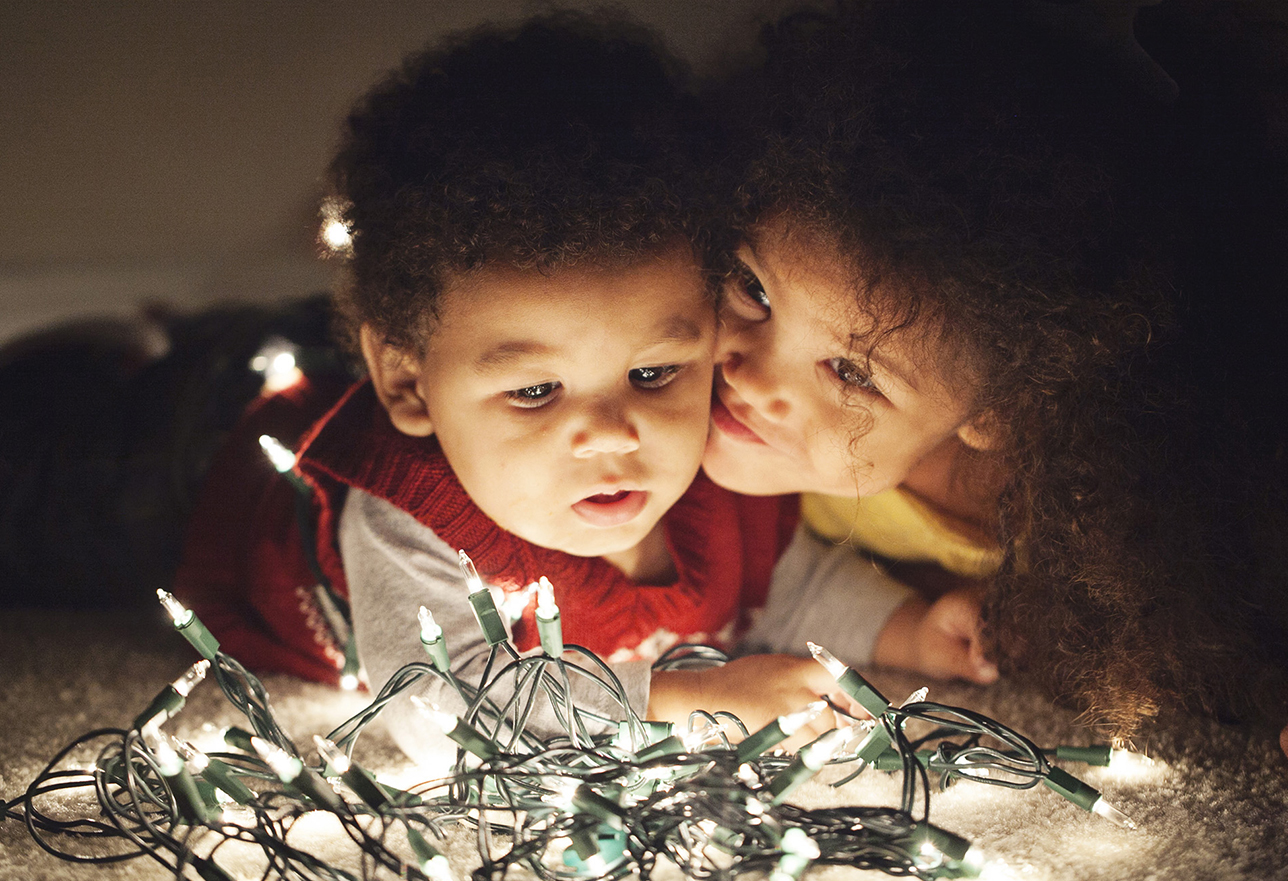 This article was originally published on March 28, 2011 and has been updated to include current product information.

December is a great month to photograph bright, festive decorations. One of the most eye-catching decorations is also the most challenging: holiday lights. There are many different tricks and techniques detailed below to capture the beguiling colors, glitters, and twinkles – pick the one(s) that work best for you and your equipment, and make the most of this beautiful holiday season! 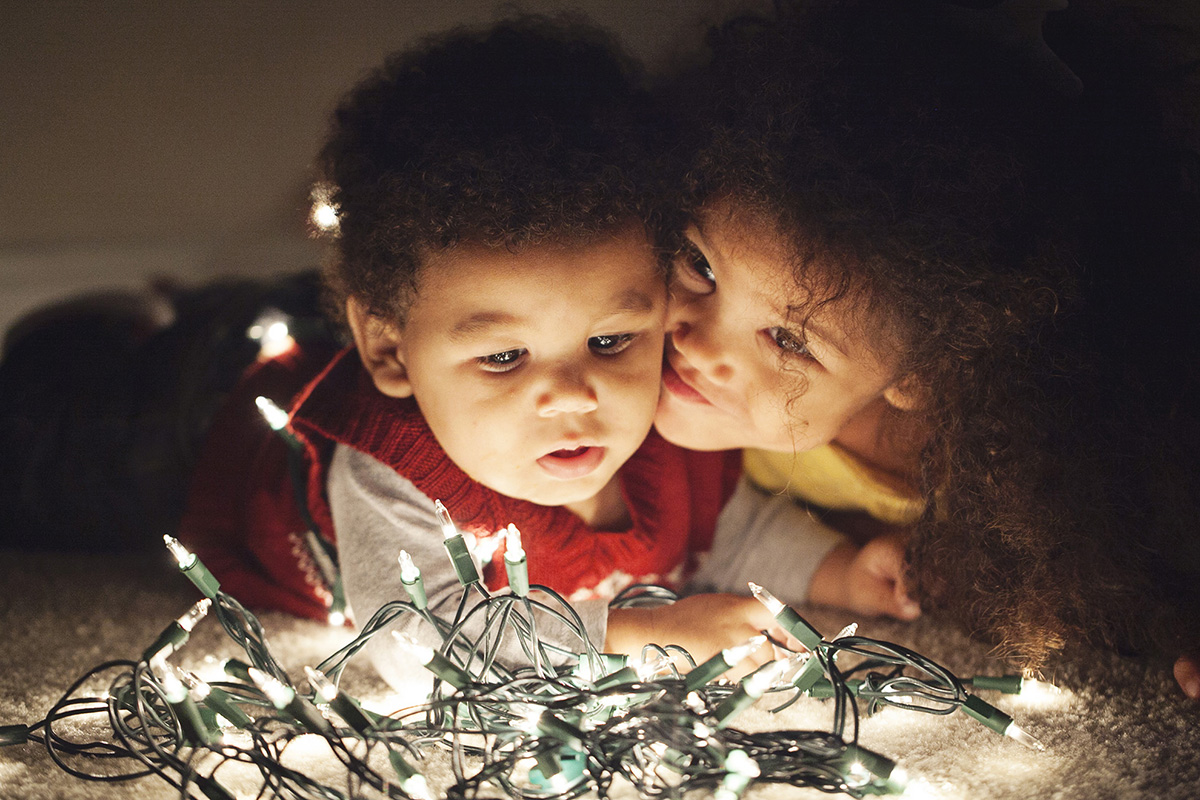 Really, almost any digital camera can be used for photographing holiday lights. The primary things you'll want are a camera with the ability to change shooting/exposure modes, and to make settings like raising or lowering ISOs. The ability to alter White Balance (the overall color "tint" of your pictures) can be very handy when you're photographing not only subjects lit by artificial lights, but the lights themselves.

Some recently-introduced cameras now have Electronic Viewfinders (sometimes abbreviated "EVF"), and these have some nice advantages when it comes to photos or video recording in dimly-lit situations. First, they can often raise the overall brightness of the scene you're looking at, making it easier to see and compose your images, even when most of the scene is in deep shadow. And secondly, you can see a good approximation of the brightness and the color rendition you'll likely get in your pictures, right in the EVF, before you take the first picture. And if you decide to change a setting like White Balance, you'll see the shift in color immediately after you've set it. So while photographers have taken great pictures of holiday lights for decades using traditional "optical" viewfinders, you'll likely find your success rate goes up a bit if you use a modern mirrorless camera, or a compact digital camera which has an electronic viewfinder.

While the intent of this article is not to act as a sales pitch, the recently-introduced Canon EOS R camera is outstanding in both viewing and focusing in low-light situations, arguably among the best cameras in the industry for this type of work. If you enjoy this type of low-light work, the next time you're camera shopping, you should take a look at this full-frame, mirrorless Canon EOS camera.

Most of the time, when photographing subjects such as lights or candles, you are in a low-light setting. However, this is one time when a flash is generally not a good option; so the first tip is to turn off your built-in flash. Your choice of Exposure Mode, on the Mode Dial, plays a major part in this. Any of the following shooting modes will prevent the built-in flash from automatically trying to pop-up and fire every time you press the shutter button half-way down in a low-light situation:

Flash Off mode (available on most recent EOS cameras)

Hand-held Night Scene mode, available in many recent Canon EOS models, as a separate icon on Mode Dial, or within the SCN (Special Scene Modes) settings.

There are three basic exposure tools to capture a great image: ISO, Shutter Speed, and Aperture – various combinations of these settings will optimize your camera to best capture this tricky low-light/bright-subject shot: 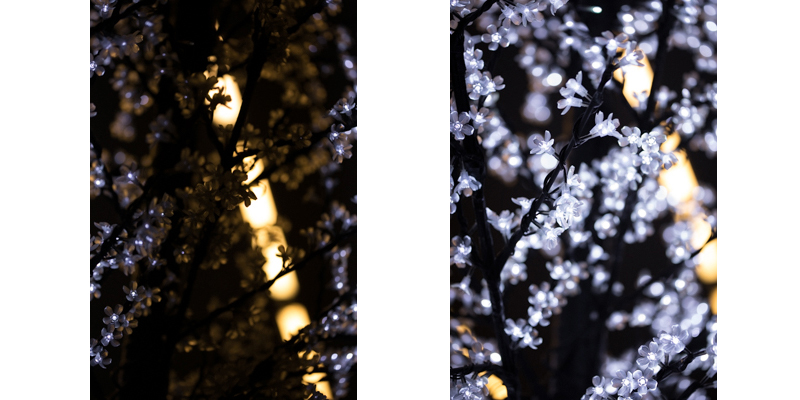 Slow shutter speeds, such as 1/30th or 1/15th of a second, are something we usually try to avoid in low-light shooting, to prevent blurs from camera shake. But there is one instance where you may need to use slower shutter speeds with holiday lights: certain types of new, energy-efficient type lights may cycle on and off rapidly, and you may take a picture and it appears that some or even all the lights are off! It's nothing you did – it's just the lights "blinking" on and off, at somewhere around 60 times per second, and at a fast shutter speed, you caught some or all during an "off" part of their blinking cycle. The answer: use a slower shutter speed. The easiest way to do this is go to the P or Av mode, and set a lower ISO (drop it down to half or one-quarter of where you started from), and try again. Setting a smaller lens aperture (higher f-number) in Av mode accomplishes the same slower shutter speed, too.

Setting your camera's White Balance is a great way to control the look and feel of your image. There are several options to choose from, even on basic point-and-shoots. Essentially, White Balance settings will tell the camera which light source it should capture as white, or neutral light - and every other light source within that shot will be adjusted accordingly. 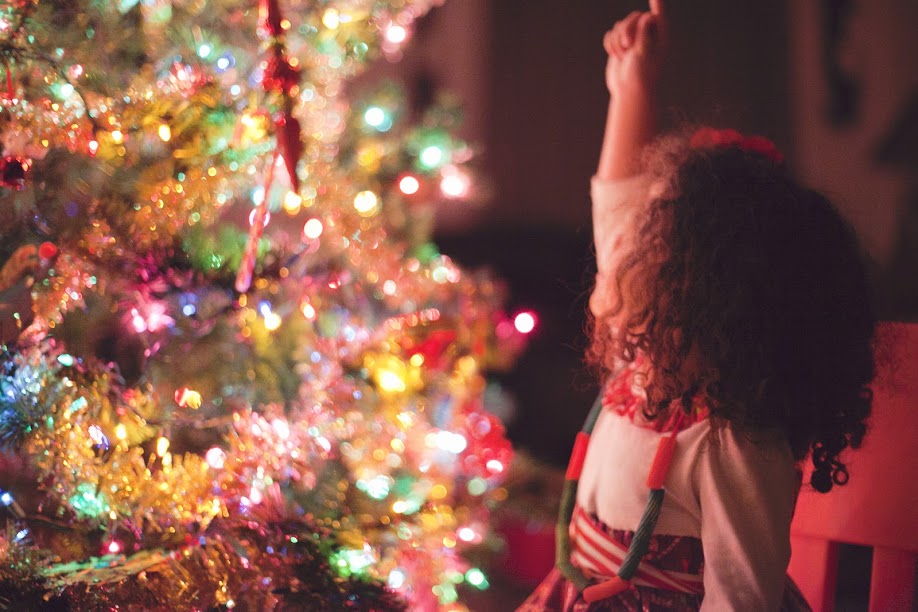 Auto White Balance (AWB) is the starting point for most users, and in the fully-automatic shooting modes is usually the only choice available. It will try to balance the color of white light in the scene, but will often deliberately leave a trace of warm tones (yellow or amber colors) to preserve a sense of "atmosphere" with traditional tungsten-type holiday lights. AWB is often the best place to begin for newer types of holiday lights, like energy-efficient LED and compact-fluorescent lights we're beginning to see more and more of.

If the overall colors aren't coming out as you want, consider one of the other White Balance options your camera provides. With most cameras, you'll need to be in a "Creative Zone" shooting mode, like P, Tv, or Av to set these. Common options include: Daylight, Shade, Cloudy, Tunsgten/Indoor, Fluorescent, Flash, etc. Here are some suggested settings that may work especially well for indoor or outdoor holiday light displays: 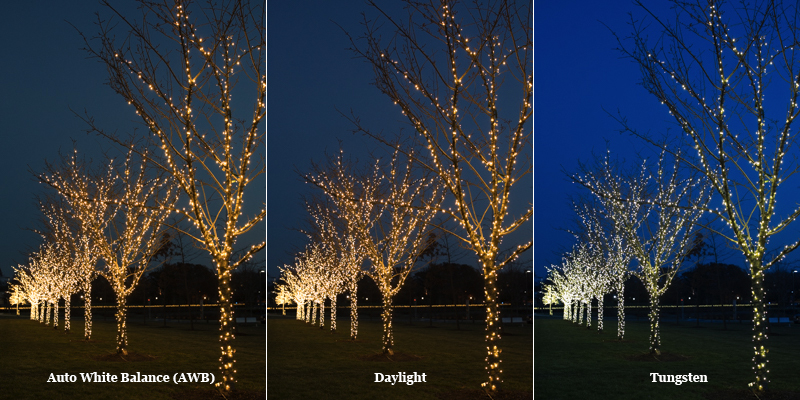 Whatever special effect you prefer, you can probably create or enhance it in the computer, with any number of third-party image editing programs or filter plug-ins. Poke around online, and you're sure to find a ton of options.

There are many ways to use today's digital cameras for stunning images of holiday decorations. Remember that every time you take pictures is an opportunity to learn more about your equipment, to experiment, and to have fun – think of it as a small gift to yourself this holiday season!

Make the Transition to Black and White Digital Photography