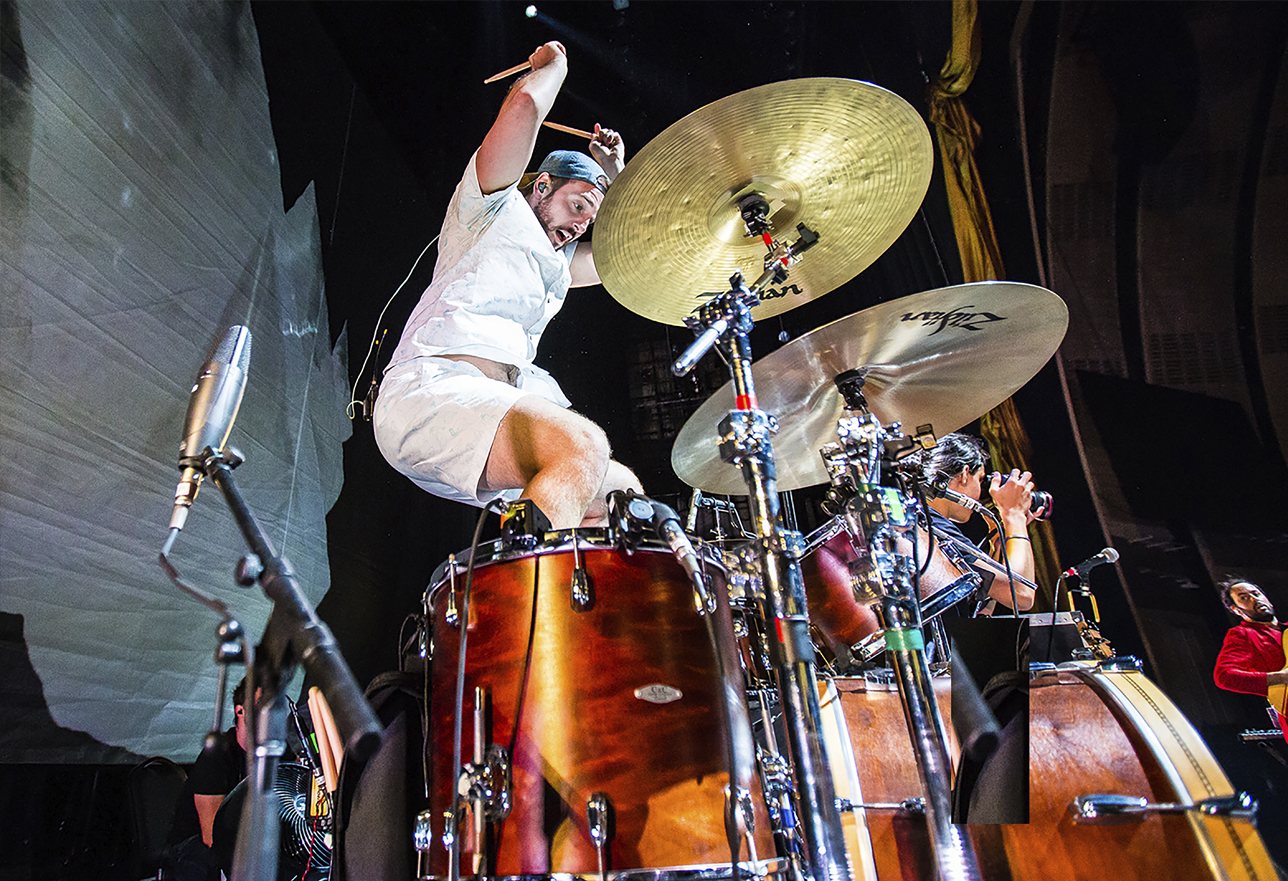 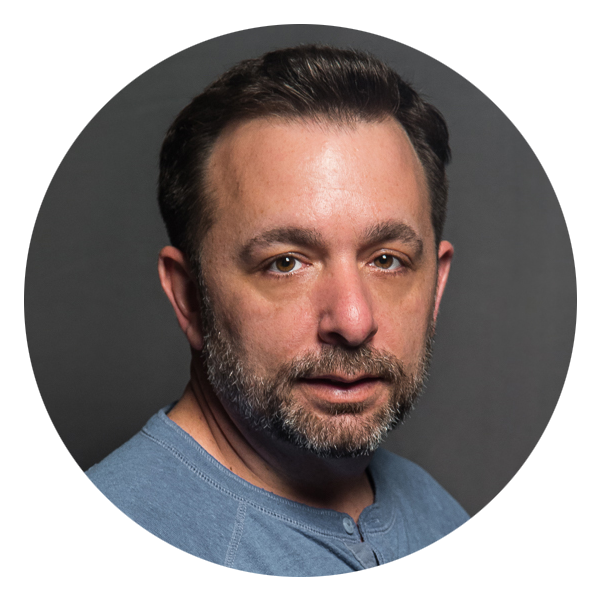 Concert Photography Tips from a Pro

DEVELOPING A SHOOTING STYLE, AND TELLING A STORY

Your shooting style will evolve every time you press your shutter, every time you look at your photos. If it doesn’t, you aren’t growing. The greatest compliment another photographer can give me is when they tell me they see a concert photo and know it is mine without looking at who took the photo. It’s my style, and that means I am making an impression on the people who view my photos.

Your composition, your lens choices and shooting angles, and in particular, the moment you choose to press the shutter all contribute to a concert photographer’s visual style. You bring part of yourself, and your shooting experiences, to every new subject or situation you photograph. 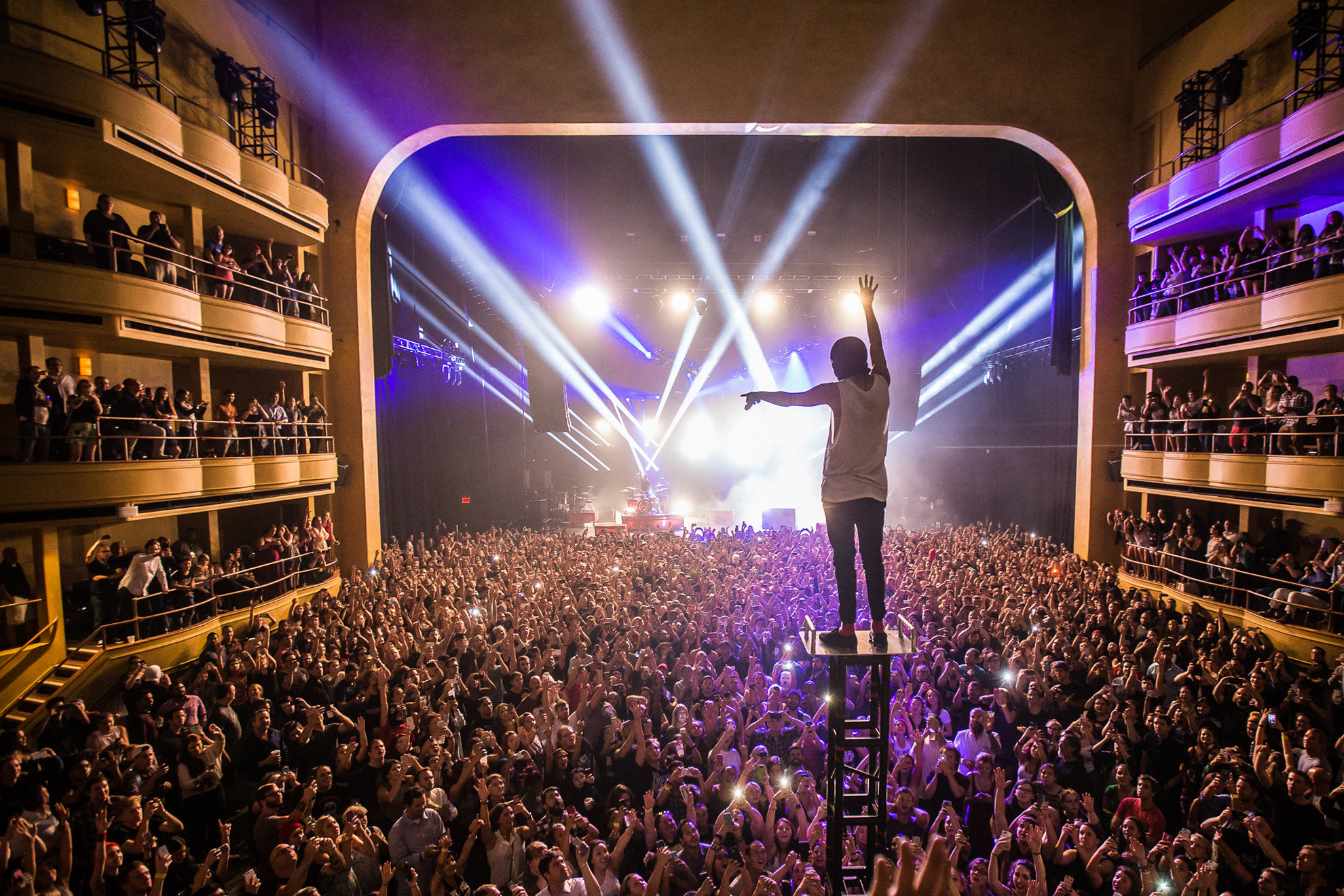 WORK QUICKLY, AND MAKE THE MOST OF THE TIME AVAILABLE

Shooting for anyone other than the band will likely mean you shoot following the three song rule. If you do not know what that is by now, it is where you are given a photo pass and access to shoot the band from the photo pit for the first three songs of their set, usually without flash. Most photographers will complain about this and wonder why we have these restrictions. Get past that and learn to work around it. One of my best photo sets I have ever done was when we were limited to the first 30 seconds of songs two and three. Process that for a minute. And when that minute is over realize that I had that same minute to get the shots I needed to tell a story about the night. While I was disappointed when presented with those rules, I faced the challenge and made the best of it. My editor did not believe that the photos I turned in were shot in one minute. One of those photos can be found in my first article: The Black Keys at Roseland Ballroom. I still smile when I look at the photo set on my site. If I can tell a story in 60 seconds of shooting, you can do it in three songs.

LEARN ABOUT THE MUSIC YOU ARE SHOOTING

If you are working with a band directly especially, listen to their music and learn it. The more you know about their music, the better you will shoot the band. Every band brings a different energy to the stage. Some bands are rather relaxed onstage and there is a tone to that which carries throughout their set. For a band like this it may be a little harder to tell their story, but there is still a story to be told. They may be more static, rather than dynamic, for the majority of their set. But that is their tone, and that is the story you can tell. Your photos may be very technically sound. Use the stage lighting to your advantage. Use the lights and any other elements onstage to incorporate into your photos. Other bands bring a high energy to the stage. You can hear it in their music. And bands like this usually turn up that energy onstage. The more you know about their music, the more you will be able to capture their energy. You will have less time to frame your shots perfectly, but with a band like this you need to be more focused on capturing the energy and excitement of their set. Your photos may be a little less technically perfect, but that’s okay. 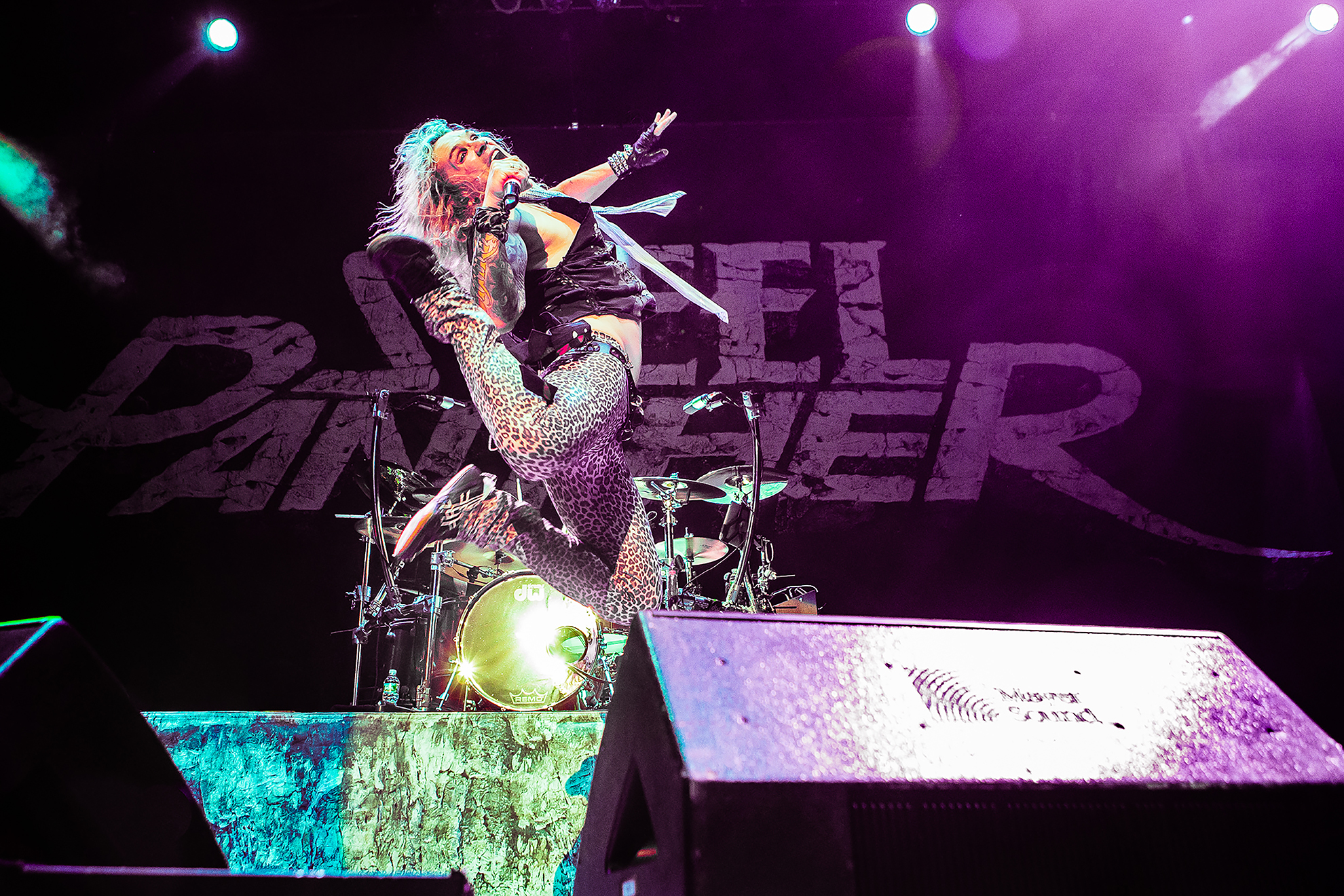 Music photographers cover quite a lot of concerts, so it will be nearly impossible to know the music of every headliner, and especially of every opening act at every show. But you don’t always need to. You must have an understanding of basic music structure: verses, bridge and chorus, and even understand bars and measures. Very little happens during a verse of a song. There isn’t much excitement happening onstage. Photos will be a bit bland. That’s usually when I look for something interesting. Maybe a cool pair of polka dot sneakers on the lead singer or cool lights shooting through the drum kit. But when that bridge happens or that chorus starts up, I know the energy picks up onstage. And if you understand music structure you can shoot a band you have never even heard of and know when something is about to happen in the song. A basic understanding of music is as important to a concert photographer as an understanding of photography.

Vary your shots; shoot the crowd; shoot the drummer. These are just three tricks to telling a story at a concert. When you present a photo set to your editor you don’t want 15 tight photos of the lead singer and tight photos of the other band members. Look for things in your periphery. A photo of the lead singer who also plays guitar is great, but take that same photo, frame it wider to include the drummer with his hands raised in the air in the background to make a good photo a great photo that tells a better story. 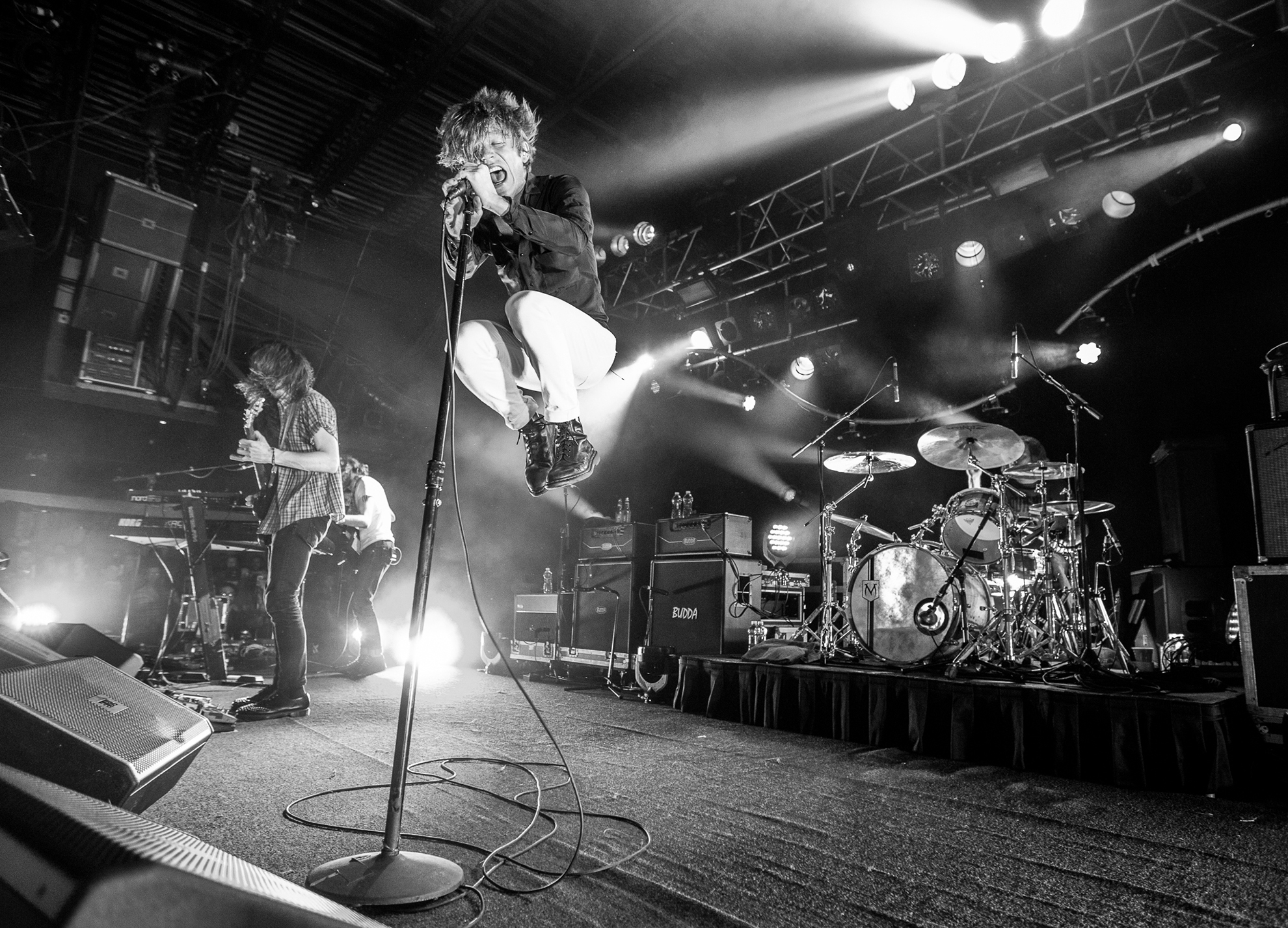 Make your artists look good, whether you are shooting for the band or for a publication. No artist wants to look bad and they, or their management, won’t forget the photographer who did. Avoid bad angles, make sure the artist doesn’t have a double chin and don’t shoot from so low of an angle that you shoot “up the nose.” Shots like that expose you as a rookie concert photographer. I cannot tell you how many times I am in a familiar photo pit, and inexperienced photographers alongside me are on their knees, shooting almost straight up at an artist. Remember that artists are people and things happen. Wardrobes malfunction. It’s not your job to exploit that, no matter how tempting it may be. They will make funny faces. Have you ever seen yourself on a video after a night of karaoke? Make sure you can see the difference between emotion on a face and a funny face. Publishing one of those photos will be the difference between getting hired again or not getting hired at all. 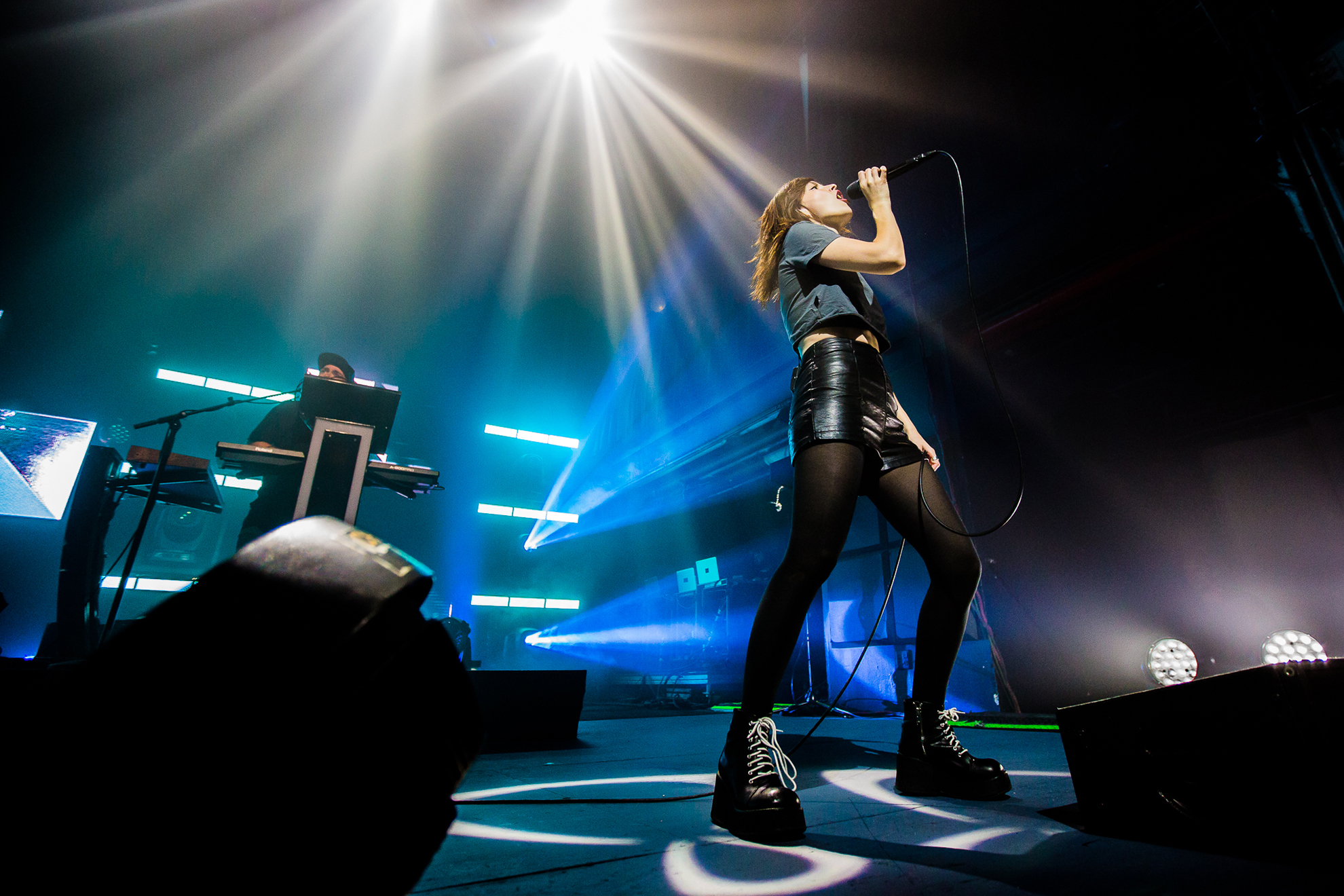 ETIQUETTE IN THE PHOTO PIT

This is a topic that, amongst music photographers, can be a hotly debated argument, and we can write an entire article on this subject alone. The key to proper etiquette in the photo pit is common sense. If you operate politely in your environment, you will likely have good photo pit etiquette.

The photo pit can be very crowded depending on the band and venue. Every photographer wants what they think is the perfect spot in the pit. I have seen photographers get into the photo pit early, place a step stool down in their “spot,” and never leave that spot for all three songs. Besides a boring photo set with images shot from the same location, you are theoretically blocking photographers from getting photos from that spot. Spend some time in one spot, and then move along to a new one. If every photographer in the pit moves around through the first three songs, everyone will get a chance to properly vary their photos and shoot from each spot. I usually spend the first song on one side of the lead singer, the second song on the other side and the third song moving throughout the photo pit.

Try not to be the photographer standing up against the stage holding their camera over their head blocking every other photographer from getting a shot. If you must, for some reason, feel the need to do this, look behind you and see if anyone is there. Or better yet, stand in the back of the photo pit when you do this and you won’t prevent a fellow photographer from doing their job.

Don’t step in front of someone’s camera as they are shooting. I know it sounds like common sense, but you would be amazed at how many photographers show no regard for the people they are working with.

Finally, try not to make the photo pit smaller than it already is. A basic camera bag that holds one body and two lenses is still pretty big. A backpack that holds two bodies and three lenses is very big. Store your bag under the barricade. A huge backpack on your back as you move through the photo pit will basically double the amount of space you occupy in the photo pit. And no matter how much control of it you think you have, you will knock into photographers and their equipment at every show, most of the time not even realizing it. If your concern is that leaving your bag unattended puts you at risk for getting something stolen, then get insurance. Equipment theft by other photographers is rare.

Etiquette in the pit is very much a “pay it forward” theory. If all photographers are aware of their fellow concert photographers, everyone will leave the pit with better photos to present to their clients.

In writing this series of articles, I have, for the first time, written down on paper a lot of different techniques, theories, tricks and general knowledge I have gained over the past eight years of shooting concerts. I did not invent or create most of these; I have studied the art of photographers who have come before me, modified techniques to better fit my shooting style, and learned how to adapt with the changes in equipment. I hope that in years to come you look back at this article not as a textbook for what to do as a concert photographer, but a baseline that helps you to grow into the best photographer that you can be. Photography is not about technique and equipment. But once you learn proper technique, and how to best use the equipment you are given, you will be able to grow and develop as the concert photographer that only you can be.