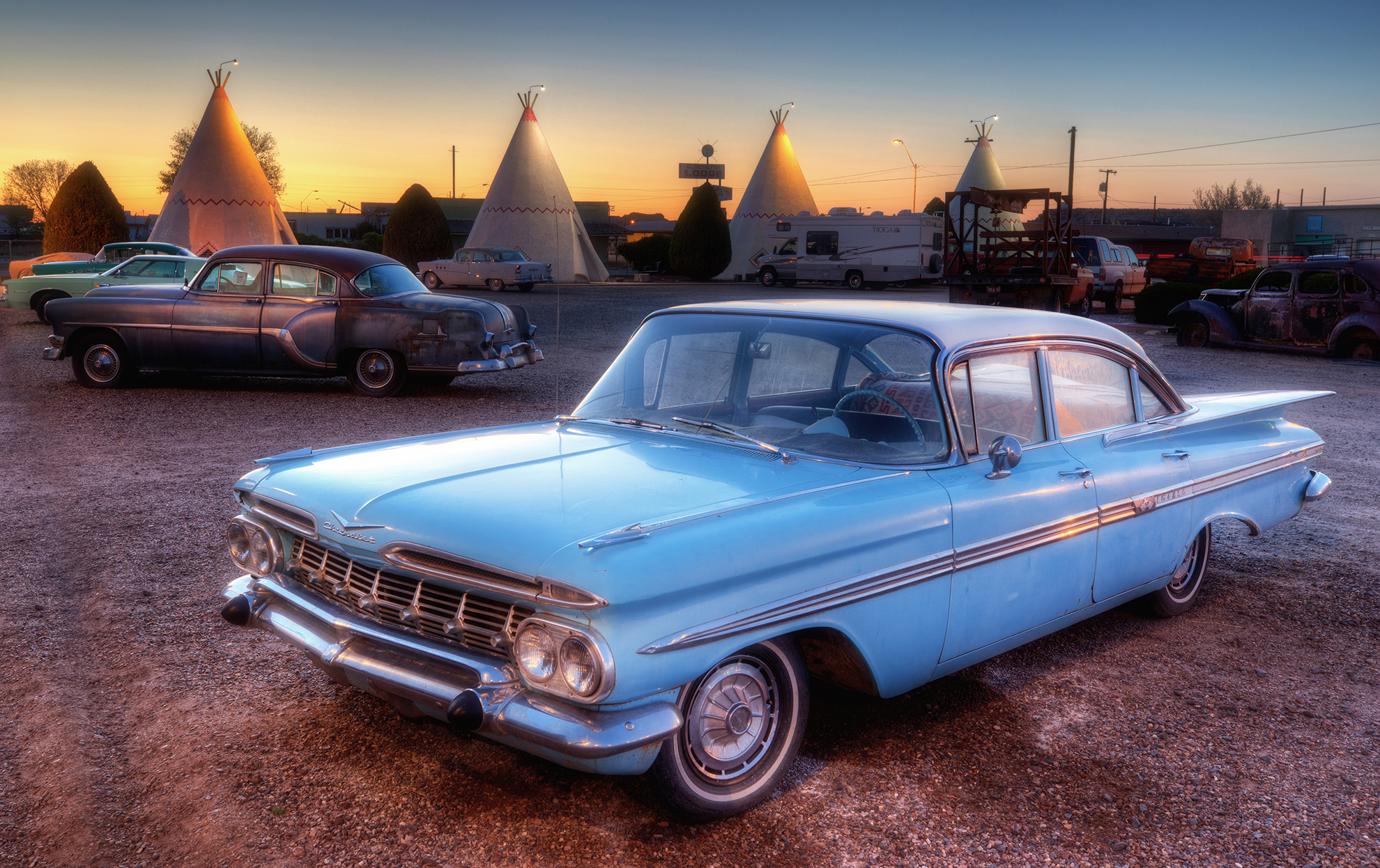 This is Part I of my three-part Route 66 series here in the Canon Digital Learning Center.

Four years ago, after returning from my first trip on the most popular part of Route 66, I posted a series of articles on my blog: Six Days on Route 66 with the Canon EOS 6D. You can still find these posts by doing a Google search.

My wife Susan and I had such a good time on the trip that we decided to revisit the same places with the goal of trying to make different types of images. I was especially excited about the road trip because I would be photographing with new gear: a Canon EOS 5D Mark IV, Canon 8-15mm fisheye zoom lens and Canon 16-35mm lens. For me, new gear is also an inspiration.

On a full-frame camera like my EOS 5D model, that 16-35mm lens gives true wide-angle zoom coverage, from ultra-wide at its 16mm setting, to a traditional modest wide-angle look at 35mm. With cameras having smaller APS-C imaging sensors, like one of Canon’s EOS Rebel or EOS 7D-series cameras, you’d get similar wide coverage with a lens like the Canon EF-S 10-22mm (or equivalent) lens. That wide coverage is the reason why I shoot with a full-frame camera.

Let’s get on the road!

Setting goals in photography is very important. One of my goals was to get a sunset shot at the Wigwam Motel in Holbrook, Arizona. Because I wanted to show one of the vintage cars in the motel’s parking lot along with the wigwams and sky, I knew HDR (High Dynamic Range) was the way to go in this high-contrast situation.

Under these lighting conditions, the Canon 5D’s in-camera HDR (set here to EV 0, EV -2 and EV +2) captured the details throughout the scene. To add some color, I chose the Art Vivid effect. To steady my long exposures in the low light situation, I set my camera on a tripod and used the camera’s self-timer to release the shutter to avoid camera shake. 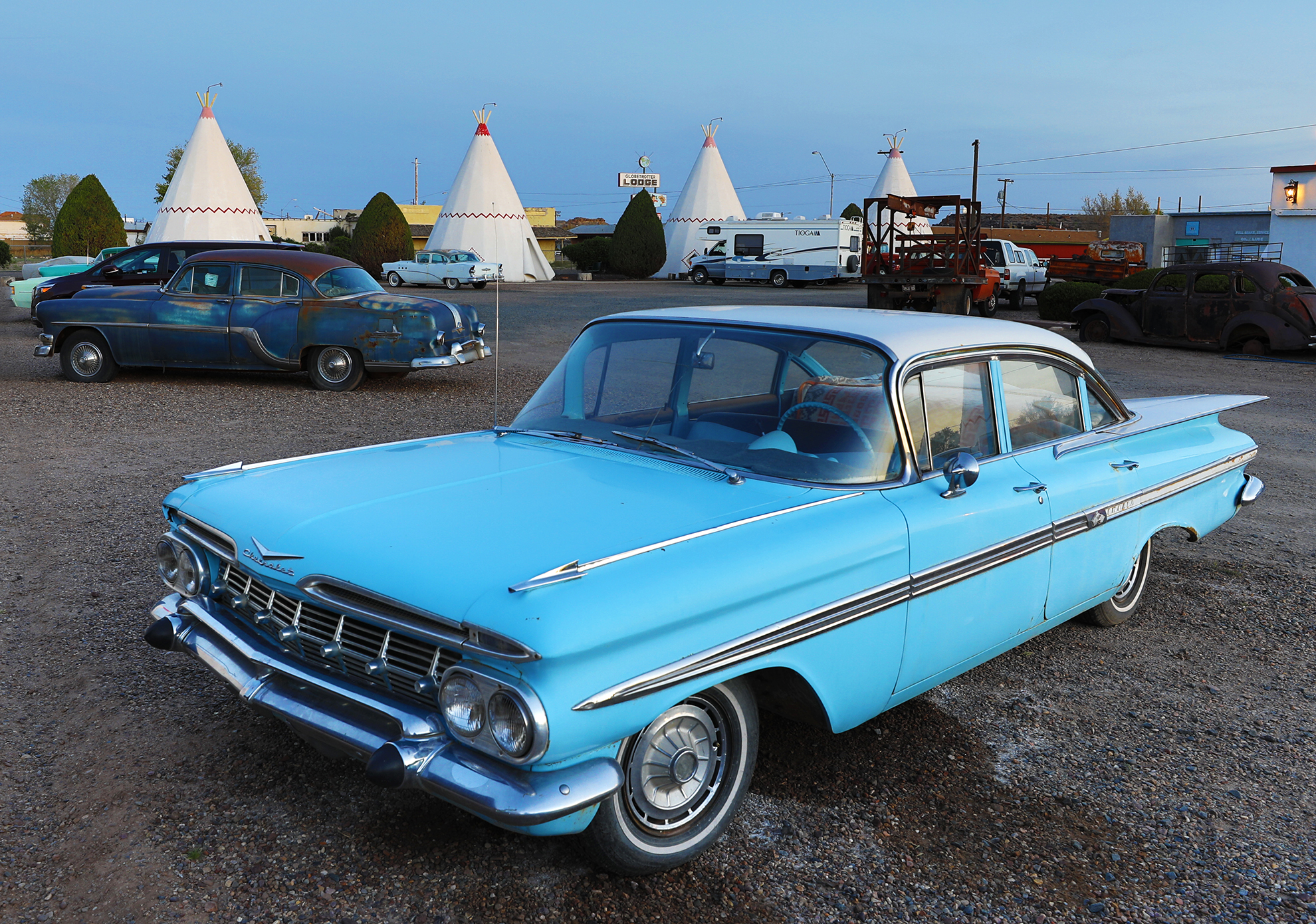 No rest for the weary. After capturing my sunset scene, I woke up early the next morning for a sunrise shoot. Here is the same scene photographed shortly before sunrise, when the light was soft and pleasing. Again, I used the 5D Mark IV’s in-camera HDR feature (same settings as the night before). As with the opening image for this article, I used the Canon 16-35mm lens, which was my go-to lens on the road trip. 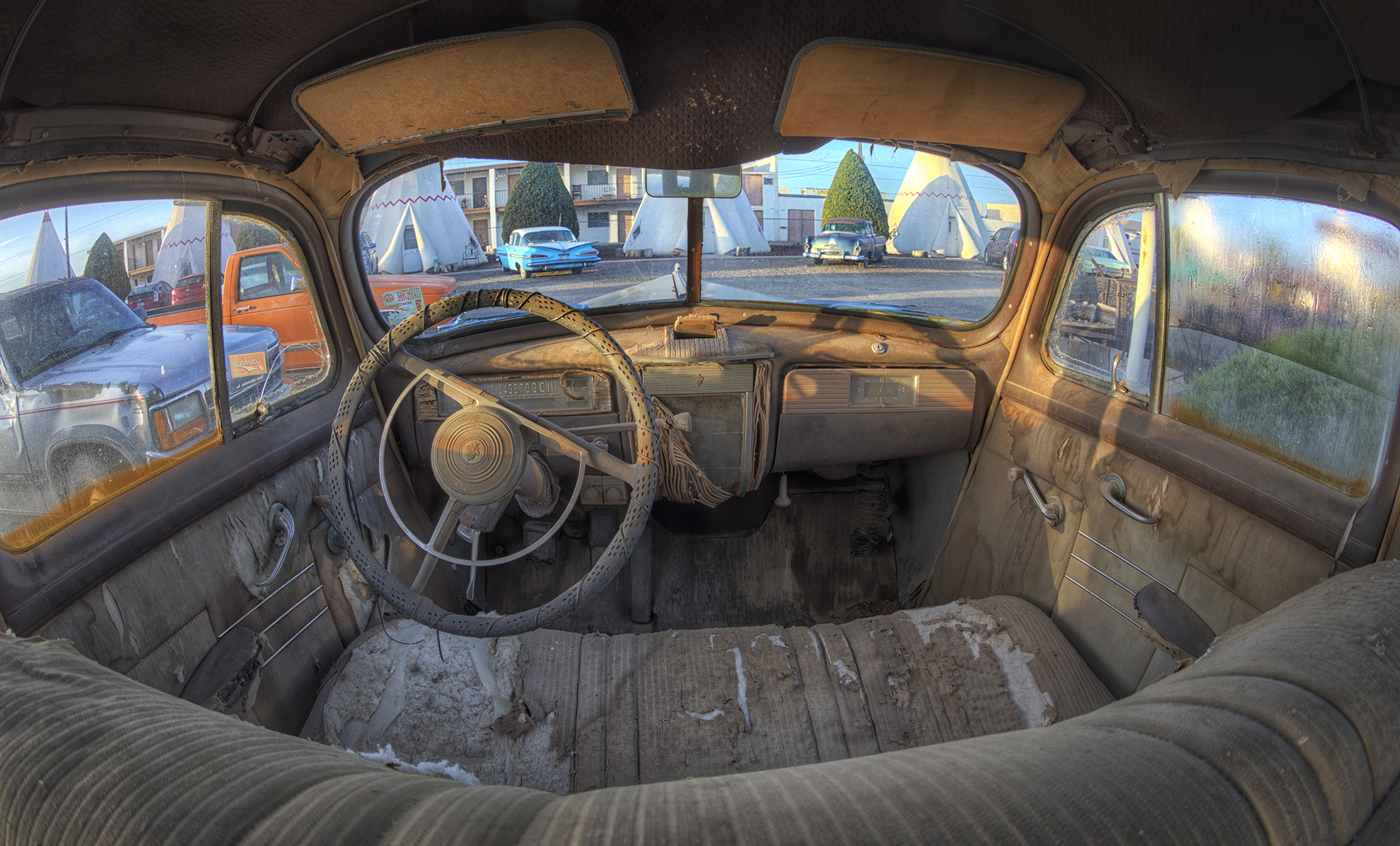 This is another HDR image taken at the Wigwam Motel. Here, I used my Canon 8-15mm fisheye zoom lens, set to 15mm. The contrast range of the scene was too great to be captured with in-camera HDR, so I used the camera’s automatic bracketing feature, selecting a seven-stop bracketing sequence from EV –7 to EV +7. Instead of using the 5D Mark IV’s built-in HDR in this case, I processed my exposures in Photomatix software to create the image you see here.

Here are a couple of things to keep in mind about the built-in HDR feature in cameras like the EOS 5D Mark IV, and other recent Canon EOS models as well. First, there are separate built-in HDR settings and traditional Auto Exposure Bracketing settings. They’re independent of each other, and can’t be used simultaneously. And, the standard AEB allows you to shoot up to 7 bracketed images, at up to +/- 3 stops variation between each frame. When you shoot with standard AEB, those bracketed shots are simply written to your memory card, and cannot then be processed in-camera into an HDR image.

With the built-in HDR setting — separately activated — the system always shoots three bracketed frames; you select a 1, 2 or 3-stop variation; and higher-end cameras like the 5D Mark IV and EOS 7D Mark II allow you the choice to save the original bracketed files along with the finished HDR file, or just the processed HDR file only. Once you enable Canon’s built-in HDR, the camera always generates a finished, processed JPEG final HDR image file from the three initial bracketed exposures.

I made this photograph with my camera set on a tripod that I placed on the floor in the back seat of the car. Live View made composing the scene easy.

Here is an Adobe® Bridge screengrab of the exposures I used for my HDR images — again, the finished HDR image was created in the computer, using Photomatix software. As it turned out, I did not need to use the most overexposed image in the sequence to see into the shadows. I only used six images for my final HDR image. 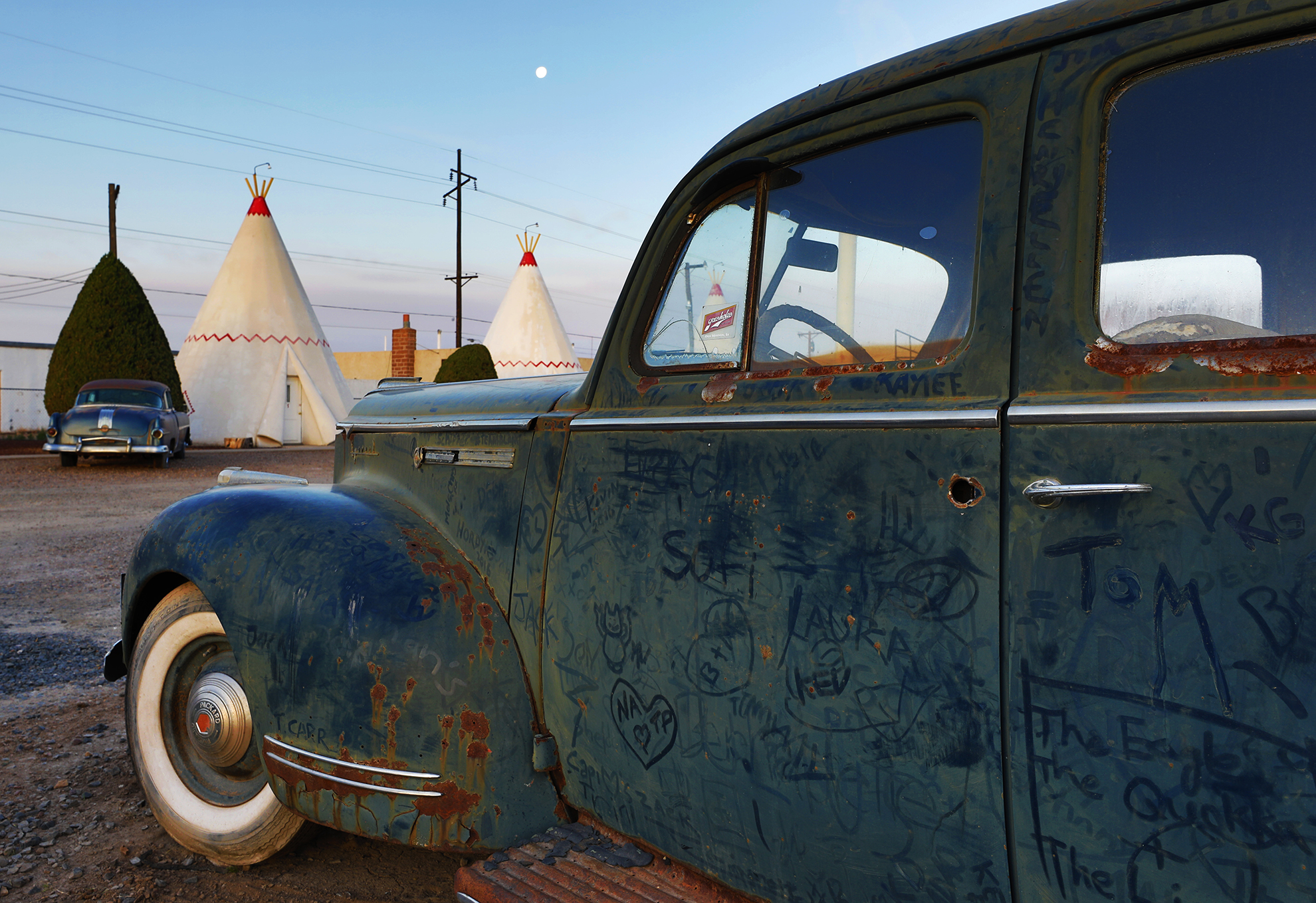 Here is a view of the outside of the car in the previous photograph. It’s an in-camera HDR image. Notice how everything in the scene is in focus. To achieve that goal, I used a wide-angle lens, small aperture and set my focus (using the camera’s touchscreen) one-third into the scene. 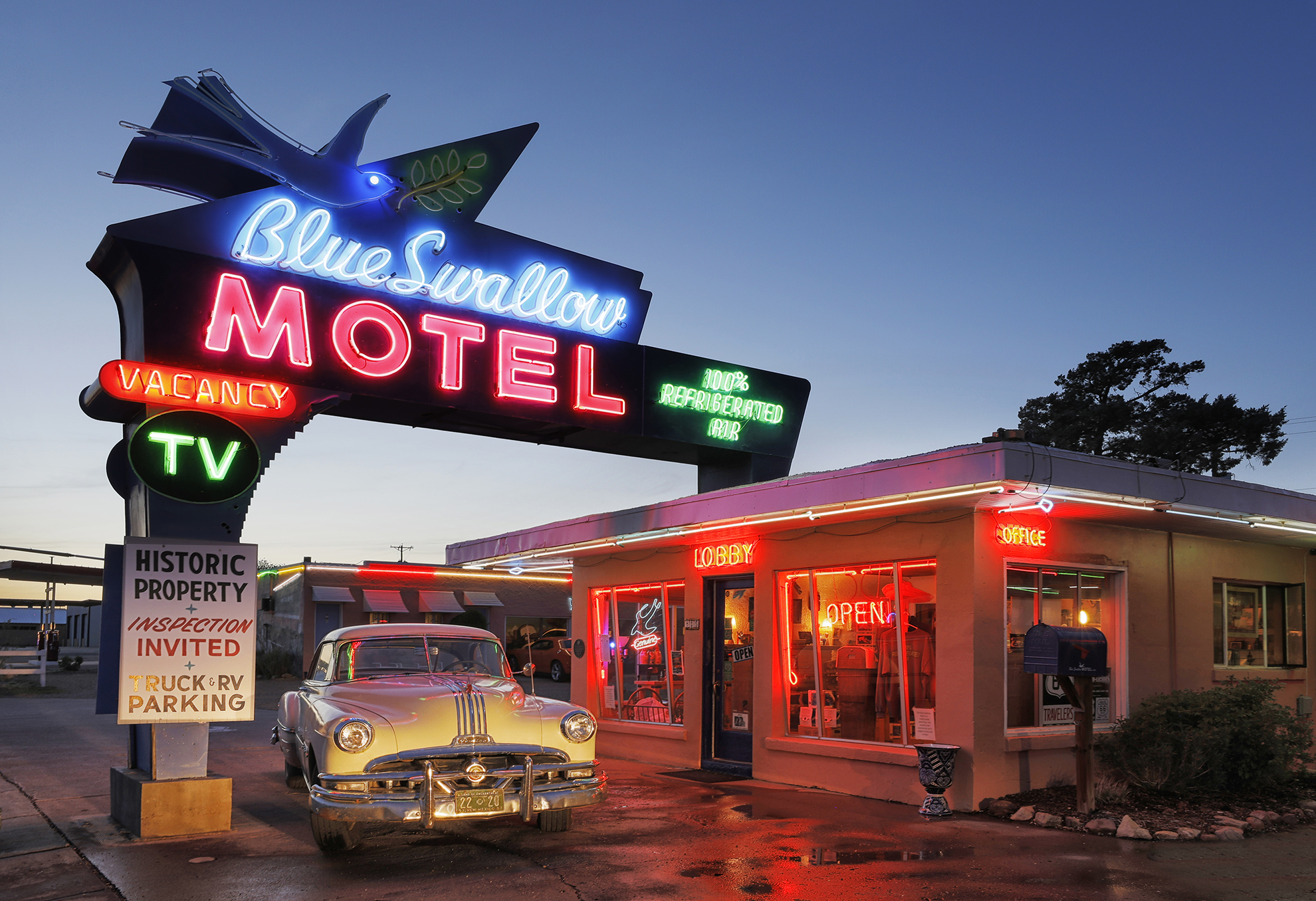 That’s me making the preceding photograph. As photographers, we often need to make pictures, and not simply take pictures. 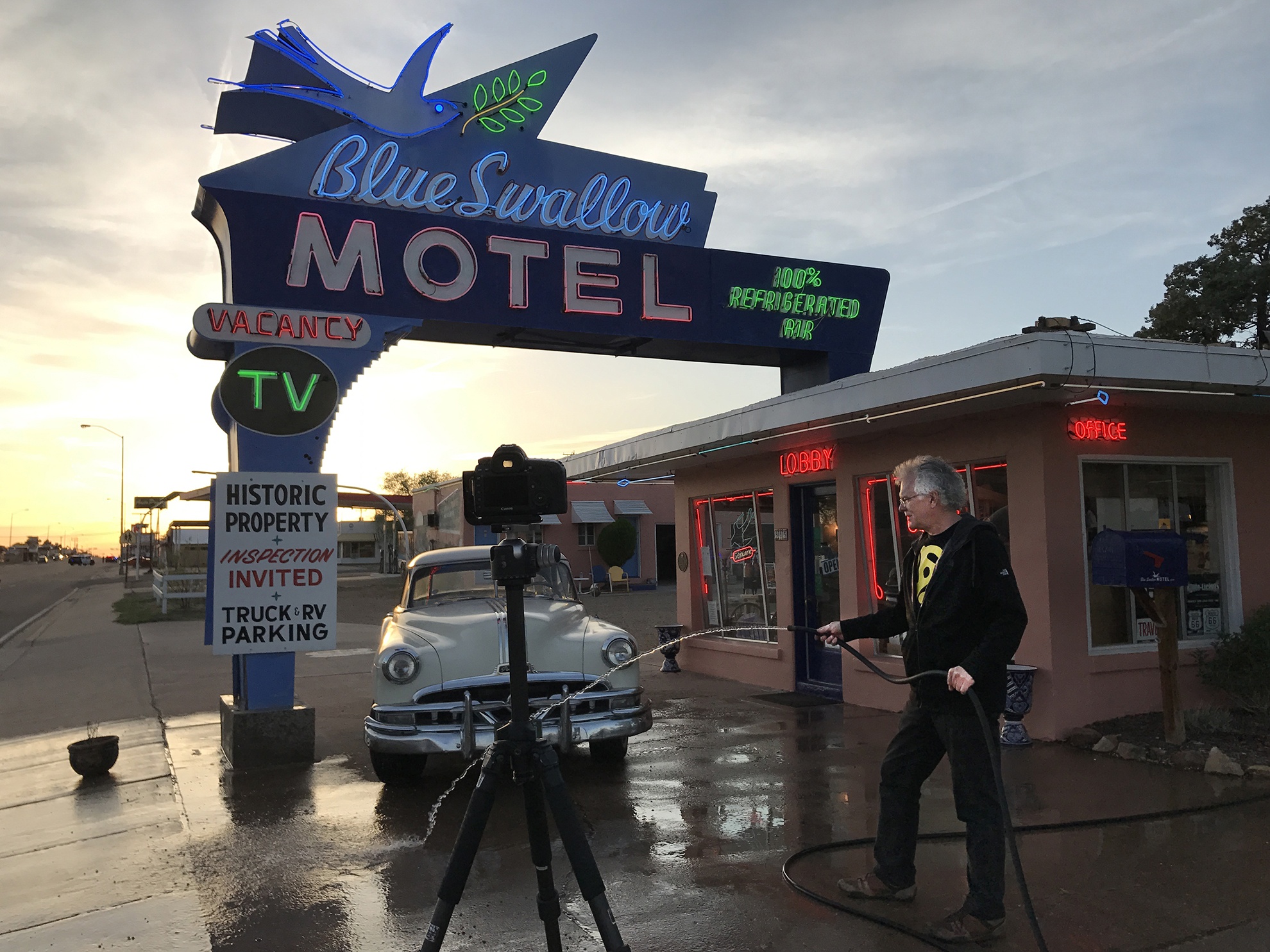 On our previous Route 66 road trip, we missed seeing and photographing the world-famous Blue Swallow Motel in Tucumcari, New Mexico at night with the neon lights turned on.

Here is a quick tip: Photograph during what’s called the “blue hour,” when there is still some light in the sky.

In high-contrast scenes like this one, after I take a photograph, I check the 5D Mark IV’s Highlight Alert to ensure that no areas are overexposed. If I get “blinkies,” I dial down the exposure until the highlights are preserved. My setting here: Canon 16-35mm lens, f/9.0, 1/15 second (hand held), ISO 400. 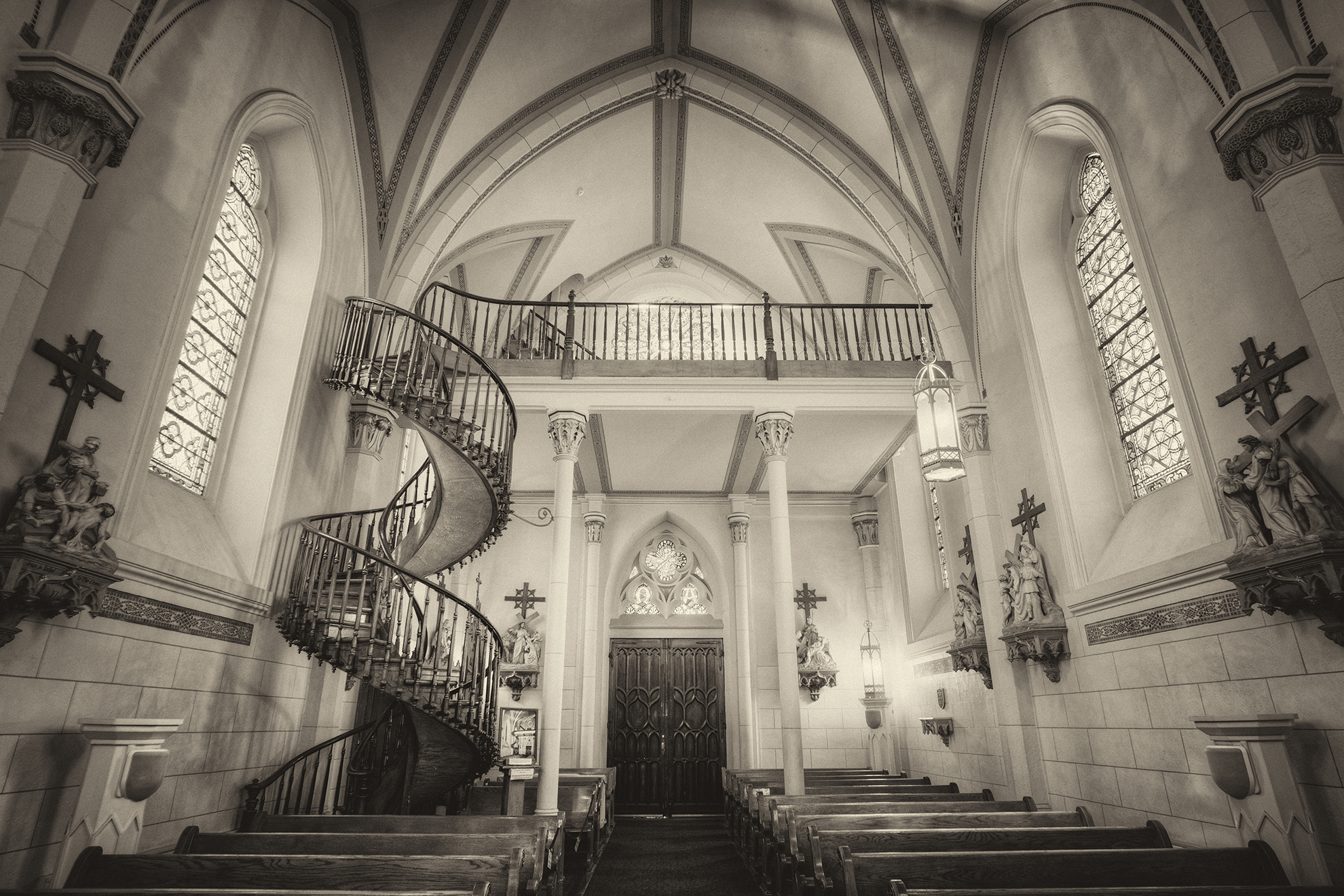 I always shoot in RAW, because the RAW files produced by the EOS 5D Mark IV show amazing detail in the shadow and highlight areas of a scene. However, I sometimes choose the Monochrome Picture Style (one of several Picture Style settings you can set with any recent Canon EOS DSLR) to get an idea of what an image will look like in black-and-white. That’s what I did for this photograph of the Loretto Chapel in Santa Fe, New Mexico.

When you choose the Monochrome Picture Style and are set for RAW images, you still get a full-color image, because the camera records an actual RAW file. The image will be displayed on the camera’s LCD monitor in black-and-white during playback, and if you process your RAW files in Canon’s Digital Photo Professional (DPP) software, it’ll initially open as a monochrome image as well (you can always completely change a RAW image’s Picture Style setting within DPP if you want or need a different look). Most third-party RAW process software will typically ignore camera settings such as Canon’s Picture Style, and display such an image in full-color when you open it; you’d use that RAW process software’s commands to process it as a black & white shot. When you shoot a JPEG image in-camera (or record video), the chosen Picture Style setting is applied directly to the file.

After taking the photograph, I created a sepia image in Adobe’s Lightroom®. To me, a monochromatic image captured more of the mood of the scene than a color file. When it comes to a photograph, mood matters most. 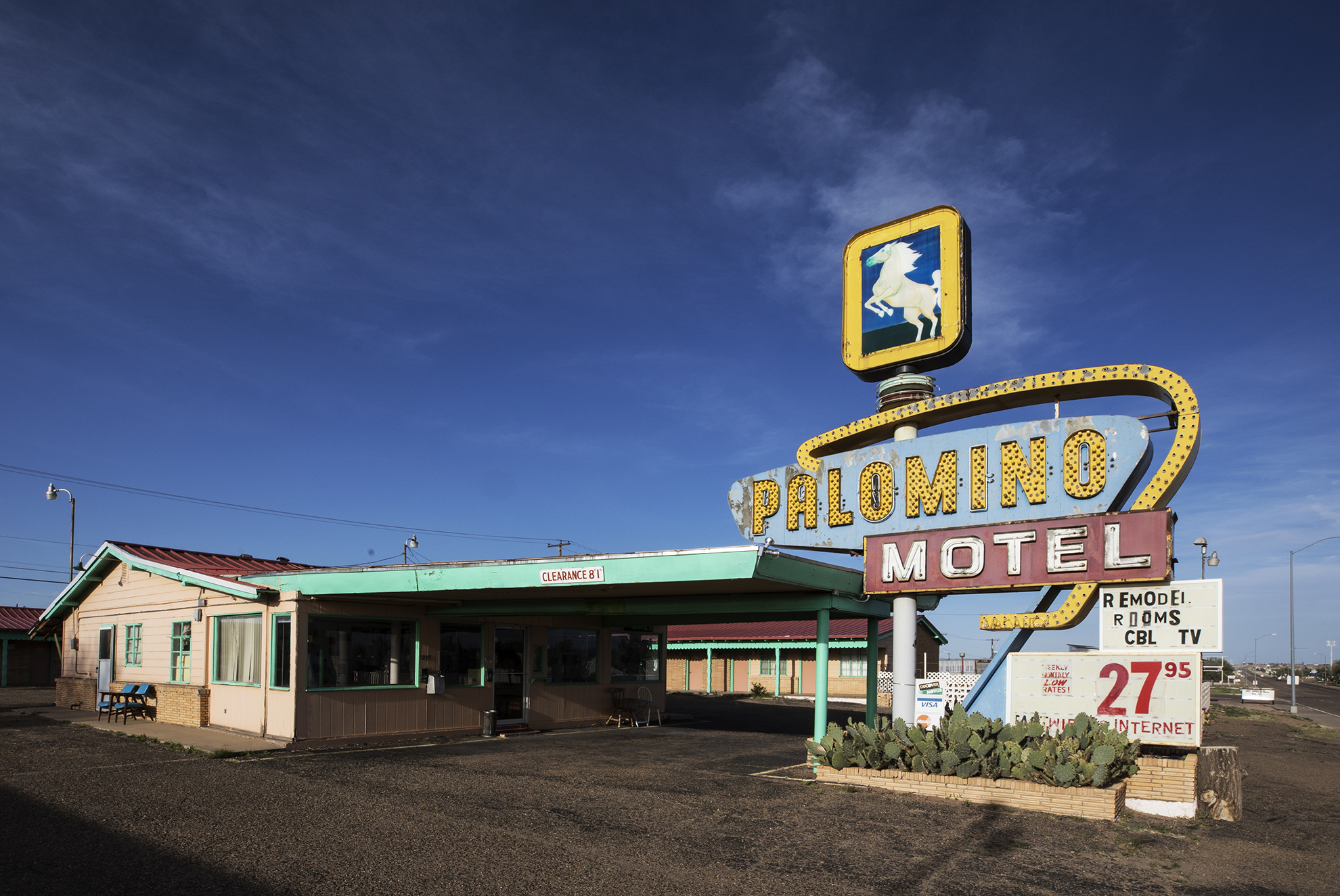 The Palomino Motel is a landmark in Tucumcari, New Mexico, so I had to get a shot. Here too, everything in the scene is in focus. This shot was taken with the lens stopped down to a very small aperture — f/18 — which ensured that this wide-angle view would be sharp from front to back. What’s more, as with my outside view of the old car at the Blue Swallow Motel, I shot at an angle. Shooting at an angle adds a sense of depth and dimension to an image, and gives the opportunity to visually emphasize that impressive sign, since it’s closest to the lens.

For both shots, I used the 5D Mark IV's Live View feature, which helps in accurately composing a scene.

If you make a Route 66 road trip, you must stop at Red Rock State Park near Gallup, New Mexico. If you arrive around sunrise, you can capture some of the beautiful rock formations in soft light.

I will talk more about the Canon 5D Mark IV’s exposure modes in my follow-up articles. For now, about 95 percent of my photographs are taken in the Av (Aperture-priority) mode. I used it here to get the entire scene in focus with my aperture set at f/7.1 and with my Canon 24-105mm IS lens set at 28mm. 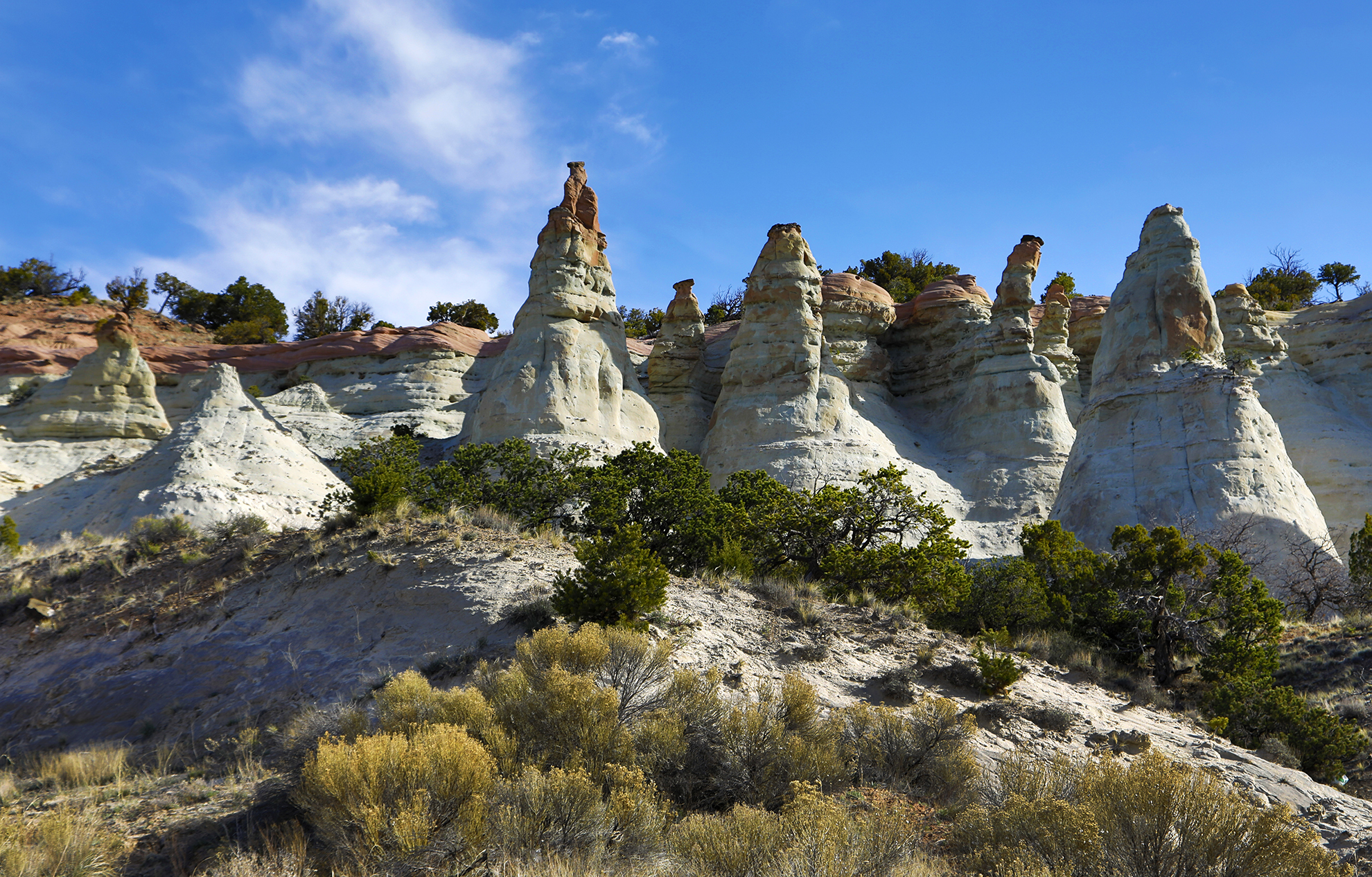 In landscape and cityscape photography I usually like my pictures to show the entire scene in focus — the way the scene looks to my eyes. Setting a small aperture and shooting with a wide-angle lens helps achieve that goal. This shot was taken at f/8, which is often enough with a wide-angle lens to get that extended sharpness — especially when you’re not focused upon a foreground object that’s especially close to the camera. 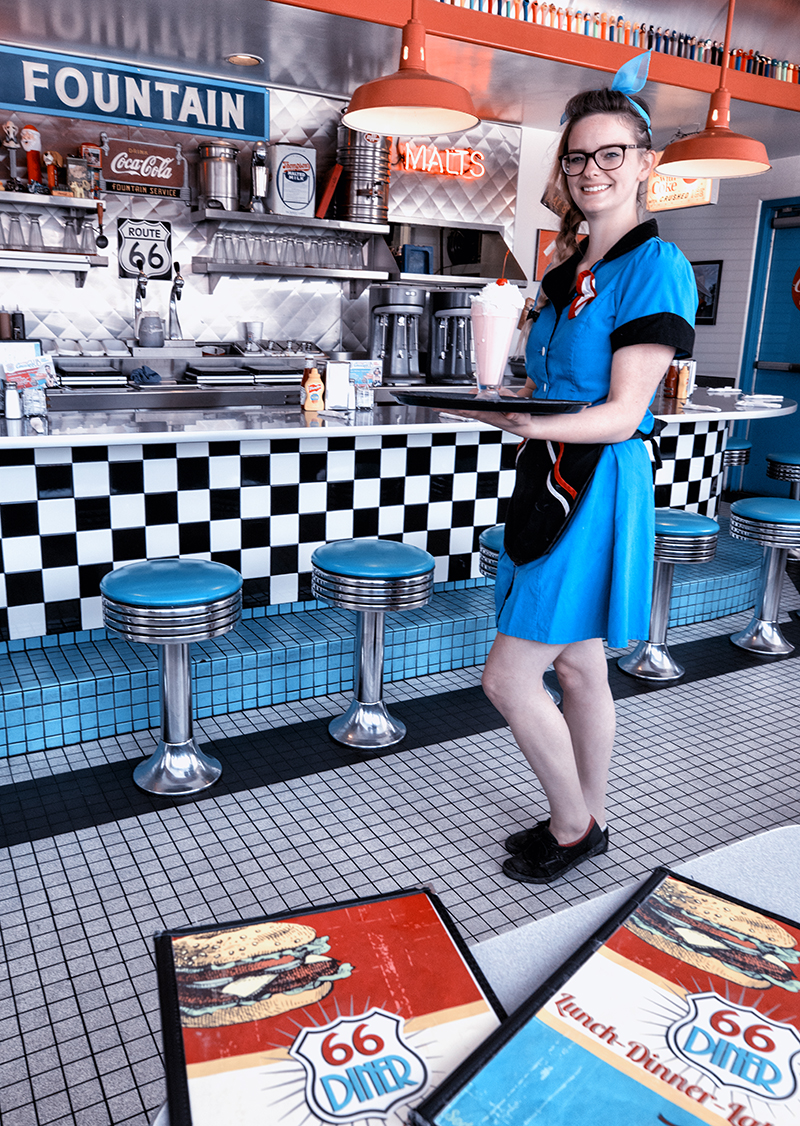 People pictures make slideshows, portfolios, galleries and web articles come alive. When it comes to people pictures we basically have two choices: take a portrait, or create an environmental portrait — that is, a picture of a person in his or her environment.

I photographed this waitress in the 66 Diner in Albuquerque, New Mexico, another iconic location on Route 66. To get a steady hand-held shot with good depth of field, I set my ISO at 1000, which gave me an aperture of f/10 and a shutter speed of 1/80th of a second. My Canon 16-35mm lens was zoomed to 24mm — wide enough, on a full-frame camera, to capture the essence of the diner, but not so wide that perspective distortion became a major concern.

Using the camera’s AF positioning controls, I placed the focus on the subject’s face, the most important part of the image. 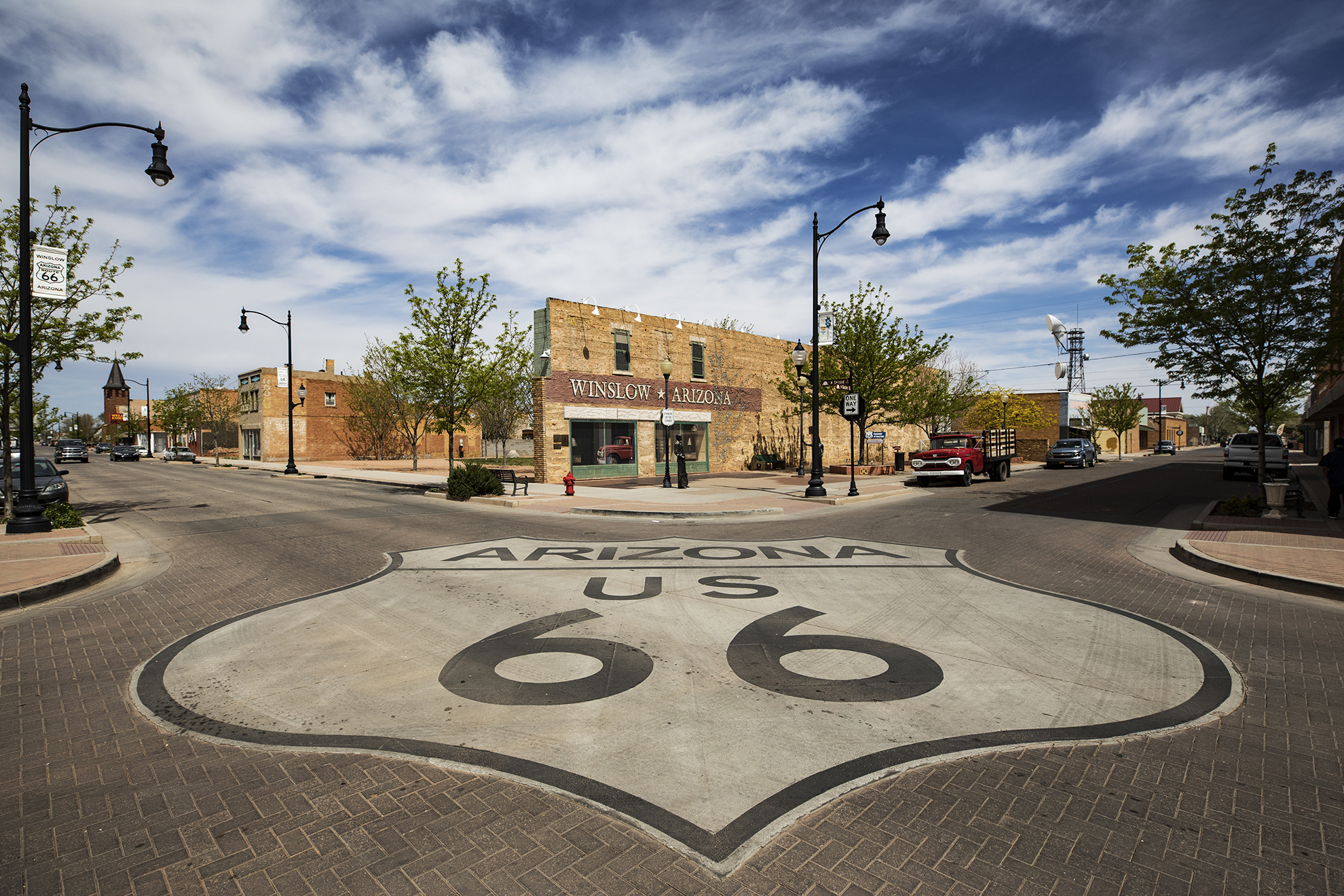 You can’t make a Route 66 road trip without standing on a corner in Winslow, Arizona made famous by the Eagles’ song, “Take It Easy.”

My first photo tip here is this. After you take a picture, use your camera’s magnification button and dial (or pinch feature on the LCD monitor) to zoom in on the image to make sure important elements of the scene are in focus.

My second photo tip is to take it easy . . . and have fun! Sure, try to get the best in-camera shot and work at processing your images. But don’t forget to have fun, which is probably why you got into photography in the first place.

This photograph was taken with my Canon 16-35mm lens, which is rapidly becoming my favorite street photography/road trip lens.

I hope you enjoyed this article. Two more are coming featuring my recent Route 66 images.