This article was originally published on September 25, 2015 and has been updated to include current product information. 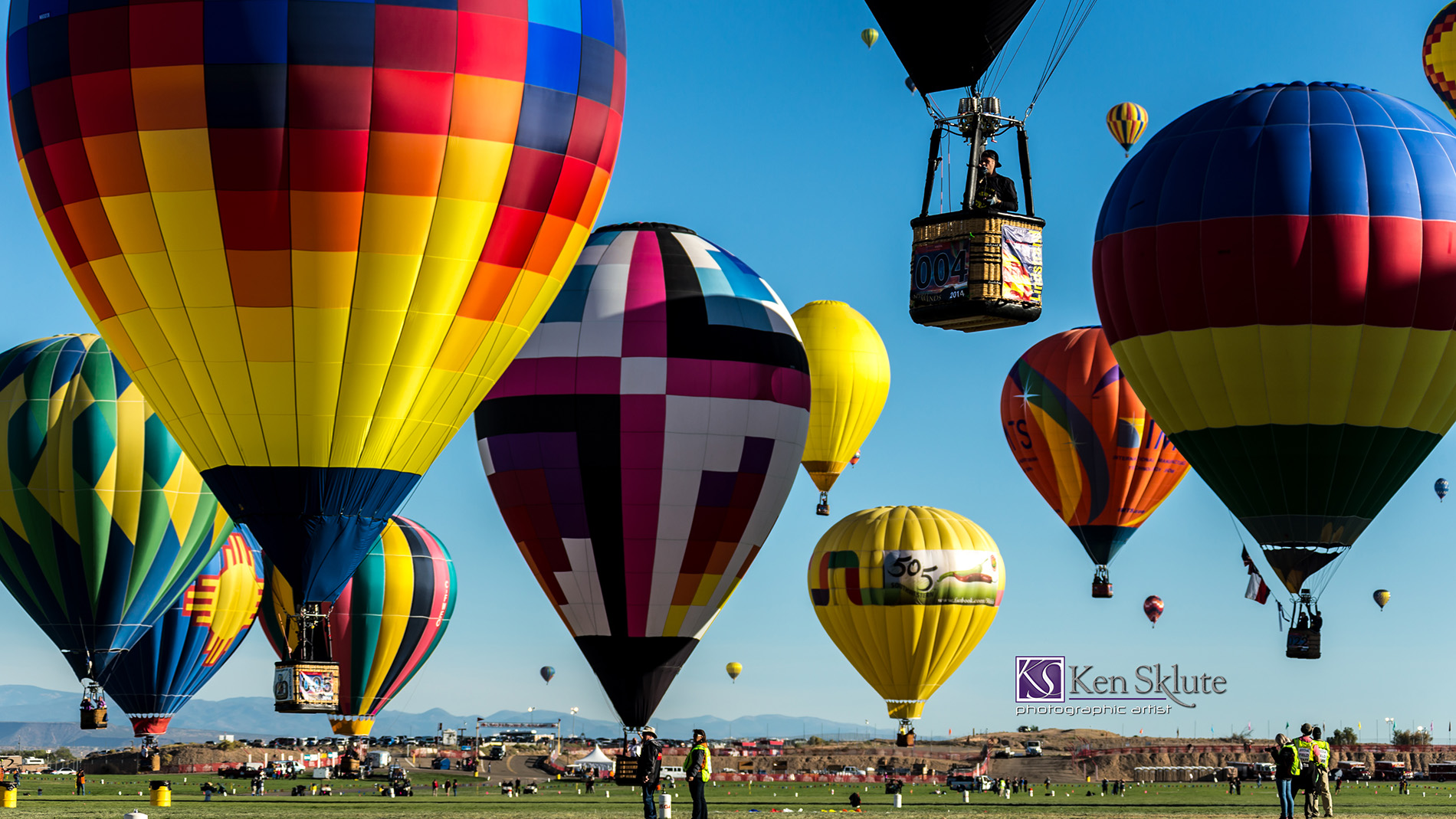 We have previously discussed how to photograph the various events that make up the Albuquerque International Balloon Festival (AIBF). Now that you are familiar with the Mass Ascension, the Glow, Dawn Patrol, and what it is like to fly and photograph, I would like to take you down a different path.

Let’s address the concept of positioning yourself to capture the best image you can from where you are now. This could mean that when you begin to analyze an image, you may select a slightly different position to shoot from, based upon the direction of the light.

Here are a few "light" tips that I always have in mind when I am out photographing: 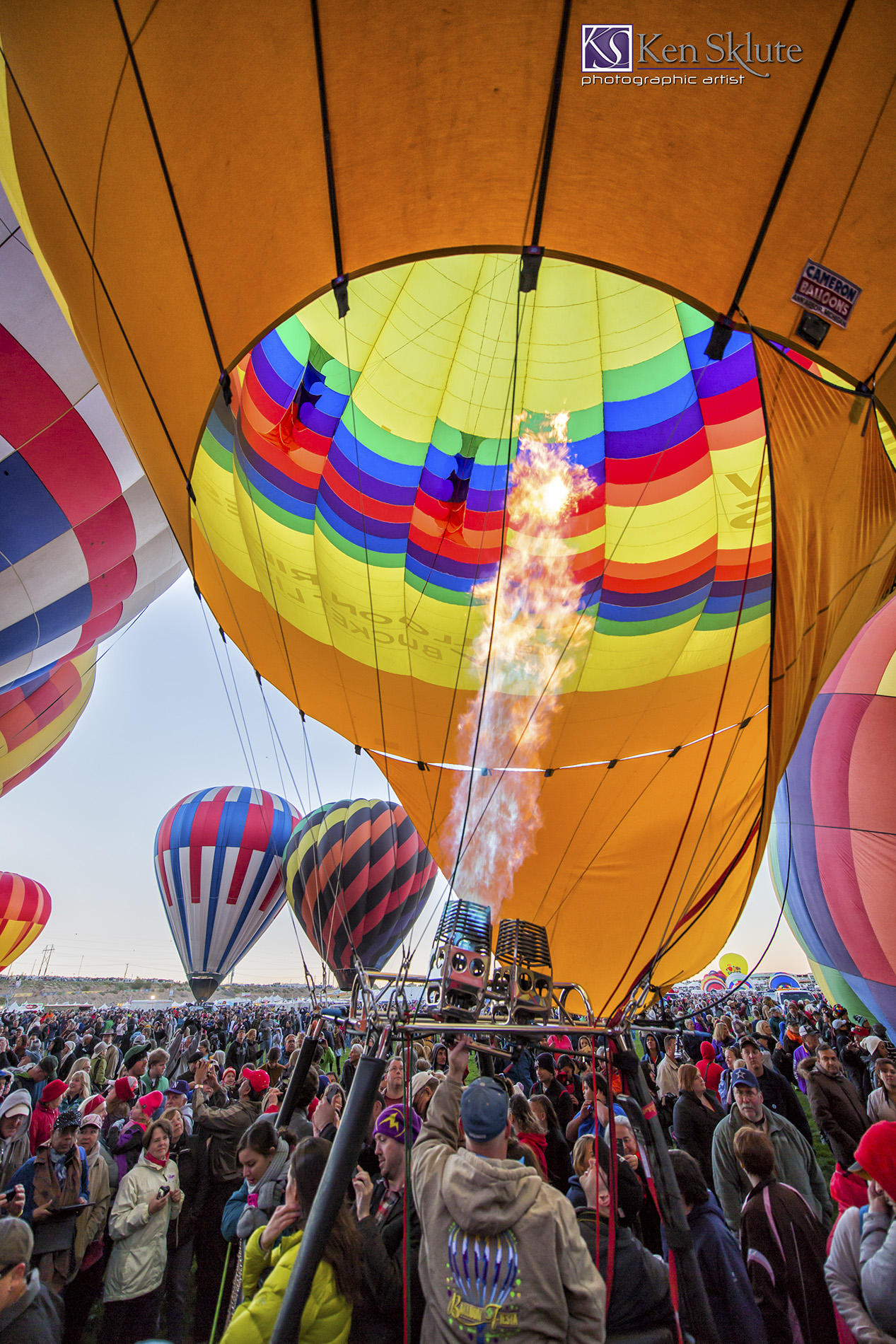 As the balloons start to inflate before the sun rises, I search for compositions that will allow me to highlight the flame from the burner. In this image, notice that your attention is drawn to the inside of the envelope and the large centered flame. Because the skirt is made of a thicker, fire resistant material, it is not as translucent as the rip-stop nylon balloon fabric. This, in turn, creates a darker frame for the lighter area inside.

When the sun is above the horizon, the lighting characteristics will change for the better. We will now be able to use the sun to our advantage in order to create depth and dimension. Use of highlights will drive your viewer’s attention to specific areas of your choosing. Similarly, there are shadows to manage so we can maintain detail in the darker areas. When everything is lit evenly by the sun, the lighting tends to looks flat. In this case, the challenge is to show the shape and texture of the balloons.

As crews start the inflator fans, fabric at the mouth of the balloon will begin to flap and roll to some degree as air moves through it. I enjoy positioning myself into the mouth of the balloon to capture the fabric and the play of light as it begins to take shape. I am always in search of diagonal shapes and curves in my compositions. Please note that care must be given when you are anywhere near the inflator fan. Standing behind the fan creates a risk of your clothing or scarves being drawn into the rotation of the spinning fan. Please DO NOT stand behind the fan for any reason. Also, standing alongside the fan can be dangerous. In the unlikely event of a fan propeller failure, debris will exit the protective cage from either side. Simply stay away from the fan. 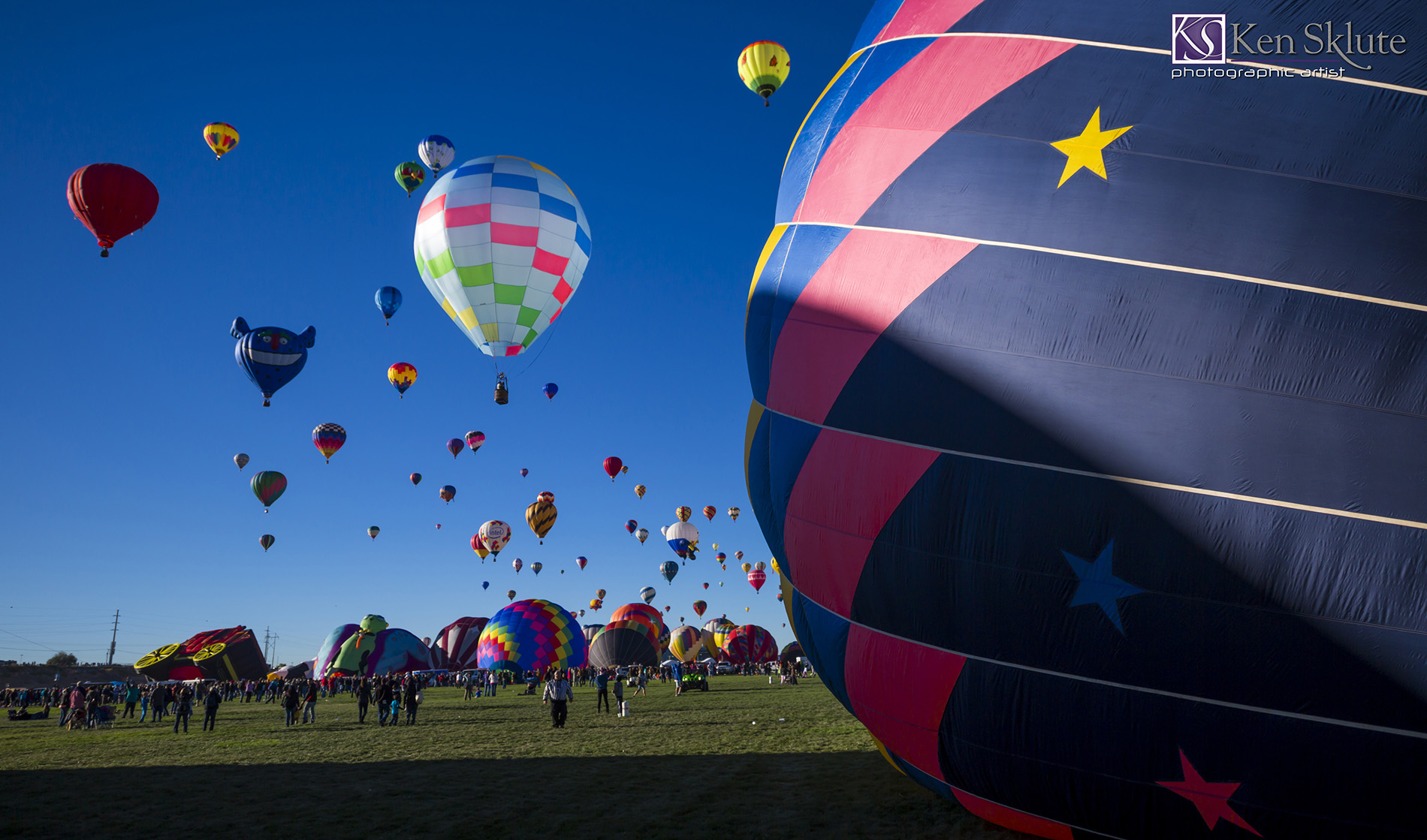 Light and shadow help when you are looking for leading lines that transport your viewer’s eye from one area to another. In this image, the play of highlight and shadow on the balloon in the foreground lead our eye to the blue balloon that has just taken flight. I chose this balloon for many reasons, although here it is easy to see that it is the lightest element in the photograph. The shadow on the ground prevents your eye from wandering out from the bottom of the frame.

Once again, light drew me to these two balloons waiting to launch. The light touches the top, creating a frame that makes it very easy to see dimension in this image. The shadow provides a darker foreground compared to the other balloons that are all nicely lit. When possible, I wait for a pilot to hit the burner, which creates a bit more of a story-telling element. I often walk through the landscape at a 45-90 degree angle from the sun in order to be able to see the depth created by the light.

I am armed with EOS-1D X and EOS 5D series cameras as well as a EF 70-200mm 2.8L IS lens some select wide angle lenses such as the EF 14mm f/2.8 or EF 16-35mm f/2.8, as I journey through the rows of inflating aerostats, hunting for compositions where I can highlight a balloon with dimensional light. My attention is often ground-based as the morning begins, but grows vertically as more pilots take to the skies. Hot Air Ballooning is a sport of slowly ascending gentle giants, so maintaining my 90 degree angle from the sun reveals gems such as a balloon launching, with its shadow falling on another balloon like an artist’s canvas. I attempt to minimize brightness in the scene so the viewer can focus their attention to the dark shadow drifting across fabric until it is no longer seen. 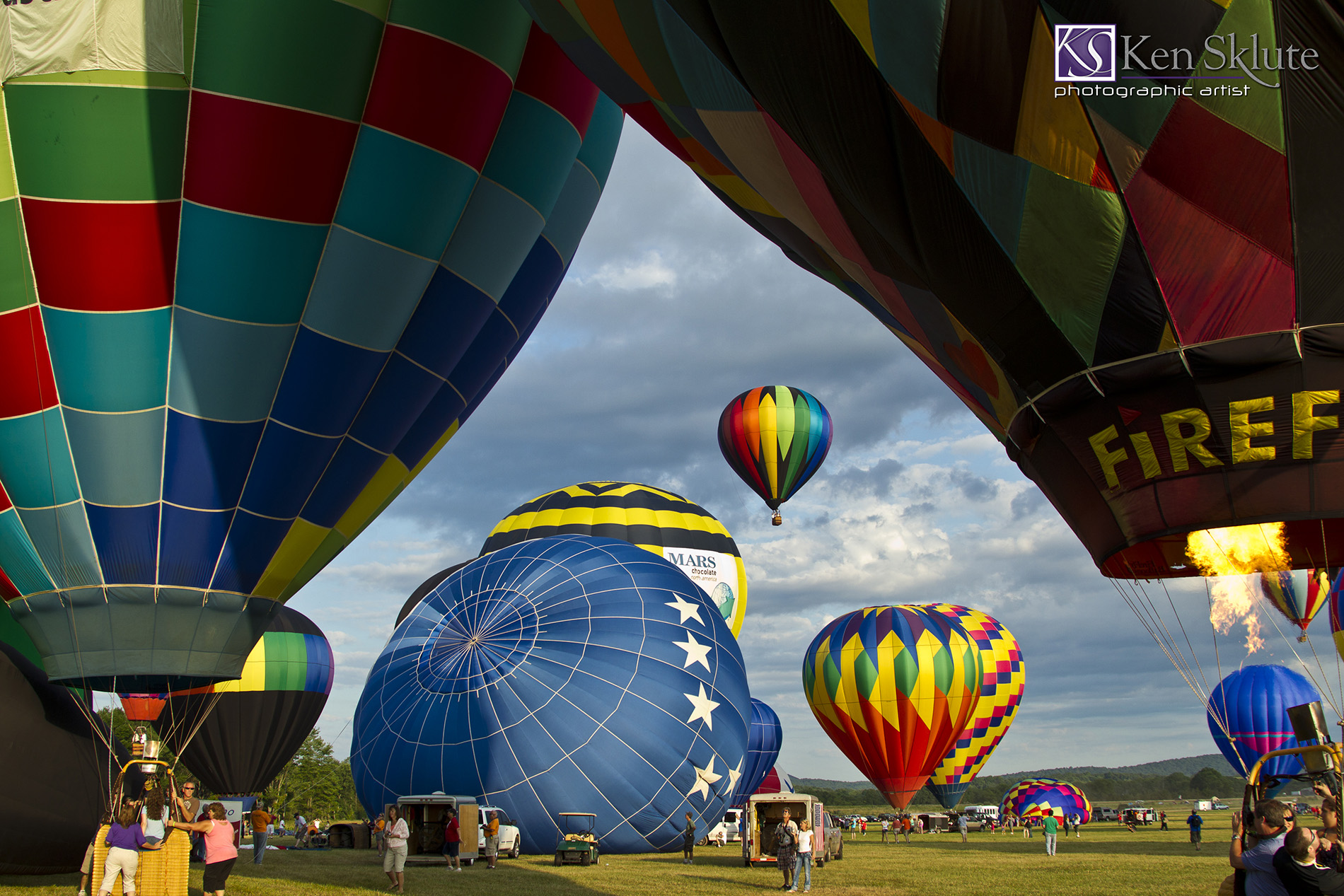 Strongly composed photographs align for mere seconds before they become a memory. In near slow motion, subjects you choose to concentrate on come together while in constant motion. Very often you are moving, the subjects are moving and the light is changing. When I see a balloon go into shadow, I search furiously to see if I can find another balloon still lit. This creates a tension and a balance, as your eye will move towards the lit balloon, relegating the darker foreground balloon to become a secondary subject.

When you compose with that arrangement in mind, your images will take on a more consistent style. Remember, there are times when you will need to depress the shutter before you can even look through the viewfinder. There are very few second chances once you see an image in front of you so be ready for almost anything as you photograph hot air balloons.

As I comb the sky searching out those microseconds when everything is in alignment, one specific thought is ever present in my mind: the rule of thirds. This Rule involves the overlapping of two horizontal lines and two vertical lines that are created when dividing your camera’s viewfinder into three equal parts, in both directions (similar to a tic-tac-toe chart). This generates powerful positions where the four points overlap. These power points are wonderful for placing your main subject. 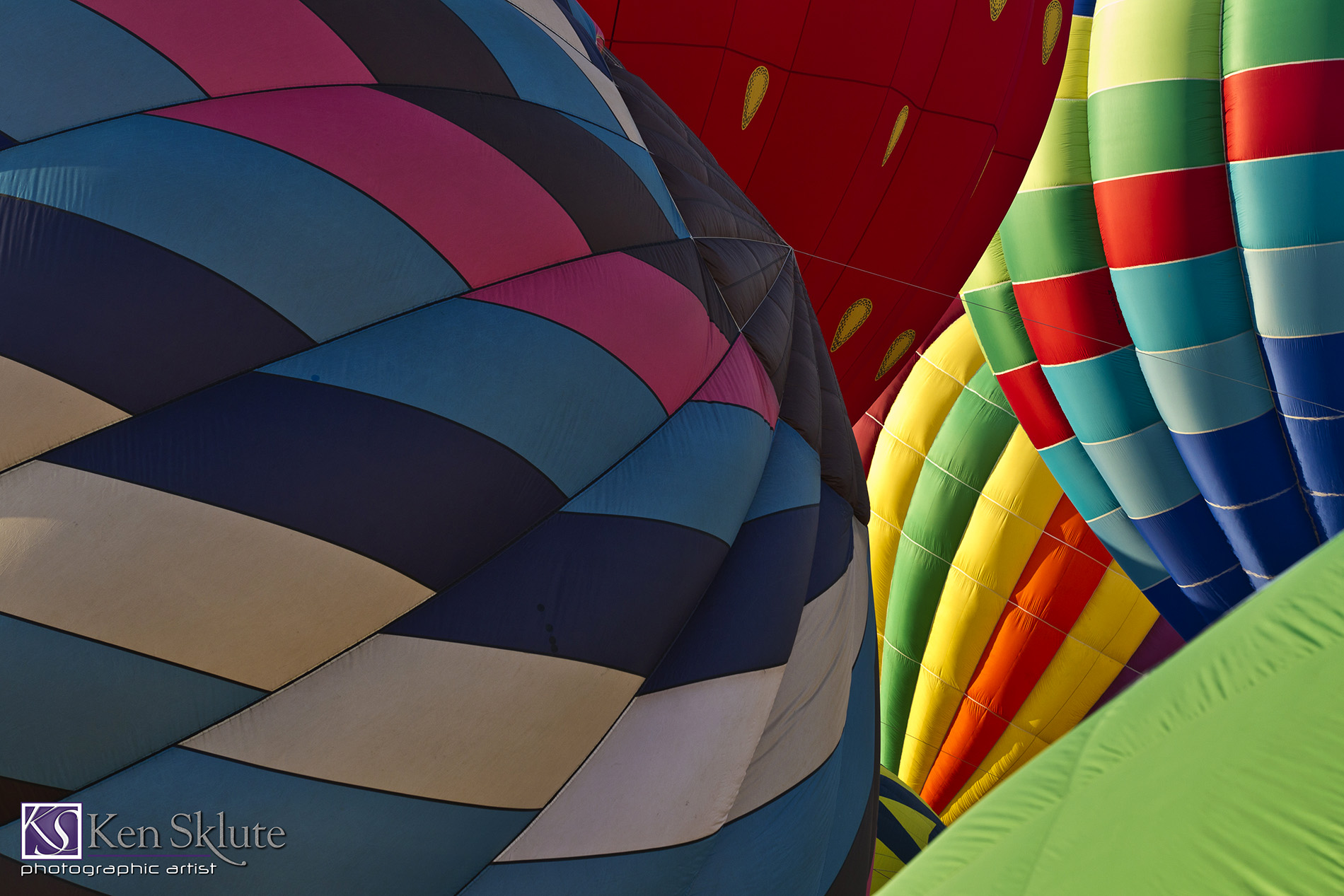 Another type of light that I try to use is the sun to backlight the gorgeous fabric as it takes to the air. We often refer to this as a “Balunar eclipse.” For that brief moment when the envelope rises into the path of the sun, it takes on a lovely dimension as the translucent fabric is now lit from behind. I usually adjust my exposure compensation from +2/3 stop to 1 full stop over the camera’s suggested light meter exposure to avoid any underexposure. Before touching any balloon equipment, even to hold the fabric when looking inside the balloon, ask for permission from the pilot or crew. Do not assume anything. Balloon fabric is delicate and needs to be handled carefully so as not to damage the aircraft.

You will see many officials dressed in black and white stripes blowing whistles to get everyone’s attention. These officials are affectionately referred to as “Zebras.” They will give the eager balloonists permission to inflate their aircraft, to go hot and stand the balloon up and when the pilot is able to launch, making sure that there are no hazards in their flight path. As this wave or row of balloons stands up, you will find unique windows of light drawing your attention to the colors, creating abstract patterns by the alignment of the various envelopes. Remember to react quickly so you are not disappointed once that window closes. Although, I have always heard that when one window closes, another one may open.

During your time on the launch field of the AIBF, you will see many pilots flying low to the ground, most often during the week as part of the competition tasks. This is a wonderful time to select compositions of the balloons at various heights and depth, all kissed by the sun gently on one side, creating the dimension that I have referred to many times. Keep your compositions uncluttered and sometimes simple, like a single pilot amongst the clouds. It is your story to tell. Tell it your way.

As the morning’s inflation comes to an end, I study balloons in the sky to find shapes in the arrangement as the envelopes rise and descend. Even though the aeronauts are moving slowly, compositions are fleeting. Work quickly but carefully as you design magnificent compositions of the sky filled with color. 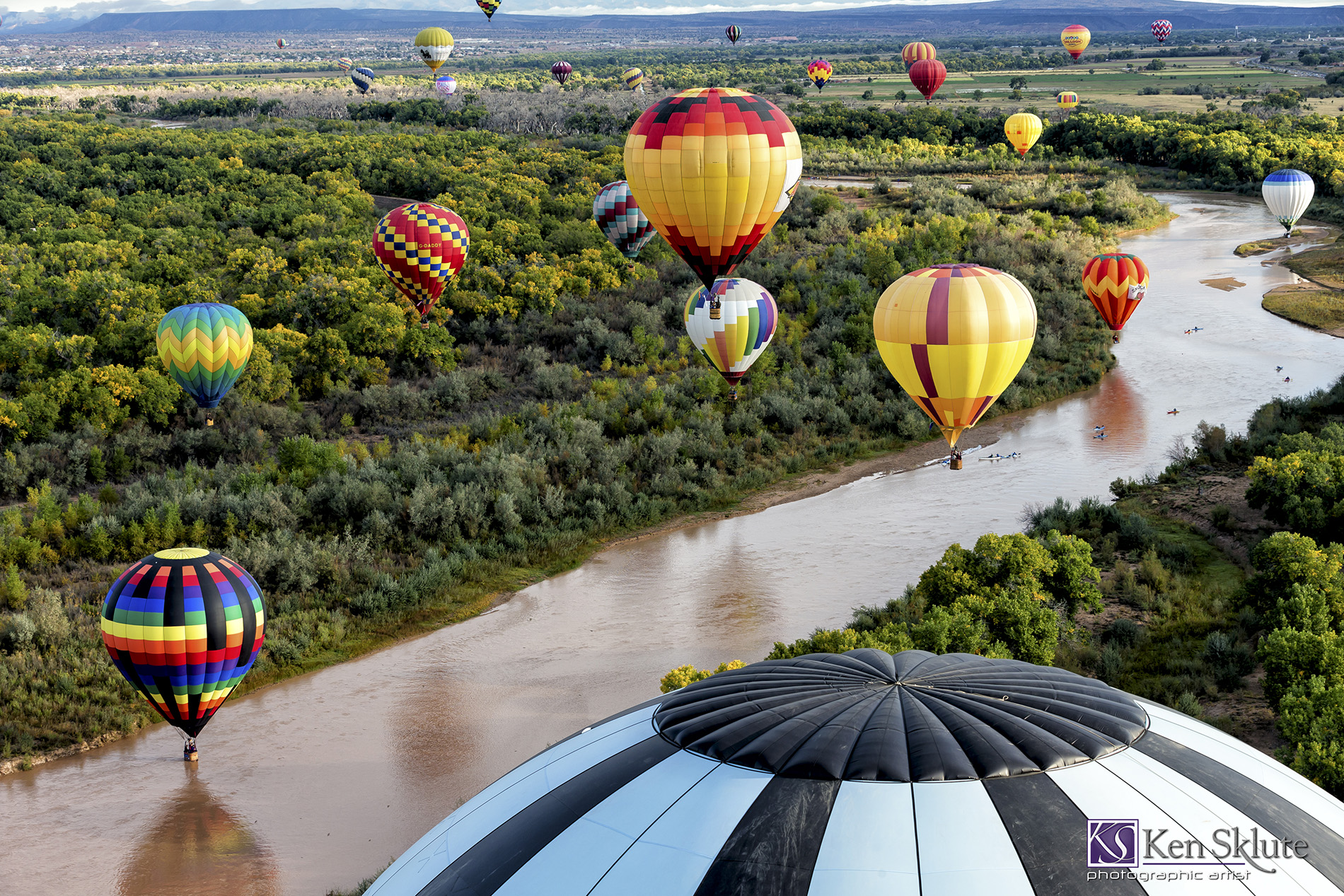