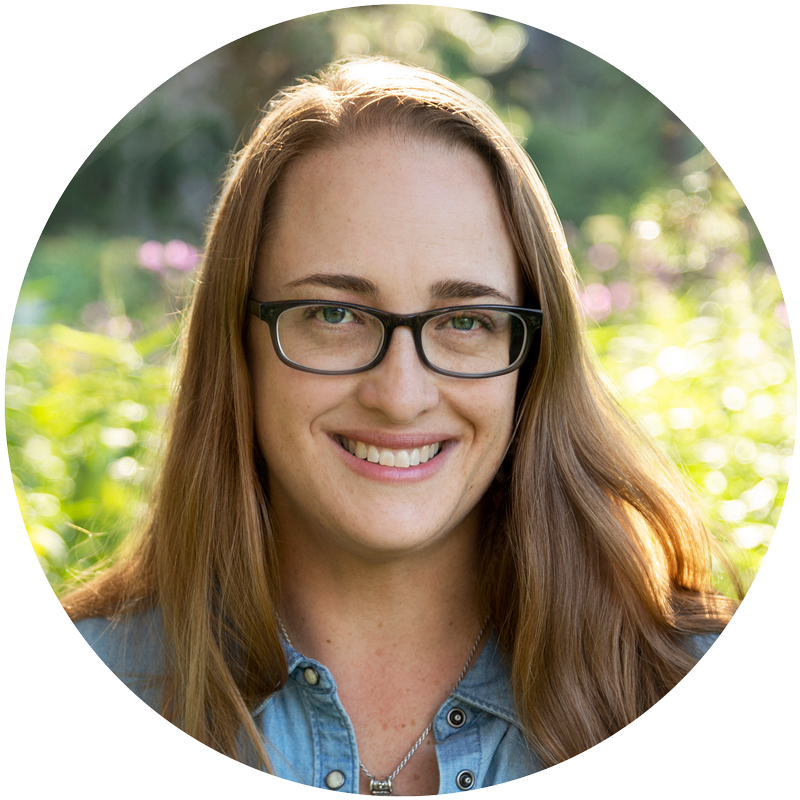 "One of the best parts of being a photographer is having an excuse to experiment and play around until we get the results that excite us. "

When to Use a Black Reflector in Portrait Photography

Many of the photographic reflectors that are available today come as a set, with multiple surfaces to choose from. In addition to white, silver and gold, reflector sets often include a black surface or black reflector. These reflectors can also be referred to as "black flags"—but when do you use them and how?

When working outdoors, I like to shoot in areas of open shade as the natural light is very even and flattering. However, the even nature of shaded light can lack dimension and sometimes appear flat. When this occurs, I like to use a black reflector to bring some dimension back to my subject’s face. While a white reflector would bounce light back onto the subject’s face, the black panel absorbs light and results in more of a shadow or molded look on the subject’s face. 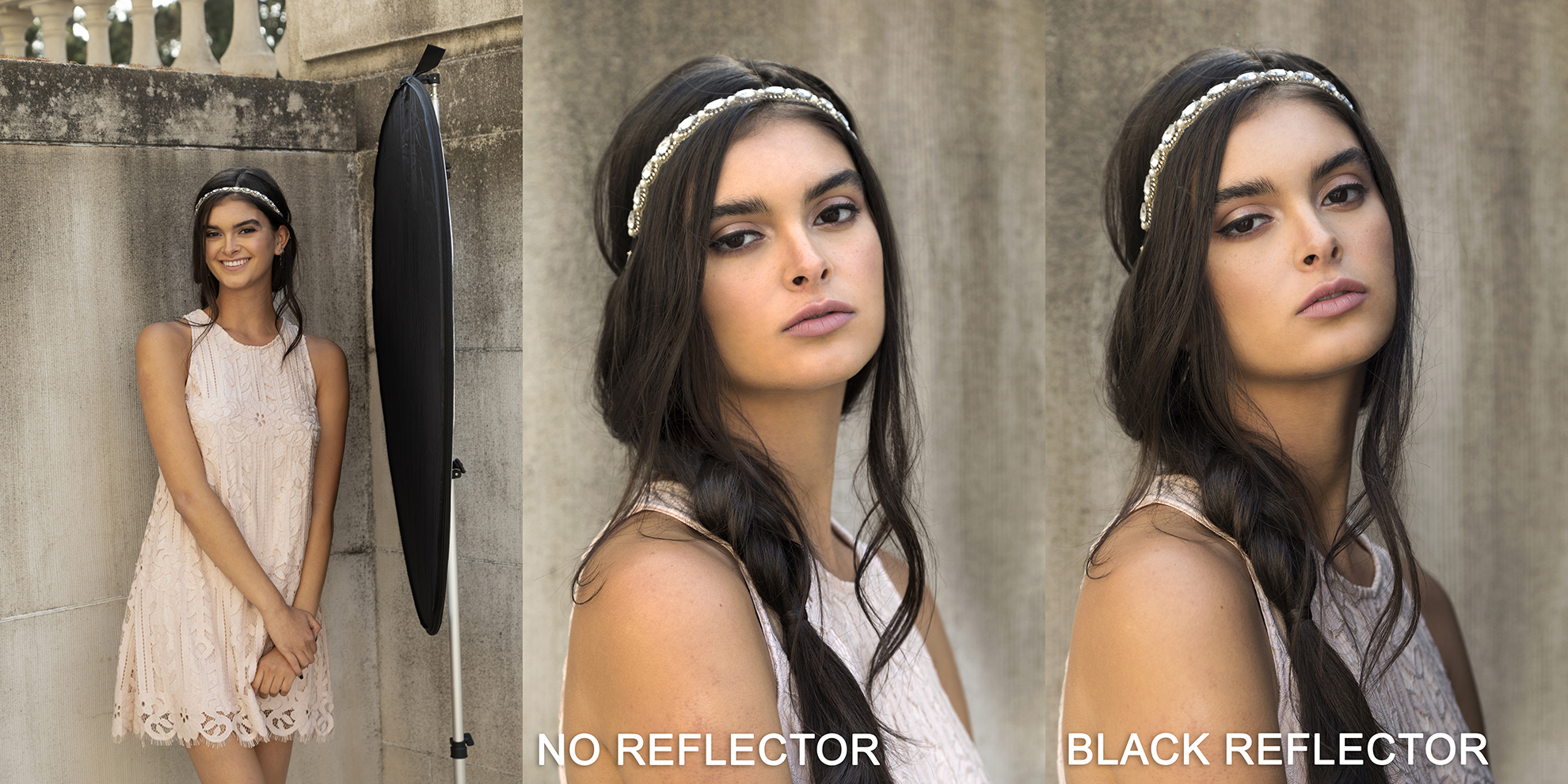 In the example above, you can see that the reflector was placed to one side of the subject and in the resulting image on the right, that side of the subject’s face has more dimension and depth. This technique works especially well on overcast days when shadows are very soft and the light looks flat as a result of being too even.

Another way I like to use a black flag or reflector is to turn it into a backdrop in natural light. When I am working in natural light and the sun is primarily behind the subject, adding a black background can have a lovely effect by removing all distracting elements in the background. As long as the sun is mainly behind the subject, light bouncing off of the ground and surrounding surfaces will light the face, and you can add a reflector to increase light if needed. 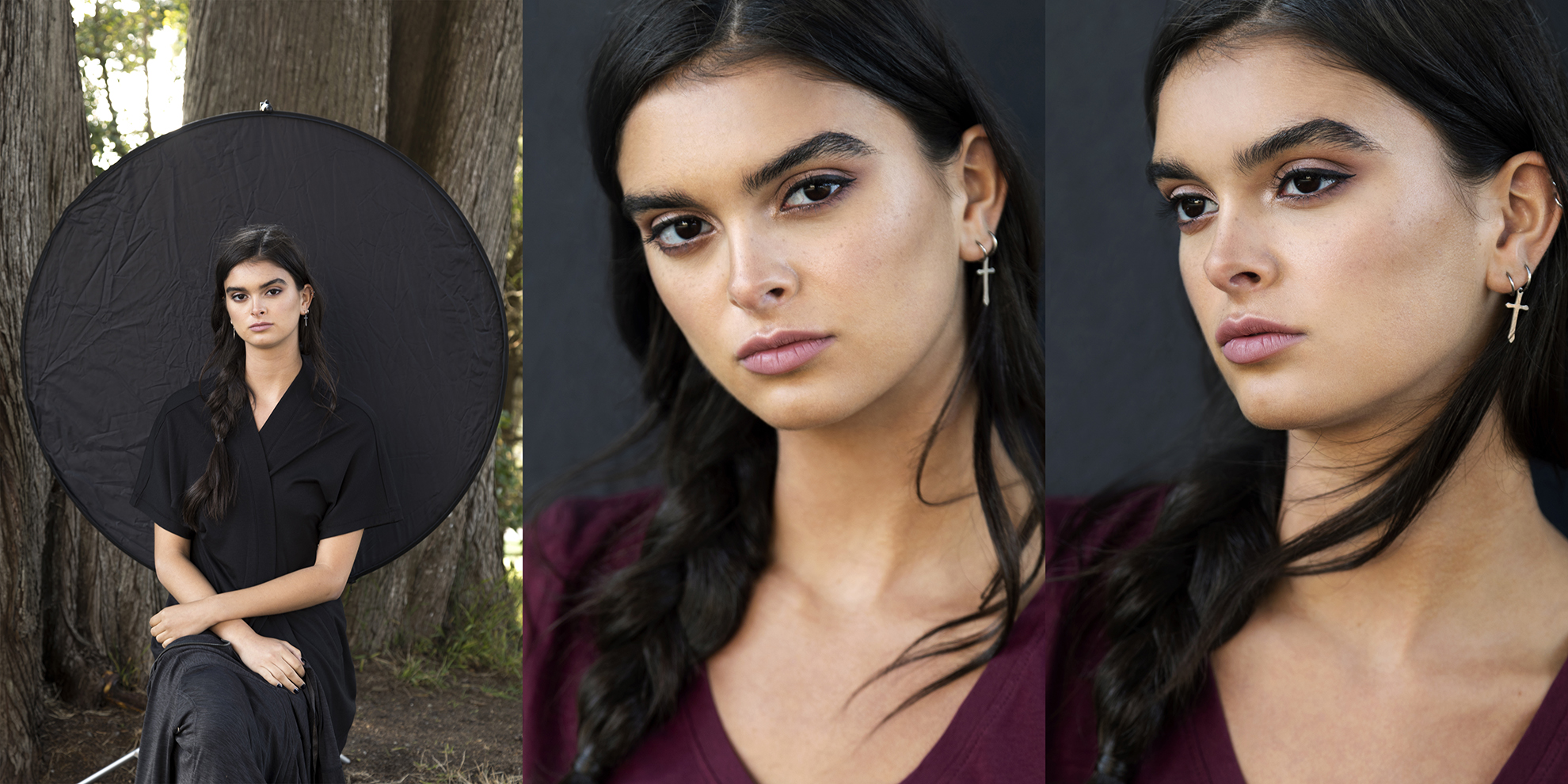 The black background will not always photograph as pure black because it will reflect a small amount of light but the dark background it provides really helps to isolate your subject and draw the focus to them. In the example above, the black reflector was just behind the subject in an area of open shade. Occasionally I will bring a larger sized black reflector on location shoots with natural light so that I can back up and capture more of the subject’s body.

In addition to keeping a black reflector handy on outdoor shoots, I also like to use black reflectors with studio lighting whenever I want shadows to look deeper and more defined. Adding a black panel on either side of my subject acts to absorb light and minimize bounce from the key light. In the example above, you can see the effect of a single light with and without black flags. The result of using black flags on either side is increased contrast overall and more defined shadows along the side of the face and under the chin and cheekbones. In this specific example, the difference is most notable below the cheekbones.

One of the best parts of being a photographer is having an excuse to experiment and play around until we get the results that excite us. Don’t worry if you don’t yet own a reflector kit, you can get the same effect by using a piece of black foam core board, which is affordable and easy to find at a craft or office supply store. So, grab a black reflector and get to work trying these techniques!