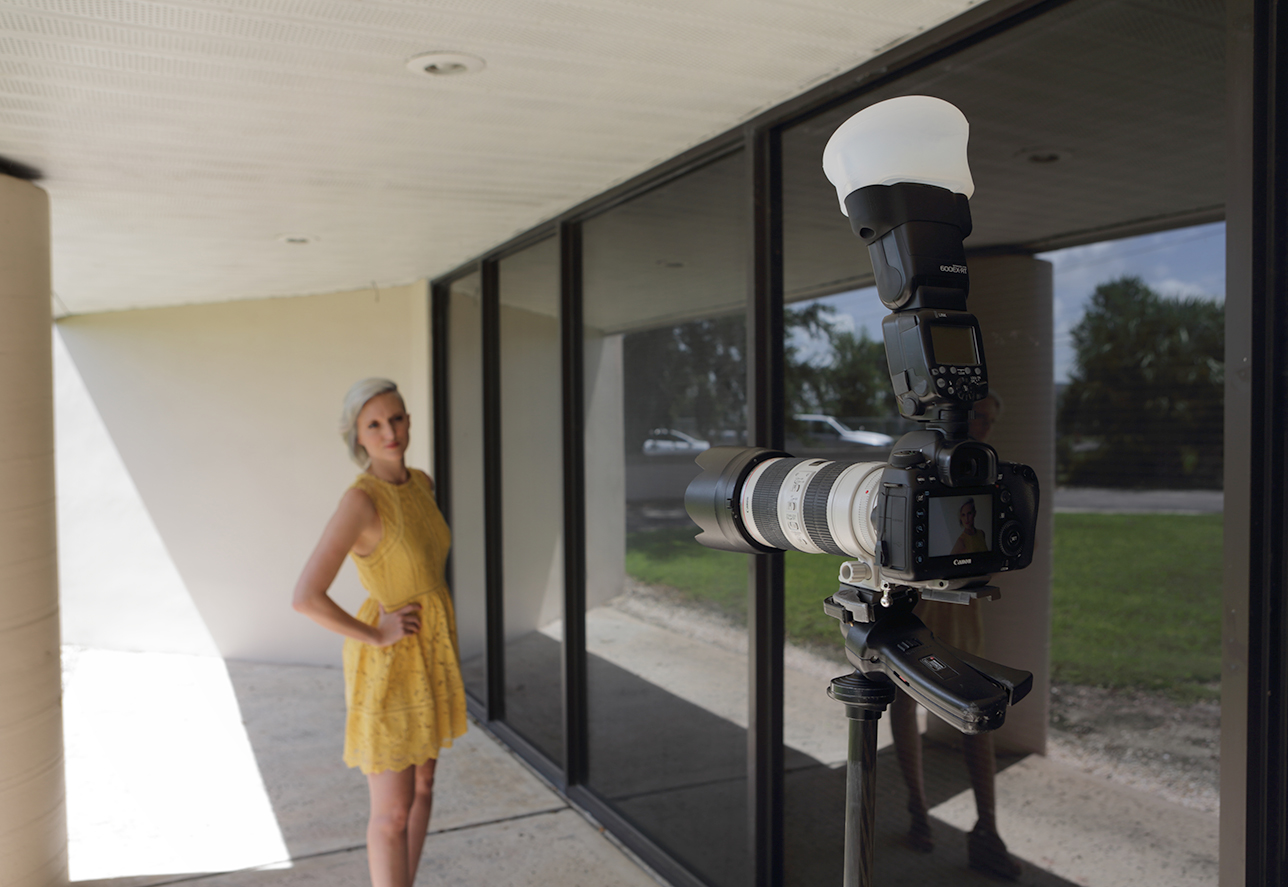 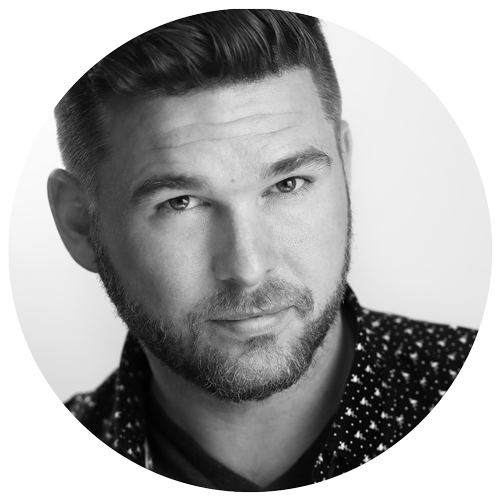 "Because of their small size, versatility, and durability, no matter what equipment I add to my arsenal, I will always have a Speedlite or two in my kit. "

Part of the reason photographers love new gear is that it inspires us and gives us a reason to create. I always equate that “new gear” feeling to getting a new pair of sneakers as a kid. I remember running flat-out through the shopping mall, swearing to my mom that the new shoes made me run faster than the old ones. The reality is that the only thing that makes you run faster is training and the only things that make you take better images are practice and experience.

So what’s the point? After all the years and all the gear, when I am walking out the door to a shoot, more often than not, it’s with my trusty Speedlites, the lights I have used more than anything else for my entire career. My business puts me in unique and varying situations on an almost daily basis and whether I am crammed into a tiny tradeshow booth shooting headshots or flying across the country to photograph real estate, I have never found a tool with a better combination of versatility and usefulness than a Speedlite. To illustrate that point, I want to share with you 5 five different ways you can use your Speedlite on-camera.

The idea of bouncing a flash isn’t new for most professional photographers. Pretty much any wedding shooter can tell you that bouncing a flash off the ceiling is going to give you better reception photos than blasting the wedding guests directly in the face, but what if there was even more to it? I have been in dozens of situations where there wasn’t time or room to set up off-camera lights. By turning the Speedlite toward a nearby surface, you can create a portrait in a pinch that’s light-years ahead of using available light or direct flash. Here are a couple of things to consider, though, when you do. Note the color of the surface you intend to bounce your flash off of. The color of the light coming from your flash will take on the tint of the surface, so look for neutral surfaces when possible like white, light grey, and cream colors. By the same token, the brighter the surface, the better the bounce. Trying to bounce off a dark or black wall can leave you with very little light reaching your subject, so keep that in mind. If the surface is more than a few feet from you, use the zoom feature in your Speedlite to narrow the beam of light and get a more effective bounce. 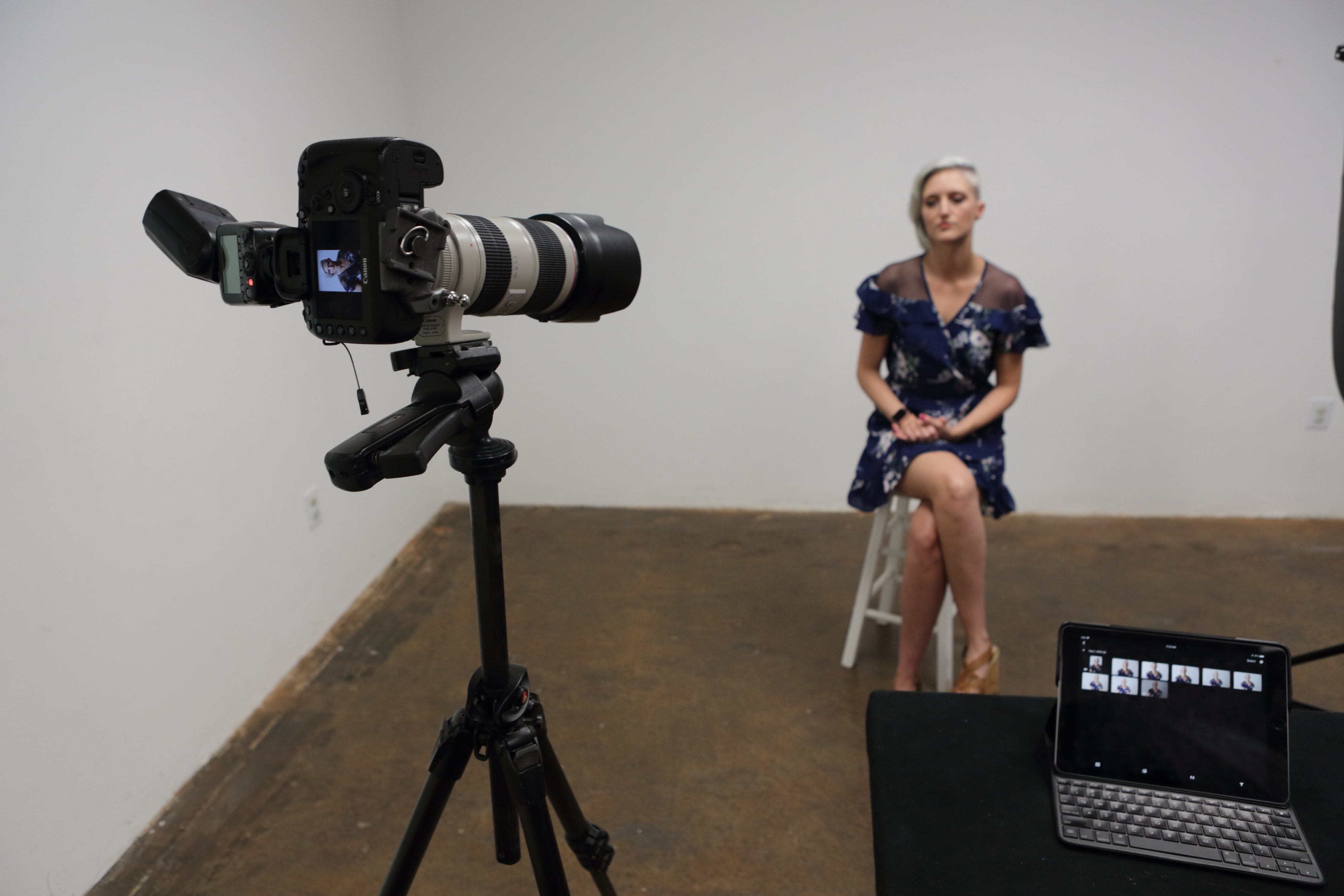 Showing the distance from the camera and flash to the wall (about 4 feet). Also I used a tablet and the Canon Camera Connect app to tether wirelessly and preview my images on a larger screen 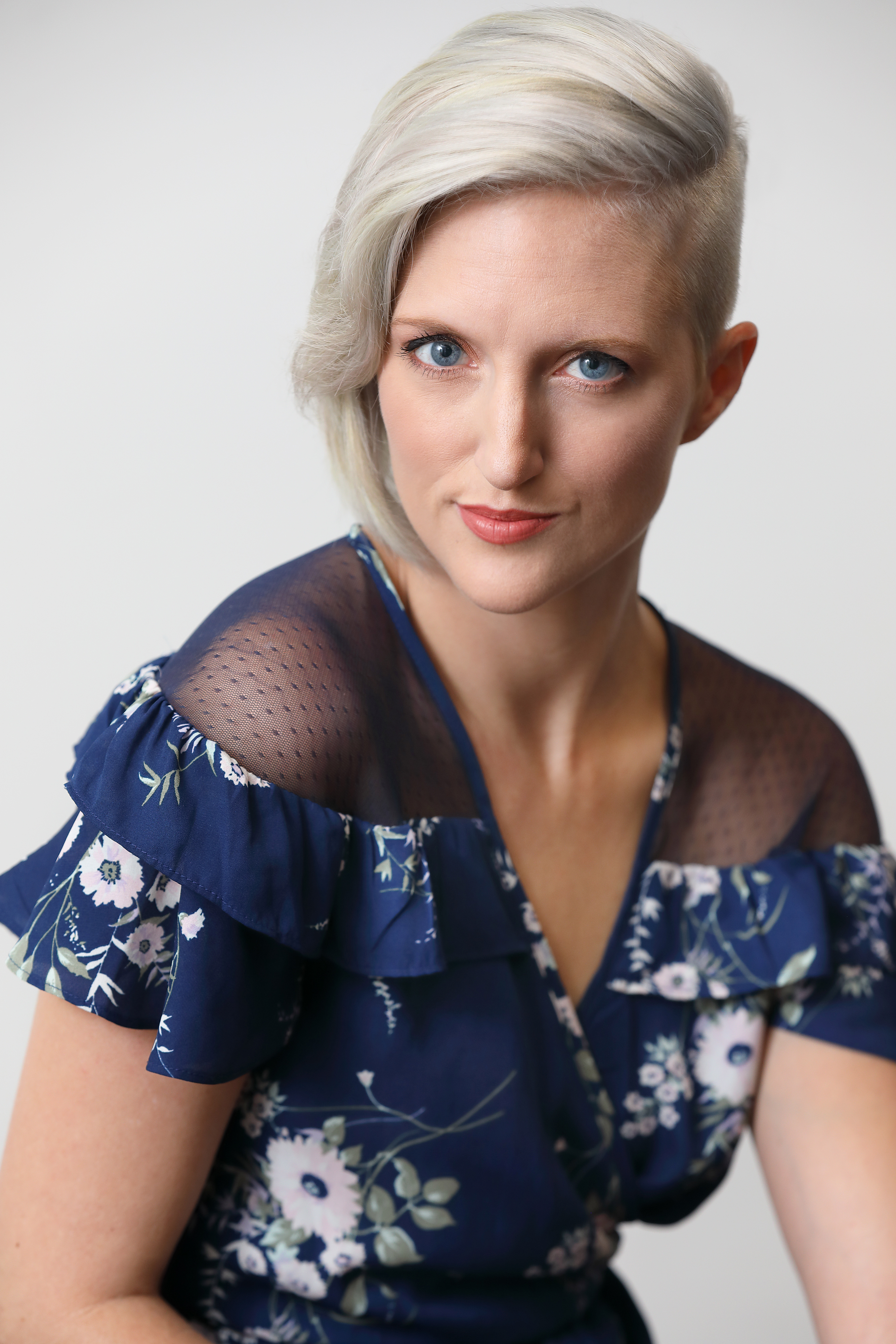 Using a Canon 600EX-RT Speedlite bounced off the wall to camera left, I was able to diffuse the light and create a directional light perfect for a simple portrait.

I have written angry manifestos about my hatred of 3rd party radio flash triggers. Before I switched to the Canon 600EX-RT units with built-in RF triggers, I found the large majority of radio triggers to be, at best, mildly convenient and, at worst, an infuriating failure. You would have a hard time finding a pro that hasn’t had a bad experience with one trigger or another. For this very reason, even when I am using my larger studio strobes, I always keep a Speedlite handy. Most studio strobes include a handy, built-in gadget called an optical receiver. This is a pretty old but reliable piece of tech that can really save your butt in a pinch. An optical receiver, as it relates to a studio strobe, functions as a backup trigger. If the optical receiver is active, a strobe will fire when that sensor receives light from or “sees” another strobe fire. Essentially, you can use a Speedlite on-camera to trigger your studio strobes using the optical receiver built into them. Here are a couple of things you might need to know. Optical receivers need a decent amount of light to trigger host strobe. If you are in a very large room and the optical receiver on the strobe (usually located on the back in the form of a small, partially opaque dot) is too far away to receive the light from another strobe, it may not fire. Make sure the optical receiver has a good chance of getting the light from your Speedlite into its sensor. In addition, to save the batteries in your Speedlite and to keep it from changing the lighting your subject is receiving from the other strobes, make sure to power down the Speedlite and don’t point it at your subject. I have fallen back on this technique more times that I care to admit, but it’s a great trick to have up your sleeve when running to the camera store for a new trigger isn’t an option.

With the capabilities of modern cameras to create incredible images in low light, shooting with available light, even in dark situations, has become more and more commonplace. The photographers who love to lurk in the darkness and open their f/1.2 lenses often run into a particular issue: the darker the situation, the harder it is for cameras to focus. Even though a camera and lens can gather the light needed for a great exposure, focusing can become problematic in the dark. Today’s cameras are way better than they used to be, but if you are shooting a wedding reception, party, or wildlife in the dark, quick and accurate focusing is critical to nailing the shot. When shooting in dark situations, even using available light, you will see my old pal the Speedlite sitting on top of my camera so that I can take advantage of one magical trait, AF illumination. That pretty red part on the front of your Speedlite is for more than just flair, it can help you focus in the dark. Most modern Speedlites have a built-in LED light on the front of the flash that can be used to help your camera focus faster in low light. It throws out a small amount of red light that’s just enough to help the camera focus. Depending on your model of camera, there is even a setting to disable the flash from firing while still using the AF assist to help you focus.

When natural light is good, it’s the best light there is. Most of the time, though, photographers know that natural light can use a little help to make better images. When shooting in a situation with great direction of light that needs a little more illumination, a Speedlite can be a useful tool to lighten up the shadows without overpowering the natural direction and quality of light. In cases like these I will often use a small modifier or the built-in bounce card while pointing the flash straight up. When adjusted to the right power setting, you can bounce just the right amount of light in to brighten up the shadows. Keep in mind that this will also make the illuminated parts of your subject brighter as well, so you may need to change your exposure slightly to compensate. 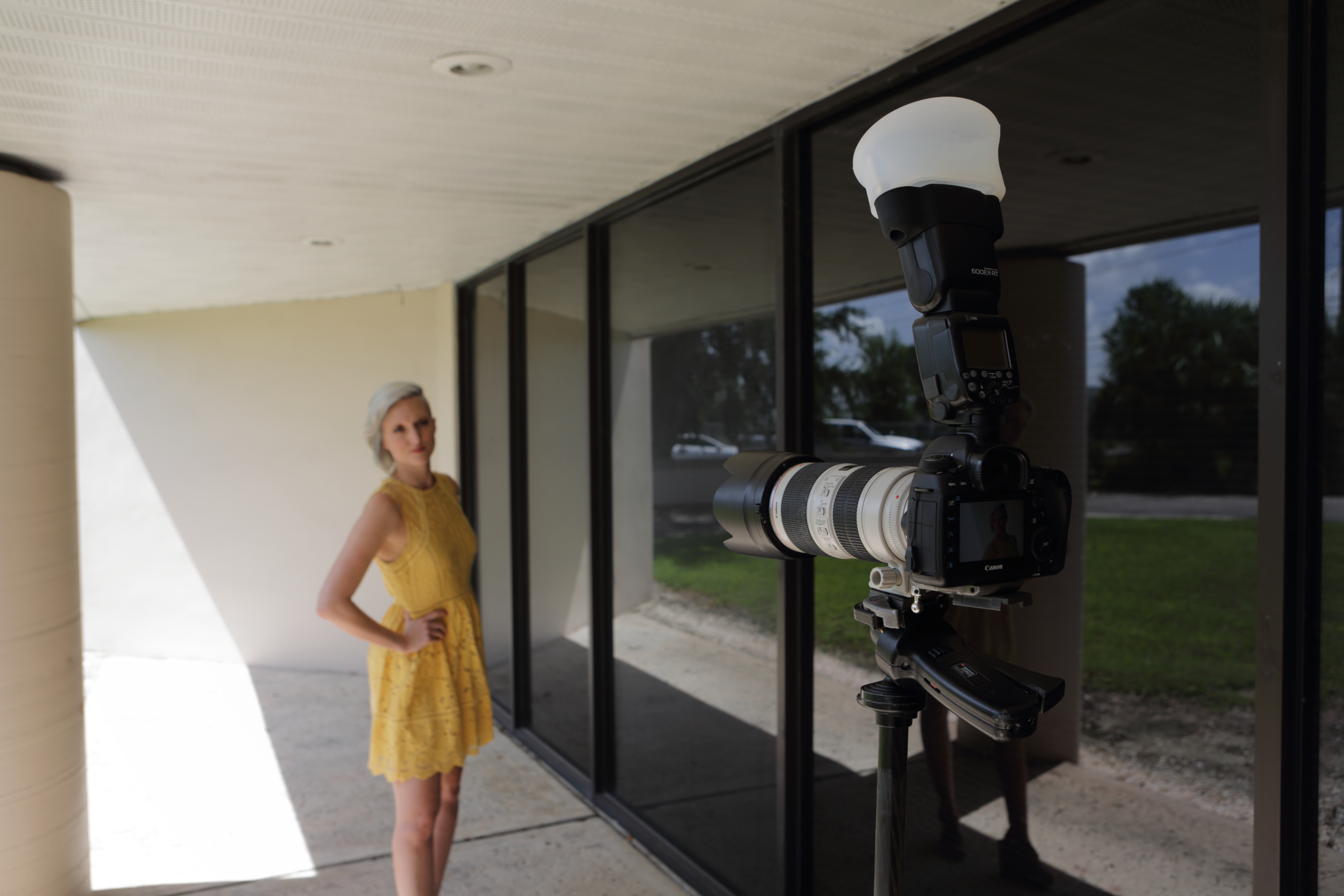 Placing a subject under an overhang helps take advantage of more diffused, directional light while shooting outside on location. Adding a small amount of fill light from an on-camera flash can help make the light more flattering without overwhelming the natural direction of light.

Before: In this situation on a bright, sunny day, finding available light that looks just right can be tricky. Although there is plenty of illumination in the scene and direction of light, the face of the subject could use some more light.

After: With a flash on-camera and a small diffuser, I was able to add some fill light that brought much better illumination to the face of the subject, without overpowering the natural direction of light.

An on-camera Speedlite has a couple of unique abilities. You may already know that you can use High Speed Sync to shoot moving subjects and freeze the action, but did you know there is a second sync mode? That’s right, and it can help create some pretty unique images. 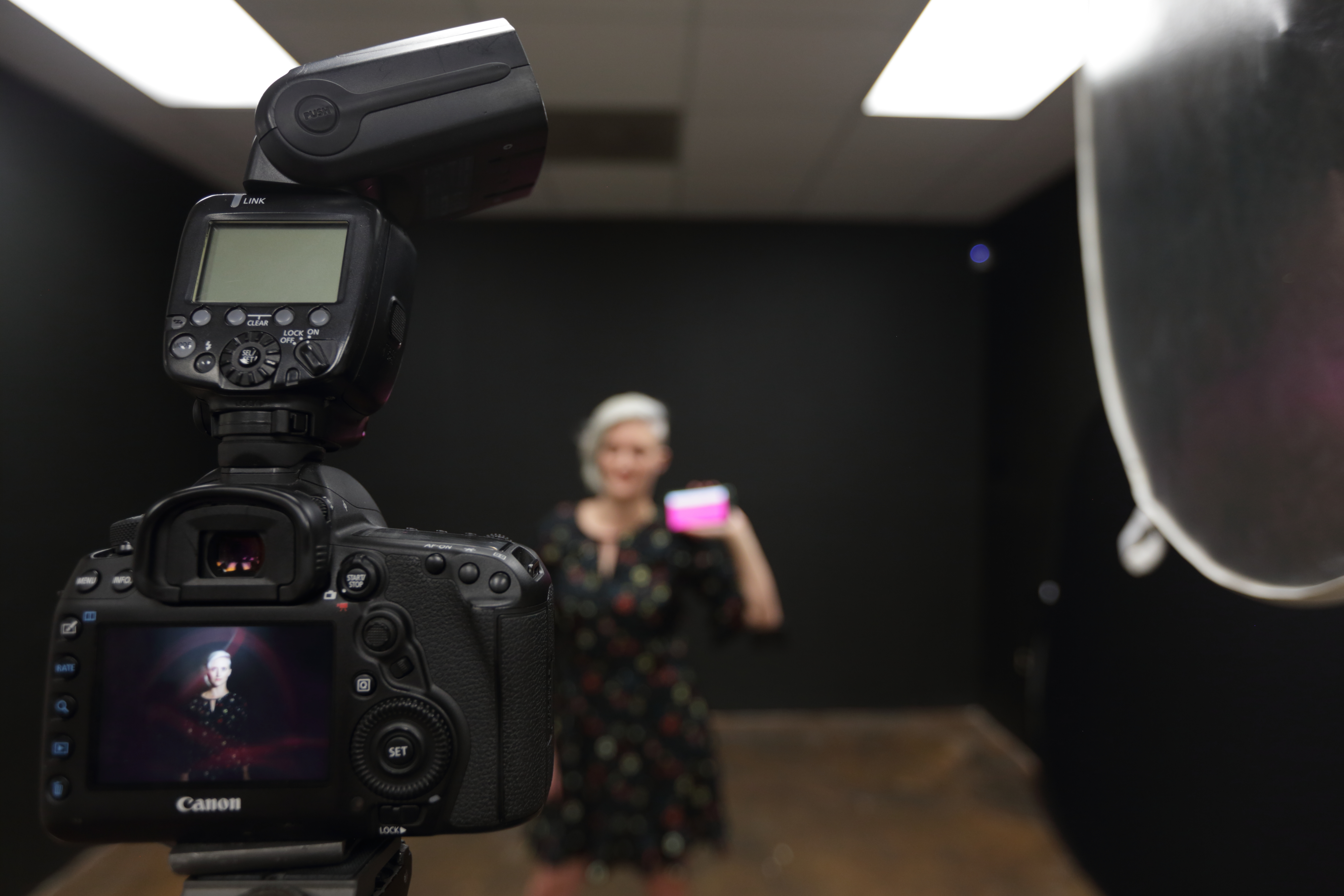 Using a phone displaying a magenta screen, the subject was able to move through the frame and make trace lines with the light. Near the end of the exposure, she moved on to the pre-determined mark and held still to be illuminated by the flash. 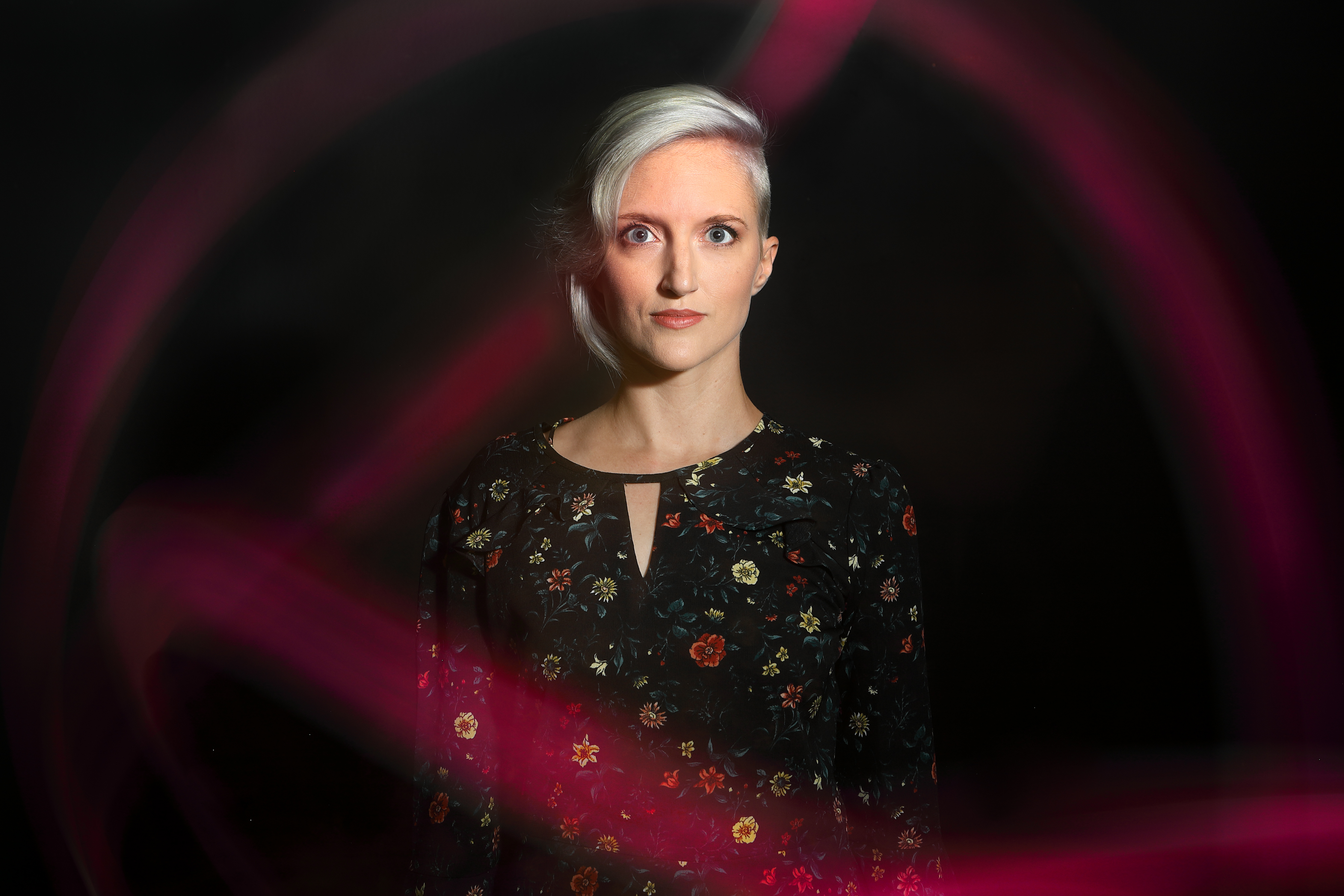 Taking advantage of rear curtain sync can give you the ability to use techniques like long exposures while still getting your main subject sharp and well illuminated.

Modern DSLR cameras use a type of shutter called a curtain shutter. There are two curtains, one that opens at the beginning of the exposure and one that closes at the end, that’s the “rear curtain” also known as “second curtain”. By default a flash fires at the beginning of an exposure, but with rear curtain sync, you can set your Speedlite to fire at the end of the exposure instead. Why would you want to? Besides all of the really smart and practical reasons, you can create some unique images. If you are trying to create an image with motion during longer exposures, and the flash fires at the beginning of the exposure, the motion in the image will be “on top” of what the flash illuminated in the frame. If the flash fires at the end of a long exposure, all of the motion will be “beneath” what the flash illuminated. You can use this technique in a variety of ways for moving subjects like dancing, live performances, and even creating some interesting portraits. Using an off camera shoe cord can even give you the benefit of having the Speedlite attached to the camera body while allowing you to change the direction of light for more interesting images.

The possibilities that Speedlites bring to the table are vast as evidenced by their popularity. Because of their small size, versatility, and durability, no matter what equipment I add to my arsenal, I will always have a Speedlite or two in my kit.