If you have downloaded a PDF manual and require Adobe Reader, please download the latest version

CANON U.S.A.,Inc. MAKES NO GUARANTEES OF ANY KIND WITH REGARD TO ANY PROGRAMS, FILES, DRIVERS OR ANY OTHER MATERIALS CONTAINED ON OR DOWNLOADED FROM THIS, OR ANY OTHER, CANON SOFTWARE SITE. ALL SUCH PROGRAMS, FILES, DRIVERS AND OTHER MATERIALS ARE SUPPLIED "AS IS." CANON DISCLAIMS ALL WARRANTIES, EXPRESS OR IMPLIED, INCLUDING, WITHOUT LIMITATION, IMPLIED WARRANTIES OF MERCHANTABILITY, FITNESS FOR A PARTICULAR PURPOSE AND NON-INFRINGEMENT.
CANON U.S.A.,Inc. SHALL NOT BE HELD LIABLE FOR ERRORS CONTAINED HEREIN, OR FOR LOST PROFITS, LOST OPPORTUNITIES, CONSEQUENTIAL OR INCIDENTAL DAMAGES INCURRED AS A RESULT OF ACTING ON INFORMATION, OR THE OPERATION OF ANY SOFTWARE, INCLUDED IN THIS SOFTWARE SITE.

I have read and understand the information above, and wish to download the designated software.
PRODUCT INFORMATION FIND SUPPLIES & ACCESSORIES SHOP FOR INK & TONER

Get Product Support
Register Your Product

Choose from our list of Electronic Range Calculators to find the dimensions you need.

The portable CJ15ex8.5B is an important 4K UHD zoom lens that is part of our 2/3-inch UHDgc series. Its compact size and low weight support the high mobility shooting often entailed in sports and many other genres of television field production. For those seeking a new lens for contemporary HDTV production - while also anticipating a future shift to 4K production - this lens enhances current HDTV optical imaging performance while potentially future-proofing for the longer term.

An advanced digital drive unit deploying 16-bit encoders is fully compatible with the zoom, focus and iris controllers used with established broadcast 2/3-inch HDTV cameras. Three 20-pin connectors on the drive unit interface with these controllers (such as the ZSD-300D and FPD-400D) while also providing a 16-bit interface to virtual systems. The unit empowers a variety of operational capabilities that are set up using the on-board display. 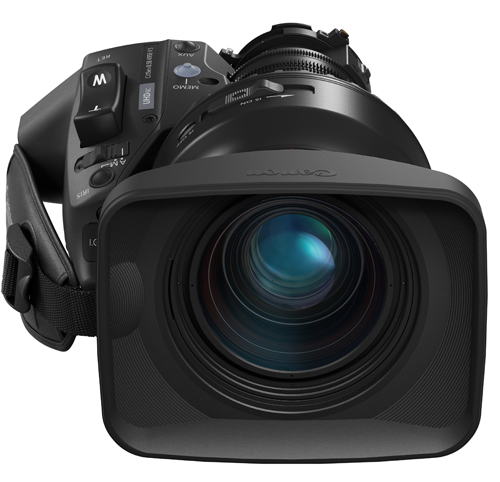 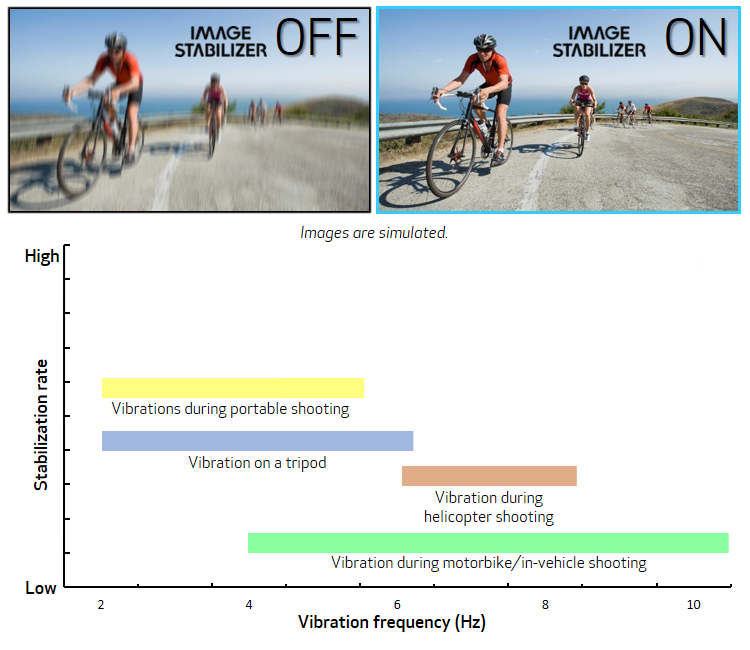 Vari-Angle Prism Technology
The Canon developed Vari-Angle Prism (VAP) technology is an innovative image stabilization system based upon a flexible prism intercepting the light rays entering the lens proper – known as the Vari-Angle Prism Optical stabilization (VAP-IS). This system is ideally suited to removing image blur due to vibration frequencies encountered in a variety of shooting situations. This is especially important for 4K lens-camera system where the far higher resolution makes such image blur more visible. 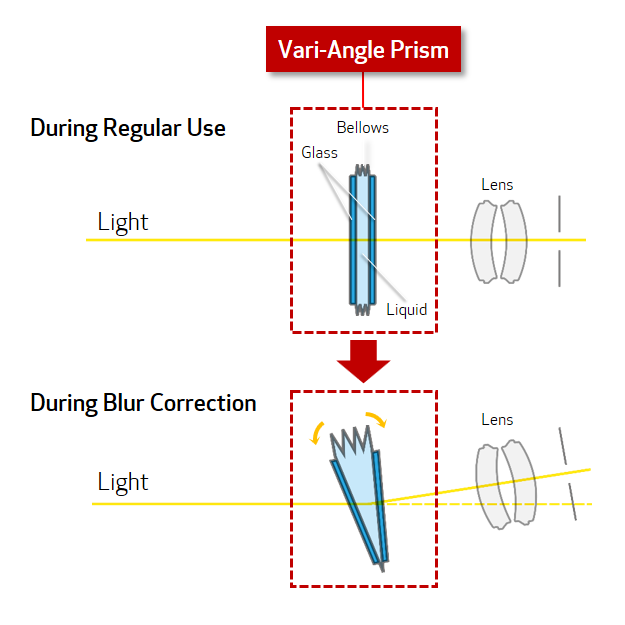 Activation and Shooting Modes
The Image Stabilization feature can be activated directly on the lens. 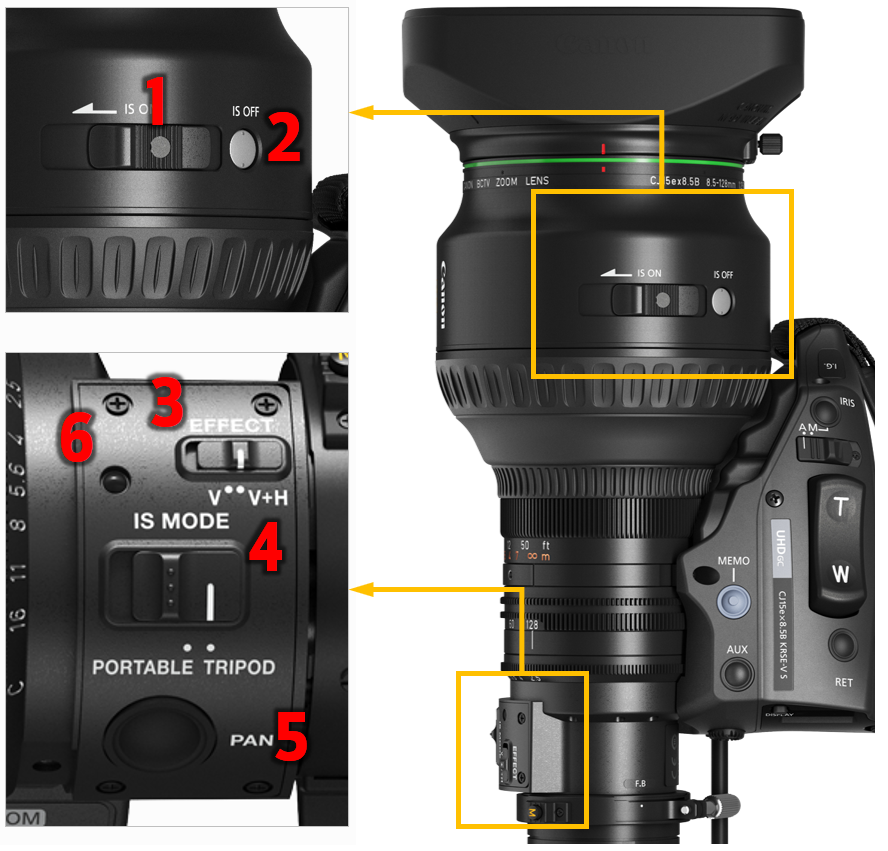 When using the image stabilization function, the IS lever is set to ON, and a mechanical lock is released.

1 -  IS lever: Image Stabilization ON/OFF Lever
The stabilization function is turned on by moving the IS lever in the direction of the arrow until it locks.

2  - IS OFF Button: Turns Image Stabilization OFF
After using the lens, be sure to press the OFF button to re-engage the mechanical lock.

Greater stabilization effects can be achieved by using two modes according to shooting situation and vibration. The switch is located on the relay part.

5 - Panning Switch
If you push this switch during camerawork with stabilization on, the stabilization is temporarily turned off
to prevent any shaking or fluttering effect on the screen.

6 - IS Indicator Light LED
Illuminates when stabilization is working

Compact and Lightweight
Weighing only 4.48 lbs. and measuring 6.7” (W) x 4.6” (H) x 9.4” (L), the portable CJ15ex8.5B 4K UHD lens is similar in size to our 2/3" HD lenses, while delivering 4K performance and offering the mobility demanded in the reporting and documentary fields. The lens features the optimum construction and high durability of a conventional HD lens, while offering the same shooting style as that of existing 2/3" HD lenses.

The center of gravity is close to the mount, lessening strain on the hands and elbows of the camera operator. The ergonomic form factor creates a user-friendly design, including an ergonomic grip design for a comfortable feel during operation, helping to reduce fatigue and make it easy to move the camera about. The lens is sure to satisfy with its high-level combination of excellent specifications, enhanced optical performance, and outstanding usability.

HD Demand Compatibility
This feature allows for compatibility with a broadcast-use HD demand. It enables the use of the zoom and focus electrical drive system accessories (such as the ZSD-300D and FPD-400D) which are currently used by HD equipment.

Improved Startup and Mobility
The drive unit of the CJ15ex8.5B 4K UHD lens can output accurate lens position data from the moment the power is turned on and does not require initialization, contributing to the quick start when shooting. This is possible thanks to the drive unit's 16-bit absolute value encoder. Eliminating initialization of the encoder at power-on simplifies calibration when composing virtual and live-action images, and helps to create more accurate composites.

Aberration Correction and Virtual Functions Enabled without Lens Initialization
Aberration correction functions increasingly been employed on 2/3" HDTV/UHDTV cameras for broadcast use. The associated data files are immediately transferred to the camera, which implements digital correction for the lens aberrations. The lens also delivers digital positional data for external virtual systems. 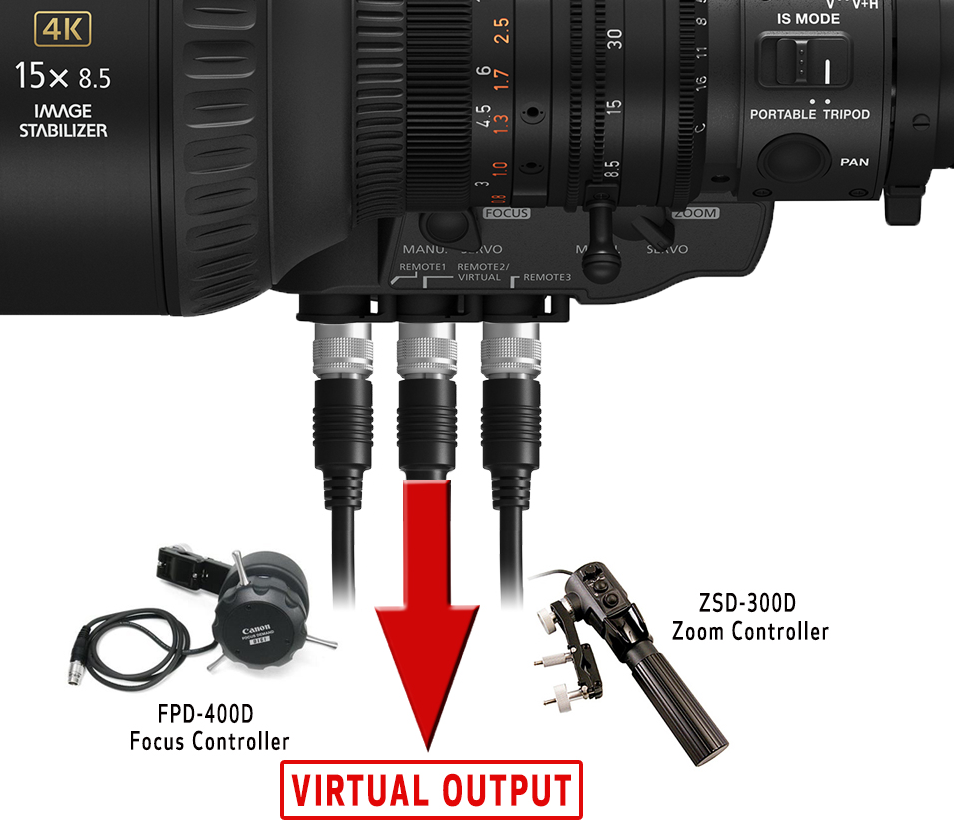 On-Board Display
Various digital features can be set, adjusted, and operated from the display on the drive unit.

Digital Functions
The Canon drive unit integrates a variety of operations, stored digitally, that can be manipulated using the display.

Shuttle Shot
By memorizing any two focal lengths, the Canon drive unit can automatically "shuttle" between two points, moving in either direction. As an example, this function is effective for shots in which an operator wants to start from a wide angle and then zoom in rapidly on to an object.

Frame Preset
An angle of view can be preset in either of two memories and the lens will zoom at the highest speed, or in a preset zoom speed, to the pre-set position with the push of a simple button. As an example, this function can be effective for situations such as interview programs, where it is necessary to switch between bust shot and wide shot.

Speed Preset
A specific zoom speed can be preset in memory making it possible to repeat the zoom speed as often as you like with the push of a simple button. Using a preset speed when zooming in and zooming out contributes to help create stable images, particularly with slow zooms.

MOD From Front of Lens

Augmented Creative Control: Innovations in Focus Demand and Zoom Demand Controllers for 4K UHD Long Zoom Field Lenses
Today, large format lens-camera systems have been adopted in many broadcast television productions and producers, directors, and camera operators have now become both attached to, and skilled in, the cinematic imagery and practices supported by these systems. In particular, the “rack focus” is much used in movie and episodic television dramas. This entails a subtle change in depth of field that reveals some new detail (can be an item or another human subject) in a scene – by careful manual operation of the lens focus control. Operational implementation involves changing the focus of the lens during a continuous shot – and this can be small or large changes of focus. If the focus is shallow, then the technique becomes more noticeable. It does demand precision control over focus accuracy.

Very wide rotation angles – typically 270 degrees or greater (from MOD to Infinity focus extremes) – has long been established in the cine lenses (both primes and zooms) used in the motion picture film world.
DOWNLOAD
Role of the 2/3-inch Image Format in 4K UHD Production
This paper is intended to provide a background to the emergence of 2/3-inch lens-camera systems for 4K UHD production and the optical performance expectations of associated 4K lenses. The paper will review Canon’s involvement in the development of those lenses and will describe our initial 4K UHD lens family and the associated design strategies to achieve this impressive level of optical performance. The paper will explain the unprecedented strategy of introducing two categories within this new 4K UHD lens family – namely, 4K and 4K PREMIUM. The distinct performance difference between the two reflects Canon’s recognition that different 4K program genres will require different levels of overall cost / performance.
DOWNLOAD
Lens Strategies for the era of 4K UHD Digital Motion Imaging
It was probably inevitable that broadcasters would begin to explore the possibilities of 4K UHD for the globally popular world of outside broadcast sports coverage; and indeed, recent years have seen a great deal of related experimental projects. The 4K UHD lens issue soon surfaced as the limitations of presently available Super 35mm zoom lenses quickly became apparent.
DOWNLOAD

This is to make Misc appear on the page when needed.

† Prices and specifications subject to change without notice. Actual prices are determined by individual dealers and may vary.