If you have downloaded a PDF manual and require Adobe Reader, please download the latest version

CANON U.S.A.,Inc. MAKES NO GUARANTEES OF ANY KIND WITH REGARD TO ANY PROGRAMS, FILES, DRIVERS OR ANY OTHER MATERIALS CONTAINED ON OR DOWNLOADED FROM THIS, OR ANY OTHER, CANON SOFTWARE SITE. ALL SUCH PROGRAMS, FILES, DRIVERS AND OTHER MATERIALS ARE SUPPLIED "AS IS." CANON DISCLAIMS ALL WARRANTIES, EXPRESS OR IMPLIED, INCLUDING, WITHOUT LIMITATION, IMPLIED WARRANTIES OF MERCHANTABILITY, FITNESS FOR A PARTICULAR PURPOSE AND NON-INFRINGEMENT.
CANON U.S.A.,Inc. SHALL NOT BE HELD LIABLE FOR ERRORS CONTAINED HEREIN, OR FOR LOST PROFITS, LOST OPPORTUNITIES, CONSEQUENTIAL OR INCIDENTAL DAMAGES INCURRED AS A RESULT OF ACTING ON INFORMATION, OR THE OPERATION OF ANY SOFTWARE, INCLUDED IN THIS SOFTWARE SITE.

I have read and understand the information above, and wish to download the designated software.
PRODUCT INFORMATION FIND SUPPLIES & ACCESSORIES SHOP FOR INK & TONER

Get Product Support
Register Your Product

Canon's first interactive projector, the LV-WX300USTi, is an ultra short throw model with interactive technology that allows users to create an immersive, engaging, and collaborative experience, adding a new dimension to educational and corporate presentations, teaching and training programs. The interactive functionality of the LV-WX300USTi allows for up to four interactive pens* to simultaneously write text and diagrams on the projected screen. For added flexibility, an optional Finger Touch Module can be purchased and installed to allow for writing using other objects (fingers, pointers, etc.) without the need of an interactive pen. The LV-WX300USTi projector is also bundled with additional software that provides functions for automated calibration, creating enhanced original materials, and for easily capturing and sharing screens (stills or video) to help reinforce and enhance the learning process.

The Canon LV-WX300USTi is a compact ultra short throw projector with a 0.35:1 throw ratio, DLP BrilliantColor™ technology, 3000 Lumens, WXGA (1280 x 800) resolution, and a contrast ratio up to 7500:1, allowing it to display large, bright high resolution images and HD video from very short distances (can display 80-inch diagonal images from less than 1-foot from the projector).

The LV-WX300USTi offers flexible connectivity including two HDMI inputs for displaying high-quality digital images and high definition 1080p signals from various sources such as Blu-Ray players. Other inputs include an RJ-45 port which makes it possible to control and monitor the projector over a network, including industry standard Crestron, AMX and Extron devices. Dual 10W built-in speakers make it easy to add sound without additional equipment; while a mic input adds another convenience to the A/V experience. The LV-WX300USTi is also capable of projecting 3D content via the DLP-Link System for users equipped with DLP Link 3D glasses and 3D Blu-ray player.

This model also offers flexible image quality adjustment features including a selection of image modes to choose from to best optimize the content being displayed, and a Screen Color Correction feature which can be used to better match colors of content by compensating for the color of the projected surface.

The compact size and weight (approximately 11 lbs.) of the LV-WX300USTi allow for greater installation flexibility, and for more convenience an optional Wall Mount is also available (sold separately). Maintenance is also simplified by a filter-free design, and a lamp that has an extended life span of 8000 hours in Power Saver Mode.

The LV-WX300USTi is backed by both Canon's Three-Year Limited Warranty, which guarantees that the projector will be free from defects in workmanship and materials for 3 years and the Lamp for 120 days (from the date of original purchase), and Canon's Projector Protection Program ("Triple P") a FREE service program that provides a loaner projector of equal or greater value in the event that a qualifying unit is in need of repair.

Equipped with Interactive pens and interactive software, the LV-WX300STi provides an immersive, engaging, collaborative experience for students, business people and viewers in general that can enhance the presentation or lecture experience. Interactivity supports dynamic student presentations and so much more. Using the LV-WX300USTi, teachers can record a math lesson step-by-step and then deliver it to each student to playback as a movie file. Among its many interactive features, the LV-WX300USTi permits up to four interactive pens to write simultaneously. Two pens are included with the projector. Innovative software functions include: Note Creation, Paint, Image Capture and Record, allowing the user to record while drawing, lecturing or presenting. The opportunities to connect with the audience increases by inviting audience participation, thereby enhancing presentation impact and message retention. An optional finger-touch module makes it easy to write on the projected screen without the need of an interactive pen. 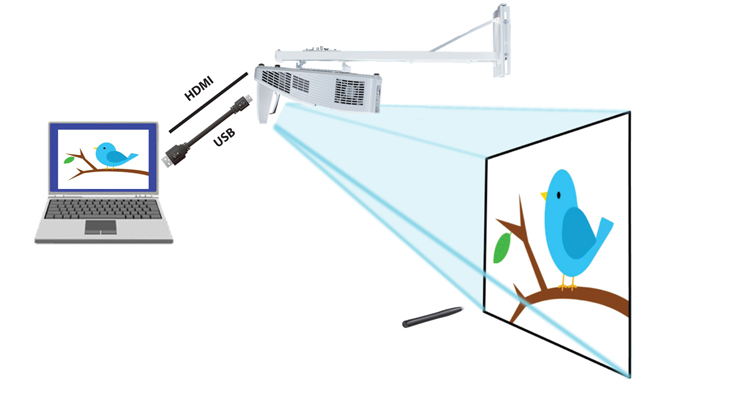 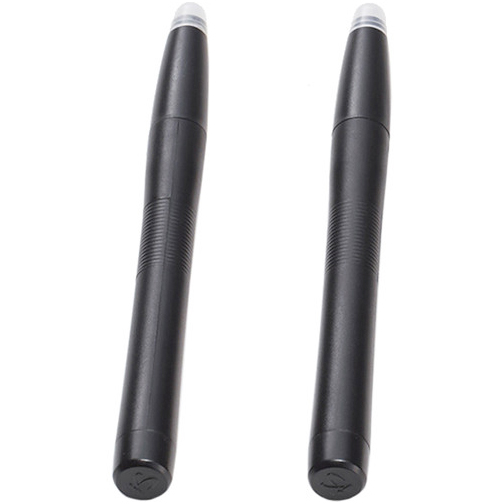 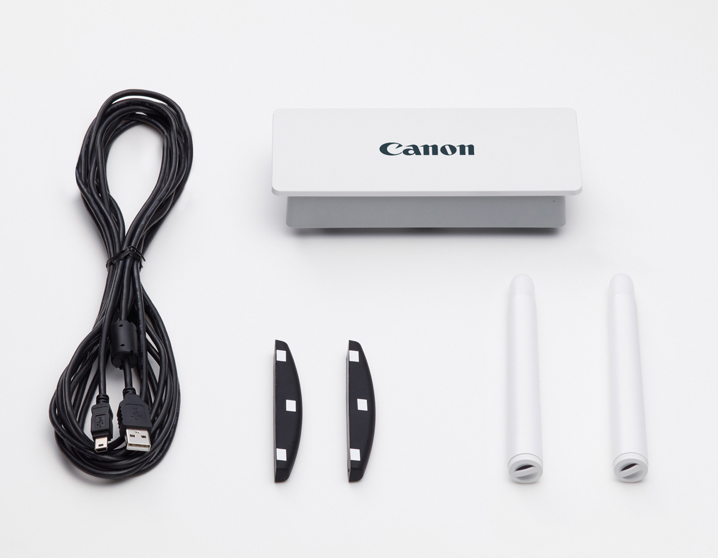 Optional Finger Touch Module allows for input without the need for an interactive pen.

Ideal for projection in space-restricted environments, the LVWX300USTi ultra short throw projector is the perfect choice for a range of markets including education, business, and advertising and digital signage to enjoy the benefits of a larger, high quality image displays. The throw ratio of the LV-WX300USTi is 0.35:1, making it possible to project an 80” image from approximately 11” away from the display surface. 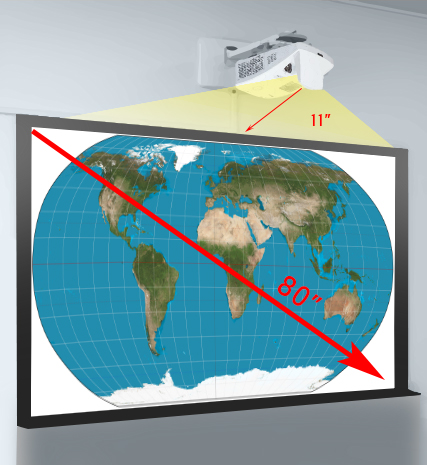 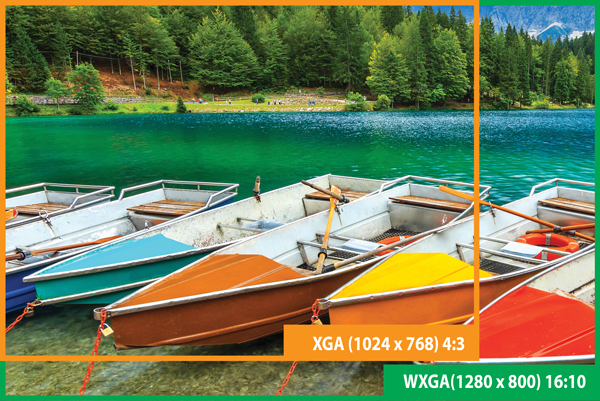 The LV-WX300USTi features a brightness rating of 3000 Lumens and a contrast ratio of up to 7500:1 to ensure that images display deep blacks and bright whites in a range of lighting environments. 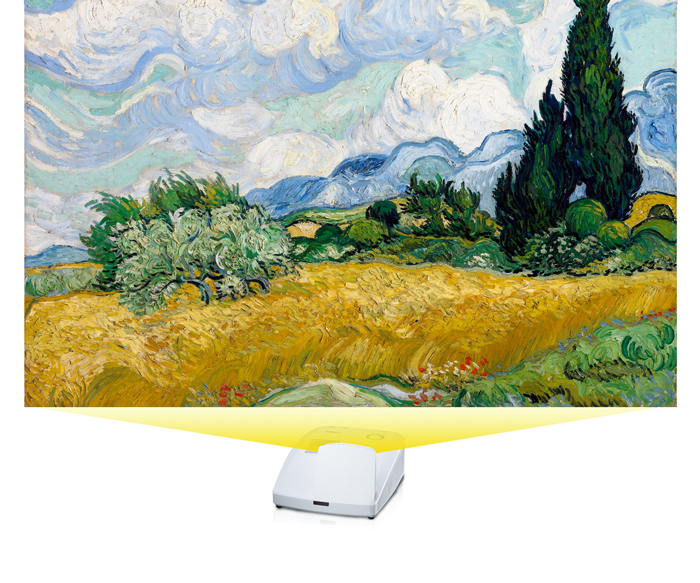 This projector utilizes Single-chip Digital Light Processing (DLP) technology which is a widely utilized projection technology that creates natural and lifelike images. The DLP technology utilizes a 6-segment color wheel along with a reflective Digital Micromirror Device (DMD) to produce video and images with high brightness. The resulting video and images maintain the details inherent in what you are showing. Sub colors of cyan (C) and yellow (Y) have been added to create the 6-color wheel, which increases saturation without adding white. By compensating for differences between white and the newly added colors, richer and more natural image reproduction can be achieved compared to a conventional 4-color wheel.

Maintenance is simplified by a filter-free design and lamp that has an extended life span of 8,000 hours in eco mode. Eco mode extends the life of the lamp up to 3,000 hours more than standard modes. Not only does this feature maximize the life of the lamp, it can also reduce power consumption while minimizing fan noise, complementing a pleasant experience in any environment. 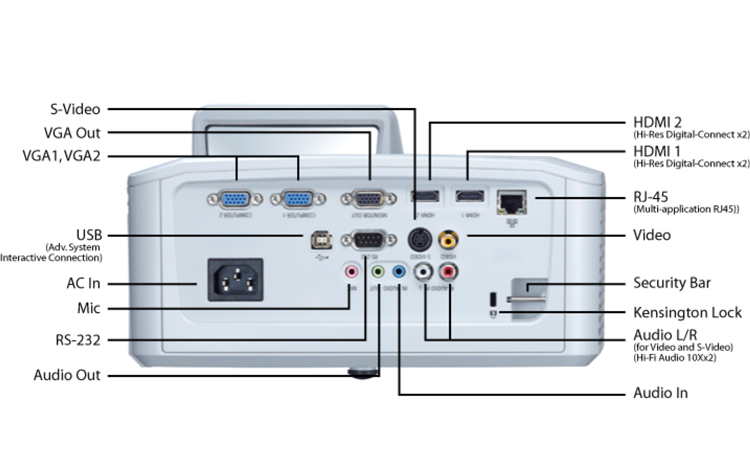 A Built-In Dual 10W speaker makes it easy to add sound in smaller spaces, eliminating the need for additional speakers and sound equipment. These projectors also have a microphone, another convenience.

Presentation: Ideal for projecting presentations that are comprised primarily of text.

Movie: Ideal for projecting images/videos that are colorful.

User: Users can adjust and customize image settings. Stored settings can be selected and saved in User image mode.

The compact design of the LV-WX300USTi has a width of 11.3 inches, a height of 7.6 inches and a depth of 14.7 inches ensures greater installation flexibility. Weighing approximately 11lbs, the projector makes it easy to provide large images in tight spaces with fewer shadows. Installation options include ceiling, table or rear projection mounting. An optional wall mount minimizes long cable runs that are typical with ceiling installation. 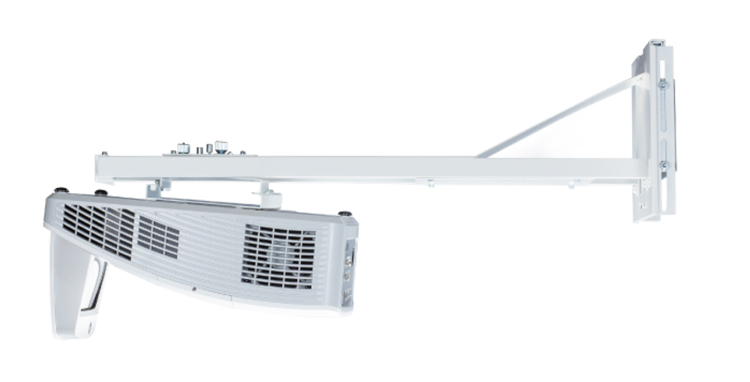 This model is capable of projecting 3D content via the DLP-Link System. Utilizing a 3D Blu-ray player along with DLP Link 3D glasses for your audience, this projector will display bright 3D images. 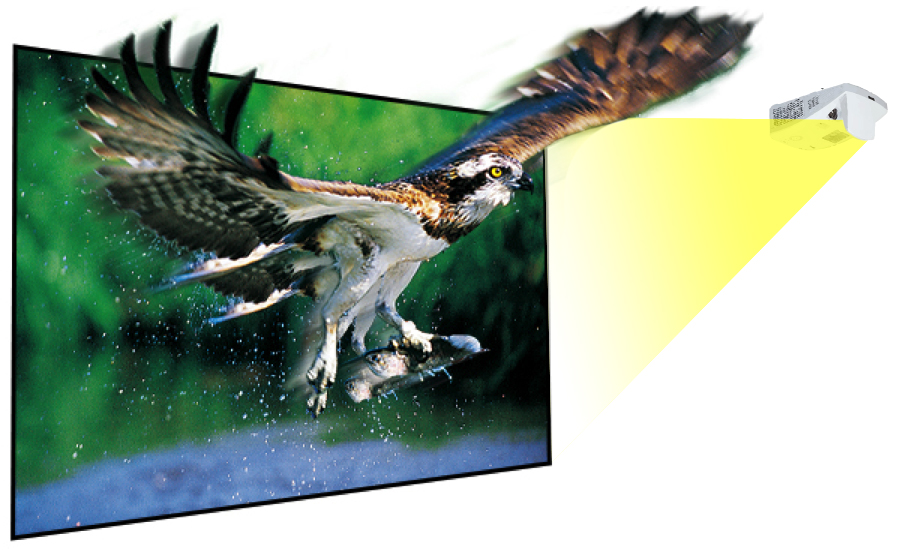 Canon 3-Year Projector & Lamp Limited Warranty
All Canon Projectors offer peace of mind as they are backed by Canon USA's Projector and Lamp Limited Warranty, which guarantees that the projector will be free from defects in workmanship and materials for 3 years from the date of original purchase, and the Lamp for 120 days from the date of original purchase. For complete terms and conditions click here.

*Programs and service offerings subject to change without notice. For complete details, including terms and conditions for each program, or to learn more about Service and Support offerings for Canon professional projectors, please contact a Canon sales rep or call 1-800-OK-CANON.

This is to make Misc appear on the page when needed.

Canon offers a wide range of compatible supplies and accessories that can enhance your user experience with you LV-WX300USTI that you can purchase direct. Scroll down to easily select items to add to your shopping cart for a faster, easier checkout. Visit the Canon Online Store

† Prices and specifications subject to change without notice. Actual prices are determined by individual dealers and may vary.