Map showing the path of the eclipse

In our introductory article, we mentioned that advance planning is very important in viewing and photographing the total eclipse of the sun on August 21, 2017.

Well, just like buying and selling real estate, it’s all about location.

Totality’s shadow (umbra) in August will average about 65 miles in width and will race across the United States starting at about 2,900 mph in Oregon to almost 1,500 mph as it leaves the United States off the coast of South Carolina and into the Atlantic Ocean. At these speeds it will only take about 93 minutes to cross the country.

Here’s a great link to an animation of the path of totality across the United States beginning in Oregon and ending in South Carolina. Then follow this link for a bird’s-eye fly-over as you fly from Depoe Bay, Oregon all the way to Awendaw, South Carolina.

Now that you know where totality will be, you’re confronted with the decision of either driving to the path of totality or settling for a partial eclipse. There’s nothing wrong with a partial eclipse, but considering the next total eclipse to touch the United States is in 2024, why not go all out and try for totality.

If “life” gets in the way of viewing the eclipse in totality, you will still be able to view a partial eclipse. If you live in the southwestern arc of the eclipse from Los Angeles, Phoenix, El Paso and San Antonio, you will see about 70% coverage.

If you live in the northeastern arc from Minneapolis, Milwaukee, Cleveland, Pittsburgh and Washington D.C., you’ll see about 85% coverage.

To the extreme northeastern arc from New York City north, you will see 75% coverage to about 60-65% coverage in Maine. All considered, the entire country will see an eclipse of some degree.

If you’re lucky enough to live “in the shadow” you’re still not guaranteed a view of the eclipse. If you live near a beach on the Oregon coast for example, you will likely wake up to the typical early morning cloud cover/fog until noon. Especially during the summer. So, people in areas with regular weather conditions like this should consider a more inland based location that would be less likely to have these issues.

The same applies to the Midwest or south. Summer is the time for thunderstorms. You’ll need to closely watch the weather. If you’re in the mountains, what are the chances for clouds? Mountains and valleys can create clouds so this is something to consider as well.

As we get closer to the eclipse date, all weather stations across the country will be making their best predictions for their regions. Local weather newscasters are more familiar with weather traits so we’ll need to pay close attention to their forecasts. Local newscasts are more reliable than national overview weather sites.

The partial phase (beginning) of the eclipse, referred to as first contact, will begin on the west coast about 9:05 a.m. PDT and, on average on the east coast, about 1:20 p.m. EDT. Here’s a link to a map of the times for first contact across the United States.

Totality will begin on the west coast at about 10:15 a.m. PDT. The Midwest will view totality about 1:15 p.m. CDT and the east coast will see it about 2:45 p.m. EDT. Here’s a link to a map showing the beginning of totality across the country.

The eclipse will end on the west coast about 11:35 a.m. PDT and about 4:10 p.m. EDT on the east coast. Check this link for the map that shows the end of partial eclipse (fourth contact) for your region.

The time of day also plays into weather forecasting because, depending on where you select to view this eclipse, the altitude of the sun will be different across the country for the beginning of partial eclipse (first contact), totality and the end of the eclipse (fourth contact).

On the west coast totality will see the sun over the horizon at about 38º above the horizon while in the Midwest it will be nearly overhead at 62º. The east coast will view totality in the afternoon about 2:45 p.m. and the sun will be toward the west sky approximately 62º overhead.

These are important considerations if you’re planning to create a single-frame time-lapse with horizon detail such as trees or a recognizable rock formation.

The altitude of the sun is also important of you are considering a location in a valley that may have a large mountain or other obstruction looking east. Make sure the sun’s altitude will have cleared any obstruction to the east.

It is estimated that 225 million people live within a day’s drive of the path of totality. If only a tiny fraction of these people decide to drive to totality’s path, expect crowded roads, heavily used roadside services such as gas stations and restaurants. Be sure to plan your room accommodations well in advance. 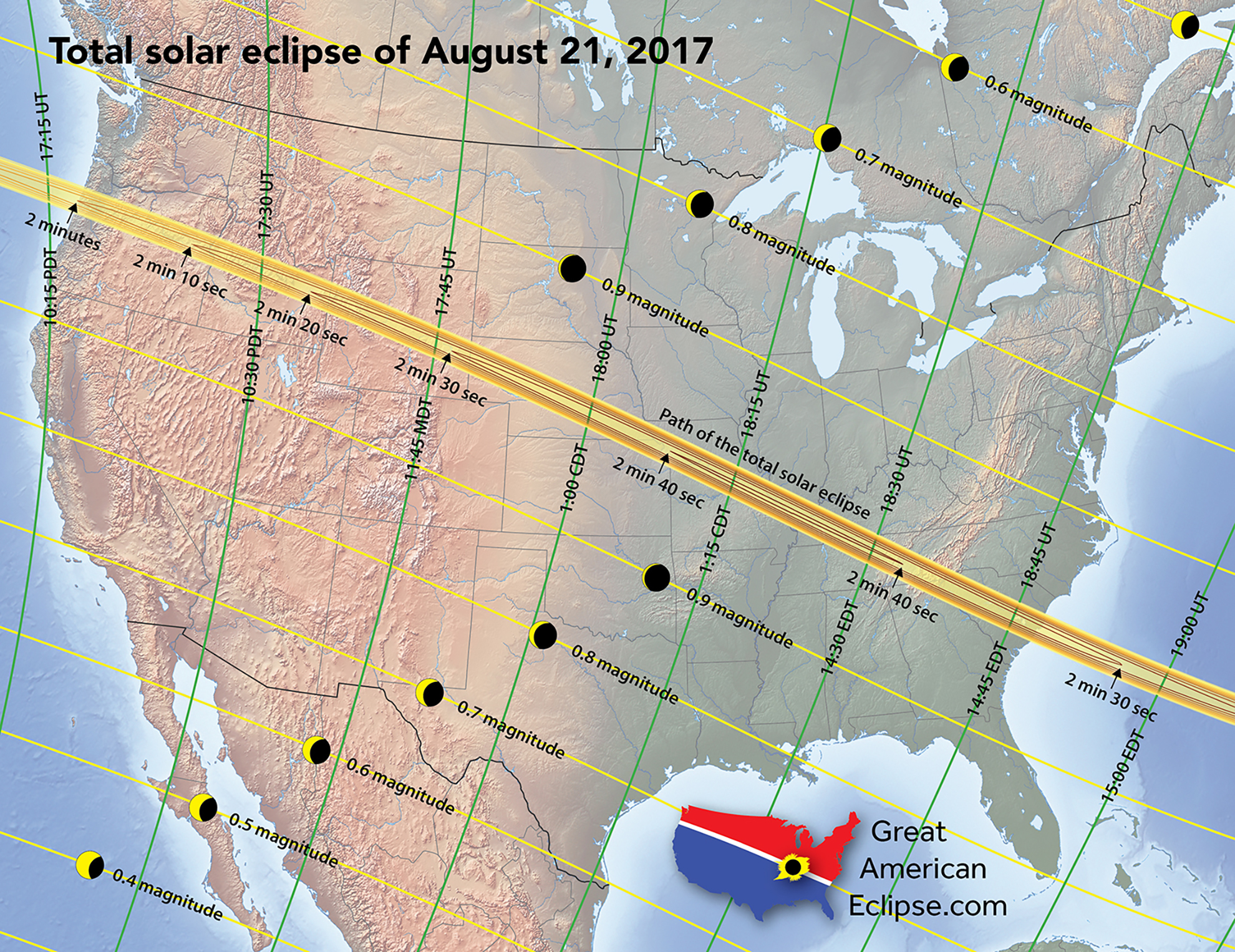 In many locations weather conditions are more likely to occur in a predictable pattern in mornings or afternoons. If you are planning to view the eclipse from the eastern half of the United States, you should research good viewing areas that are less prone to inclement weather in the afternoon. The opposite would be for planning on the west coast as totality will be in the morning.

The big dilemma is what to do if you have less than optimal viewing conditions the day of the eclipse. In most populated areas, you probably won’t have the ability of speeding to a new location because there will likely be hundreds of thousands of other eclipse gawkers thinking the same thing. Several experts have referred to it as “a logistical nightmare.” Just be ready for massive traffic jams if clouds should appear just before the eclipse begins and have a well thought out exit strategy in place.

In a worst case scenario, make the best of what you have. During the 2013 total eclipse of the sun in Australia, thousands anxiously waited for the possibility that the heavy clouds would break. At the moment of totality, they were treated to the totality experience. Don’t give up hope.

In Dave’s home town of Sacramento, California, a quick poll of several Sacramento area weathercasters indicated they are planning continuous weather forecasting throughout the week prior to the eclipse. Even though Sacramento will only see about 83% coverage, it’s still enough for most people to have an outstanding eclipse experience. With weather typically in the upper 90s to a bit over 100º, there probably won’t be an issue there. Download your local station’s weather app to your phone or tablet. That way you’ll have up-to-date information at your fingertips.

You might even consider a weather app such as RadarCast for your smartphone to watch live Doppler Radar if you suspect inclement weather on the day of the eclipse. There are several to choose from so find one that works best for you.

Make plans to bring everything you might need with you such as food and drinks. Also plan on hot weather. After all, it is August. We’ll cover more about what to bring in greater detail as we get closer to the eclipse date.

Last year most serious photographers and scientists already researched their picks for areas to consider for covering the eclipse. So, if you can carve out some time before August, it would be to your advantage to drive and scout a couple locations just to see what’s there.

In an article on Space.com, NASA heliophysicist C. Alex Young mentioned in a December, 2016 American Astronomical Society talk that “Every single person that I talked to [who has seen a total eclipse] has said it is a life-changing event.”

Our experience is the same. Most of us will never look at our lives quite the same way after August 21, 2017. The importance of family and friends seems to take on another meaning as we tend to bring them in closer. Watching the moon and earth perform this delicate alignment ballet, as we race through space, brings our squabbles here on earth into a different perspective. We realize there is stuff bigger than us.

Again, it will be thrilling.

It will be one of the greatest shows on earth.