Face Detection technology is something photo enthusiasts are hearing more and more about with mirrorless interchangeable lens cameras — but it hasn’t been prevalent in digital SLRs. The Canon EOS 90D raises the bar for digital SLRs, and offers this powerful feature in a variety of shooting situations. Most noteworthy is the EOS 90D’s ability to use Face Detection technology when shooting through its optical viewfinder, something not possible on mid-range Canon EOS DSLRs before. In this article, we discuss the EOS 90D’s ability to work with Face Detect AF when shooting through the viewfinder. It’s a new capability in Canon EOS mid-range DSLRs, and it can automate the process of putting sharpest focus on a subject’s face — potentially both saving time, and permitting a higher percentage of sharp images when people are the primary subject in a scene.

Canon engineers have stepped-up the EOS 90D’s basic exposure metering system, and this plays a major role in its AF capabilities with Face Detection as well. The metering sensor is now a 220,000 pixel RGB sensor, located near the viewfinder in the prism area of the camera. (The previous EOS 80D model had a much simpler RGB light metering sensor, with 7,560 pixels.) Think of this light metering sensor as a tiny “imaging sensor,” obviously much smaller and with far fewer pixels than today’s high-res image sensors.

With 220,000 pixels, the metering system can do far more than simply measure brightness. It can read color information, and now has sufficient pixel resolution to recognize human faces — not just skin tones — when viewing and composing through the viewfinder.

This same RGB metering sensor does an excellent job of exposure control, and reads and controls E-TTL flash exposure as well. For our discussion, however, we want to turn to its ability to read actual subject and scene information, and provide that info to the EOS 90D’s 45-point AF system.

A bit of explanation may be helpful here, even though the concept of combining basic light metering with color detection is not new with the EOS 90D. Canon has used color-sensitive RGB metering sensors in EOS digital SLRs for a number of years. Armed with the ability for the exposure metering system to detect a subject by its color, general shape and size, Canon engineers named this system “EOS iTR,” which stands for Intelligent Tracking and Recognition.

With the ability to read color, if a photographer put a focus point upon a particular subject in a scene, the metering system would “look” around the subject, detect its general shape and color, and now be able to identify where it moves throughout the AF point coverage area. If the subject did indeed move, the RGB metering system would feed that information to the AF system, and active AF points could move to continue to place sharp focus upon a moving subject.

Face Detect AF, when shooting through the viewfinder

When the EOS 90D is set for Automatic AF Point selection — you’ll see a set of thin, black lines, surrounding the 45-point AF area in the viewfinder — by default, it’s set for both “EOS iTR” and “Face Priority.” This applies in most fully-automatic exposure modes (like the green Intelligent Auto mode, Portrait mode, and so on), as well as the Creative Zone shooting modes (P, Tv, Av, and M). Aim the 90D at a subject, activate AF, and if a face is detected within the AF point area, the camera will put AF points on it, and continue to follow that face if it moves left, right, up or down, across the scene. 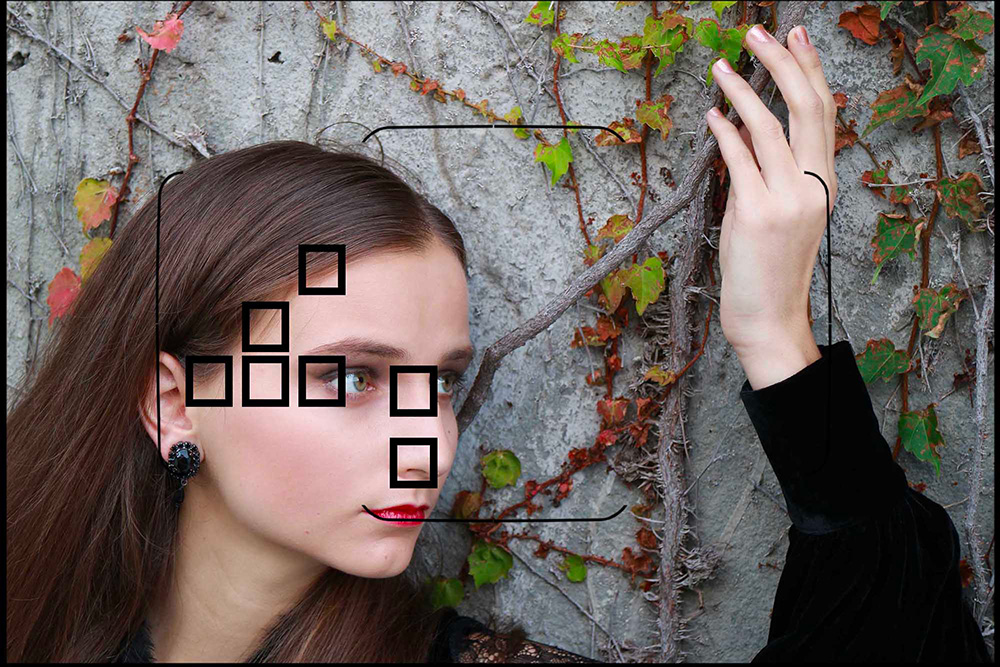 Face Detect AF can simplify and speed-up the process of putting AF points, and sharp focus, upon a face in a scene. In this simulated graphic, you see the active AF points (during Automatic AF Point selection) indicated, showing that the AF system is upon the subject’s face. As in previous mid-range EOS models, Automatic AF Point selection is indicated by the thin outlines, surrounding the 45-point AF points in the viewfinder.

This can be a remarkable way to quickly put focus on faces, without taking the time to manually move an AF point or a zone of points from one part of the frame to another. It minimizes the problem of the camera inadvertently focusing on a distant background instead of a human subject, and perhaps even more important, is a great aid to ensure sharp focus actually falls upon a face — and not part of a subject’s clothes, or an accessory like a hat a that a subject may be wearing.

Face Detect AF is a capability that Canon DSLRs have had before, but until now, it was limited to full-frame cameras like the EOS 5D Mark IV and EOS-1D X Mark II. However, because they are full-frame cameras, their AF point coverage for viewfinder shooting doesn’t cover as much of the frame as the 45-point AF system in the EOS 90D. The smaller APS-C size image sensor in the 90D is actually a benefit here, because AF points can extend further toward the edges of their total covered image area in the viewfinder. What we’re saying is that Face Detect AF, using the EOS 90D, has the potential to be more effective for through-the-viewfinder shooting than on any previous EOS digital SLR camera. 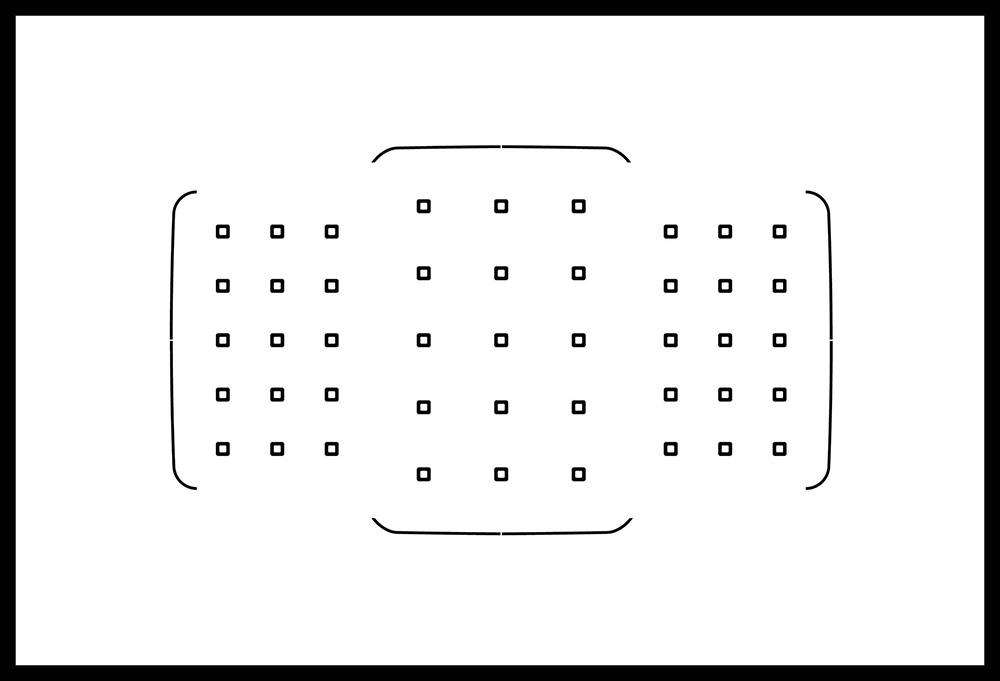 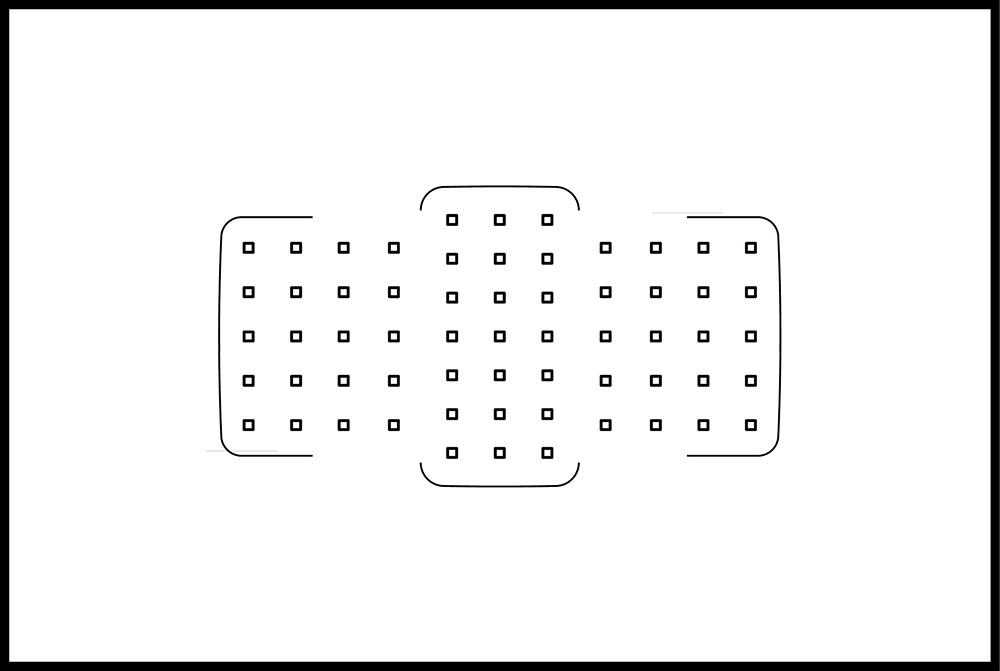 Because the total picture area captured by the EOS 90D’s image sensor is smaller, its 45 point AF system can cover more of the picture area, and reach further toward the edges of the frame, than a full-frame camera (EOS 5D Mark IV is shown above, on the right). This actually gives a camera with the smaller APS-C size image sensor an advantage, in quickly autofocusing upon off-center subjects.

AF Area is the size of the active AF point(s) coverage in an EOS DSLR’s viewfinder. When using a single AF point (or the new Spot AF option), focus is limited to strictly that one AF point, and photographers can precisely control what their AF system focuses upon in a scene. Users are free to move that single AF point to any of the 45 AF point locations, manually. The EOS 90D’s new 8-way Multi-controller, on the back of the camera, makes this extremely easy and intuitive. And, the Multi-controller can be customized for immediate, direct manual AF point movement. 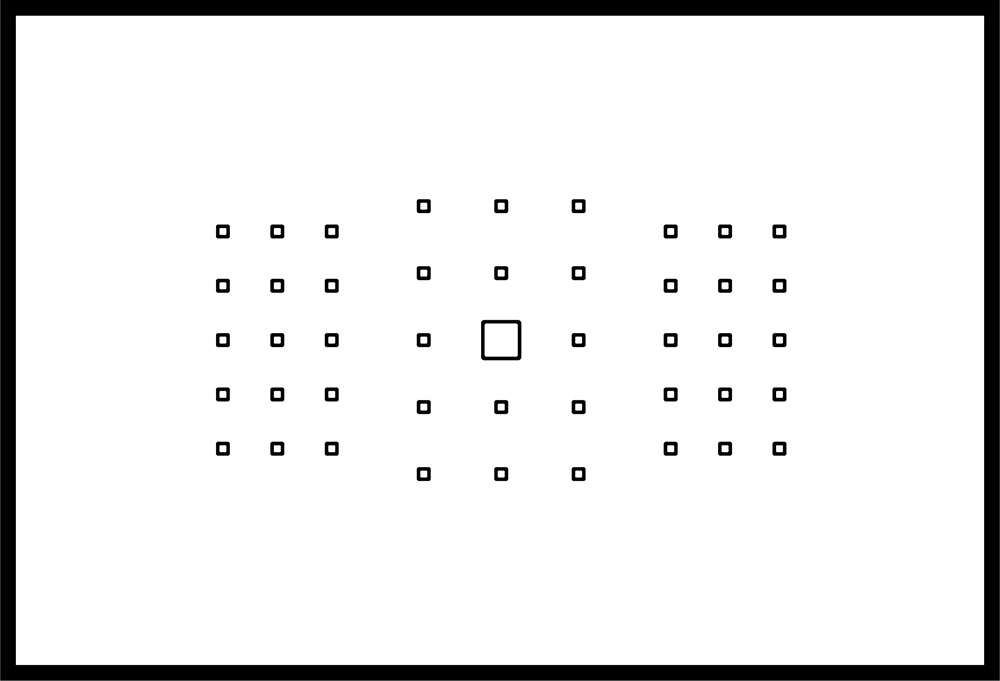 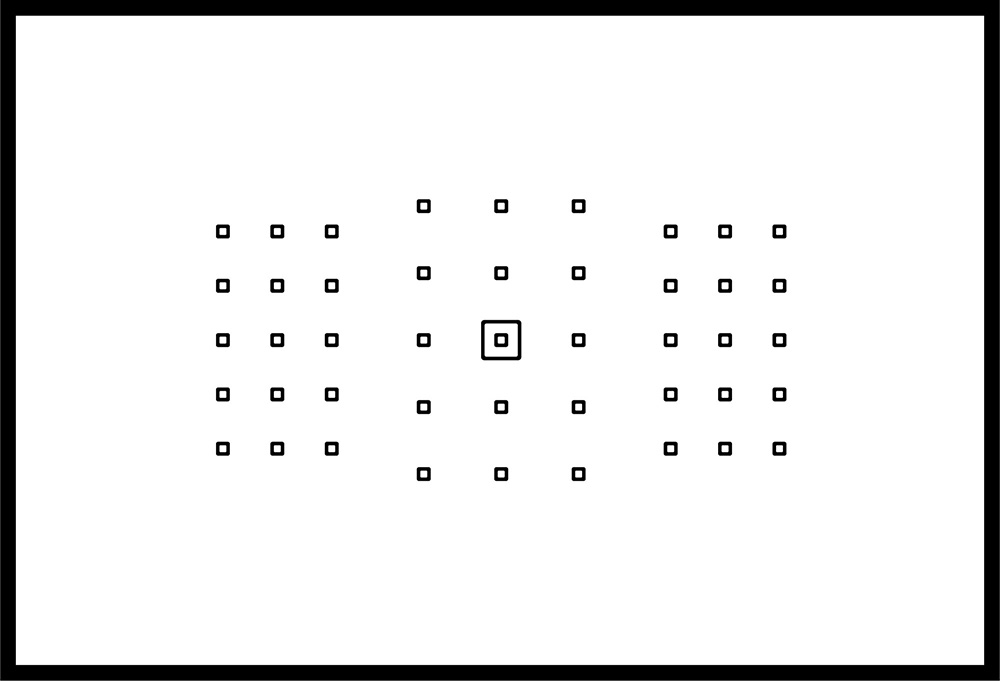 Experienced photographers who want precise control over the AF system can easily achieve this, with either the Single Point AF Area or Spot AF Area options in the EOS 90D. With either one, a single AF point can be manually moved to any of the 45 available AF point locations. Spot AF, using an even smaller sampling area for focus, is new in mid-range EOS DSLRs with the EOS 90D.

With larger AF Areas — Zone AF, Large Zone AF, and certainly Automatic AF Point selection — the camera will automatically decide which AF point(s) within the active area to use for a given scene and situation. Everything we’re saying about Face Detection and EOS iTR color metering applies in all three of these AF Area settings. 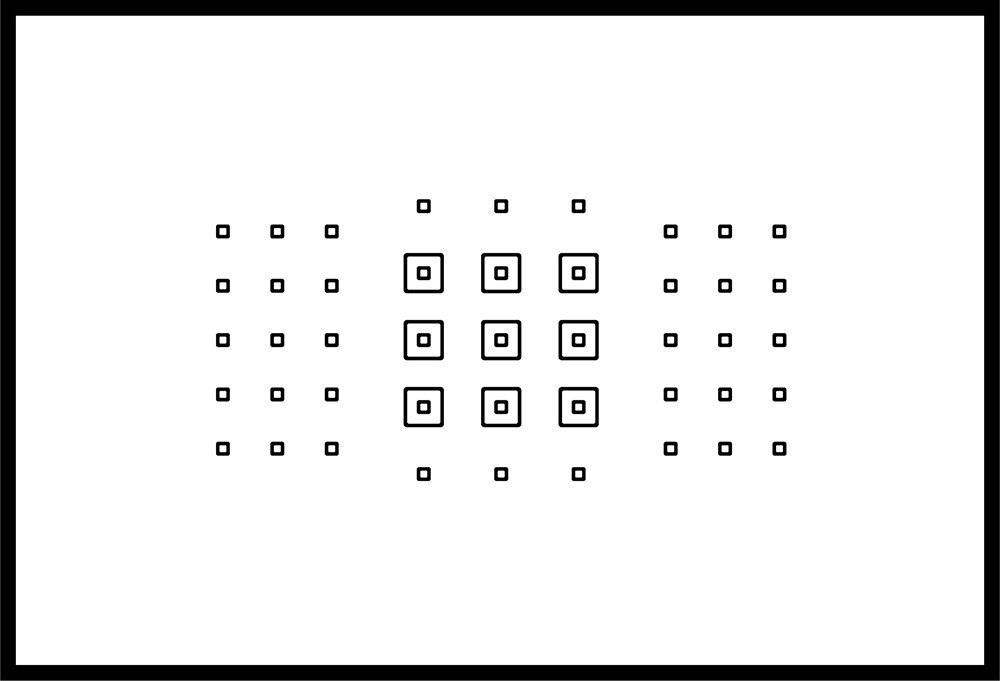 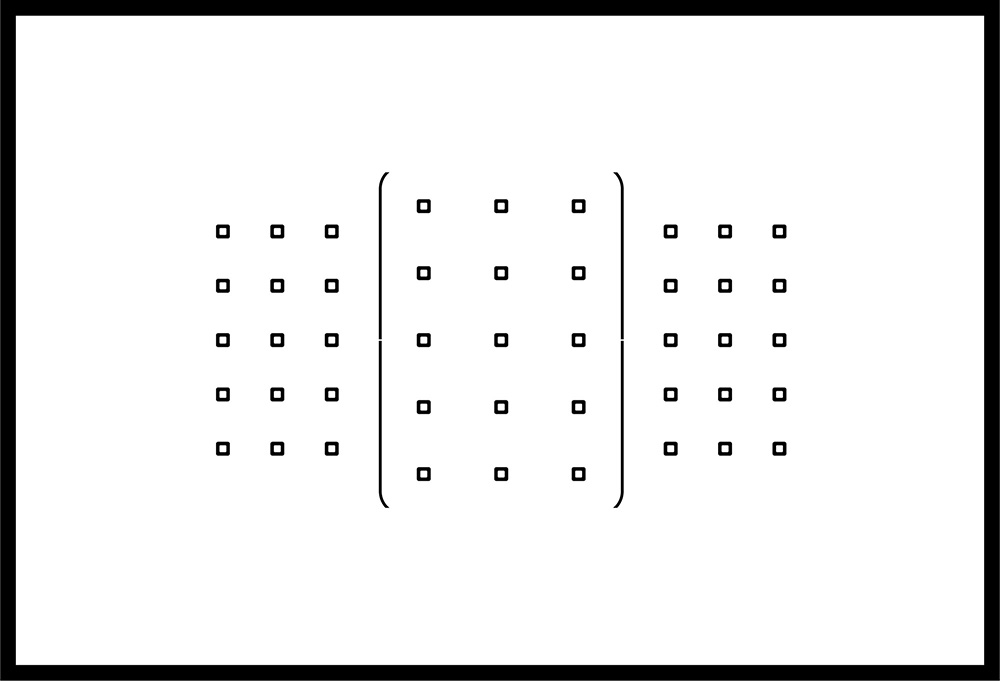 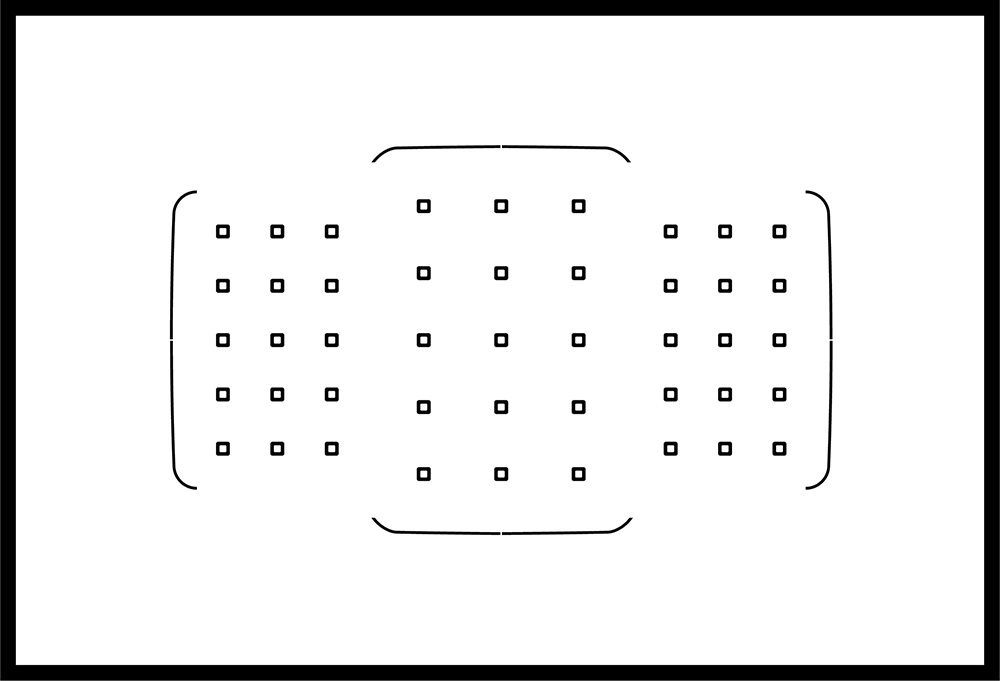 In any of the larger AF areas where the camera selects which AF point(s) to use, EOS iTR and Face Detection remain possible with the active AF points inside that AF Area. An example of Zone AF, Large Zone AF, and Automatic AF Point selection are all shown above.

Of course, EOS 90D users are free to select other AF Area options, beyond having all AF points active with Automatic AF Point selection. The choices for AF Area are Spot AF (a smaller, single AF point); Single Point AF; Zone AF (a cluster of AF points); and Large Zone AF (a choice of three larger clusters of AF points, which can be placed center, left or right in the 45-point array).

The ability to quickly and automatically put the sharpest focus upon a subject’s face is a potential game-changer for so many different types of photographers, from the casual amateur photographing his or her family to the enthusiast or working pro shooting events or fashion imagery. With the EOS 90D, users can continue to leverage the EF and EF-S lenses they’ve used before, and now have the ability to put focus on subject’s faces in many situations.

Experienced users will welcome the ability to use a single AF point, and manually place it where they want. And, the 90D adds Spot AF capability, underscoring the options for the enthusiast or even professional who appreciates careful and precise command over where the camera places sharpest focus. With the EOS 90D’s ability to automate the process of where to focus, and prioritize a human face in the scene, we’re confident that many experienced photographers will find a new tool to give them sharp pictures, especially in fluid situations where subjects and final compositions may be changing from picture to picture.