When focusing during Live View shooting, and during video recording, Canon’s Dual Pixel CMOS technology is one of the industry’s most effective methods of getting sharp, consistent focus. And that applies to both stationary and moving subjects.

What distinguishes Dual Pixel CMOS AF (sometimes abbreviated DPAF) from previous Canon AF systems for focus during Live View and video? And from many competitive systems? We’ll take a look in this article.

The first important thing to keep in mind is that this utilizes the phase-detection concept of focus detection. This means comparing multiple rays of light, and being able to immediately determine not just sharpness or lack of sharpness, but two vital things:

• Which direction the lens needs to be driven, to get sharp focus

• How far it will need to be driven

Many AF systems in earlier cameras — and in many competitive “mirrorless” cameras, as of April 2018 — either combine this concept with a support method called Contrast AF, or rely on contrast-based focus detection entirely.

Contrast detection usually can’t initially establish the direction to drive the lens for sharp focus, nor can it predictably halt the lens’ focus drive at the instant sharp focus is reached.  Instead, it reads sharpness of an area of the imaging sensor, and looks for when the greatest contrast among adjacent pixels on the image sensor occurs.

And, to get there, contrast detect AF usually has to rock the lens back and forth, past the point of sharpest focus, then reverse the lens and move its focus again.  This can sometimes happen multiple times.

The Canon Dual Pixel CMOS AF method is 100% phase-detection, so the two primary benefits are always there when using autofocus with EOS DSLRs and mirrorless models with this technology at the imaging sensor.

Dual Pixel CMOS AF, as of April 2018, is the only industry AF technology that uses every pixel on the imaging sensor to detect focus, and also to capture actual image information for still and video imagery.  Focus can be detected anywhere, within a “live” area covering about 80% of the horizontal and vertical width of the entire CMOS imaging sensor. 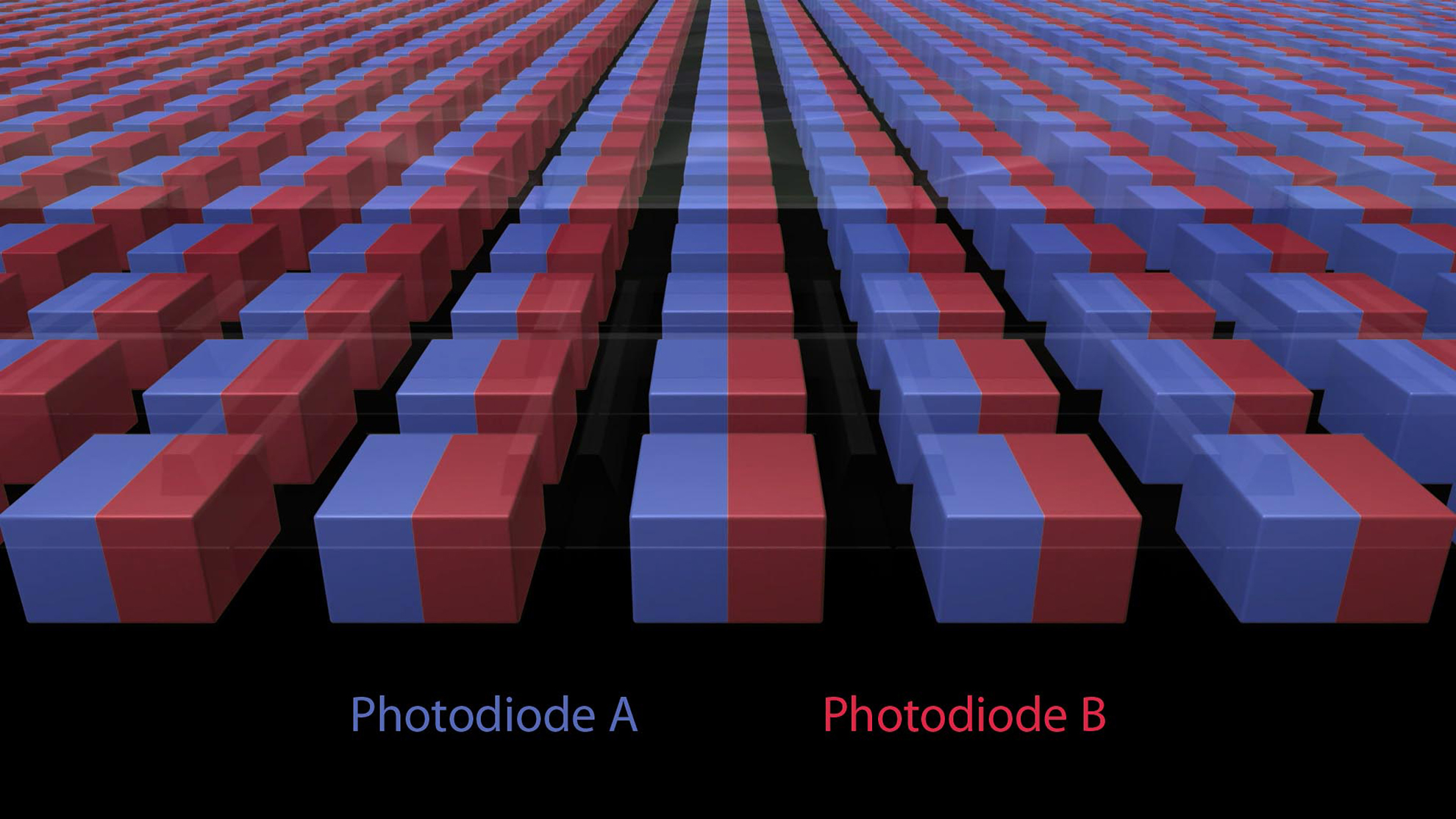 We’ll discuss in a moment how each pixel’s information is divided in two. But the important thing to initially understand about Canon’s Dual Pixel CMOS AF is that unlike competitive systems (as of April 2018), each and every pixel on the image sensor can be used for focus detection. In this conceptual illustration from Canon’s engineers, each “block” represents one pixel, and the blue and red halves of each represent the dual light-sensitive areas in each pixel, which are used for focus detection.

This is important, and a reason for DPAF’s smoothness when focusing upon many subjects. Unlike many other systems using phase-detection to focus off the imaging sensor, DPAF does not use scattered pixels on the image sensor, nor does it use pixels exclusively for AF (and requiring the use image information from neighboring pixels to fill-in the missing image detail from those locations used for focus detection). 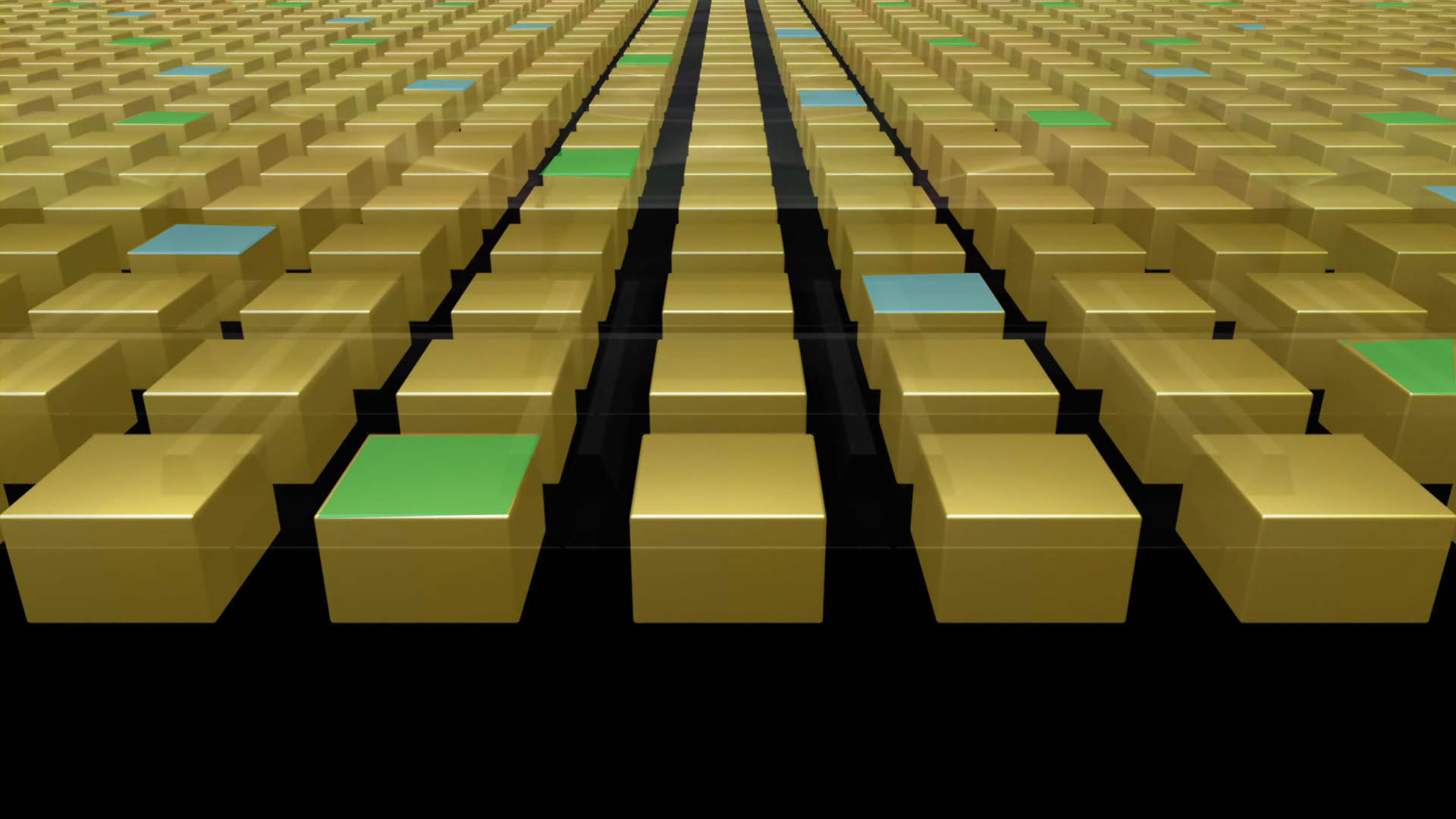 This conceptual illustration depicts one method of using scattered, individual pixels on an image sensor for phase-detect AF. Frequently, these pixels record brightness for focus detection only, and are “re-mapped” in processing to provide data for actual image recording. Information from pairs of pixels is compared to determine focus, which are illustrated here in green and blue. One problem with this approach is it often is not able to gather sufficient information for true focus control in a variety of situations, so contrast detection is added as a backup for AF — and remember, contrast detection often has issues with being forced to “hunt” back and forth, and so on. Again, this is a conceptual illustration only, and not a literal depiction of competitive phase-detect sensor layouts.

Accordingly, you won’t hear claims of focus from “xx number of AF points” with Dual Pixel CMOS AF. It’s not restricted to limited numbers of locations on the image sensor, where dedicated pixels for AF replace ordinary light-gathering pixels, for focus detection exclusively. Information from each and every pixel is available, before image recording of a still image or video frame, to contribute to determining sharpness at the area of a subject you’ve asked it to focus upon.

The area of each pixel on a digital camera’s image sensor that records brightness is called a photodiode. This tiny area acts like a miniature light meter, and when an image is recorded, it generates an electronic signal in proportion to how much brightness it received. The greater the brightness at a given pixel, the greater the strength of the signal it generates.

Sophisticated processing from each pixel is used to assemble these millions of individual electronic signals into recognizable frames of video, or still images.

Dual Pixel CMOS AF takes this concept and expands upon it. Every pixel on the CMOS imaging sensor has its light-sensitive photodiode split in two. There’s a distinct left and right half, which for our purposes we can label the A and B parts of each pixel. Each can detect light, and during focus detection (before each video frame is recorded, or before a still image is actually recorded), it delivers two separate signals — independent ones for the A-side and B-side. 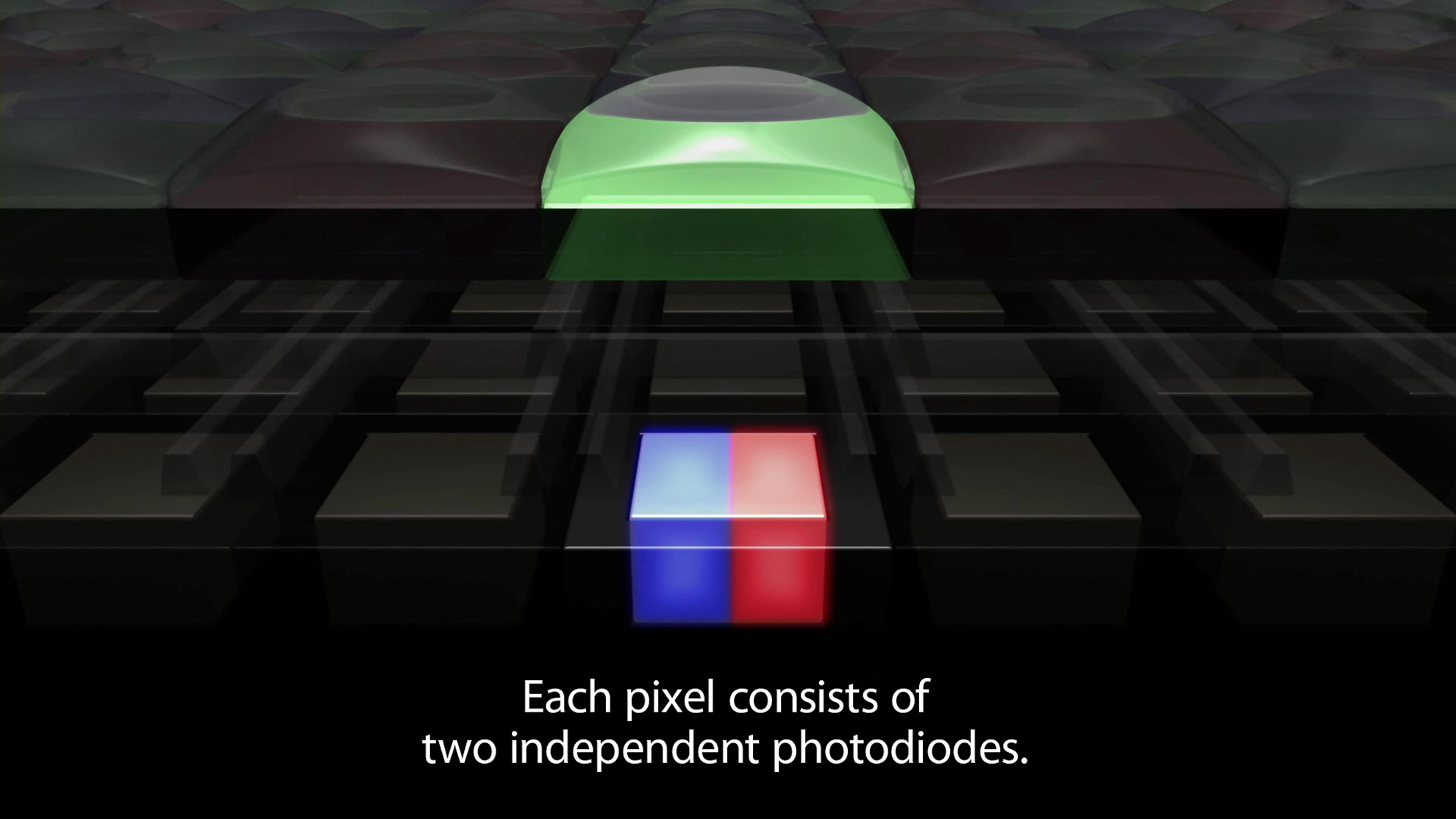 During focus, the two light-sensitive areas of each pixel operate independently. Each receives light from the camera’s lens, and sends its own electronic signals to a processor. These are gathered, and compared (A vs. B). From deviations between the two, Dual Pixel CMOS AF is able to detect whether the area being sampled is already in sharp focus, or whether we need to move the lens to a closer or more distant focus position to get the sharpness we need. 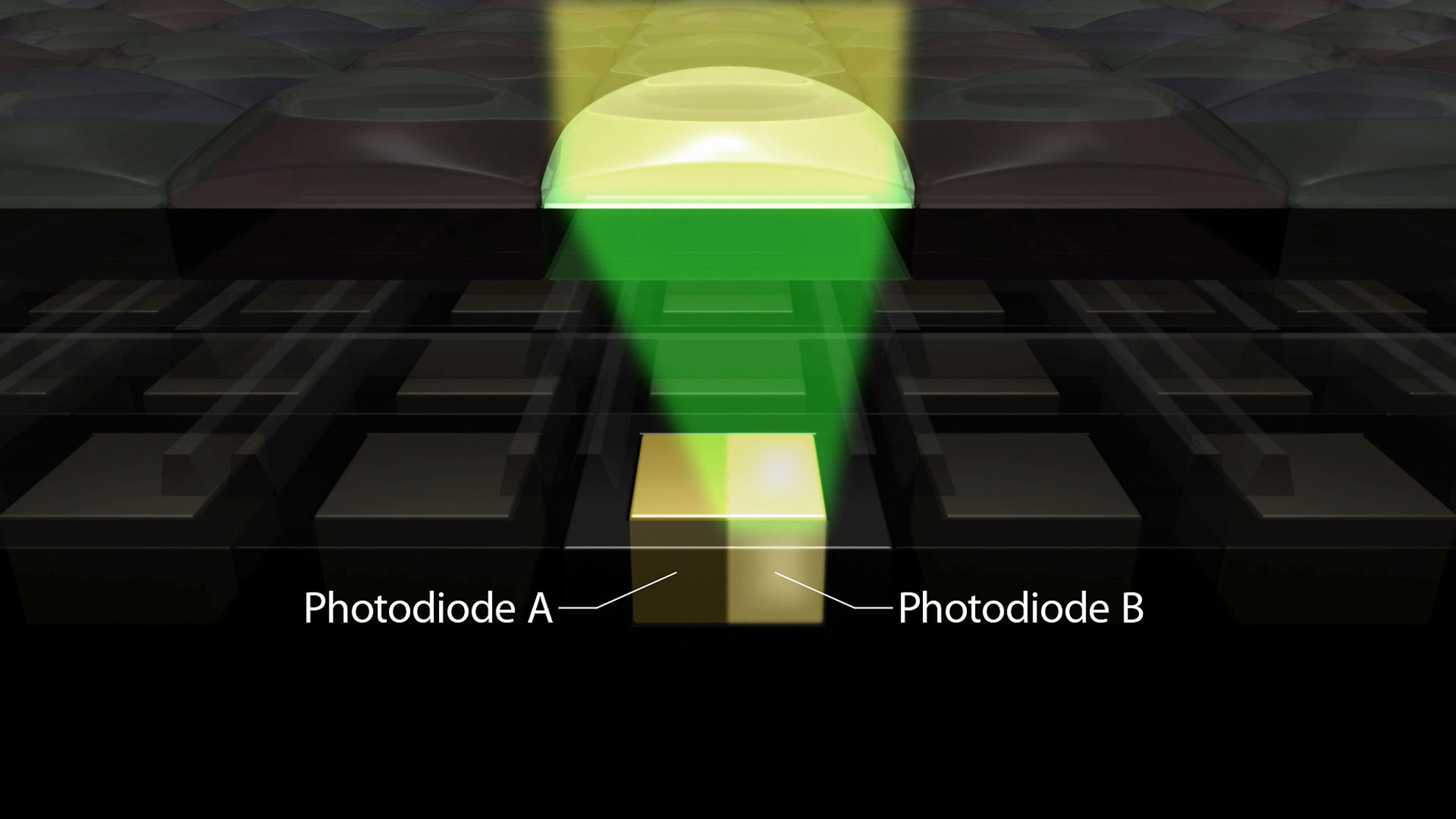 Here’s a conceptual illustration, showing how during focus, the “B” side of a pixel gathers light and delivers its own independent information to the processing system. When separate information from the A and B sides of groups of pixels is gathered, it can be analyzed and accurately provides sharp focus, during Live View and video recording.

The genius of Canon’s Dual Pixel CMOS AF is that when groups of pixels are assessed, the differences in read-outs from the A-side and B-side can detect focus. And in true phase-detect fashion, they don’t only see “sharpness,” but can instantly detect which direction the lens must move for sharp focus, and by how much. Again, this is done so effectively that there is no need for contrast-detection technology as a backup to ensure good, sharp focus. 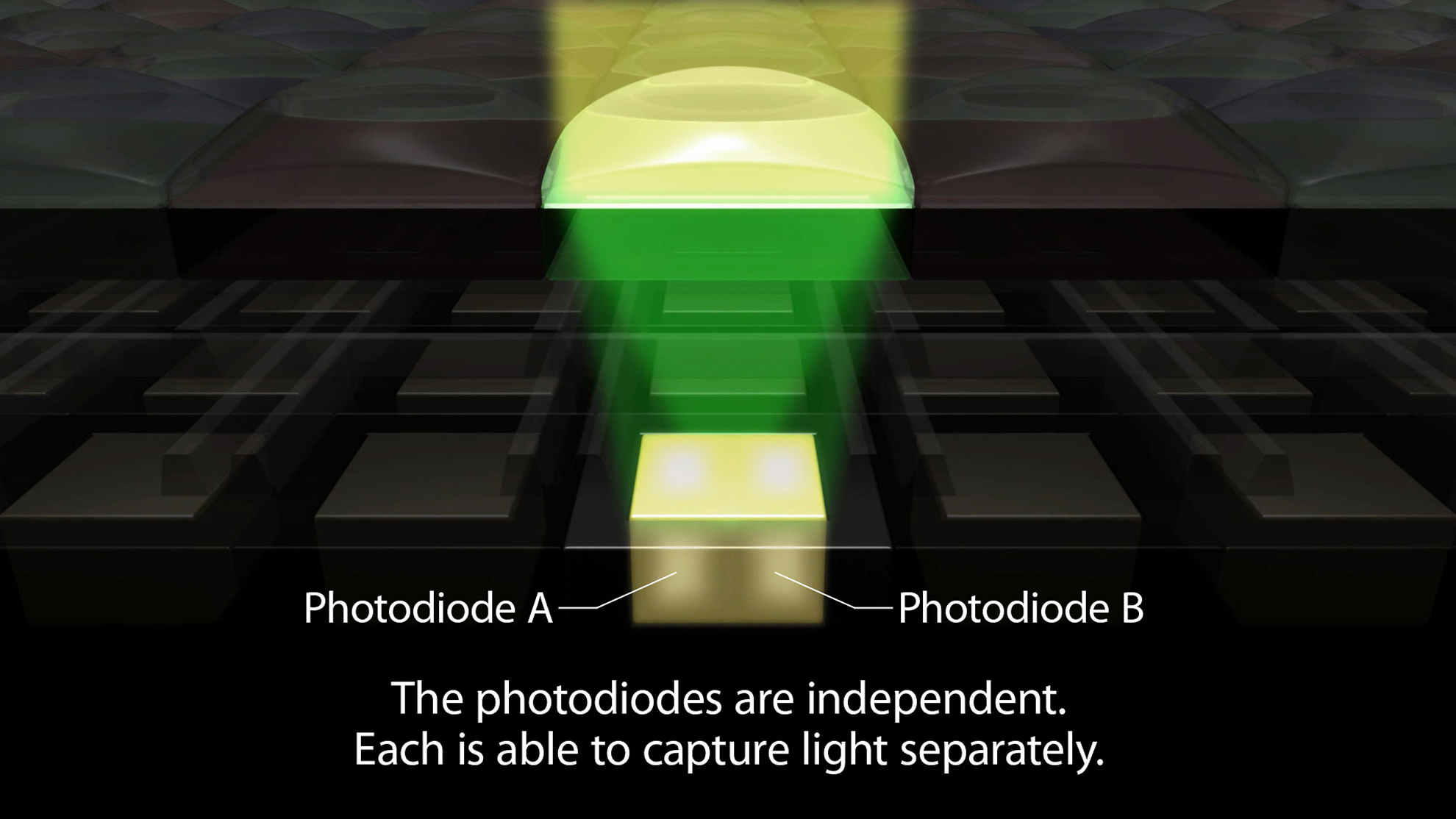 The split, light-sensitive areas of a pixel produce combined output an instant after focus detection, when actual gathering of light for image-recording is done. This is why, for example, the 24.2 million pixel CMOS sensor on a camera like an EOS Rebel T7i still records 24.2 million pixels of image data, even though each pixel is split in half for focus detection purposes.

Dual Pixel CMOS AF would be a cool innovation if it could only focus upon stationary subjects.  But a wonderful addition on recent EOS models, like the EOS 5D Mark IV, EOS 80D, EOS 77D, and Rebel T7i cameras is its performance when continuously focusing, especially with moving subjects.

Unlike many competitive systems, that have to update focus for moving subjects in successive lens movements — and you can see this, as a moving subject and its background both seem to visually “twitch” in and out of focus — Dual Pixel CMOS AF is able to provide smooth and continuous transitions, to follow moving subjects.

All you have to do is set the camera’s AF Operation from One Shot to “Servo.” With video or Live View active, with most recent EOS models having touchscreen operation, simply press the Q-button or Q-icon on the LCD monitor to call up the Quick Control Menu. Tap the AF Operation icon, and choose SERVO. (Models with DPAF, but without touchscreen — like the EOS 7D Mark II — require going into the red shooting menu, and setting MOVIE SERVO AF for continuous focus during video recording.)

This steady performance during continuous focusing is especially true with Canon lenses that are optimized for smoothest Live View and video AF:

Whether you’re using an EF, EF-S, or EF-M lens, if you see either of these technologies identified on the exterior of the lens, you know you’ll get the ultimate in smooth, positive AF performance when combined with Canon EOS cameras offering Dual Pixel CMOS AF.

Another brilliant aspect of Canon’s Dual Pixel CMOS AF technology is that its developers realized from Day One that to work effectively, it would have to provide the AF that video users need.  Not just simply “getting things in focus,” but getting it done the way a pro video camera operator would want to.

When we shoot still images, we normally want the fastest focus response possible. We press the button on the camera, and we want and expect that the image will jump into focus, without hunting back and forth, and without indecision from the AF system.

But video is different. If the sharp focus during a live video recording just instantly jumps from one distance to another, it’s normally a very jarring visual experience for viewers.  Think about it:  this is rarely done, unless for a very special, sudden visual impact, in movies or most TV shows. Instead, professional-recorded video normally smoothly transitions, or “racks,” from one distance to another.  There’s usually a smooth and much slower progression as focus changes from a foreground to background, or vice-versa.

Canon’s Dual Pixel CMOS AF does the same thing, when Movie Servo AF (sometimes labeled “Servo AF”) is active. Focus is deliberately slowed down, so that changes have a professional, smooth look to them.

And, on advanced EOS models (like the EOS 80D and 5D Mark IV), you have additional menu controls:

Adjust the rate of changes as you rack focus from near to far, or vice-versa…slow it down from the factory-default response in up to seven steps, or speed it up in two steps.  It’s done on a scale on the AF Speed menu, in the red shooting menu area. Camera must be set for video recording to display this menu setting.

How quickly will the Dual Pixel CMOS AF respond, if you’re focusing on one moving subject, and then something comes between you and that subject?  Will it instantly try to re-focus on the new subject, or allow time to find that original subject again?

These cameras have adjustments for Dual Pixel CMOS AF, when Movie Servo AF is active, to either make the system respond even faster and re-focus on new subjects (“responsive”), or instead to resist changes in focus if there’s a sudden change in what the active AF area sees (“Locked-on”). You can adjust up to three steps, in either direction, to fine-tune the camera’s response.

Especially when you combine the great responsiveness and control of the touchscreen interface on cameras like the Canon EOS Rebel T7i, EOS 77D, or EOS 80D, with the steady and positive action of Dual Pixel CMOS autofocus, it’s a truly winning combination — for Live View when you shoot still images, and of course for video shooting as well.

Dual Pixel CMOS technology is a tremendous engineering accomplishment, when you consider that it uses dual read-outs of data from each pixel on the image sensor, and processes those millions of pieces of information into smooth focus action. There are definite benefits to Canon’s traditional phase-detection AF when you focus through the eye-level viewfinder, but Dual Pixel CMOS AF adds a new dimension to what technology can bring to photographers when they want or need to focus using the LCD monitor instead. If you haven’t yet experienced Canon’s Dual Pixel CMOS, you owe it to yourself to see it in action at your Canon dealer.