The term “cross-type AF” has been used since the late 1980s in the camera industry, but perhaps not always with supporting information to clearly define what is meant by it. In this article, we’ll attempt to explain more clearly what the term means, and why it remains an advantage in SLR AF systems to this day.

To understand the cross-type AF concept, it’s helpful to take a trip down memory lane, to the early stages of autofocus SLR development.  First-generation SLR cameras, like Canon’s initial EOS 650 and 620 models from 1987, had a single AF point, located in the dead center of the picture area.  This obviously pales in comparison to the multiple AF points we see in the viewfinders of today’s DSLRs, but it was a huge technological leap forward for the late 1980s. 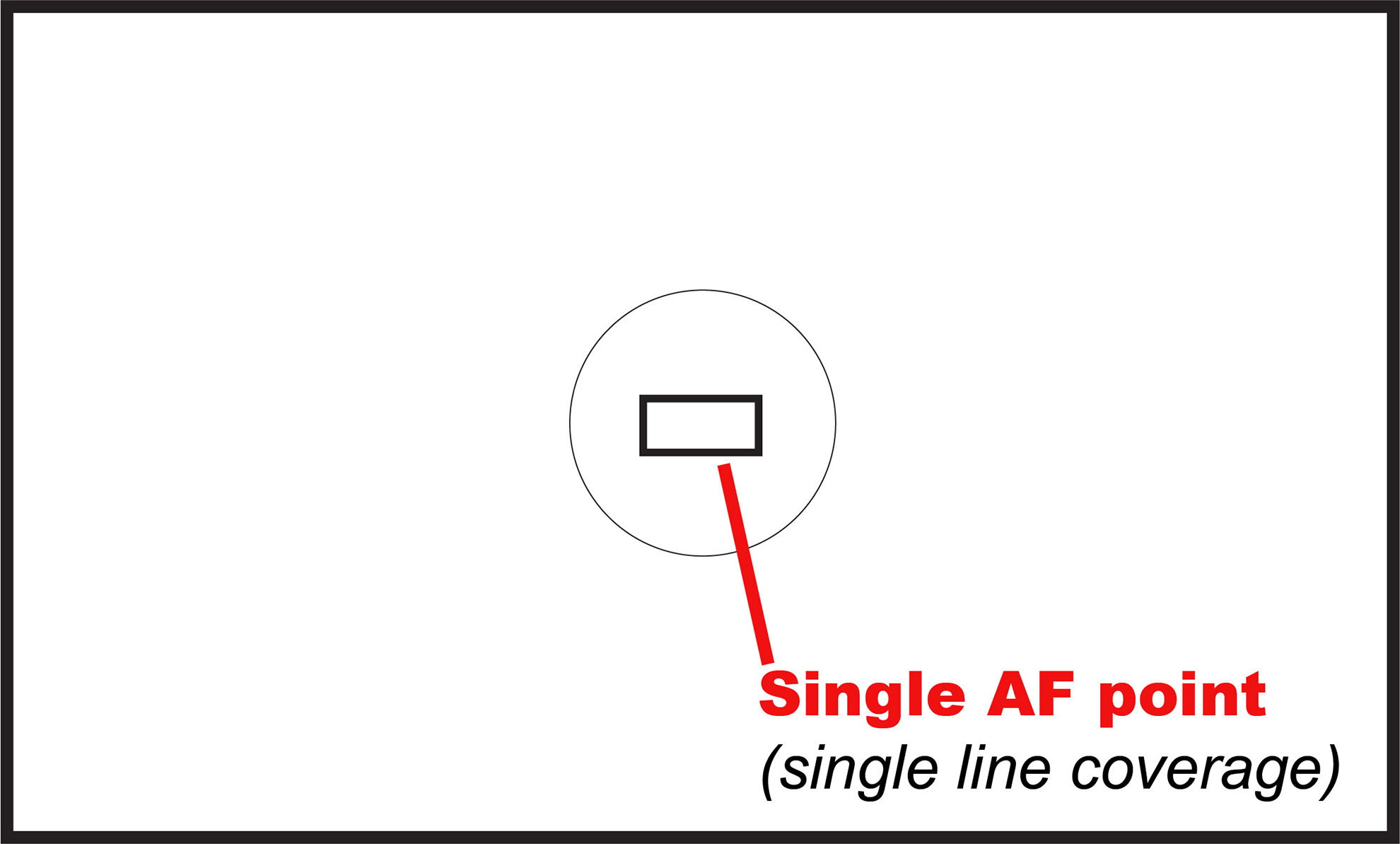 When the first AF systems appeared in the late 1980s, they used a single AF point, and that point used a single (usually) horizontal line of pixels on its AF sensor. It was fantastic technology for the time, but a built-in problem — as you’ll see in this article — is that the single focus detection line can easily have difficulty focusing on many real-world subjects. Cross-type AF points were subsequently developed, and continue to excel in the through-the-viewfinder, phase-detection AF systems in digital SLRs to this day.

The AF point you saw in the viewfinder was usually arranged horizontally, like a small rectangle in the center of the focus screen.  This corresponded to the actual sampling area it would use to read and detect focus, on the actual AF sensor in the camera body — effectively, a single line of pixels on the AF sensor.

Here’s what lies at the heart of the whole “cross-type AF” issue: for technical reasons, AF line sensors are able to read and react quickly when focusing on subjects running perpendicular to their linear direction.  But when presented with detail or lines in a subject that ran parallel to the direction of the line of pixels on an AF sensor, the focus system has much more difficulty reading and assessing sharpness. 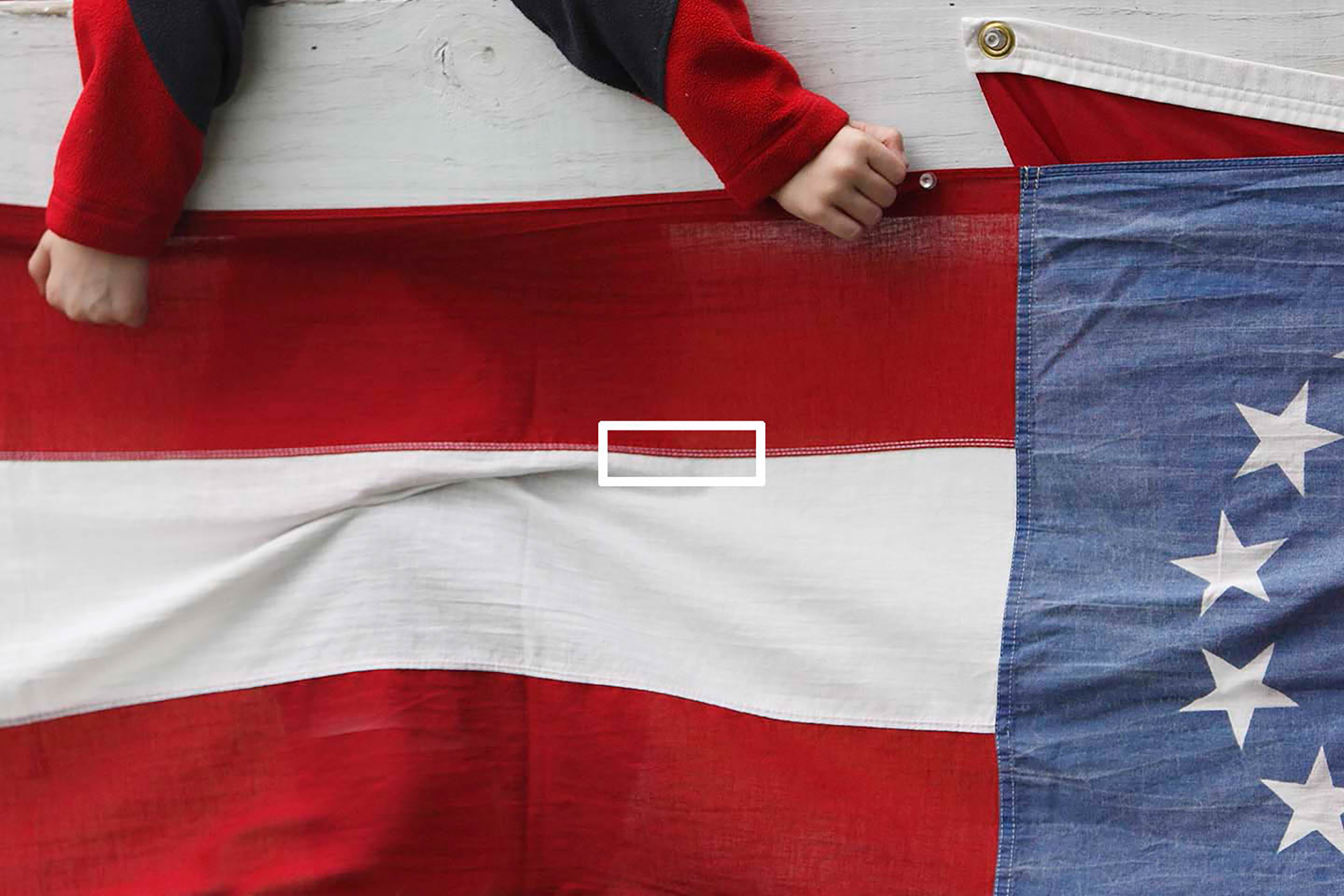 Look at the flag in this picture. In the center area, its primary area of contrast and detail is the break between its red and white stripes. If a single AF point with a horizontal line sensor is aimed at that area, the detail is parallel to the detection line on the AF sensor — and the sensor is essentially blind to it. This is a classic example of where cross-type AF technology would make a huge difference. With a cross-type AF sensor, the vertical line component of the sensor would have no trouble grabbing onto that same area of the flag.

The result is that AF often can have difficulty focusing on certain everyday subjects — even in bright lighting conditions.  Example: you may find your AF point focuses perfectly fine on the left and right frames of a doorway, but can’t seem to acquire focus if you move camera upward to try to focus on the upper, horizontal section of that same door frame.  The reason?  The frame runs parallel to the horizontal row of pixels on the AF sensor, being used for focus detection.  (This is a hypothetical example; some single-line AF points are arranged vertically on the AF sensor, and in that case, you may find those AF points have difficulty with real-life vertical subjects.)

Engineers realized this was and is a problem with SLR autofocus, and developed a solution: AF points that rely on two line sensors.  Arranged in a cross pattern (hence, the term “cross-type” AF), an AF point was now supported by two distinct rows of pixels on the AF sensor.  One row of pixels usually ran horizontally, and another row ran vertically. 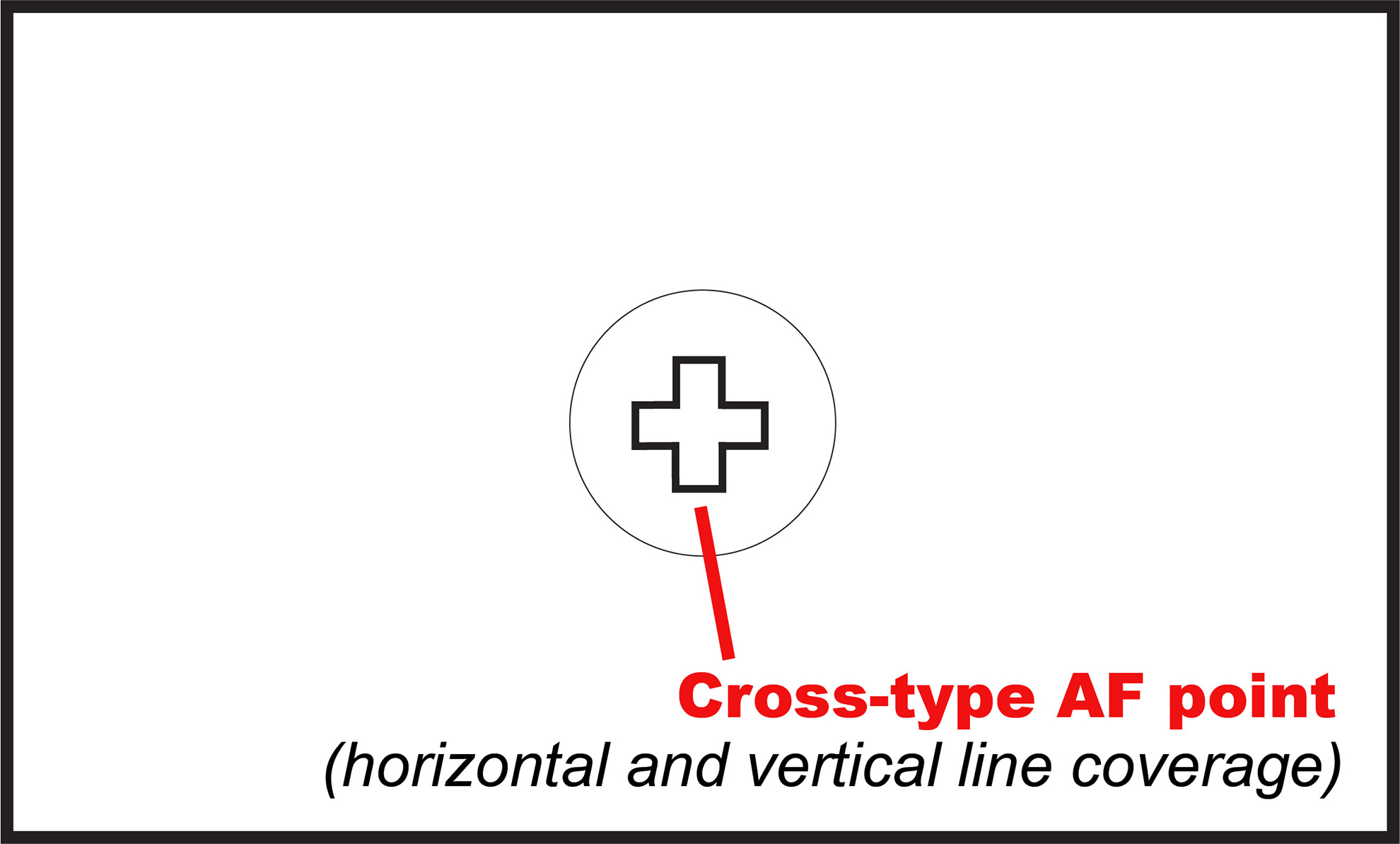 The first efforts at cross-type AF points simply added a vertical line sensor to the existing horizontal sensor, at one center AF point. Now, the AF system had twice as much information to work with, when aimed at a subject. This greatly increased the odds that AF would focus quickly and decisively on most subjects, whether their detail was primarily horizontal or vertical, or simply textured with little or no linear detail.

When aimed at a subject, the AF system now has twice as much information to work with.  And when presented with scenes where subjects had pronounced linear detail, if (for example) the horizontal part of the sensor couldn’t really perform good focus detection of horizontal detail, the vertical sensor could usually be counted on to focus quickly upon that same detail.

Cross-type AF has since become widespread among DSLRs throughout the industry, because of its effectiveness in quickly focusing on challenging subjects.

The Benefits of Cross-type AF Points

Technical Difficulty:  Getting Cross-type Coverage Away From the Center

When cross-type AF coverage first appeared for Canon users in the original EOS-1 professional camera in 1989 (35mm film camera), it was still limited to one AF point only, located dead-center.  Since then, engineers have worked hard to provide the benefit of cross-type AF coverage in AF points located away from center, toward the outer parts of the frame.  Even well into the 21st century, this remains a challenge.

But in recent years, Canon EOS users have been well-served in these areas.  For example, mid-range EOS digital SLRs beginning with the EOS 50D have offered cross-type AF at all available AF points.  More recently, this has extended to the remarkable 45-point AF system used in cameras like the EOS 70D and 80D, and now the EOS Rebel T7i and EOS 77D as well.  With most lenses, each and every AF point provides cross-type coverage.  This is a strong competitive advantage over some other SLR brands, which limit cross-type AF points to the central area of the viewfinder only. 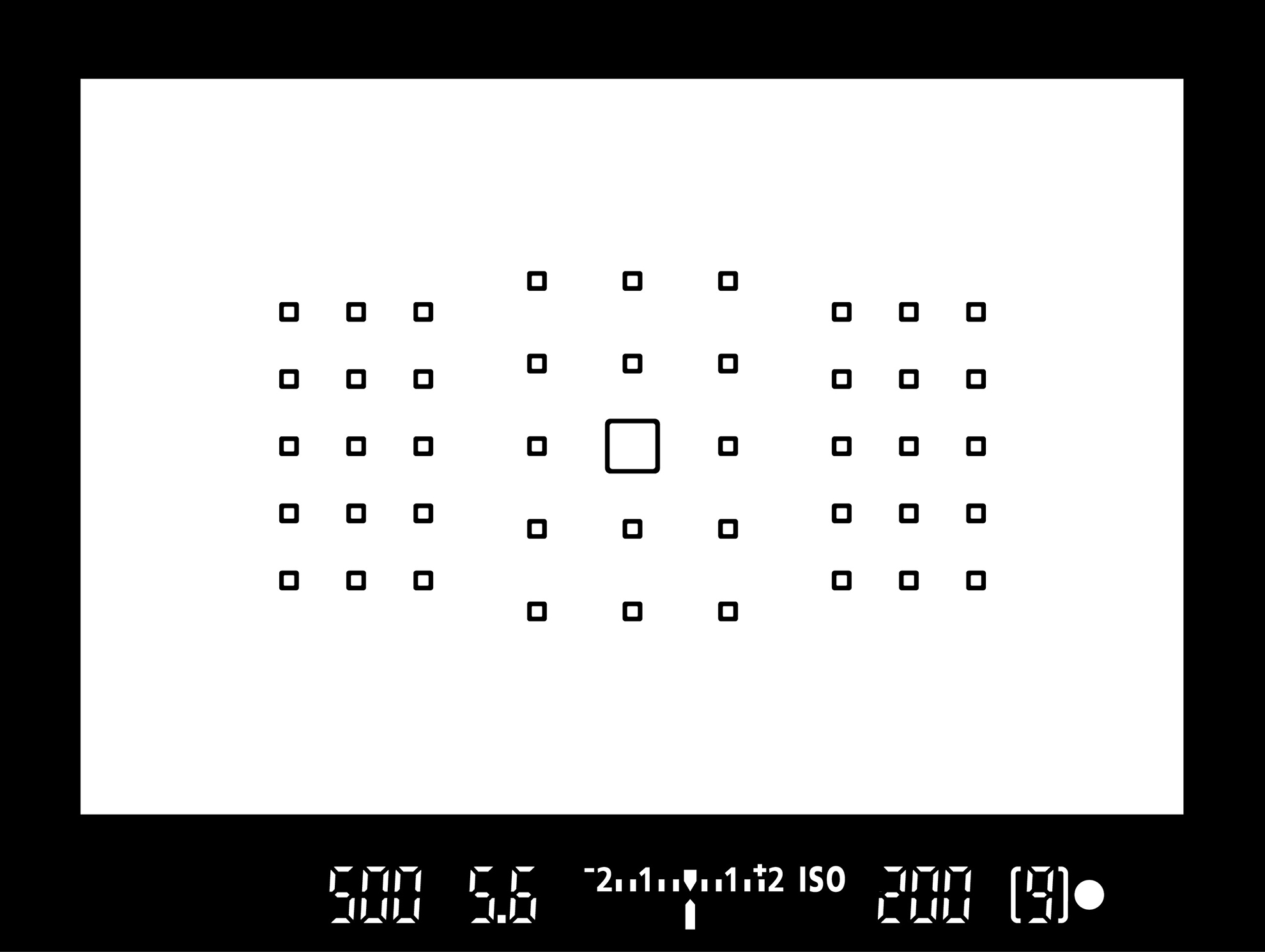 Cross-type AF technology has continued to develop in digital SLRs. With a camera like the EOS 77D, for example, it’s possible to have each of its 45 AF points — not just the one(s) in the center area — act as a cross-type point, depending upon the lens being used. With cross-type coverage, AF is often more positive and accurate, and that’s especially useful when you are using AF points away from the center.

There are big advantages in AF performance for critical photographers who take advantage of the AF provided when looking through the viewfinder, with a modern DSLR with cross-type AF points.  Their ability to work at low light levels, to respond quickly to so many different types of subject detail, and to continually update AF and drive focus in telephoto lenses up to and above 800mm, continues to make the digital SLR a primary choice for critical users.  The advent of cross-type AF points has been an important development in SLR cameras, across the industry, and Canon’s implementation of this technology has continued to develop, up to and including the EOS 7D Mark II camera, with 65 AF points which can all perform as true cross-type points with many Canon EF or EF-S lenses attached.