Canon’s EOS 77D positions itself as a compact camera for the serious enthusiast, especially if cost or size/weight are priorities. Among the areas where it proves itself well are the camera’s video features, which make it a very cost-effective answer for single-operator, multi-media content creation. We’ll outline some of the noteworthy features in this article.

EOS 77D shoots video at resolutions up to 1080p Full HD, and at frames per second rates up to 60p (50p if it’s set for PAL operation). Bit rates are approximately 60 Mbps, at the 59.94 fps setting, and MP4 video files are written to the camera’s SD memory cards using Canon’s IPB type file compression. SD cards rated at Speed Class 10 or higher can be used for HD video recording in the EOS 77D.

This is clearly one of the video creation highlights of the EOS 77D. Each and every pixel on the imaging sensor can read and contribute to smooth and effective AF during video recording with the Dual Pixel CMOS AF technology. Actual focusing takes place over an area roughly 80% of the horizontal and vertical dimension of the 16:9 area of the image sensor during video recording.

When the camera is set for video, a quick trip to the 4th Shooting Menu screen (red area of the menu) gives users the choice of having the 77D’s continuous Movie Servo AF active, or disabled to allow locking focus on stationary subjects. Movie Servo AF is notable because it’s not just continuous focus, allowing focus on many moving subjects, but it’s tuned for the smooth near-to-far focus transitions usually desired in video recording. Be aware that unlike Canon’s higher-end cameras, the EOS 77D does not have separate menu control to speed up or slow down Movie Servo AF from its factory default settings. 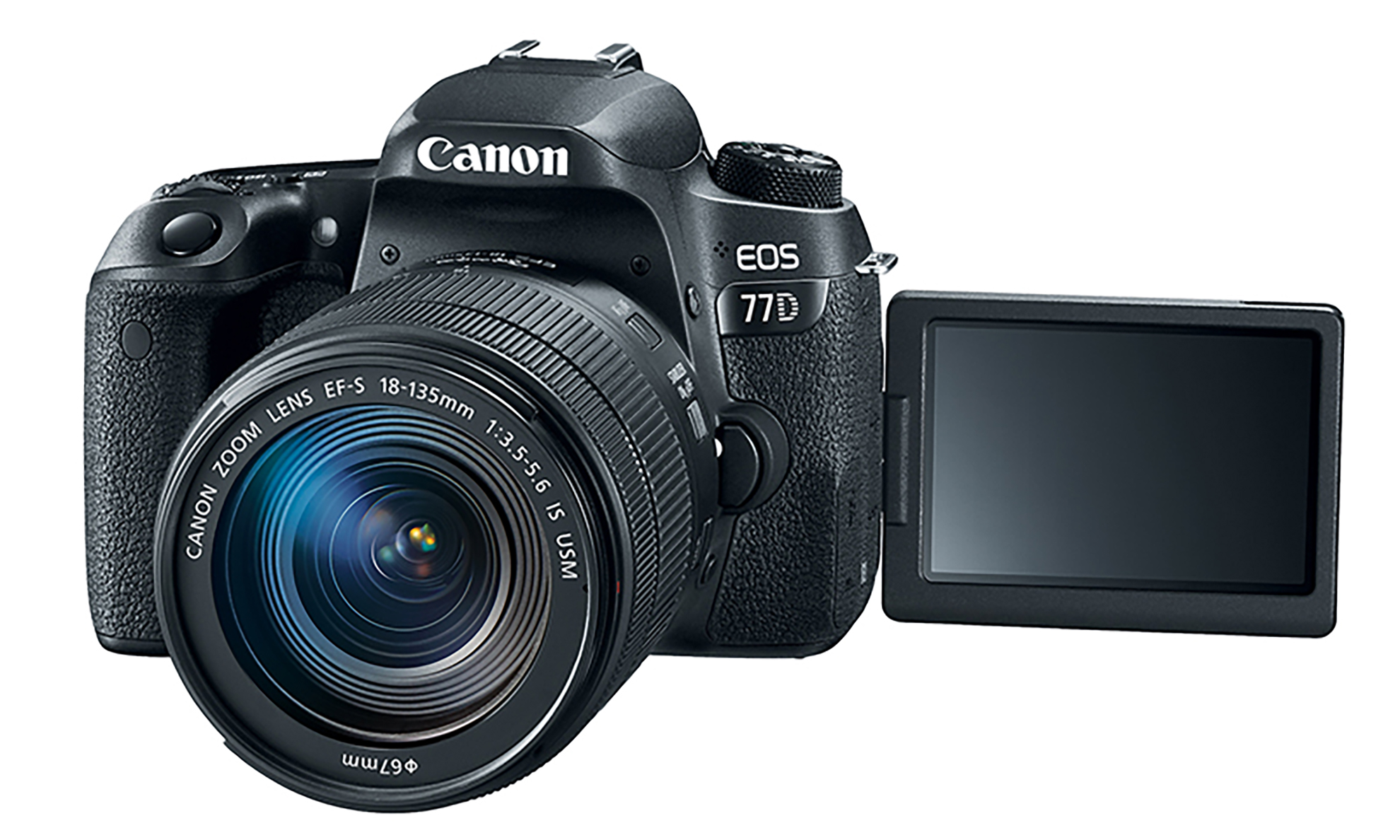 And the separate AF Method command — which can be accessed either with icons on the touchscreen LCD monitor, or in the afore-mentioned Menu — lets users define the area used for AF. The three possible settings are:

Focus takes place over a broad area of the video image, with face detection active. If human faces are detected, the camera will concentrate focus on the most prominent face in the scene. In scenes without faces, it will automatically focus on the nearest detailed subject in the scene. With the touchscreen interface, just tap the screen to put sharpest focus elsewhere, even on the background if you want.

A smaller zone of AF sensors starts at the center of the image area, but you’re free to move it by just tapping or dragging the larger rectangle where you want over most of the total picture area. Focus takes place within the zone, again usually on the nearest detailed subject that’s within the big white on-screen icon.

Especially of interest to critical users, this uses a single focus point on the LCD monitor for focus. With the touchscreen interface, this can be re-positioned anywhere within an area roughly 80% of the horizontal width and vertical height of the total video image area, by just tapping or dragging the small AF icon.

The EOS 77D certainly isn’t the first Canon camera to use Dual Pixel CMOS technology for video and Live View AF, but it has now expanded into an even more affordable digital SLR camera in the EOS line. Dual Pixel CMOS AF can transform the entire DSLR shooting experience, making autofocus a practical and realistic option for many users, during actual video recording. And, it’s especially smooth and positive when coupled with Canon lenses using either the STM (Stepping Motor) focus drive system, or the recently-introduced Nano USM focus motors.

Canon has had optical Image Stabilization in select lenses for some time now (the first IS lens was introduced in 1995!), but this was always intended as correction for the type of typical high-frequency “hand shake” movements users experience shooting hand-held, still images. With the growth of video recording, and the “reality TV” look of camera operators shooting while walking or even running after a subject, a new stabilization to correct the bigger up/down, left/right camera movements was needed. Movie Digital IS is Canon’s answer.

There are two degrees of Movie Digital IS possible, in addition to its OFF setting:

A modest amount of electronic stabilization is applied at the CMOS imaging sensor, in addition to any IS the camera’s lens may have (if any).

Stronger stabilization occurs, and this setting may be desirable in situations where the operator knows he or she may be walking or jogging to keep up with a moving subject, during actual video recording.

There is a crop factor that occurs whenever Movie Digital IS is active — the actual recorded area will be about 90% of the original Full HD area of the sensor when set to “Enable,” and about 70% of the original 16:9 area when set to “Enhanced.” What you see on the LCD monitor will be accurate. Just be aware that either Movie Digital IS setting will crop the image, to make room available on the sensor to move the image electronically in response to any shake that may be detected.

Finally, for technical reasons, be aware that there are some lenses that do not allow the Movie Digital IS feature to operate. These are all high-end, professional EF lenses:

Just set the camera’s Mode Dial to the “M” setting if you want full manual exposure control. Shutter speeds are then set with the top-mounted Main Dial, and apertures via the rear Quick Control Dial. During Manual exposure operation, ISO can be Automatic, or manually set by the user (ISO 100 thru 12,800 is possible with video).

High Dynamic Range video can be recorded in-camera. This can be a very effective means of reducing excessive highlight brightness when shooting in direct sunlight or other contrasty lighting conditions. It’s especially useful if you don’t have the time or resources to cope with excessive contrast during the video editing process.

This is another video feature that can be performed in-camera, without having to resort to complex video editing techniques in the computer. Time Lapse video is set in the red shooting menu area, when the camera’s main on-off video switch is set to video mode. When enabled, users have choice of intervals between each frame (from one second to 99 hours, 59 minutes, 59 seconds). On this menu, users can also define the number of individual video frames in the finished video, as well as whether automatic exposure is locked in at the same level for all frames as initially metered for the first frame, or to have each frame individually metered and adjusted.

This is possible using either the Canon infrared Remote Controller RC-6, or Canon’s new Bluetooth-enabled Wireless Remote Control BR-E1. Both are optional accessories, and not included with the EOS 77D.

EOS 77D is introduced as a compact yet feature-rich camera for still and video enthusiast users, and certainly has video performance to make it attractive even to experienced video shooters. But be aware of the following limitations in the 77D:

The inclusion of Canon’s Dual Pixel CMOS AF technology in the EOS 77D would be enough of a reason for many users to put it on their short-list of DSLR cameras for video recording. But some of the other additions, like the in-camera Movie Digital IS and HDR video recording modes, underscore its potential attractiveness to the individual video content creator. This camera is light, has a very flexible LCD monitor, and a great touchscreen interface to go along with these features.

While there are certainly more advanced answers in the Canon EOS system, Canon is hopeful that both still and video users will consider the EOS 77D — particularly if smooth and convenient operation, in a compact form-factor, is high on your wish list.