Today’s digital SLR cameras usually have two distinct Autofocus systems — what we now think of as traditional AF you get through the optical viewfinder; and (usually) a separate AF system for focus using the LCD monitor to view your scene, when shooting with Live View or recording video.  They’re very different:

We’ll discuss the many advantages that traditional through-the-viewfinder AF systems offer in this series of AF articles.  But before we dive in, it may be helpful to have a quick understanding of how AF has typically worked in our SLR cameras since these systems were introduced back in the mid-1980s.

With the vast majority of SLR cameras offering autofocus, whether film or digital, a separate and completely independent sensor is placed in the camera body — usually beneath the mirror box, in front of the film plane.  With the camera’s reflex mirror in its normal down position, some light goes through a semi-transparent area in the middle of this main mirror, and is reflected by a smaller, secondary mirror downward, toward a very sophisticated and precise set of optics which split the incoming light into two distinct and sharply focused rays.  These are then focused upon a sensor with rows of light-sensitive pixels.  (This definitely is not the imaging sensor; it’s the AF sensor). 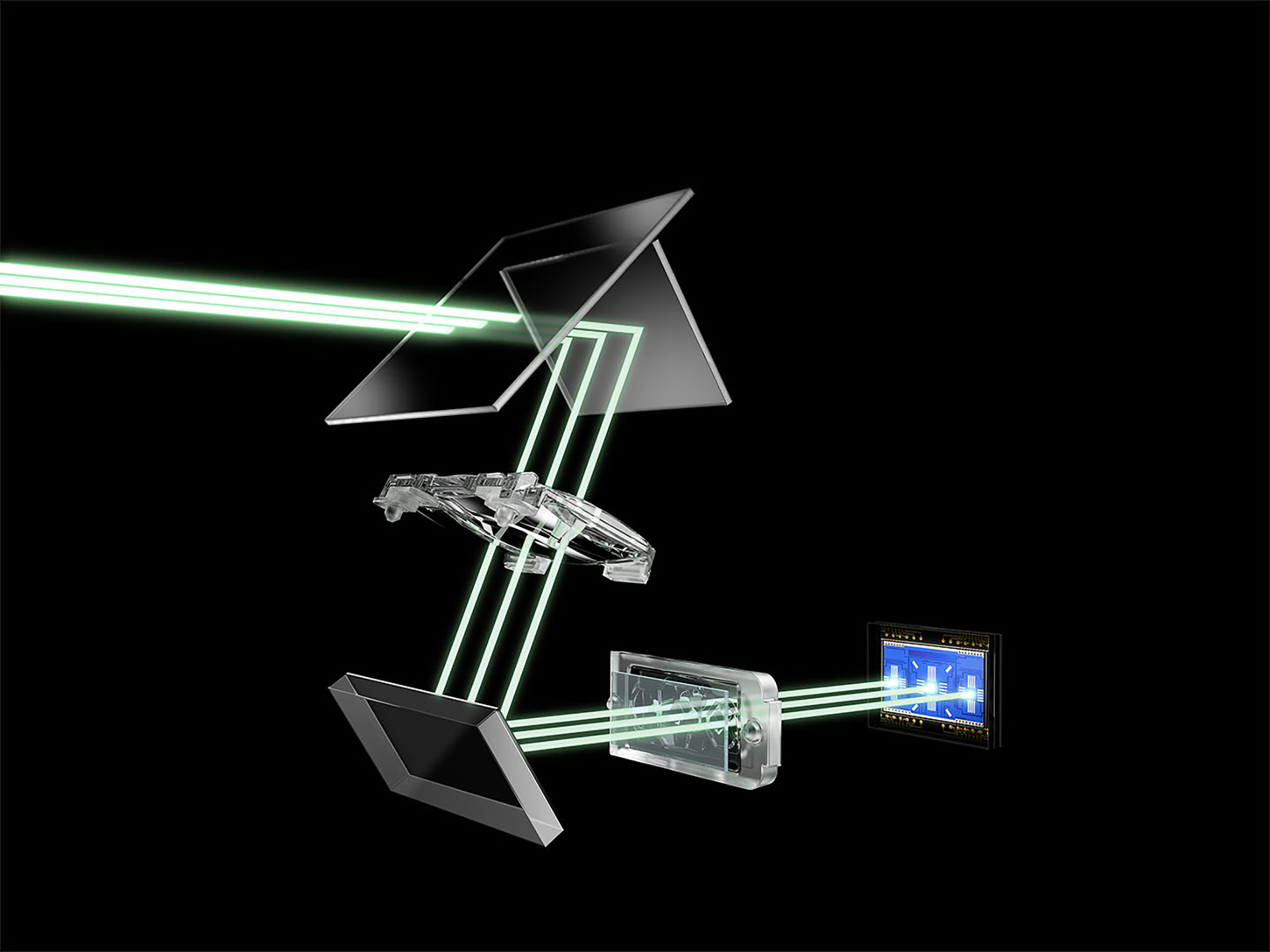 Here’s the basic layout used in today’s digital SLRs for autofocus. The green rays simulate light coming through the camera lens. The main mirror in a DSLR is semi-transparent, and some of this light passes through the mirror, and is reflected downward in the camera. It ultimately ends up as pairs of sharply-focused rays of light, hitting the extremely precisely-positioned AF sensor.

How can an AF sensor tell when an image is in-focus?  Every line of pixels is actually a pair of lines, arranged in the same direction.  We just mentioned that incoming light is split into two separate and sharply-focused beams, which shine upon these tiny rows of individual pixels. 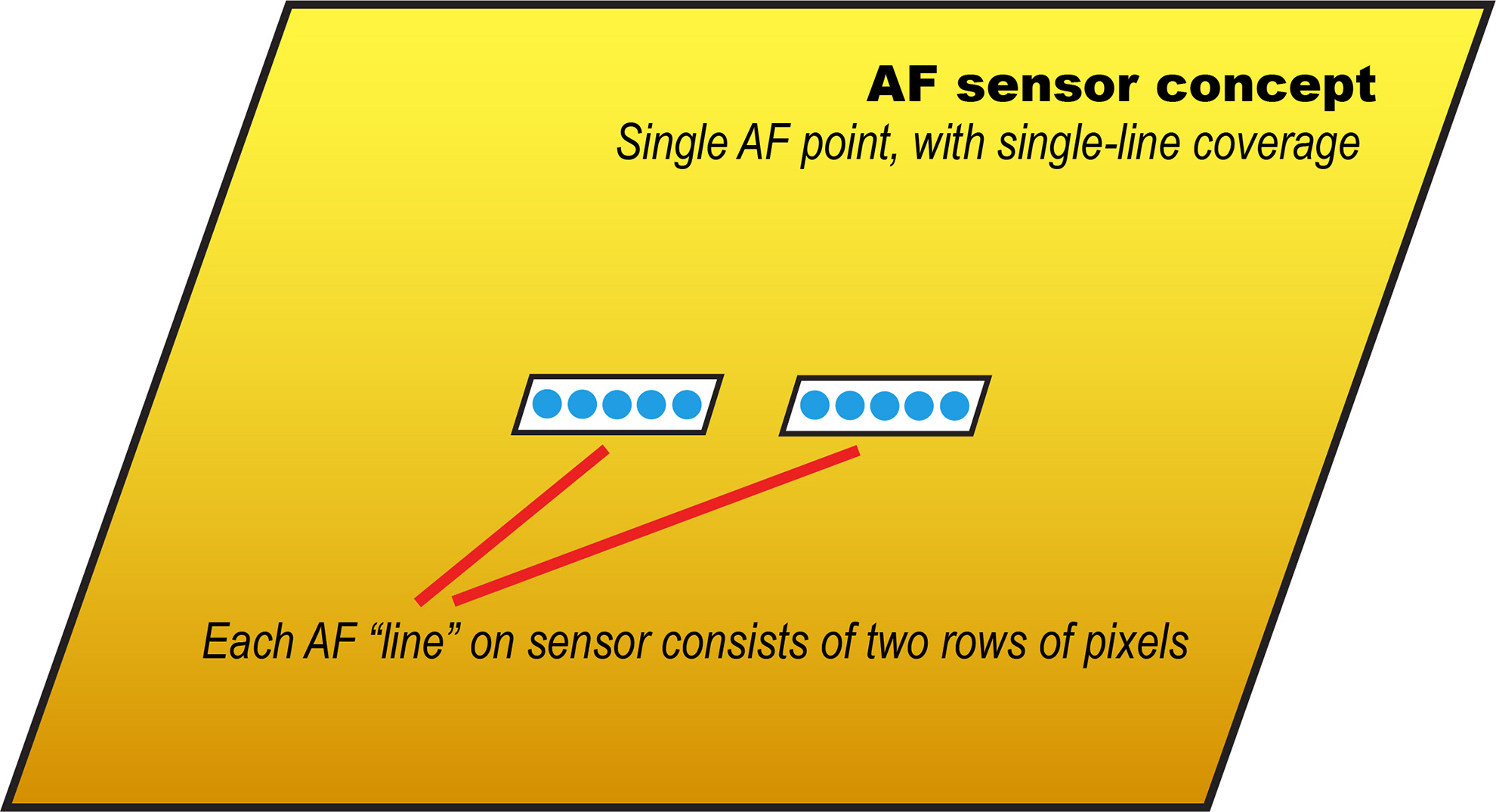 Phase-detection for autofocus is able to work because it can compare two incoming beams of light. In digital SLRs, a separate AF sensor is used for this. Unlike an imaging sensor, which has light-sensitive pixels covering its entire area, the AF sensor uses lines or rows of pixels. For each “line” used for focus detection, there are actually two lines on the AF sensor. A single incoming beam of light is precisely split in two, and focused upon each row, illuminating either the pixel at the center of each row, or pixels further inward or away.

Engineers discovered early-on a very interesting natural phenomenon of these light beams: when the camera lens is focused sharply at a given AF point, these beams would split evenly, and strike the pixel(s) in the middle of both rows on the AF sensor.  By reading-out each light-gathering pixel independently, when those known to be in the exact center register brightness, the AF system knows that the lens is now in-focus. 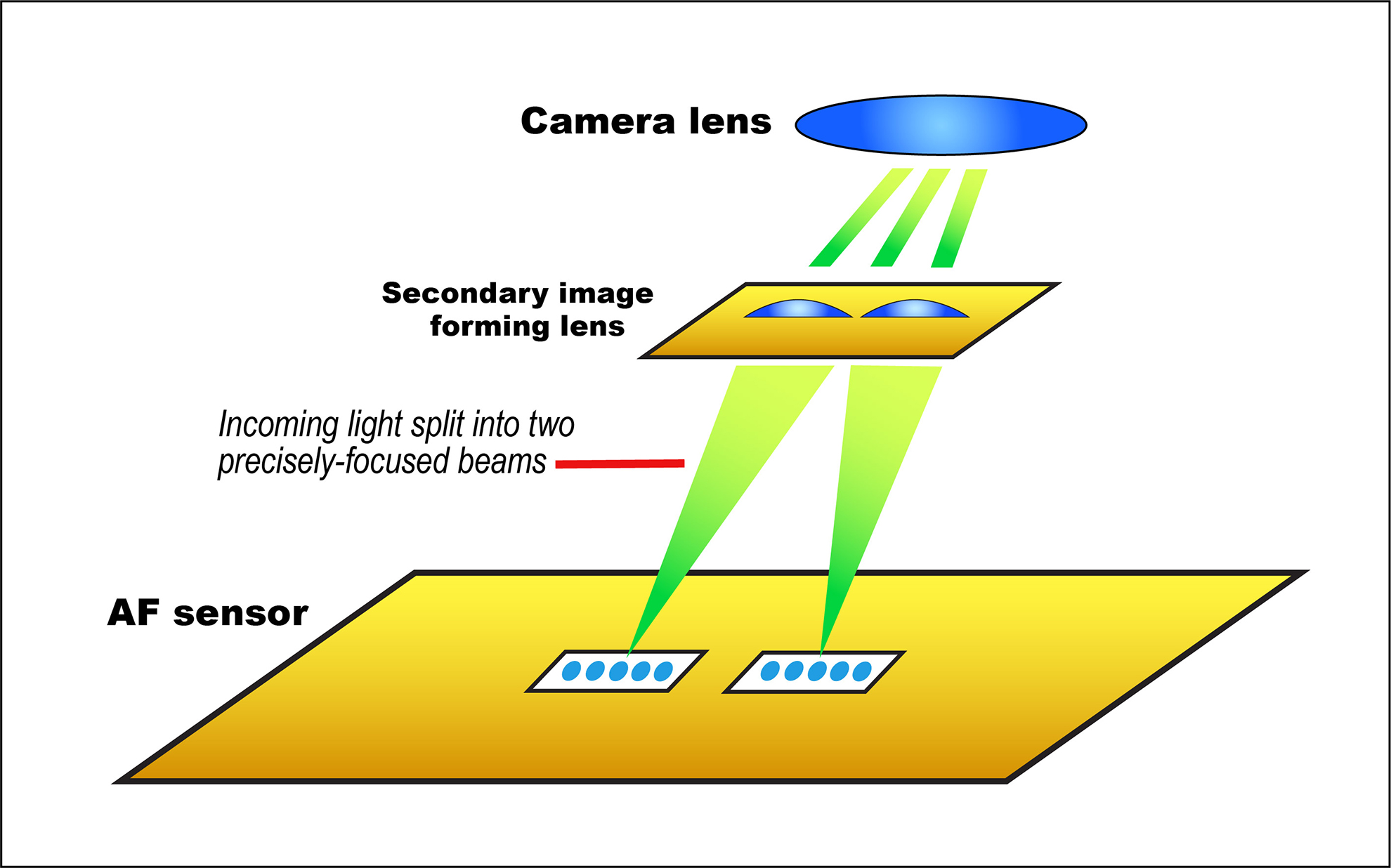 Incoming light from the camera lens passes into the very precise AF optical system. The secondary image forming lens splits this single “beam” of light into two separate and sharply-focused beams, which are aimed at the pair of rows of pixels on the imaging sensor. Which pixels they illuminate on the two rows immediately tells the AF system whether you’re sharply focused or not.

And, here’s the important thing about phase detect AF: when the camera’s lens is focused too close and AF is aimed at a subject, the beams of light move, in tandem, closer together.  The pixels on the pair of line sensors toward the inside register light hitting them, and the camera instantly knows two things: not only that the lens isn’t in focus, but that to achieve focus, the lens has to be driven further away, in the direction of “infinity.”

Likewise, if the two beams of light spread further apart, and strike a pixel on each row that’s away from center, the AF sensor knows instantly that the lens is focused too far, and that focus must be driven closer.  As the lens is being focused, the position of these two beams of incoming light hitting the AF sensor continue to be registered, and when they strike the dead-center of each row of pixels, AF stops.  The lens is focused on the subject it’s being aimed at. 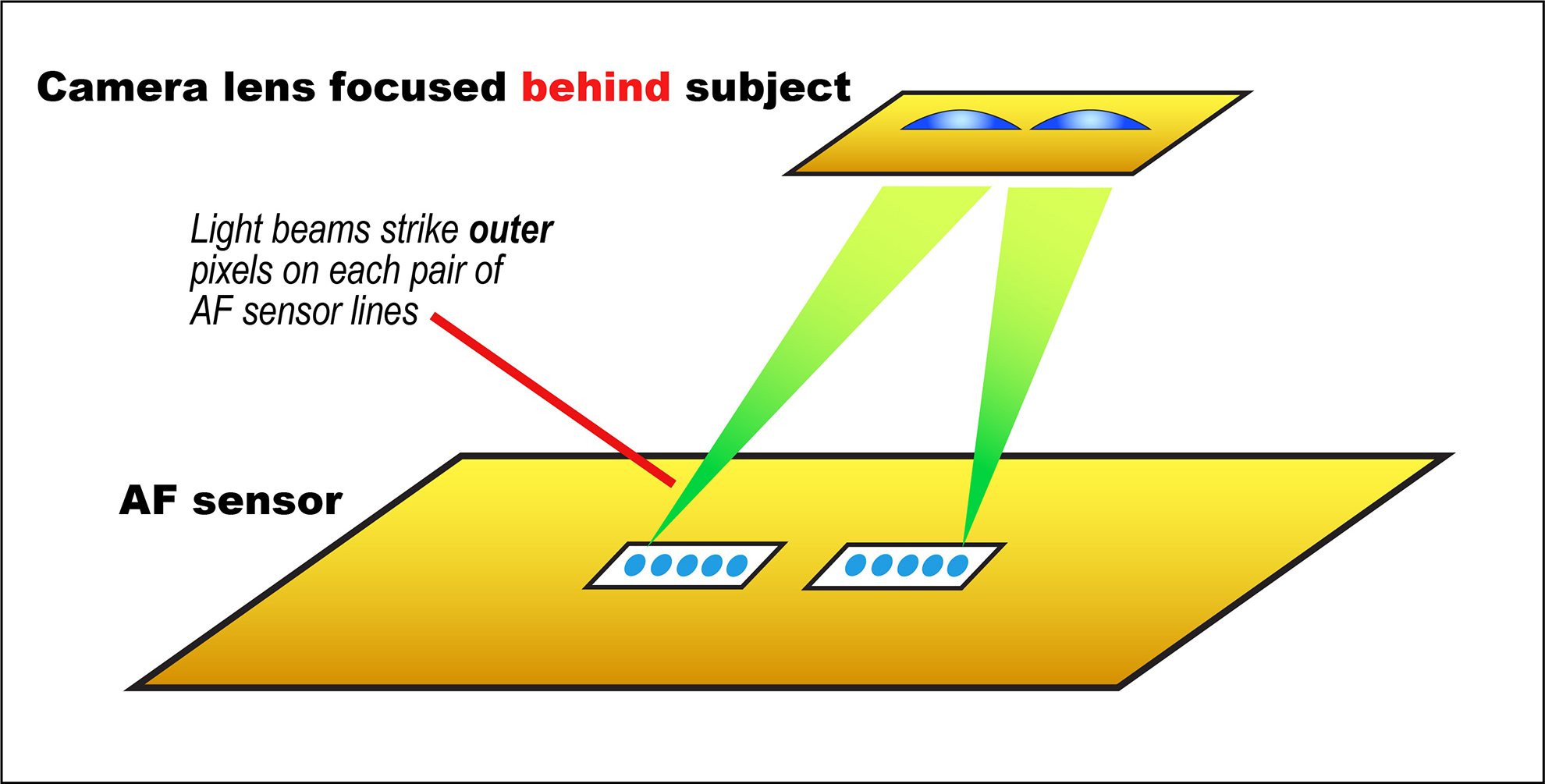 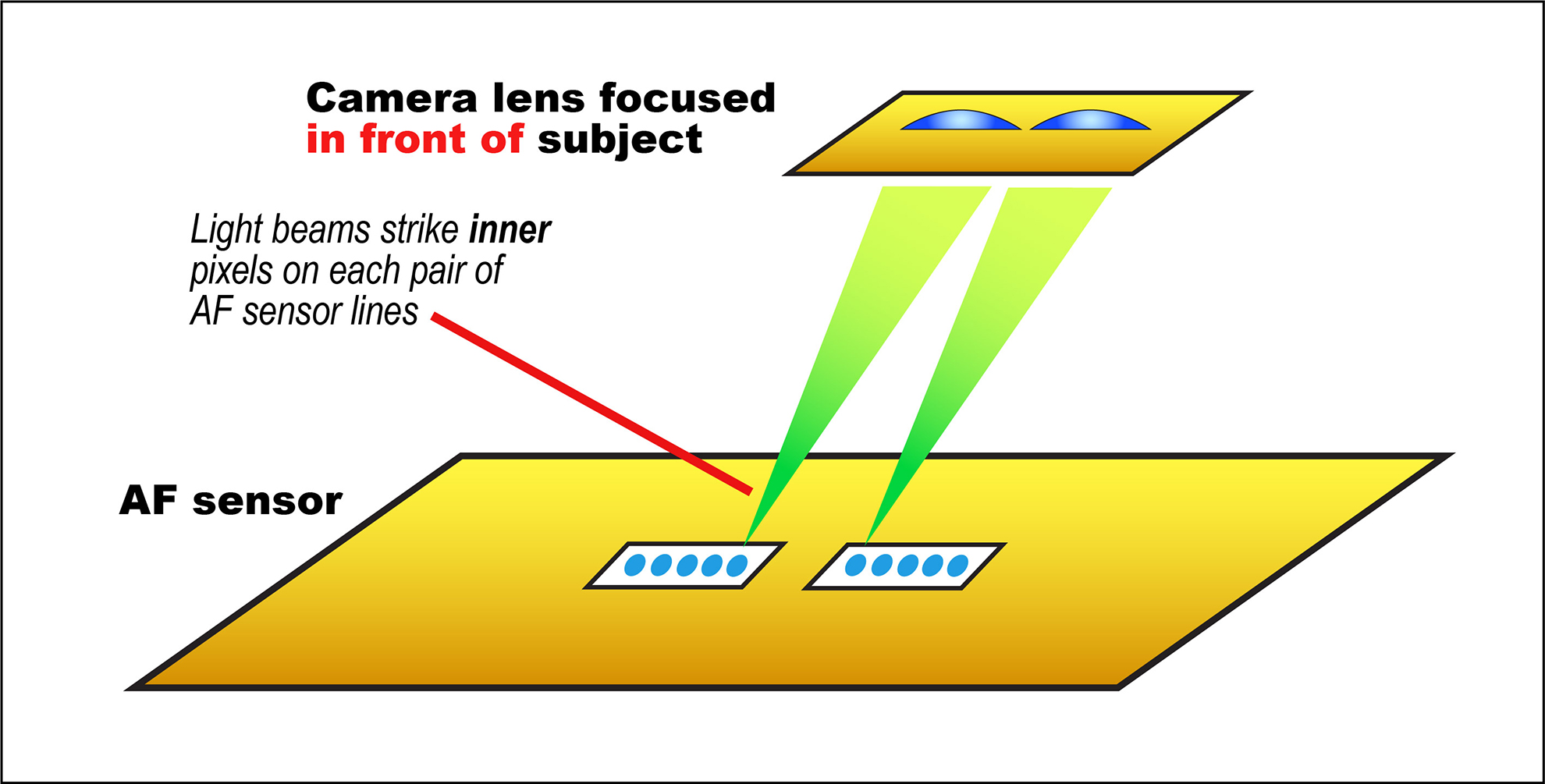 Each pixel on the pair of light-sensitive lines on the AF sensor can individually detect when it’s being hit by incoming light. When the main camera lens is not properly focused, the two incoming beams of light either spread wider, or move closer together. Focused behind the subject? The two beams spread farther, each illuminating a pixel away from the center — and instantly telling the AF system that the lens needs to be driven to a closer focus distance. And, the system can calculate immediately how far to drive the lens, too, based on which pair of pixels (one per line sensor) is initially hit by light. When the center pixel on each row is struck by light, the AF system knows it’s seeing sharp focus at whatever that AF point is being aimed at.

What’s the benefit of this traditional, phase-detect AF?

Even with the advance of different AF systems that can read focus during Live View off the imaging sensor, traditional “through the viewfinder” phase-detect AF systems have some powerful advantages for today’s digital photographers working with SLR cameras.  While exact performance specs and features can and do vary from one camera model to the next, here are some important benefits that the modern DSLR often provides with its viewfinder AF: 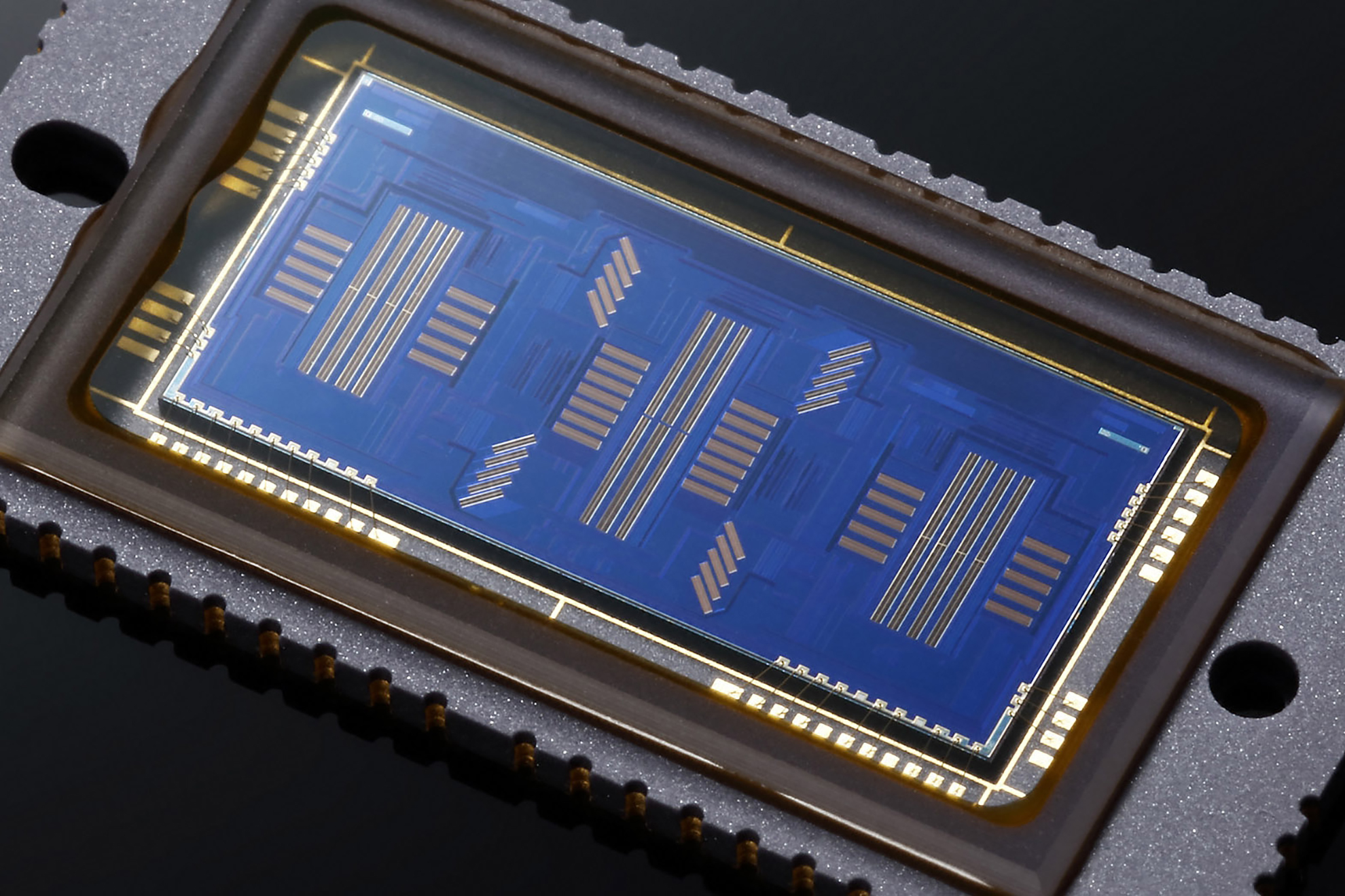 Phase-detection AF systems for digital SLRs have certainly evolved over the years. Compare the conceptual illustration of a single pair of rows of pixels (above), depicting an early AF sensor with one AF point, to this image of the AF sensor on today’s EOS-1D X Mark II, which has 61 AF points — most of which offer cross-type coverage.

And, ability for different AF points on the AF sensor to provide “cross-type” AF coverage, for even better recognition and focus on many hard-to-focus subjects.  This will be the subject of our next article.