The first thing that almost every interested person who picks up an EOS-1D X Mark II will notice happens when you bring your eye to the viewfinder, and press the shutter button half-way down. The 61 selectable AF points appear with full-time, red illumination. No matter what the lighting condition — bright sunlight or total darkness — the AF points in the viewfinder of this camera are always illuminated. Simply stated, unlike the previous-generation EOS-1D X, or other models like the EOS 5D Mark III and so on, AF points never appear via black LCD outlines. 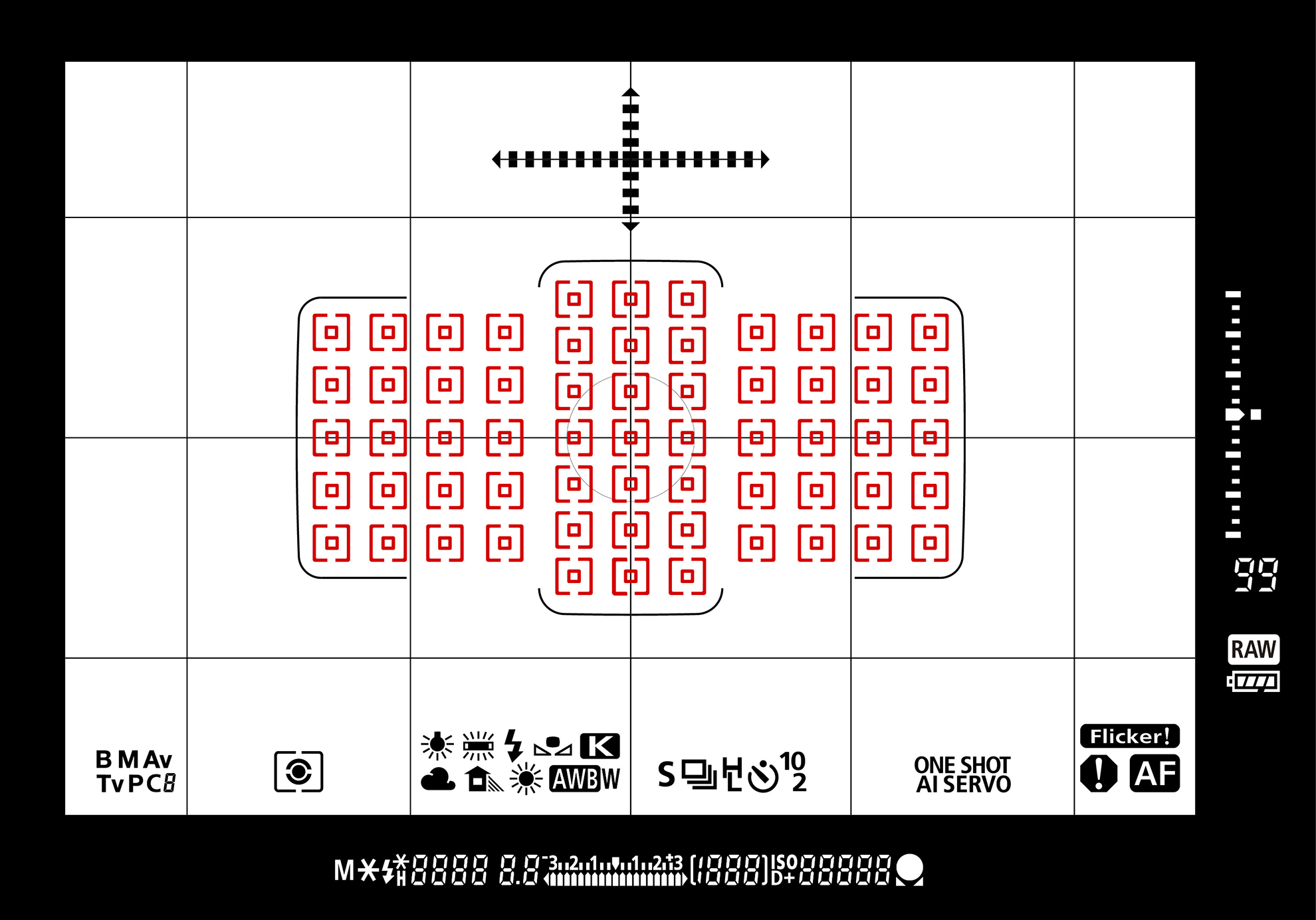 For some Canon shooters, one of the biggest changes on the EOS-1D X Mark II is the viewfinder’s ability to display AF points with full-time, red illumination. This graphic displays all the potential shooting info that can appear in the camera’s viewfinder; users can control very precisely what is visible during shooting. Please note that during normal shooting, you’d never see ALL this information simultaneously!

By re-engineering the AF display system — more on that in a moment — the EOS-1D X Mark II changes how a photographer can work with the AF system in low-light situations. Responding to feedback from many of our professional customers, Canon engineers have blessed this camera with the ability to always see the active AF point, even in the darkest of ambient-light conditions, or against dark-colored subjects.

Whichever is set, the camera will further automatically adjust the relative brightness on top of the user-defined setting, changing it subtly depending upon the ambient light at the moment. Users can see, if they look at the red illumination closely, that as they pan from a dark to light area, or vice-versa, that the brightness of the AF points will shift on its own, getting slightly brighter as ambient light levels rise. This helps ensure that the AF point display will continue to be visible in as many conditions as possible.

Again, this is full-time red illumination of the AF points — whether you’re changing the location of an AF point, changing AF Area (the size of an AF point, or cluster of AF points), or simply shooting pictures and using the 61-point AF system. As stated above, AF points never appear as black outlines on the EOS-1D X Mark II focus screen.

The EOS-1D X Mark II presents a lot of potential information in the viewfinder aside from the 61 AF points, and this continues to be displayed using black, liquid crystal technology. The camera gives a great deal of flexibility over what is displayed at any given time, so users are free to customize the display to suit their needs and preferences. Since this article is highlighting the change-over to red illumination of the AF points, we won’t go into great detail here, but we want to be sure that those interested in the EOS-1D X Mark II are aware of a few things: 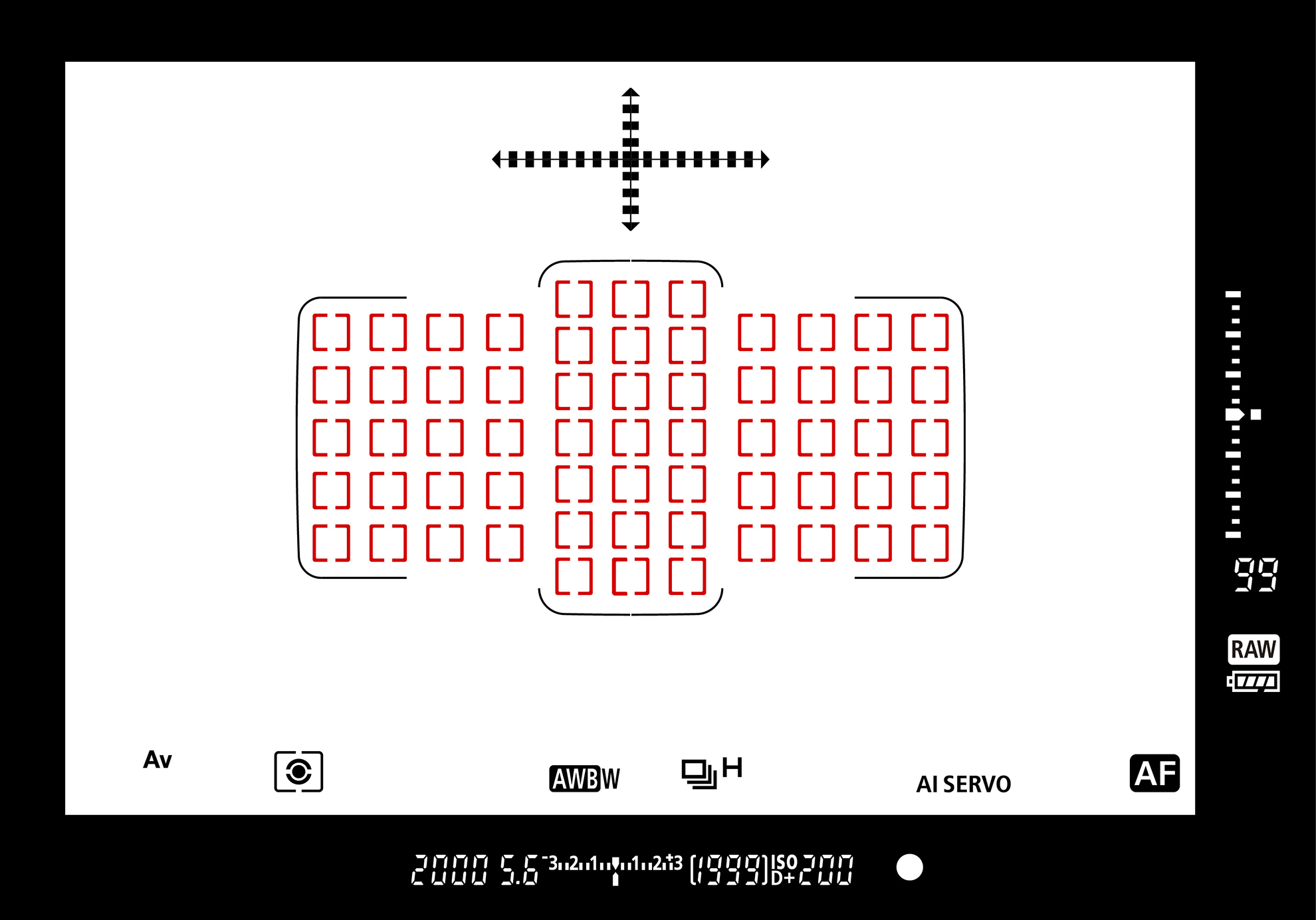 You wouldn’t see all 61 AF points appear at the same time this way, but here’s an example of what you might otherwise see in terms of other viewfinder information, during actual outdoor shooting. This example includes the dual axis electronic level display (upper-center), the thin brackets around the focus points, indicating Automatic AF Point Selection is active, and shooting information (first time on an EOS-1 series camera) toward the bottom of the picture area. Again, a key point is that ONLY the AF points will be illuminated, regardless of the ambient lighting.

This info isn’t entirely new, since it follows what was possible with the previous-generation EOS-1D X, as well as cameras like the EOS 5DS series and EOS 5D Mark III. But it’s still noteworthy, both for users who aren’t familiar with these models, as well as to review that the AF point displays will always appear illuminated in red.

Like the other EOS models mentioned directly above, the EOS-1D X Mark II allows the shooter to control how the AF points appear in the viewfinder during shooting. Here are the possibilities — all of which are in the 5th AF menu screen, under “AF point display during focus”: 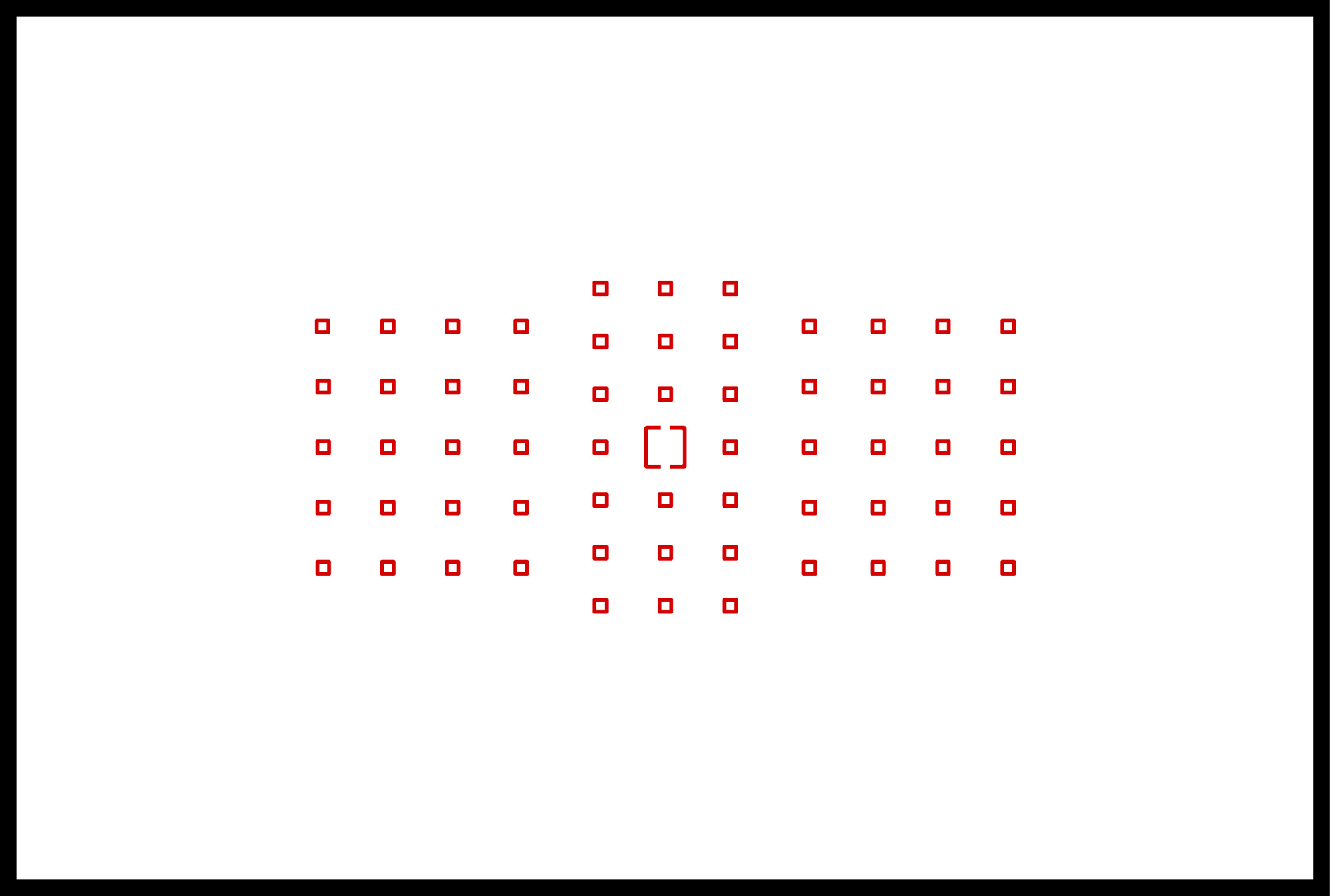 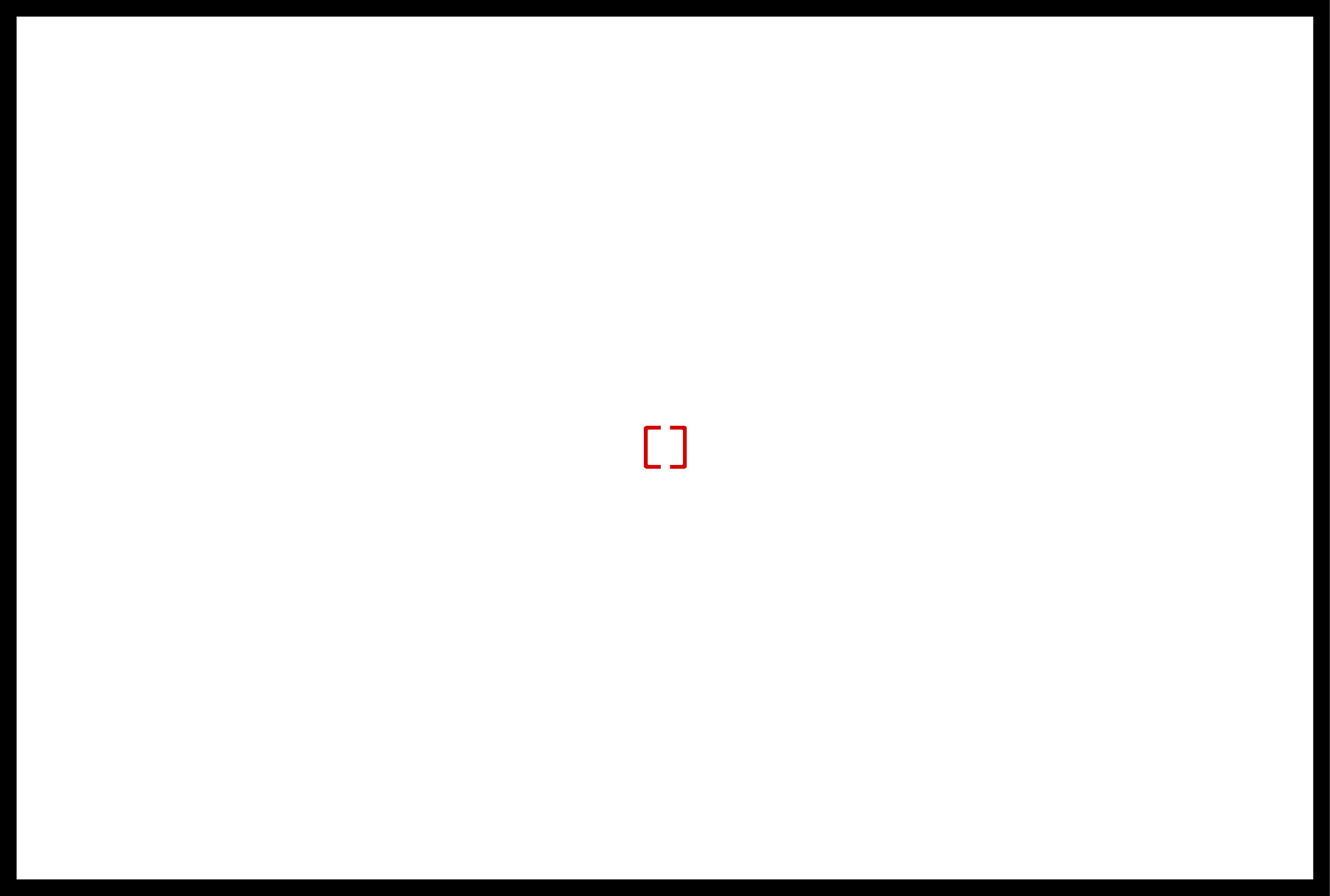 All AF Points (left):
the location of every AF point is indicated in the viewfinder by a smaller AF point icon; the point(s) selected by the user are displayed larger on-screen, so they’re easy to distinguish. This can be very useful to photographers who frequently like to move AF points as they shoot.

Selected AF Point (right):
only the AF points, or cluster of AF points (if you’ve expanded AF point size) is visible… before, during, and after focusing and shooting.

Other display options, to minimize what appears in viewfinder

What changed on the EOS-1D X Mark II?

The entire AF point illumination optical system for the viewfinder on the EOS-1D Mark II has changed, compared to the previous EOS-1D X. Red LEDs project focused light through a tiny patterned LCD panel, which has the pattern for all 61 AF points on it. Light passing through this is then superimposed via a sophisticated prism network, adjacent to the main viewfinder prism, and becomes visible through the eyepiece.

A system with red LEDs for illumination, precise optics, a flat LCD with AF points arrayed, and prisms to reflect this to the eyepiece are what makes the full-time red AF point illumination possible in the EOS-1D X Mark II. Prior to this, a layer of transparent LCD above the focus screen was illuminated from its side by a set of tiny red LEDs… this allowed brief illumination of whatever LCD elements were active, but for technical reasons, could not be illuminated for any length of time during shooting.

With this projected system, AF point info is always lighted in the viewfinder (as previously mentioned), and yet never interferes with exposure metering.

Full-time, illuminated AF points in the EOS-1D X Mark II’s viewfinder is a feature we’re confident many low-light shooters will really enjoy, and for some shooters, this may be one of the camera’s highlight features. The viewfinder remains extremely functional and customizable, and the red illumination can be adjusted for overall brightness by the photographer.

The EOS-1D X Mark II’s AF system is a tremendously powerful tool in the camera’s arsenal, and it begins with what the photographer first sees when he or she brings their eye up to the viewfinder. Canon is confident that the display of AF points will be the first of many aspects of this AF system that critical photographers will enjoy and rely on.