Canon bodies and lenses on tripods

Supporting Your Camera...With a Tripod

By: Dave Henry and Ken Sklute

Many photographers use their tripods reluctantly. In the case of the upcoming total eclipse of the sun in August, it’s a must.

The eclipse is almost 2½ hours long and your arms will be exhausted if you don’t use one. Plus, your images will be sharper because most photographers will be using very long focal lengths to make large sun disk sizes.

Tripods come in many sizes and a couple of different leg materials.  If you already own a sufficiently strong tripod, it doesn’t matter if your tripod legs are made of aluminum or carbon fiber because you won’t be hiking with it during the eclipse.

If you don’t own a tripod and you plan to invest in one now, that’s different. Now you’ll need to consider everything else you’ll be shooting over the coming years. And remember, a good, professional-grade tripod can literally last a lifetime.

If you’re into hiking and traveling, then you’ll probably consider a lighter weight carbon fiber model. You may even want to consider a tripod with four-section legs (versus a three-leg tripod) – four-leg section tripods fold up smaller and fit in suitcases easier and are often the same height as three-leg tripods when fully extended.

If you’re mostly shooting in a studio or location shooting without a lot of walking, then either will work.

The height of the tripod is another consideration. You’ll want a tripod that will at least come up to eye-level, without fully extending the center column, because your lens will be pointing almost straight up and you won’t want to hunch for over two hours to see your LCD screen. Another option: Bring a lawn chair to sit on during the eclipse, and lower the tripod to your sitting eye-level position (the added benefit here is that your tripod is much more stable since it’s not fully extended).

More important than the type of legs you buy, it’s the tripod head that counts. And there are special considerations for the 2017 solar eclipse.

Unlike typical photography, you won’t be aiming your camera and lens more-or-less straight ahead. This is a midday event in most of North America, and you will be aimed almost straight up to photograph the sun during this eclipse. That’s not something many tripod heads are designed to do, let alone with a large super-telephoto lens mounted.

As mentioned, the eclipse can last as long as a football or baseball game, and will require you to be attentive every minute – because most tripod heads will require you to continually reposition the sun in the frame due to the rotation of the earth. Depending on the magnification of the sun disk, your camera and lens will need constant repositioning in order to keep the sun centered in the frame. At telephoto magnifications, the sun will drift one sun diameter every two minutes.

There are numerous head types. A couple are more useful for eclipse photography than the others, but you’ll also want to consider its after-eclipse life. 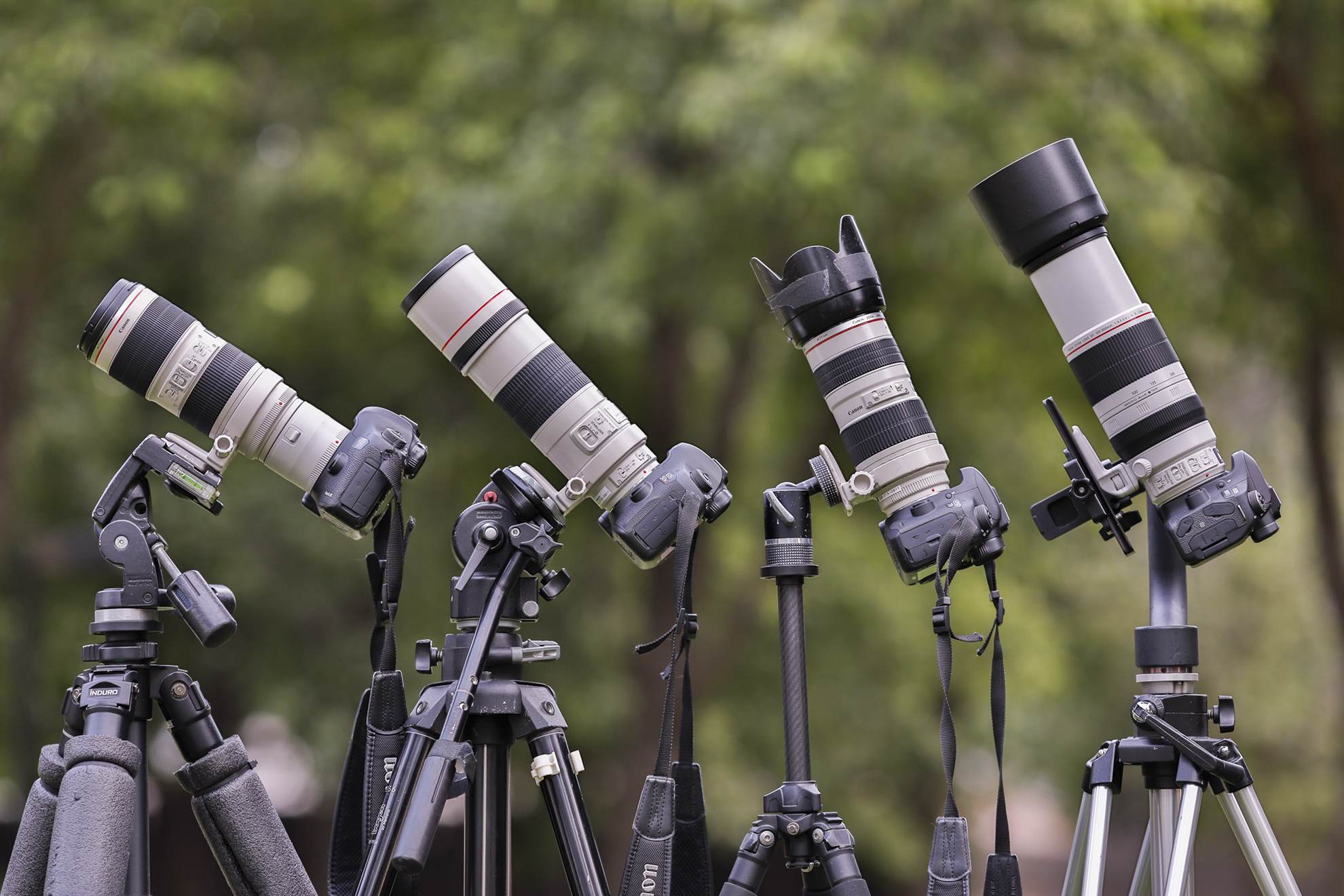 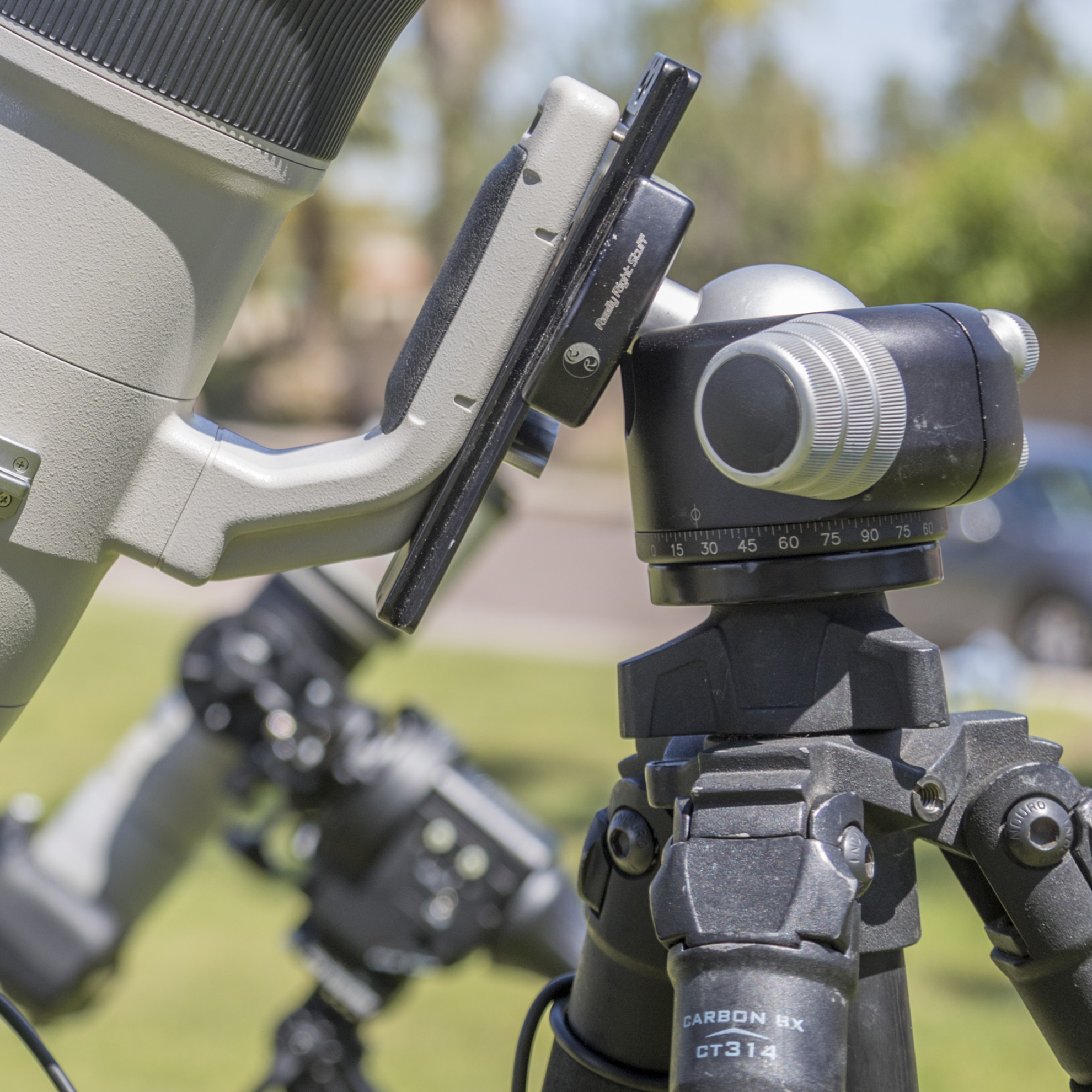 Ball and Socket Head: The ball and socket head is the most versatile for general photography and will give you the greatest flexibility in pointing your lens almost straight up to photograph the eclipse. Remember, for most of the USA, the eclipse is a midday event. 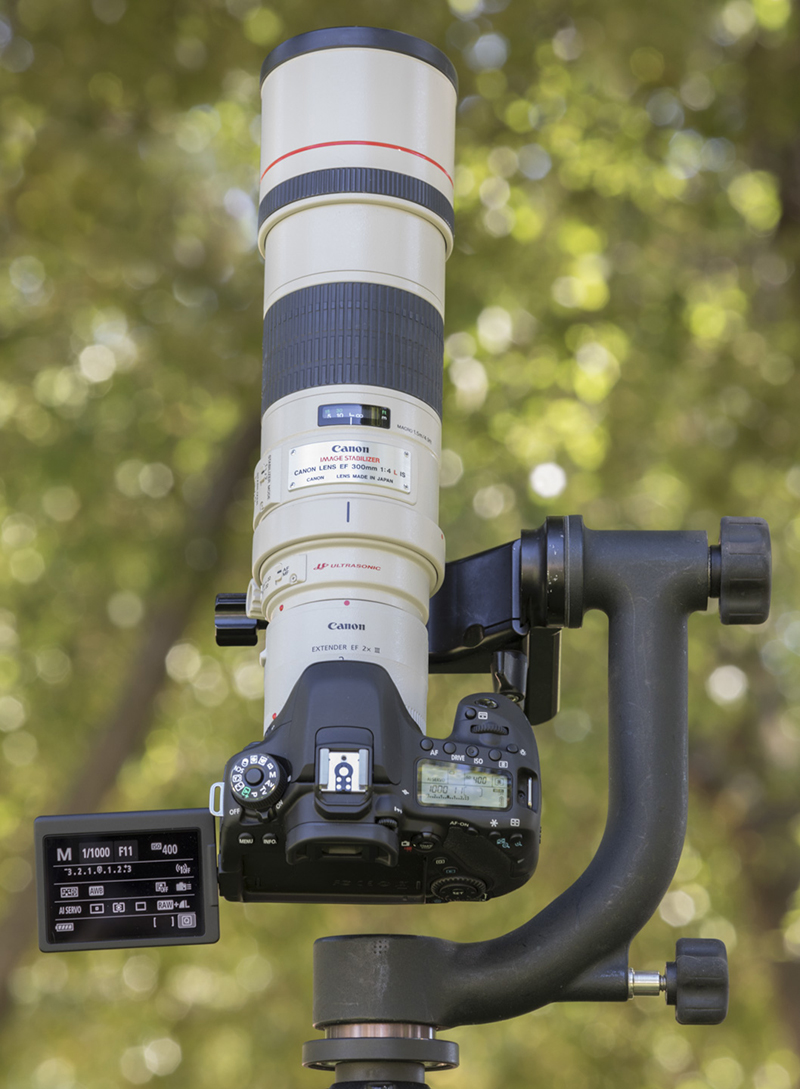 Gimbal Head: If you’re into wildlife and bird photography and you don’t have a tripod yet, you should consider the gimbal style head. It is very fast and flexible, but you will need to take precautions when mounting your lens on it, especially if you’re using a big white Canon L series lens for the eclipse. If you mount the lens with the vertical slider all the way down, the lens won’t be able to tilt up high enough to see the eclipse. Adjust the vertical slider at least halfway up and you’ll be able to angle the lens high enough to see the sun.

Video Head: The video tripod head may or may not be able to tilt back enough to allow you to point the lens straight up.

Three-Way Head: The three-way head, if used as designed, is probably the least useful for eclipse photography because most of them won’t allow you to tilt the camera back enough to include the sun. If you plan to use your existing one, consider using it backwards by having the “pitch” arm in front instead of pointing back towards you. It will be a bit awkward but will get the job done. The three-way head is superior to all other heads if you plan to do a lot of technical photography such as architectural photography with tilt-shift lenses. Three-way heads allow for minute adjustments in one plane without disturbing the other two planes.

A recent industry development is geared, electrical equatorial-type mounts (normally used on telescopes) that are re-designed to replace conventional tripod heads, and be used with cameras.  If you research these, be sure to look for equatorial drive heads optimized for camera use, and engineered for the weight of the largest lens you’re likely to use on it.

If you plan to do a lot of astrophotography beyond the eclipse, you may consider investing in this type of specialty mount, such as the Sky-Watcher’s Star Adventurer. 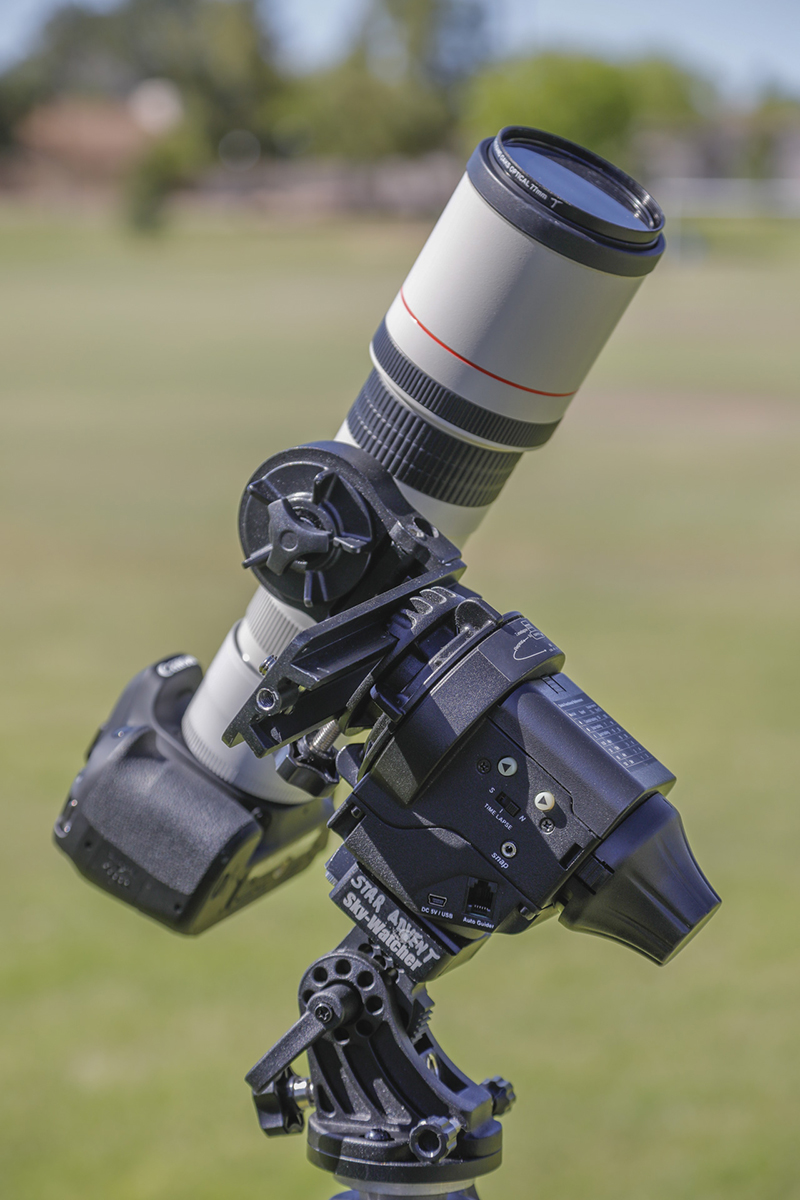 For star photographers, instead of doing 20 second star photos at the noisy ISO 6,400, how about a one-minute exposure at a much less noisy ISO 1,600 or two minutes at ISO 800? That’s a big deal.

Keeping the sun in the same spot in your frame is important and a camera-dedicated clock drive combined with your camera’s intervalometer capability means that you can shoot the entire eclipse almost hands-free. The only time you need to be at the camera is to remove and replace the solar filter during totality.

The benefit here is, this new head frees you up to attend to other cameras for different effects.

In order for the head to track the sun, moon or stars, it needs to be aligned with the North Star, Polaris. For solar use, this is done either the night before or a couple hours prior to sunrise when the sky is still black and Polaris is still visible.

One very important accessory is a tripod apron, sometimes referred to as a utility apron, tripod tray, or stone bag. It’s hung between the legs of the tripod and is used as a catch-all during shooting.

During totality, it’s a fast and convenient place to temporarily store the solar filter. Everything is happening so fast, you don’t want to be fumbling with your solar filter. It can also be used to hold plastic bags full of sand or rocks to weigh down the tripod, if the tray and its mounts are sufficiently strong. The additional weight helps to stabilize the tripod and makes it less susceptible to vibration in wind. 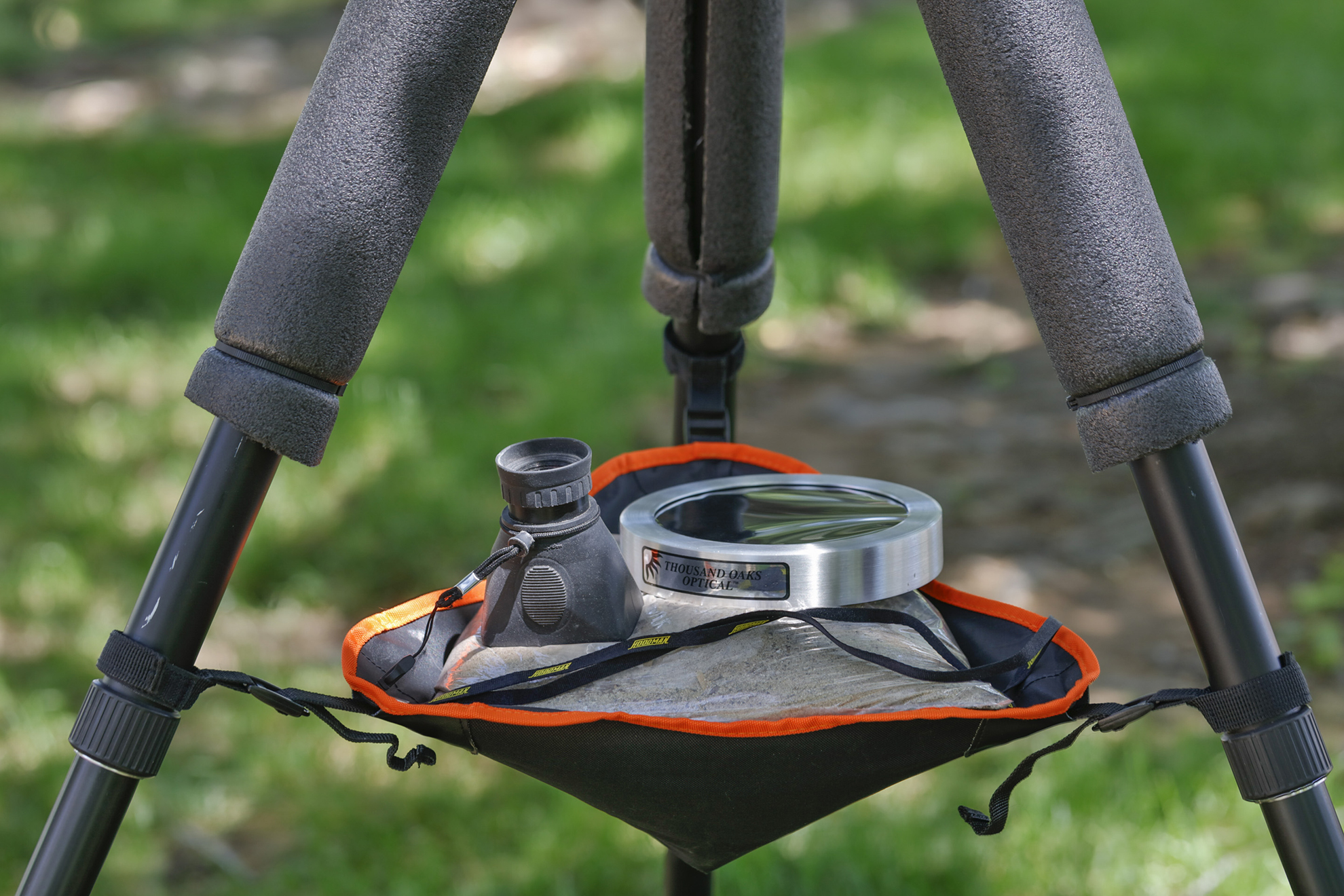 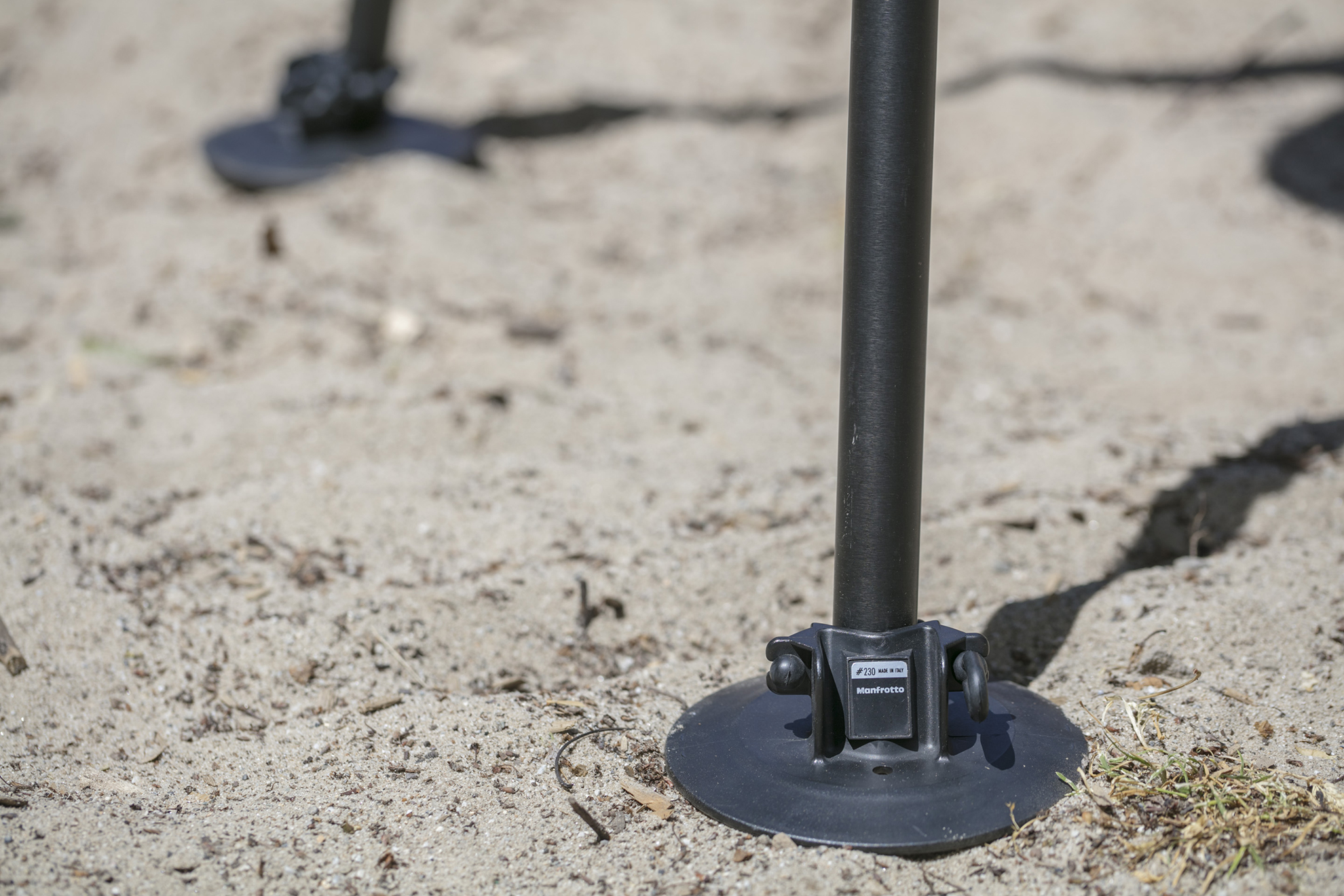 Another specialized accessory for your tripod is Manfrotto’s “snow/sand shoes” for your tripod legs. These will provide more stability for tripods placed on soft surfaces, like sand, loose dirt, and so on.

If you’re shooting on solid dirt or grass, consider using tent stakes to secure your tripod legs from accidental bumping. If you’re shooting critical alignment series such as time-lapses or using an astronomical equatorial head (that requires precise alignment with the North Star at night) you will soon realize the importance of this step. To be extra safe, consider using two stakes per leg. Tent stakes are available at any sporting goods store.

If you have questions you'd like Dave and Ken to address in an upcoming article, email them at: info@theeclipseguys.com.

Planning Ahead for a Successful Solar Eclipse Shoot

Photographic Exposure of a Solar Eclipse