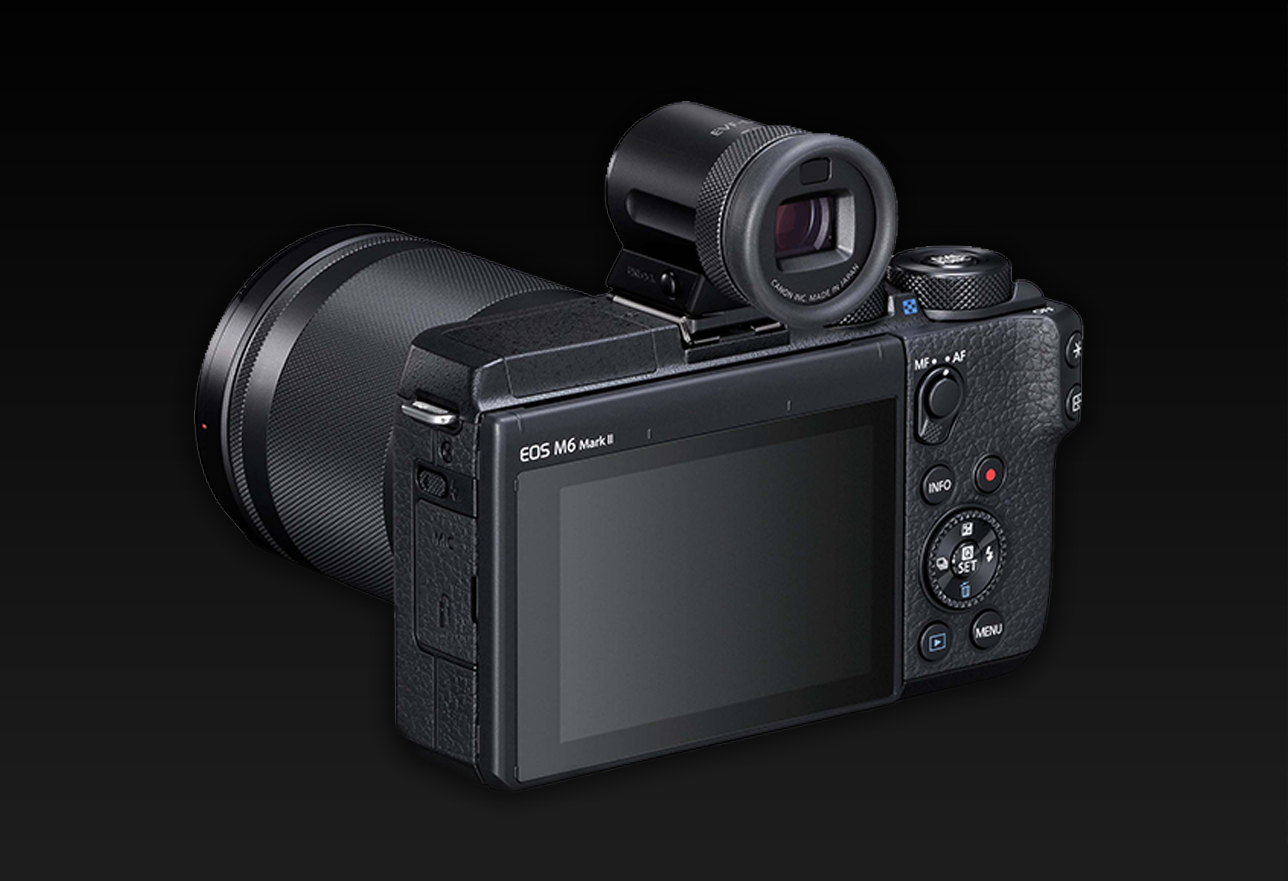 Canon’s EOS M-series provides both an entry point for the first-time photographer, and a compact alternative for the advanced enthusiast or even professional. With a dedicated series of compact EF-M lenses, and ability to attach nearly any Canon EF or EF-S lens from the digital SLR line (via the optional Lens Mount Adapter EF–EOS M), the EOS M system is Canon’s lightweight and portable answer for a variety of potential users. 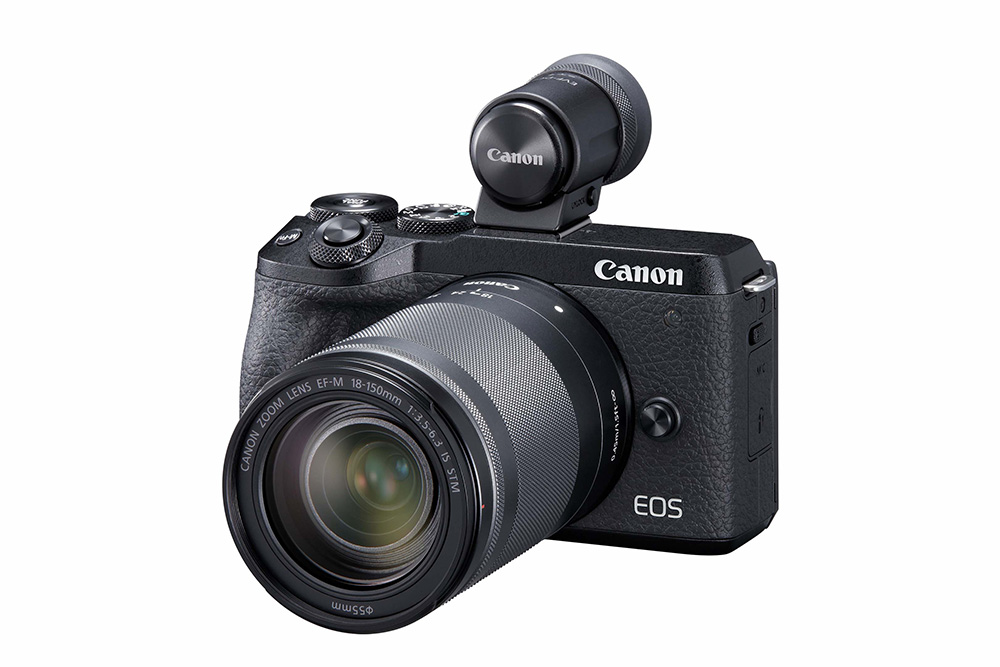 The EOS M6 Mark II, with its available electronic viewfinder EVF-DC2 attached. As explained below, in the US market, M6 Mark II cameras purchased in kit form with either EF-M standard zoom lens will include the EVF-DC2 at no additional charge.

The introduction of the Canon EOS M6 Mark II brings new levels of performance and video capabilities to this mirrorless camera line, and we’ll shed some light on some of the important highlights of this camera in this article. 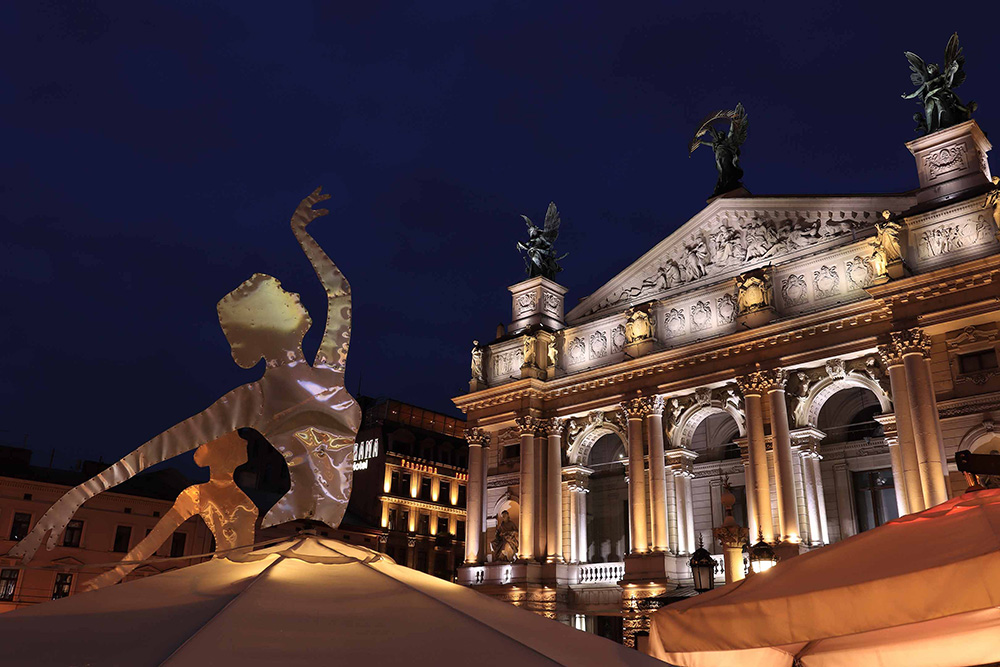 One of the attractions of mirrorless camera design is compactness, and the Canon EOS M6 Mark II does not disappoint. For both the casual photographer and the experienced DSLR owner, it’s an excellent camera for travel photos and video — and, with an optional mount adapter, it accepts the Canon’s EF and EF-S lenses that DSLR owners already own.

Equipped with any of the EF-M lenses, this is a great alternative to a DSLR or full-frame mirrorless camera for travel. Standard zooms in the series:

In fact, a key market for the EOS M6 Mark II is anticipated to be experienced DSLR users, who want a compact yet flexible, interchangeable lens alternative for travel and other situations. USA customers who buy the EOS M6 Mark II in kit form, with either the EF-M 15–45mm or EF-M 18–150mm lens factory-packed in the box, will get Canon’s accessory EVF-DC2 finder also packed in the box, at no extra charge. This compact electronic viewfinder attaches directly to the camera’s hot shoe, and brings eye-level operation at no additional cost to the M6 Mark II photographer.

Touch-and-drag AF is possible when the EVF is attached and operating, allowing users to freely move an active AF point or area by using the touch-screen capability of the LCD monitor — while looking through the viewfinder. 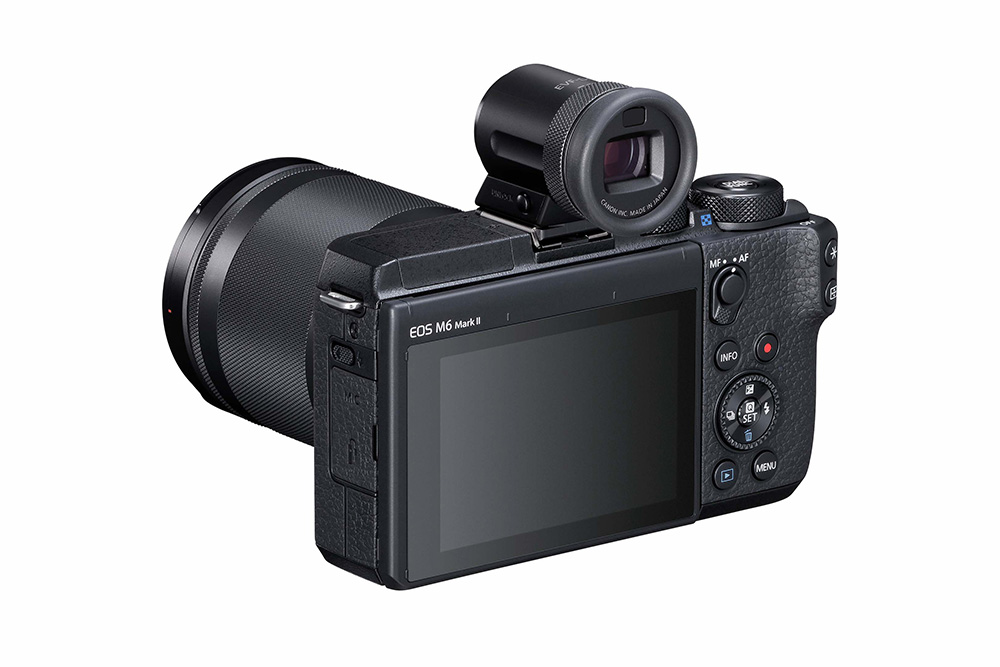 The detachable electronic, Canon eye-level viewfinder EVF-DC2 is included with EOS M6 Mark II cameras, purchased in kit form and packed with either EF-M standard zoom lens (explained directly below). When attached, Touch-and-Drag AF becomes available, so AF points or zones can be quickly manually moved around the frame by simply dragging the user’s thumb across the surface of the touch-sensitive LCD monitor

For clarity, here is how the EOS M6 Mark II will be sold in the US market:

Please check with your dealer for information on EVF availability in other sales regions.

The EOS M6 Mark II’s APS-C size image sensor sees a jump from 24.2 million pixels (on the previous EOS M6 model) to 32.5 million effective pixels on the M6 Mark II. More than ever, this is a compact camera that can handle large printed output, and other applications that require high levels of image detail. 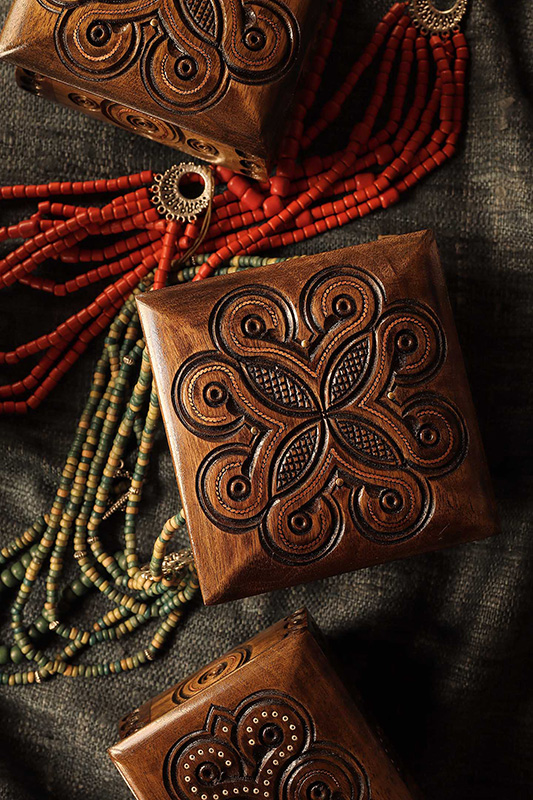 Outstanding image detail, from an APS-C size image sensor, is possible with the EOS M6 Mark II. More than ever, it’s a great choice for landscape, close-up work, and other challenging situations where photographers want to capture extremely fine subject detail.

The 32.5 MP files also allow a substantial amount of cropping, while maintaining sufficient detail and resolution for many applications.

Equipped with Canon’s DIGIC 8 processor and a completely new CMOS imaging sensor, another benefit is improved control of noise in still images — compare the noise in the background areas of these two highly cropped images, taken at ISO 3200, with the EOS M6 Mark II and the previous-generation EOS M6 cameras. 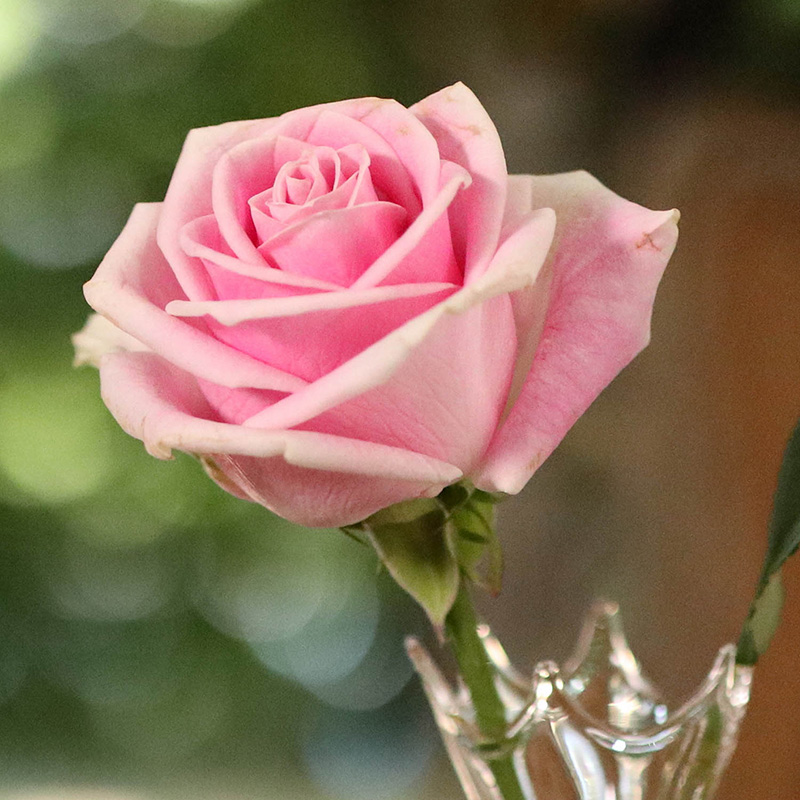 Shooting speed for still images is also dramatically increased. Even though its 32.5 million pixel files are substantially larger than on the previous M6 camera, the EOS M6 Mark II can now shoot continuous images at up to 14 fps — at full resolution, including RAW images — with continuous Servo AF active, using the camera’s mechanical shutter. 14 fps is possible at the camera’s “Continuous H+” Drive setting, accessible in the 1st red Shooting Menu screen.

Even more impressive to some users will be its RAW Burst mode, a first for Canon mirrorless cameras. RAW Burst uses the camera’s electronic shutter to shoot still images at up to 30 frames per second, and can record as many as 80 total frames in a row. Incredibly, this can work with Servo AF active, to follow-focus on moving subjects.

A few specifics about RAW Burst mode on the EOS M6 Mark II:

Mechanical shutter operation is the camera’s default setting, and will allow continuous shooting in any exposure mode, up to 14 fps in the camera’s Continuous High+ Drive mode setting.

Electronic shutter operation changes how images are recorded, and instead of shutter blades controlling exposure time, the CMOS image sensor itself acts as its own shutter, scanning the entire height of the image sensor to expose it at shutter speeds set by the camera or the photographer.

When you can pick your moment and fire one shot at a time (single-frame advance), the electronic shutter in the EOS M6 Mark II allows shooting at speeds up to a remarkable 1/16,000th of a second. It’s not only great for freezing action, as shown in this picture captured with the EF-M 32mm f/1.4 lens, but a great option for using wide lens apertures in bright lighting conditions.

Unlike many previous EOS M-series cameras, the EOS M6 Mark II now has an AF/MF lever prominently positioned at the user’s right thumb, allowing near-instant changes to or from manual focus operation. Manual focus is aided by user-selectable Focus Peaking, allowing users to see the relative state of sharpness across the entire frame.

For the first time in Canon’s EOS M-series cameras, changing from autofocus to manual focus can be done via a switch on the exterior of the camera. Located next to the LCD monitor, on the back of the camera, the EOS M6 Mark II’s AF/MF switch makes it extremely convenient to access features like Manual Focus Peaking or Magnification, in either the electronic viewfinder or on the LCD monitor. And the unmarked central button functions as an AF-ON button, for back-button AF — but it can be easily customized, in the camera’s Custom Functions menu.

Another cool focus feature — any of several buttons on the camera can be customized, so that when pressed, a 5x or 10x magnified view of the area surrounding the active AF point appears. This makes it a lot easier to quickly ascertain precise sharpness, during both manual and autofocus.

Finally, there’s a central AF-ON button at the AF/MF switch. Using the Custom Controls menu on the camera, it’s a simple matter to remove AF activation from the shutter button, and then via the AF-ON button, you have classic “back-button AF” activation. And, this AF-ON button can be quickly customized for any of 39 possible functions, aside from AF activation.

New AF features and performance levels are now possible with the M6 Mark II camera. These include…

The Canon EOS M6 Mark II is a robust yet very compact interchangeable-lens alternative to DSLRs and even full-frame mirrorless cameras. Its video features are outstanding — we’ve outlined them in a separate on-line article. And as a still camera, we repeat that this is simultaneously a great way for the first-time interchangeable lens camera buyer to invest, as well as a great second, very compact camera system for the committed photographer who may normally work with larger DSLRs. Either way, the M6 Mark II forms a great travel camera, and its performance (up to 14 fps, at its full 32.5 million pixel resolution) suddenly opens it to more demanding still-image applications.

Image quality from its APS-C size sensor is excellent, and 32.5 million pixels makes it (along with the EOS 90D DSLR camera) the highest pixel resolution to date for Canon EOS cameras with APS-C size sensors, as of August, 2019. This translates into excellent fine detail, and a camera that’s well-suited for large prints.

AF capabilities, including its Eye Detect AF, combine with its brisk performance to make the M6 Mark II an excellent answer for challenging still-image situations. On top of that, an especially enticing factor for the current DLSR shooter is that the camera is compatible with all Canon EF and EF-S lenses, via an optional Canon lens mount adapter, as well as Canon EX- and EL-series speedlites.

Whether it’s considered a very compact multi-media option for stills and video, or a high-performance and compact option for stills, EOS M6 Mark II is a great new mirrorless camera for many different types of photographers. Factor in the inclusion of an electronic eye-level viewfinder if the camera is purchased in kit form with either of Canon’s standard EF-M zoom lenses (in the USA market), and you have a flexible and compelling choice for different types of photographers.